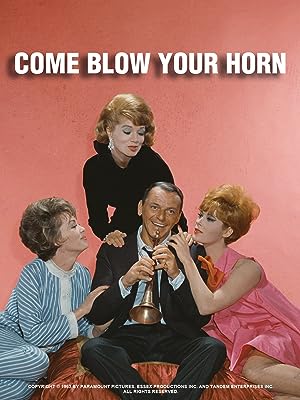 (192)
6.11 h 51 min196313+
A free-swinging playboy introduces his hero-worshipping younger brother to the delights of high living in this adaption of Neil Simon's Broadway comedy about a Jewish family in New York City.

saxpistolsReviewed in the United States on July 30, 2018
4.0 out of 5 stars
An oldie, but a goodie!
Verified purchase
This is a fun film from the year I was born. I've lost my VHS version and wanted to replace with digital. I had the honor of playing Alan Baker in a community theater production of this Niel Simon comedy. The film is fairly close to the stage version, but not exactly. Thank goodness the pencil scene is still in the movie version.The copy I received had a great copy of the original artwork and the disc inside was good, but obviously not commercially produced. When I asked about the legality of this copy, I was told that the movie is now public domain and therefore perfectly legal to reproduce onto re-writable discs like the one I received. I mention that, only because I saw something different than what I expected when I opened the very nice case it came in and also when I put it in the DVD player. The movie is all on there just fine, though. Aside from two very brief audio problems, it's perfect, and I'm happy with my purchase.

Sonlit Reviewed in the United States on February 11, 2012
4.0 out of 5 stars
Charming Sinatra and Silly Women
Verified purchase
I love Sinatra in comedies because he is such a natural. Between his innocent blue eyes, sunken demeanor and serious expression he exudes a certain 'little boy lost' charm. He could have done slapstick but that was not his era. The women in his comedies are often gorgeous and silly with usually just one serious female lead...the one that intends to land him.

In this role, Sinatra is the eldest son raised in a strict Jewish home with a typical doting mother and overly emotional father. The parents are very key in this film and both absolutely SHINE in their appointed roles. Sinatra is working in his fathers plastic fruit business and maintaining a well appointed apartment that has been literally, given him by one of his female suitors. He is too proud to be a kept man but he is not at all opposed to being tenderly coddled by his various love interests. He will prove to have many female suitors in this role, all from various walks of life - each interesting and unique and some, noted actresses whose day was yet to come.

Sinatra may think he has the wool pulled over his strict fathers eyes but he doesn't....not in the least. The rows between him and his father are increasingly noisy but harmless and shot through with deep family concern. All 'dad' really wants is for his sons to be married and begin raising families. As the eldest, Sinatra is getting up there in years - approaching thirty no doubt in this role but his adoring younger brother wants nothing more than to emulate big brother - in all ways. Little brother wants no part of the family fruits, literally and moves in with big brother who welcomes him with open arms, taking care to show him the ropes of life in the big city. As Sinatra moves through the process, little brother learns more from watching big brother than listening and begins to take over his somewhat famous brothers womanizing bachelor role.

Needless to say, this creates a growing tension between the two brothers that finally erupts in a wild party that little brother throws in big brothers bachelor pad. Big brother walks in on it and in fatherly fashion, rails at little brother and disciplines him before his new crowd of friends. Meanwhile, Sinatras serious love interest has forced him to make a choice; marriage or immorally live together. The pressure from all sides leads not to an explosive ending but a realization....what Sinatra really wants is a simple life with one girl, the right girl. The ending falls together beautifully when his parents arrive (after their own quarrel over the boys has sent them both spinning in different directions) to meet Sinatra and new WIFE. Little brother meanwhile, steps into big brothers old role, old apartment and womanizing lifestyle...with hopefully some new lessons learned.

Not a movie that directly reflects quality lifestyle values despite no actual sexual scenes, nudity or heavy use of foul language...but a lesson is learned in the film that does reinforce the importance of committed love and of family ties.

stamps16Reviewed in the United States on June 14, 2021
5.0 out of 5 stars
A great way to unwind!
Verified purchase
I love Frank Sinatra films of this 60's era. Clever film with Sinatra's swinging lifestyle being interrupted by his naïve younger brother moving in to break free. Throw in a couple of traditional parents and a serious woman and complications ensure. You will certainly know the story ending but should enjoy the ride. A great way to unwind.

david ericksonReviewed in the United States on January 4, 2014
4.0 out of 5 stars
Jill St. John and Barbara Rush
Verified purchase
Sinatra has made himself a most delicious sandwich with Jill and Barbara (not to mentikon several part-timers including "Connie"(Phyllis Mcguire) who happens to be married to Dan Blocker (all 300 pounds and stetson hat of him)
Tony Bill plays Frank's younger brother who wants to emulate his playboy brother. I find this casting was a mistake but it didn't harm the pleasure of watching Frank and his various harem cavort...you have Jill St. John (dumb as a box of rocks) Barbara Rush (looking for something other than an affair) and other ladies involving themselves to the point of Dan Blocker cold-cocking Frank.
Adding to the mix are Frank and his brother's domineering father (Lee J. Cobb) much shouting and ranting and their mother trying to make peace and you have a convoluted, funny and entertaining movie.
3 people found this helpful

sparkleReviewed in the United States on March 8, 2014
5.0 out of 5 stars
A great parody on Jewish family life
Verified purchase
I forgot how good these actors were at portraying the behaviors that were in the public consciousness about Jewish mamas and papas in that time of our society. Had me laughing so hard, it had to be good for my immune system. Frank Sinatra portrayed his persona as a 'swinging bachelor' and the women, as the 50's sex symbol stereotype, including being stupid too. Glad we got that changed around. If you want a good look at the 50's and how we looked and dressed, and our expectations, this is a great movie. In fact I think I'm going to buy it so I can watch it a lot. There is also a surprise cameo, but I'm not going to give it away.
One person found this helpful

Amazon CustomerReviewed in the United States on July 15, 2020
5.0 out of 5 stars
good Frank Sinatra movie
Verified purchase
Good fun this Sinatra movie, light and easy going is frank and Actor Producer Tony Bill, worth having in your collection, as well ***** four stars to the seller!

Amazon CustomerReviewed in the United States on February 16, 2021
5.0 out of 5 stars
What a cast.
Verified purchase
The cast alone should be enough to make the purchase. Lee J Cobb is the perfect foil for Sinatra’s cavalier character. Yes, the dialogue wouldn’t pass today’s PC, but it still brings a smile.
See all reviews
Back to top
Get to Know Us
Make Money with Us
Amazon Payment Products
Let Us Help You
EnglishChoose a language for shopping. United StatesChoose a country/region for shopping.
© 1996-2022, Amazon.com, Inc. or its affiliates