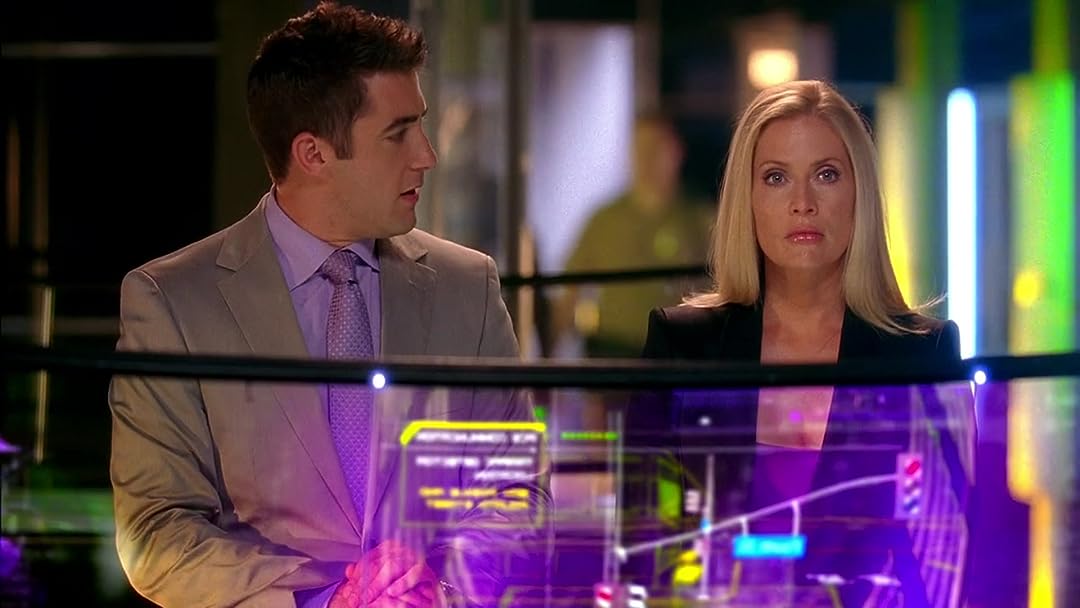 Roman85Reviewed in the United States on February 8, 2010
5.0 out of 5 stars
Like Season 6, this one is even better...probably's "Miami's" best
Verified purchase
Very few shows in my opinion are good once they hit their sixth or seventh year, however, that is not the case here, like "Star Trek" Next Generation" this show only gets better as it goes on & this season like Season 6 are probably the best seasons of this show, "C.S.I.Miami" got off to a slow start when it began in 2002, but it has since gotten better, despite David Caruso's thinning hair line, the scenery gets better & better, this is without a doubt one of the most beautifully shot shows on T.V., & this Season 7 picks up exactly where Season 6 ended where Horatio appears to have been shot, we quickly learn that it was all staged in an attempt to get Sarius(Kim Koates), a despicable villian, to come out of hiding, this is a guy you just love to hate, & the plan works, Elizabeth Berkley returns as Horatio's ex, & currently Sarias' new love as she sets him up to be taken down by Horatio, with this subplot wrapped up, the show then takes on some new story arcs, the "Miami" team soon attract the attention of Russian mobsters who keep tabs on them, Andrew Divoff who has played some memorable villians over the years("Lost" "Another 48 Hours") does so again here as a Russian mobster, who irratates & mocks Horatio much like Sarias, as the team try to connect him to a series of unsolved crimes, a romance blossoms between Caleigh(Emily Proctor) who always to me seemed one-dimensional & Eric(Adam Rodriguez) where Eric learns his estranged father may be tied to these mobsters, won't give to much away, because this season is full of surprises, some may compare it to "Miami Vice" of the 80's because of Caruso's Horatio always being somewhat trigger happy unlike his counter-parts Grissom(Las Vegas) or Mac Taylor(C.S.I.NY), well, I don't know, Mac(Gary Sinise) seems to be a bit trigger happy too on (C.S.I."NY"), but then again I don't think this is a bad thing, people who complain about this obviously have a bone to pick with Caruso it seems, I can't believe people are still ticked at him over "NYPD Blue", like he was the first T.V. star to bail on a hit show, (please!!!), William Peterson just did the same thing on the original "C.S.I.", yes, Caruso might have been a bit arrogant back in the early 90's, but he hasn't done that here, we all make mistakes, anyway this Season is a must have for any "C.S.I. Miami" fan, it is my favorite season of "C.S.I. Miami".
4 people found this helpful

House BoyReviewed in the United States on December 14, 2008
4.0 out of 5 stars
CSI:Miami Video On Demand Version
Verified purchase
Video On Demand is the coming thing and will likely replace DVD's, except for Blue Ray. Unfortunately, there are some quirky issues with Amazon Video On Demand that need to be fixed. They are:

1. You are not required to log in to download a video, but your credit card is charged. That appears to have potential for a security breach.
2. The Unbox software is flaky. It plays the videos just fine, but it has some navigational quirks that will frustrate unsophisticated computer users.
3. There is no apparent way to call or e-mail customer support if you are having trouble with Video On Demand. You can read the FAQ's and provide feedback, but there seems to be no way to contact a live individual if your video's are not downloading or playing correctly.

Having said that, I would rate the service as good. I have my computer connected directly to my 42" Phillips Plasma TV via a HDMI cable. The quality of the videos comes out on my TV as 720i although my TV is a 1080i. Not quite DVD quality, but very close. The downloaded videos play seamlessly from start to finish and the sound is excellent. Some of the colors in CSI: Miami are not quite true compared to viewing the HD broadcast version of the episode. CSI: NY seems to come out clearer and colors are more true.

The VOD TV episodes have the advantage of no commercials and the movies don't waste your time with previews at the start. They also have no bonus material.

Download time is long even with a fast connection. About 1 GB of space is required per hour of video. I have not tried viewing on-line, but I suspect that buffering delays would occur.

The price of VOD movie rentals is somewhat hefty compared to Redbox, but VOD is very convenient and you have 30 days to start viewing your rental movie before it locks. Once you start viewing it, it will lock after 24 hours.

Overall, I really like Amazon Video On Demand, but they need to jump on fixing those problems listed at the start.

Sammy MadisonReviewed in the United States on December 6, 2011
5.0 out of 5 stars
Episodes 701 through 725
Verified purchase
I was looking for a specific episode, and guessed (incorrectly) that this was the season that included that episode. So here is a list of the episodes included in this set:

I'm not terribly disappointed by my mistake in ordering the wrong season, because this is an entertaining series and the set seems to be of better quality than most of the tv series I have ordered on dvd. Some series don't come close-captioned, and when they don't, I am disappointed. This set is closed-captioned, for anyone else who finds this important.
5 people found this helpful

William BilyeuReviewed in the United States on February 1, 2020
5.0 out of 5 stars
CSI: Miami collection completion
Verified purchase
I ordered this to complete my collection of the CSI: Miami series. The DVD set played perfectly and completed my set for my Library.
One person found this helpful

Wunder OneReviewed in the United States on January 10, 2010
3.0 out of 5 stars
Who is the intended audience?
Verified purchase
I used to enjoy this series, but, with Season 7, the flaws which were hidden away in the series have come perilously close to eclipsing the enjoyment factor. Primary wondering: Who is the intended audience? The series used to have some level of intelligence about it, but is steadily sliding into the vast void of clichés.

** All women must be of the cookie cutter variety. Stiletto heels? For crime scenes? Come on! It appears one plastic surgeon was contracted for the whole series. Make-up (and tons of it!) and hair styles the same. Beaches and pools filled with hordes of the same few bodies, done a hundred times over. Older lead guy can only be in relationships with pitiful, and/or neurotic, anorexic youngsters. This pretty much demeans everyone -- audience, actors, writers, producers.
** Appearance of Woodwork Family. Yawn. When shows are losing their edge, all of a sudden the previously non-existent family appears out of the woodwork. The characters are written in the absence of creativity, rather than as a part of creativity, and are pure filler material. About as interesting as packaging, except they stay around a lot, lot longer. Very long.
** Bad guys are pure evil. Granted, this particular problem runs throughout almost all TV series having to do with crime, so can't put this on this series alone. But it would be great to see some bad guys elevated to actually being interesting enough to do something beside be evil comic book villains. Saris, the Russian mobster du jour, etc., are so one-dimensional and boring, the best to hope for is they die (without coming back from the dead) and the show moves on.
** One story per episode. The series used carry its weight, by having the different CSIs working on different crimes, creating an energetic and interesting interweave of plots and characters. Now it is one story per episode ... or a story with an ongoing pure evil bad guy sprinkled on top.

~~ I like the Horatio Caine persona. Gutsy David Caruso creates a wonderfully individualized character. But Caine is so Caine I believe one would need to like the weird character, with his sideways crabwalk and strange speech cadence, to enjoy the show. Even Caine had not much to go on this season. Too much of the prefab family, too little substance.
~~ Emily Procter is terrific on a bad day. And she has no bad days. Procter's Calleigh Duquesne is an excellently drawn character, pulled off with a surprising range of thought and emotions, with just the right touch of sly humor.
~~ I enjoy the other regular characters just fine, particularly Detective Tripp (Rex Linn). But another reviewer said it for me: Bring back Dr. Alexx Woods (Khandi Alexander)!
15 people found this helpful

JACQUELINE RATNER-STAUBERReviewed in the United States on April 30, 2018
5.0 out of 5 stars
CRIME/JUSTICE.. IN SCRIPT AFTER SCRIPT THAT CAPTIVATES THE INTELLIGENT MIND!
Verified purchase
ONLY TV SHOW I EVER BOUGHT TO PLAY!...GREAT STORY LINES...ACTING..CHARACTERS...MUSIC..CINEMATOGRAPHY...DIRECTING ..ETC
ALSO, ONLY SHOW I WATCH REGULARLY..BESIDES THE NEWS!...STATE OF THE ART BRILLIANT LAB SCENES AND CRIME SOLVING TOO!!!

Cliente AmazonReviewed in the United States on October 21, 2019
5.0 out of 5 stars
Modern and dynamic tv series.
Verified purchase
Modern and dynamic tv series. Excellent arguments and wonderful performance of its protagonists. The color image quality is excellent, with excellent resolution. The language option is an added value. I am satisfied with the purchase. I recommend it perfectly.

IRISReviewed in the United States on February 10, 2021
5.0 out of 5 stars
LOVE ALL CSI:MIAMI
Verified purchase
THANKS I WILL ENJOY THIS SEASON AS MUCH AS I HAVE ENJOYED OVER AN EVER ALL THE OTHER SEASONS. IT WAS IN GOOD CONDITION.
See all reviews
Back to top
Get to Know Us
Make Money with Us
Amazon Payment Products
Let Us Help You
EnglishChoose a language for shopping. United StatesChoose a country/region for shopping.
© 1996-2021, Amazon.com, Inc. or its affiliates