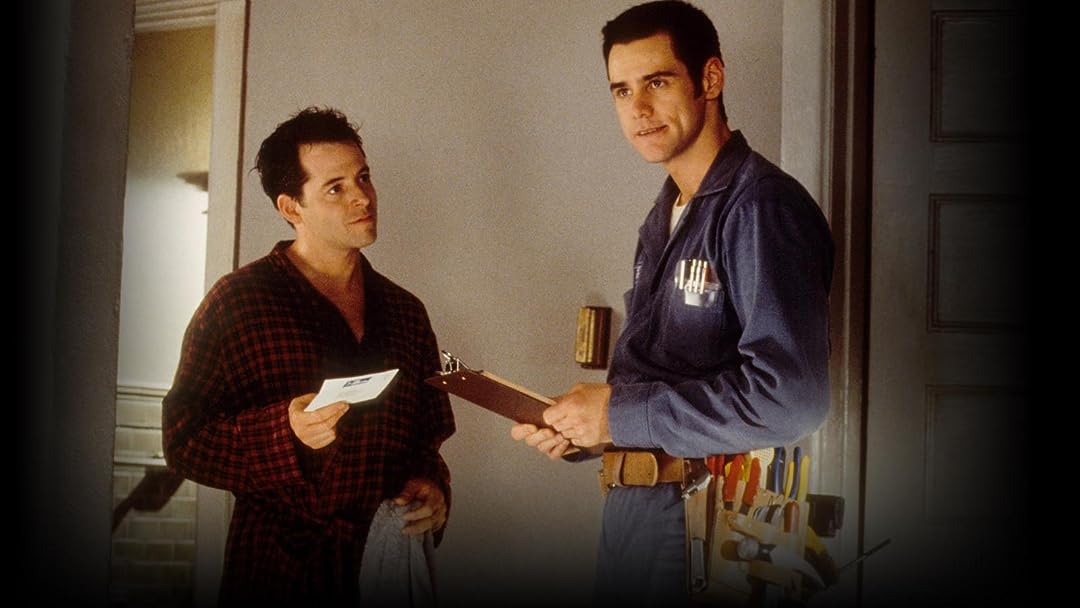 (2,680)
6.11 h 35 min1996X-RayPG-13
He's a one-man horror show - the friend who won't go away! A man regrets accepting an offer of a few free movie channels from a wacked-out cable installer. Directed by Ben Stiller, with Jack Black, George Segal.

Kathy DReviewed in the United States on May 19, 2020
1.0 out of 5 stars
Turn from the dark side
Verified purchase
Sad commentary on the state of America, and that was almost 25 years ago. The movie is more disturbing then funny, but I guess it’s an informative tool that can teach those who’ve had a relatively normal life that you should be careful who you open your door to. It’s also a commentary on sticking to your morals no matter how friendly someone appears to be. They can surely turn on you when you least expect it! As someone who’s had a long career in the mental health field, I can sadly say that my exposure to people like this has burned me out. A piece of advice to cure most mental problems...pick up your Bible and apply it to your own life. Don’t stray from God or His love, and you’ll find yourself doing just fine. :)
27 people found this helpful

L. D.HReviewed in the United States on January 9, 2018
5.0 out of 5 stars
It was great then, & is still great now.
Verified purchase
Outstanding film. Always was and still holds up as a comic psychological thriller.
I think some people get confused by the many moods of the film and the obsession
of a male character to another male character.
I always liked that in the end the premise is simple:
Be a good mother because if you don't and your child feels abandoned by you because they are left
alone to hurt and then receive stimuli of violence and obsession, you will have trouble!
Just kidding, that is a bit simplistic, but I always thought it was clever that the child (Carey) is left alone
at night by a partying mother.
Television is his only friend, so while he is in emotional agony he is switching back & forth between violence and a stalker film (Play Misty for me -A truly great movie) and voila! he ends up being a lonely obsessive stalker!
So many funny things in this, especially Broderick's straight man routine which he has always been the best at (much like his unassuming character in Election, which would be a great double feature with Cable Guy btw!)
Great soundtrack as well.
You can palpably feel Carey's mania & ferocity while watching, it's fantastic.

GSDReviewed in the United States on May 26, 2020
1.0 out of 5 stars
Astonishingly bad movie with one of my comedic favorite actors
Verified purchase
I have watched this three times now over the years thinking that I must be missing something and hoping to discover the secret to make this movie funny. I can say there is no secret, it is just a bad movie. I love both main characters and their films like Truman Show, Dumb and Dumber, Ace Ventura, and Ferris Bueller's Day Off are all on my top 10 greatest comedies of all time. This was just a dud. Broderick's character is so boring it is painful and the entire story could have been boiled down to a 10 minute short. It was nothing but fluff of progressively doing the same thing only worse for an hour. Sadly, the only part of the story that caught my attention was the sub plot of Ben Stiller's character's trial which unfortunately you never learn the fate of. Sad when a total of 3 minutes of sub plot are more interesting and funny than the other 90 minutes. Save your time and God forbid, do not buy this movie.
7 people found this helpful

EasyReviewed in the United States on March 25, 2020
5.0 out of 5 stars
This movie is underrated.
Verified purchase
Many dynamic angles you can approach this story, but at its core, it is funny and entertaining. Enjoy the ride! (On the information SUPER-HIGHWAY!) xD
10 people found this helpful

JibsReviewed in the United States on April 9, 2019
5.0 out of 5 stars
What a good one!
Verified purchase
How did I not know about this movie sooner? My boyfriend suggested it one night and I immediately hated myself for not have watched this sooner. HILARIOUS! You gotta see this!
11 people found this helpful

Die NemesisReviewed in the United States on June 7, 2021
5.0 out of 5 stars
Stiller/ Carrey Gold
Verified purchase
Pretty decent transfer with great sound. All the original great special features. Really wanted the anniversary edition but this is not bad. As far as the movie itself goes...

Well I was 11 in 96' when it came out and didn't really appreciate the humor until High School. For some reason people don't like this film? I really connect with it. It's more than a dark comedy. It's a very much needed film based on loneliness and obsession, it also has a fantastic soundtrack! One of my favorites.
One person found this helpful

sp_newsReviewed in the United States on June 15, 2020
4.0 out of 5 stars
Not what I expected
Verified purchase
I thought the movie was good, but it was not what I expected. I thought I was going to see a funny, whacky film because Jim Carrey was in it with Ben Stiller directing. It was very funny in the beginning, but then turned really dark. However, I did find it entertaining with lots of cameos from several famous comedic actors. It's worth watching but be prepared for a very dark comedy.
4 people found this helpful

Amazon CustomerReviewed in the United States on May 15, 2020
5.0 out of 5 stars
Fantastic Dark Comedy so greatly overlooked, Jim Carrey's top 3 best movies.
Verified purchase
Not a moronic slapstick comedy, very well written (re-write Judd Apatow, who was robbed of a writing credit by the WGA)
Masterful Dark Comedy/Thriller and excellent direction from Ben Stiller.

Matthew Broderick and Jim Carrey are great together.

This is not "Mask" or "Ace Ventura" , don't be expecting that type of movie.
4 people found this helpful
See all reviews
Back to top
Get to Know Us
Make Money with Us
Amazon Payment Products
Let Us Help You
EnglishChoose a language for shopping. United StatesChoose a country/region for shopping.
© 1996-2022, Amazon.com, Inc. or its affiliates