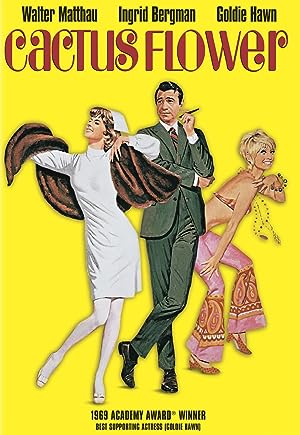 Yiannis PReviewed in the United States on December 18, 2018
3.0 out of 5 stars
A Big Disappointment
Verified purchase
Hard to imagine a movie getting so painfully dated. The whole cutesy mix up of all permutations of pairings is both predictable in its resolution and totally contrived. Three of my favorite actors (Ingrid Bergman, Walter Matthau, and Goldie Hawn (who surprisingly got an Oscar for this unchallenging role) provide mediocre performances in an uninspired script better suited for the theater than a film. Sorry I watched it. 2 1/2 stars
9 people found this helpful

TulliaReviewed in the United States on October 13, 2019
5.0 out of 5 stars
The Cactus Flower Saves The Day
Verified purchase
The beautiful and talented Ingrid Bergman and the big-eyed Goldie Hawn in a silly comedy make for a great team. Add to that the outstanding Walter Matthau and you have a wonderful film.

There's lots of mishaps, and nonsense in this film. But it's funny and worth the watch.

The Cactus Flower at the end is a saving grace

David M.Reviewed in the United States on August 7, 2019
5.0 out of 5 stars
Funny, frequently quite hilarious!
Verified purchase
I viewed this film as a Fresman in High School when it first came out. And now, nearly 50 years later, I've re-watched it for the first time since. It's even FUNNIER now and though styles and music change, the witty script by I.A.L. Diamond has retained it's ability to make one laugh-out-loud at some of the situations and dialogue. For me, the true star of the film is Ingrid Bergman and Walter Matthau. Bergman has nearly all the best lines, and she's an expert at the delivery of those lines. An enjoyable evening spent with this film!
4 people found this helpful

David W. CarpenterReviewed in the United States on November 26, 2018
5.0 out of 5 stars
Better Than Expected!
Verified purchase
Cactus Flower is a fine film. The script, based on the Broadway play of the same name which was produced by David Merrick and starred Lauren Bacall, is excellent. All of the actors are strong. This was Goldie Hawn's first film role. She was riding high at the time as perhaps the most popular cast member of Laugh-In, one of the top-rated shows on TV. She was the ditzy blond who stole the show, but people apparently were not sure she would translate well to the big screen. She did just fine. Walter Matthau and Ingrid Bergman were also in top form.

This film is more than just a period piece, but it does have tasty little dollops of 1969 pop culture flavor, including: the albums on the wall of Stereo Heaven, where Goldie's character works; the posters outside the movie theater for Zeffirelli's Romeo and Juliet and if....; and, the surprising number of instrumental lounge versions of Monkees songs that play in the club.

But, again, it is the engaging acting and the fun, well-written storyline that have allowed this film to hold up so well for half a century. Recommended.
3 people found this helpful

GypsiReviewed in the United States on September 30, 2017
5.0 out of 5 stars
Well Worth Watching
Verified purchase
Womanizing Dr. Julian Winston (Walter Matthau) has told his new girlfriend, Toni (Goldie Hawn) that he is married, to prevent the relationship from getting serious. He decides he does want to marry Toni, and tells her that he will get a divorce, but she insists on meeting his wife first. He persuades his longtime nurse Stephanie (Ingrid Bergman) to pretend to be his wife. Stephanie and Toni meet, but things don't turn out just the way Julian had expected.

This romantic comedy is pure fun, with great lines and perfect delivery from the two veteran actors. Goldie Hawn's Oscar winning debut performance is a true delight. The sets and costumes looked wonderful, and the supporting cast of Jack Weston, Rick Lenz, Vito Scotti, and Irene Hervey added greatly to the overall experience. This is a film well worth watching.
5 people found this helpful

GinaReviewed in the United States on July 25, 2019
5.0 out of 5 stars
Funny, great script, great acting and directing
Verified purchase
I had no idea how much I would enjoy this film, but it had me laughing and engaged throughout. The script is excellent: it was witty without being self-conscious and fit with the characters. The plot unfolded beautifully - you didn't know what was going to happen right away, but then things started to become clear. The acting was wonderful and the women were featured as much as the men (they got some of the best lines). Hawn won an Oscar for best supporting actress, but, really, everyone was a "supporting" actor or actress. The cast worked beautifully together and each actor received a chance to shine. Highly recommended!
One person found this helpful

LJSReviewed in the United States on April 2, 2019
5.0 out of 5 stars
Ingrid Bergman in a comedy
Verified purchase
This is a fun film and well worth watching just to see Ingrid Bergman handle comedy so well; Bergman and Jack Weston are particularly great in their scenes together. The only problem is that Miss Bergman's face is so beautiful--even in her 50s--that my attention was focused exclusively on her during each of her scenes.
3 people found this helpful