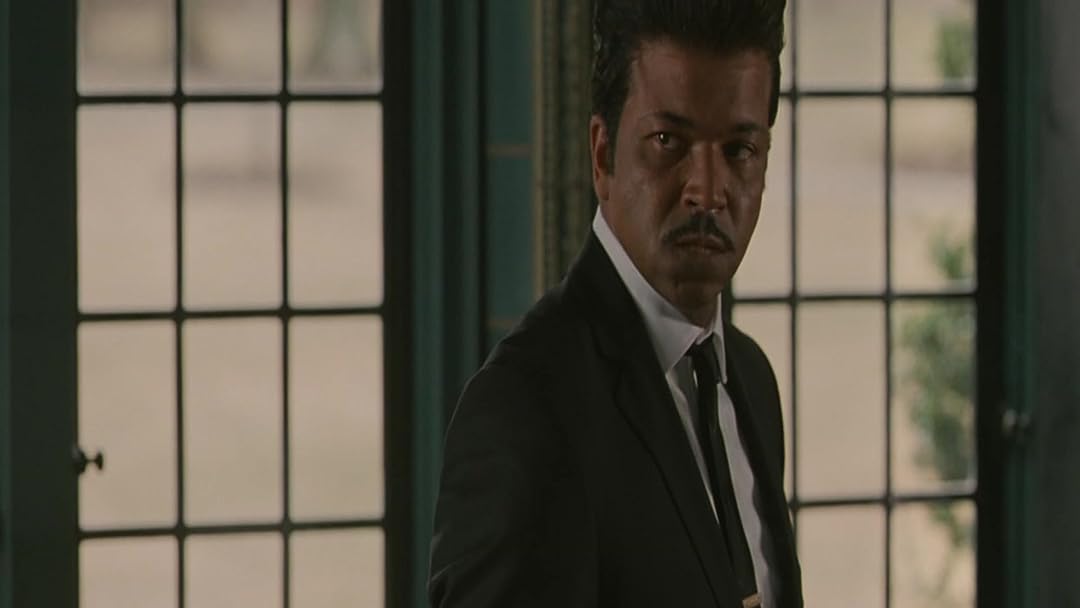 (4,011)
7.01 h 48 min2008X-RayR
In this tale of sex, violence, race and rock and roll in 1950's Chicago, CADILLAC RECORDS follows the exciting but turbulent lives of some of America's musical legends, including Muddy Waters, Leonard Chess, Little Walter and Howlin' Wolf, Etta James and Chuck Berry.

joel wingReviewed in the United States on March 31, 2020
4.0 out of 5 stars
Great movie about a period in American music history Chicago's Chess Records
Verified purchase
Cadillac Records is loosely based upon the story of Chicago’s Chess Records. The movie gets its name from the fact that the record company used to buy its top artists Cadillacs. Chess was one of America’s leading Blues, Jazz and Soul labels from the 1950s-70s. It was founded by two Jewish immigrants from Poland Leonard and Phil Chess. The movie only includes Leonard Chess played by Adrien Brody. The movie focuses upon how Chess promoted its artists Muddy Waters (Jeffrey Wright), Little Walter (Columbus Short), Etta James (Beyonce), Chuck Berry (Mos Def), and Howlin Wolf (Eamon Walker). Like other labels of that time Chess ran into financial problems and cheated many of its artists. That’s all here in Cadillac Records.

The movie starts with Muddy Waters. One reason why Chess was so successful was because Chicago was the destination for many African Americans who wanted out of the south. Muddy was one of those migrants who left a plantation in Mississippi and headed north for the big city. Chess found plenty of talent like Waters out of that diaspora. Finally, Chess had to put its artists out on tour and get them on the radio that required bribes. Chess also placed the artists basically in debt. They paid them in advance against their future royalties, charged them for recording, etc. This was all part of the music business back then. This is what’s so good about Cadillac Records. It has the artists. It has the music. It has the business. It has their stories. It captures part of American history, although yes, a lot of it is made up but the larger story is true.
C

Jaime ContrerasReviewed in the United States on June 18, 2020
4.0 out of 5 stars
Enjoyable film about those R & B, Blues and Rock N' Roll music factory on southside of Chicago
Verified purchase
First, I am a Blues, R & B and early rock n' roll music fan and I enjoyed this film. Second, I know there were several inaccuracies with the film such as chronological order of events, the omission of the other Chess brother, Phil who was the co-founder and co-owner of Chess Records, the absence of Bo Didley in the film, and the whitewashing of the financial control over the artists by the Chess brothers. Finally, the film itself features wonderful performances by a talented cast of actors and singers. Len Chess (Adrien Brody), Little Walter (Columbus Short), Willie Dixon (Cedric the Entertainer), Howlin' Wolf (Eamonn Walker), Chuck Berry (Mos Def) and Etta James (Beyonce Knowles). The film's sharp and biting screen play was written by tis director, Darnell Martin. Cadillac Records shines a spotlight on the dealings, people, and underbelly of the burgeoning infant music industry of R & B, Blues and Rock n' Roll. The film also brought out the rivalries among the singers, the self-destructive behavior of some of the singers, the free-spending of one, the sexual escapades, the drug and alcohol abuse, and the emotional instability of one. The heart of this film are the relationships, love, care and connections between all these talented people. There was also an innocence that came forward from many of these people. Still, it is a very good film about the Chess Record label (1947 - 1969), the Chicago music scene, and the music industry of that period,
6 people found this helpful

HerbReviewed in the United States on January 12, 2020
5.0 out of 5 stars
History of Chess Records
Verified purchase
Cadillac Records is an incredible film, that creatively follows the lives of Lenny Chess, Muddy Waters, Chuck Berry, Howlin' Wolf, Little Walter, and Etta James. The script is raw, and unassuming, and deals not only with music, but racism, greed, violence, and crime. But, in the scheme of things, it is the true marriage of R&B and Rock 'N' Roll. Why the title Cadillac Records? Well, you'll have to see the film to understand. Rating: A+
6 people found this helpful

Hee Chul KwonReviewed in the United States on August 18, 2016
5.0 out of 5 stars
GREAT MOVIE ABOUT MUSICIANS
Verified purchase
This is the great movie about music business.
First of all, the charactor appears in this movie is just so charming to look at.
Second, the music appears are so lovely to hear. I will listen to them again and again through youtube maybe 1000 times.
Also I should never forget to mention that the music was done by fine composer/ Trumpet player Terence Blanchard a living legend jazz musician.
Adrien Brody you've seen him enough already right? <THE PIANIST><THE GRAND BUDAPEST HOTEL><KING KONG>. He is a great actor.
In this movie he acts as an owner of the record company struggle to make it a great one.
Muddy Waters, Leonard Chess, Little Walter, Howlin' Wolf, Etta James and Chuck Berry. They all are from this company and now are legends. Also appears are Rolling Stones and so on. You will be blow away by their appearence.

Beyoncé Knowles acts sings like a diva and you will never forget her face when you see this movie I mean it.
And Jeffrey Wright acting as Muddy Waters is truely unforgettable.
This movie shows ups and downs of the true great singers as well.
Moments of their times when they are in drugs, going to prison and dissapears from the scene. Coming back with really hard try for come backs.
Because of their skin color, they struggle to be survived from society. Fom cops, from mean guys and from everything.
Love and friendship.
And most of all beautiful development of their true genious music and go all the way to top the chart. Their best moments.
And there are always the leader Adrien Brody acting as Leonard Chess .

The cinematography, the song, the acting, the editing, the production design, there is not a single thing I can criticize about.
It is just perfect.

Two thumps way up and I just couldn't shut down when the credit is rolling at the end.
I wanted more.

Hande ZReviewed in the United States on February 18, 2021
4.0 out of 5 stars
Rock and Roll and the Blues
Verified purchase
It is said that jazz is blues without the lyrics and rock and roll expresses the joy of blues musicians when they realise the goofy side of their music. This movie is a potted history of how jazz turned to blues to rock and roll, and is helps the viewer understand the angsty side as well as the happy side of jazz-blues- early rock and roll era. One hesitates to call it the golden era of that music because that might mislead a reader to think that it was a fabulous era without the poverty, discrimination, jealousy, and raw defiance that were embroiled in the making of a music that today we listen with joy. Watch now, its torrid past so well portrayed by a stellar cast led by Adrien Brody and Beyonce. Yes, this is a biopic of Leonard Chess, Muddy Waters, Little Walter, Chuck Berry, Etta James with cameos by Elvis, and the Rolling Stones.

E. L. MegelReviewed in the United States on September 28, 2018
3.0 out of 5 stars
Great story clumsily told
Verified purchase
I wanted to like Cadillac Records - but ... not so much...
Some good performances - 'specially Mos Def as Chuck Berry, really enjoyed that. Adrian Brody as Leonard Chess ... not so much, but tolerable.

Mostly it's a mess - odd tone - plays so crazily loose with actual history, starting with a middle-aged Alan Lomax showing up to record sharecropper McKinley Morganfield (aka Muddy Waters) in 1947 when Lomax was a youthful 32 ... well it bothered *me* ... then, ostensibly still ca. '47 a women shows up to Leonard Chess's blues club in a 1951 Cadillac. Lot's of that kind of sloppiness ... LOTS. Chuck Berry hears the beach boys "Surfin' USA" before he goes to jail for corrupting the morals of a minor across state lines or whatever - but that came out while he was in jail. Willie Dixon and
Muddy Waters go on their first tour of Europe in '67 but, at least Dixon went in '62 and '64 ... Just lots of stuff like that... and it bothered me ...
Still ... I had fun.

One personal note - at the end, Cedric the entertainer as Wllie Dixon as narrator tells how they sued Chess for back royalties and got paid, and how he's "still gettin' paid, 'cause I wrote all those songs" ... He was smart enough to regain his authorship rights and got publishing too. I noticed this in 1970 when a group called the Chicago Blues Allstars (unrelated to current group of that name) came to the Philly Folk festival. Dixon on bass, Otis Spann, Hubert Sumlin, really All Stars! I got to hang out a bit back stage and I noticed how much better dressed Willie Dixon was than the others - like *big* difference - noticed first with his shoes. He was dressed like a banker, a successful banker. Took me years to put it together with writer royalties.
3 people found this helpful

PR GUYReviewed in the United States on March 11, 2016
5.0 out of 5 stars
THE BEST MOVIE EVER ABOUT THE BIRTH OF ROCK N' ROLL
Verified purchase
A friend of mine who provides the sound for many local bands at concerts recommended this movie. He knew how much I loved the oldies and the early years of rock n' roll. Man, was he ever right when he said "You'll love it!" Starring Adrian Brodie as the Chess Records owner and producer, this flick is simply awesome. It digs deep into the roots of the blues and rock n' roll from the 1940s to the 1960s. The emphasis is on Rock n' Roll Hall of Famers Muddy Waters, Little Walter, Cryin' Wolf, Chuck Berry and Etta James. This riveting drama captures the growing pains of bringing revolutionary music into America. It reminded me of the Jackie Robinson Story (first black professional baseball player). It was a tragic time when blacks and their music was simply rejected by white America, but Adrian Brodie portrays Leonard Chess of Chess Records who gives all of these artists the opportunity to break new ground. It is an emotional roller coaster ride with a soundtrack that will give you chills...especially Beyonce as Etta James. I'm still kind of numb after watching this. It had me glued to the screen every single second. If you're a lover of oldies music and roots of rock n' roll, don't miss this one. All 5 stars...without hesitation.
4 people found this helpful

JazReviewed in the United States on November 9, 2020
1.0 out of 5 stars
HORRIBLE - If you love muddy waters and the original blues artists stay far away!
Verified purchase
Like the charlie parker (bird) movie, they felt the need to redo the original music. Unlike the bird movie which used Charles McPherson who is a fabulous musician and one of the most qualified to emulate charlie parker, this movie used musicians and singers who sounded nothing like the originals. Like Bird, and the Miles movie, they felt compelled to focus on womanizing, drugs, etc. I'd give it zero stars if I could.
See all reviews
Back to top
Get to Know Us
Make Money with Us
Amazon Payment Products
Let Us Help You
EnglishChoose a language for shopping. United StatesChoose a country/region for shopping.
© 1996-2021, Amazon.com, Inc. or its affiliates