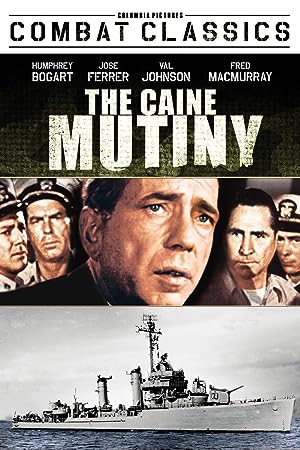 (1,930)7.72 h 4 min1954ALL
A naval lieutenant is court-martialed for seizing command of a minesweeper from a neurotic commander (Humphrey Bogart).

J.S. Bach FanReviewed in the United States on February 17, 2018
5.0 out of 5 stars
The Complexity was easy for me to miss at first.
Verified purchase
I have seen this movie twice. The first time I saw it several years ago I really did not
appreciate the complexity of the story. I fully sided with the decision to remove the
Captain from his post.

But when I watched it again recently I realized for the first time that this movie is not
so one sided and "obvious" in what I, at first viewing, thought.

The acting is very very good. Bogart is at his finest and the supporting cast is very
good at showing the differences of opinion. Look closely for the plaque on the
wall in one of the scenes. It is a key to understanding the tremendous mental stress
and pressure that Captains are under when German U-Boats are all around.

margotReviewed in the United States on April 30, 2019
5.0 out of 5 stars
Beautiful bad cinema
Verified purchase
Seeing this again for about the 15th time, I noticed that the script seemed really haphazard. Cliché-ridden and sentimental, it dawdled around on minor side-stories, and scenes of Yosemite Valley, without really getting into the meat of the Captain Queeg plot till the second half. But Wouk had a hand in the script, and was merely following his own novel, which was not about Captain Queeg, but rather a naval ensign who got caught up in a commonplace situation of the Pacific War.

Fred MacMurray as always is wonderful. This is one of his three or four 'dark' movie roles, along with Double Indemnity and The Apartment. Humphrey Bogart is the centerpiece, but he's just sad; I believe that Dick Powell, who wanted the role, would have been better. Van Johnson shines in a hapless role.

José Ferrer is at the top of game, top of his career. You can see why they carved out his court-martial scenes and made them into a two-act stage play.
8 people found this helpful

IndoReviewed in the United States on December 1, 2020
5.0 out of 5 stars
Love It, Great Restoration of a Great Movie
Verified purchase
As one of my all-time favorite movies, getting it in 1080p HD for my home Plex library is great. I loved the book when it was first published, and I've seen the movie on TV several times. Now having it readily available, anytime, for the "big screen" in the livingroom, or any other screens... well it's just more than worth it for me.

Another HD movie I recently bought was African Queen with Bogart & Bacall. I loved that early 50's movie, but had only ever seen it in black & white or on the pathetic color TVs of the last century. It was so much better in HD on a Blu-ray disk.

As a bonus on that disk, there was a short article about the difficulty of restoring old films shot in Technicolor. Technicolor cameras were huge cameras, because they used three rolls of film simultaneously... one each of the three basic colors. Three cameras in one, to get better color than a single roll of color film could provide. Theaters then needed Technicolor projectors with three synchronized projector lenses to blend the three colored film rolls together.

To digitize those old films, restorers had to find the best individual reels of the three colors, and synchronize those, frame by frame (including the sound), as they restored each frame. It's a far tougher process than I ever realized, and with Technicolor, three times as difficult as with B&W or other color processes. I'm glad there's enough of a Blu-Ray market to justify the cost of such a difficult restoration on old classic films.
3 people found this helpful

M. D. VasquezReviewed in the United States on October 7, 2019
5.0 out of 5 stars
Cooperation Is Key
Verified purchase
I especially liked the back story videos. I never read the book, so found it interesting their comments on what happens in the book to the characters. Quite a twist!

This movie has very strong performances by Humphrey Bogart, Van Johnson, Jose Ferrer, and Fred MacMurray--who usually is a more mild manner performer (thinking of "My Three Sons") but sure can turn around and portray a heel.

Also shows that even when we think poorly or don't want to work with a manager that doesn't meet our expectations, we still need to be behind them to make a situation work, and maybe could sway a situation to a more positive end.
6 people found this helpful

Godzilla’s Curling IronReviewed in the United States on June 22, 2021
2.0 out of 5 stars
A didactic shadow of the book
Verified purchase
Blegh this movie was so lame. I read the book last winter while the world was collapsing (winter 2020- whadda party) and loved it. The main character Willie Keith is a hilarious, soft preppy boy who knows the difference between loafers and wingtips but not much else. He’s thrown into a situation that he’s completely unprepared for. The story is compelling because of the politics between the characters and the weird nature of hierarchies in high stakes situations. Add to this the nature of sacrifice in war time and you have a truly compelling story. This all gets lost sadly in a super condensed movie that hits plot points but fails utterly to capture the nut of Keith’s experience. I guess the studio C-suite decided to use The Caine Mutiny as a vehicle for navy propaganda. Maybe that was Wouk’s point ultimately but I thought the book was way more nuanced & interesting than that. Humphrey Bogart is fabulous as always but even he can’t carry this flat interpretation.

Would love to see Ava DuVernay recreate this as a mini series with a revisionist twist focusing on the dudes in the engine room. Someone please redo the Caine Mutiny!
One person found this helpful

DJLReviewed in the United States on December 25, 2019
3.0 out of 5 stars
A mishmash of story lines...
Verified purchase
Unfortunately I haven't read the book, so the role that the communications officer (Fred McMurray) played in the plot is still unclear. It did not occur to me that he was a "bad guy" — perhaps just lacking spine?

The love story, the overbearing mother, the typhoon, the court martial, and the celebration do not blend together into a compelling story. Loose, desultory threads distract from the main plot.

The scene in the bridge was well acted, but the following scenes (Treasure Island, the hotel celebration) seem mostly lifeless. The behavior of the lawyer makes little sense to me.
2 people found this helpful

LRReviewed in the United States on April 29, 2015
5.0 out of 5 stars
Thought Provoking: Where Should Sympathies Lie?
Verified purchase
The acting in this movie is its most notable feature. I read "The Caine Mutiny" before seeing the movie, and while there are some significant differences (for example, Willie was actually something of a spoiled rich kid who joined the Navy because it would keep him out of the Army), the fundamental story was the same. And when Herman Wouk wrote the character of Captain Queeg, he must have had Humphrey Bogart in mind! This story is one where one starts out sympathizing with the mutineers because of Queeg's outrageous actions, but in the end, one must think carefully about what really happened and what it means to command a ship at sea during wartime.
17 people found this helpful

BwhamiReviewed in the United States on June 1, 2014
5.0 out of 5 stars
The Caine Mutiny
Verified purchase
Humphrey Bogart is Lt. Commander Queeg. That should be it for this review. The Cain Mutiny was adapted from a Book by Herman Wouk. The basic story is about a few junior officers on the USS Cain who have to deal with the complicated Lt Commander Queeg. The main character, Ensign Willie Keith (Robert Francis, who died in a plane crash at age 25), joins the crew of the USS Caine is is displeased with the current Captain. Soon after he is replaced by Queeg and the fun begins, not fun really. After a few incidents, accidentally cutting a tow line, a search for a key that never existed, the some of the Junior officers, Van Johnson as Lt Steve Maryk is their leader, take over the ship during a sever Typhoon. The Court Marshall is very tense and we see a stellar performance by Bogart. The cast is fantastic, besides the ones i have mentioned, there is Fred MacMurray, E.G. Marshall, Le Marvin, who provided military advice and Jose Ferrer is brilliant as the defense attorney. There is some war action, but the Court Marshal is the main focus of the movie. I recommend this movie.
12 people found this helpful
See all reviews
Back to top
Get to Know Us
Make Money with Us
Amazon Payment Products
Let Us Help You
EnglishChoose a language for shopping. United StatesChoose a country/region for shopping.
© 1996-2021, Amazon.com, Inc. or its affiliates