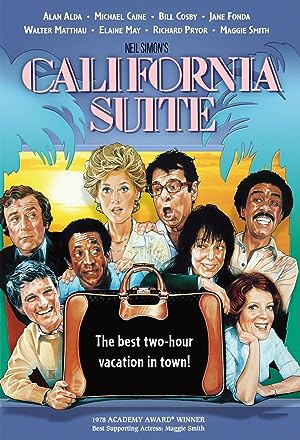 (439)
6.21 h 42 min1978PG
CALIFORNIA SUITE is Neil Simon's laugh-drenched adaptation of his hit Broadway play. Intertwining stories set in the Beverly Hills Hotel include an English actress in L.A. attending the Oscars(r); a divorced couple concerned about the future of their daughter; a philandering husband who must explain a hooker to his wife; and two couples on the worst vacation imaginable.

John FReviewed in the United States on October 2, 2019
4.0 out of 5 stars
A guilty pleasure
Verified purchase
I somehow missed this movie when it came out in 1978, and I looked for the DVD when I saw it rated fourth in the UK Guardian's list of Maggie Smith's best movie performances. I skimmed the Amazon customer reviews before buying, and I'd say all of them are right in their own way, except maybe those that found nothing at all to like about the movie. It's a dated but interesting period piece, and I can see why there is such a range from liking to loathing for the different segments. I personally quite enjoyed the Maggie Smith/ Michael Caine sequences. I've no idea why Dame Maggie received an Oscar for her performance, except that her timing and delivery are remarkable as always: as one reviewer put it, she "turns every single one of her sow’s ear lines into a silk purse by acting as if they were very witty and amusing." It was also good to see the young Alan Alda and Jane Fonda, though I found their early scenes badly scripted and merely acerbic. I quite enjoyed some of the slapstick, especially that involving Walter Matthau and Elaine May, but the lame routines that Bill Cosby and Richard Pryor are given to work with are mostly embarrassing. All in all, a guilty pleasure, and I'll watch the movie again sometime!
2 people found this helpful

Max FabienReviewed in the United States on October 3, 2010
4.0 out of 5 stars
Sweet "Suite"
Verified purchase
"California Suite" is everything from slapstick screwball comedy to serious real-life drama all rolled into one. Four stories intermingle to make you laugh your head off and cry your eyes out. The Jane Fonda/Alan Alda segment isn't so much funny as it is bitingly witty, much like "Who's Afraid of Virginia Woolf?". The Walter Matthau/Elaine May segment is generally very funny, although Matthau at times does have a tendancy to over-react a little. The Bill Cosby/Richard Pryor segment is the weakest of the four. Although it has a few very hilarious scenes, the 'fight scene' in the hotel room is ridiculous and strained. The best segment features Maggie Smith and Michael Caine. There is no question why Maggie Smith won and Oscar for her portrayal of, ironically, a movie star who is nominated for an Oscar. This segment is side-splittingly funny, sad, witty, and tender. The chemistry between Smith and Caine is remarkable. This type of clever writing and superb acting is what is missing from the garbage that passes off as comedies today.
5 people found this helpful

Shane DaneReviewed in the United States on August 23, 2021
4.0 out of 5 stars
Matthau and May
Verified purchase
So strangely right for each other in A New Leaf i saw on Broadway, even more so here calling drunk date our hooker. Dame Maggie and Sir Michael, not sure if they were acting, particularly in a Herbert Ross film. And Fonda, new breasts on the beach.

Laura JumelReviewed in the United States on August 31, 2021
4.0 out of 5 stars
Just Plain Funny
Verified purchase
This movie has a LOT of stars in it. They get into so many situations. It's just plain fun

PrisMReviewed in the United States on January 13, 2019
5.0 out of 5 stars
Great DVD
Verified purchase
I saw this movie several years ago and was so glad to find this DVD version of it.

Carolyn WrightReviewed in the United States on November 28, 2011
5.0 out of 5 stars
Excellent scripting, timing and casting.
Verified purchase
This has long been a favorite of mine, recalling the perfectly timed bantering between Alan Alda and Jane Fonda. Maggie Smith's insecure tittering and Michael Caine's never cruel comebacks and, of course, Cosby and Pryor hilariously dealing with their vacation mishaps. I never tire of Matthau's gift for dealing w/awkward situations and still hear him exclaiming "You're so BALD?!?"

Casting in all 4 stories was, I think, perfect, particularly Elaine May's calm demeanor during the obviously suspicious situation during which she arrives.MORE,please.

R. QuackenbushReviewed in the United States on July 6, 2019
4.0 out of 5 stars
A winner!
Verified purchase
An all-star cast reminds us that playwright Neil Simon was a national treasure!

CBReviewed in the United States on June 14, 2021
4.0 out of 5 stars
Michael Caine/Maggie Smith!
Verified purchase
Forget the rest, the real stars are Michael Caine and Maggie Smith. The purchase is worth for them alone.
I gave it a "4" because these two are stellar, but the rest of the film does not measure up (IMHO).
Good picture and sound. Arrived on time.