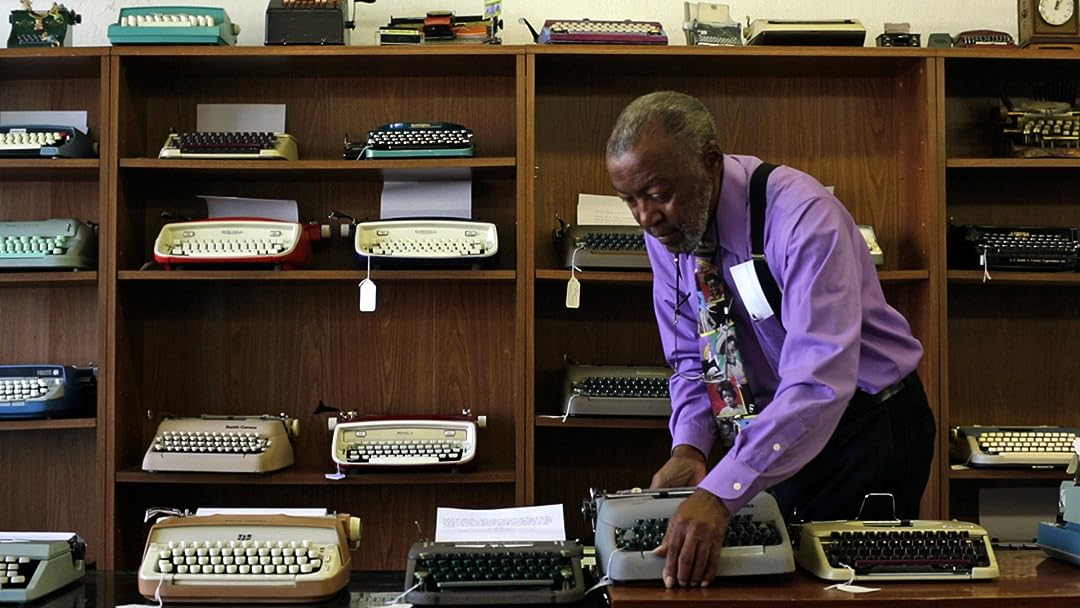 (148)
7.31 h 44 min20167+
Cultural historians, collectors, and various celebrity obsessives, including Tom Hanks and John Mayer, launch us into the bittersweet moment when a beloved-but-dying technology, the typewriter, faces extinction.

Linda M. AuReviewed in the United States on January 11, 2018
5.0 out of 5 stars
More than just a "typewriter documentary"! Pays homage to the creative spirit!
Verified purchase
I adored this documentary. Then again, I adore typewriters. I use Selectrics, in particular, to write first drafts of my novels. They have a real quality that my word processors don't.

I've met several people featured in this documentary, and they shine nearly as much on the screen as they do in real life. It was great fun to see them honored for their own contributions to preserving these honorable machines.

If you think you still have Grandma's old typewriter hidden in the attic, I urge you to go find it, clean it up, buy a new ribbon on Amazon (they're cheap and plentiful!), roll in a sheet of clean paper, and type away. There is something about hearing and feeling the mechanics of a typewriter that cannot be matched by any computer. Write someone a thank-you note. Send someone a letter so they know you're thinking of them. Believe me, it'll make their day.

Even if you have no interest in the typewriter itself, you will be moved by the people presented in this documentary. Their stories unfold in an intriguing way and the filmmakers leave you with wanting to know more about each and every one of them. One point of fascination is seeing each person;s intimate connection with their machine(s).and their individual philosophies that have developed from using the typewrter Tying all of these stories together is the overall examination of the California Typewriter shop and the people who work there.

Do not think this is a journey into the Wayback Machine, for even though these machines are older than most of the people who will read this review, you will see your contemporaries up here extolling the virtues of the typewriter.

The Silent GondolierReviewed in the United States on February 23, 2018
5.0 out of 5 stars
A Little Revolution . . .
Verified purchase
I learned to type on the electric typewriter way back in the early 80s. Sometimes the teacher would turn off all the lights and we would sit in a pitch black room that vibrated with the hums of thirty different machines. We waited for the cue. Ready, set, go! And all of a sudden that pitch black room erupted in sound, like a fireworks fountain had been lit right in the middle, as we all typed blindly on our keyboards. It was exciting and surreal.

This wonderful documentary captures the strange magic inherent in the analog mechanisms of the typewriter. Even if you have never typed on one before, you can appreciate the stories they have to tell. Maybe California Typewriter will inspire you to buy one, or to bring out that old machine from its year's-long exile to the closet and dust it off.

P.S. Tom Hanks and I have the same favorite typewriter: the Smith-Corona Super Silent. Mine is kind of quirky. Three of its keys are detached from their hammers (luckily ones that I would probably never use), the bell doesn't work, a couple of keys need a bit of alignment, and the space bar sticks a little sometimes. But I love the heck out of it. It's my buddy, my writing pal through thick and thin. You feel a kind of relationship with a typewriter after a while, like it's almost a living thing. I'm not sure why. Maybe because it knows all your secrets and sticks around anyway.
6 people found this helpful

Just As I AmReviewed in the United States on December 4, 2018
5.0 out of 5 stars
Very engaging, strikes an artist chord
Verified purchase
I wouldn't have watched this without reading the reviews plus that Tom Hanks and John Mayer were in it but I found I didn't want to get up from the film as it was very engaging and spoke to the nostalgia for tangible creations of art and writing... while embracing and using technology to not be consumed by it. Overall interesting and informative, found myself wondering if my folks who kept everything, broken or not, have a typewriter around.
Certainly being 62, I learned typing early (it was offered as a high school class) and got my first jobs in offices from that skill, (which evolved into computer office skills in my mid-20's as well) so watching this film was full of that creative-writing and vocational familiarity ... and evoked the paradox. The annoyance of filing out 3-color forms and having to use 3 colors of white out for each mistake turned me into a good typist ... the wanting to edit something written ... all made computers so welcome when they came. But then the computer screen sort of takes over your vision while the typewriter used to give an open scope. The downside is that while the sound may be enjoyable while working on a typewriter, to a housemate or thin-walled apartment neighbor, it can be maddening and wreck any chance for a peaceful space; whereas the computer is quiet and that is the upside, (much like having a family member who wants to play music you don't like at all ... when you want to hear your own music ... has now been pacified by headphones (ear buds) and saved relationships and given each one what they want.
Well, as you can see, it's a film that gets you thinking, creative again, remembering ... remembering things like getting hand written letters in the mail or having your writing or your lyrics in a book of pages rather than on a CD or saved hard drive ... the interaction with more personal, more tactile, experiencing of life.
I can say that while it was a low-key sort of documentary, for this genre of creatives who would watch such a thing, it's better than I would have guessed.
I felt they missed something by not showing / including a piece on the late Paul Smith, a typewriter artist with cerebral palsy, who created art you never would imagine could come from a typewriter to fill out the story ... Google him if interested. Also today I saw a YouTube clip of a make-shift band who used a typewriter in their percussion section ... complete with bell from the moving typewriter lever. ...
Do you know how many edits I made in this little review... not from errors but for writing & reading purposes? Would have been a mess on a typewriter. Lol. But now I want one anyway...
.... Good film... satisfying.
4 people found this helpful

KittyReviewed in the United States on August 3, 2020
5.0 out of 5 stars
Stories about Typewriter
Verified purchase
Great documentary. That reminds me of my father typewriting for many years until he passed away in 2012. My father was an old-fashioned. He loved typewriter so much. One day when he was alive, I tried to teach him how to use a computer but he refused. He was not giving up a typewriter. I can hear him typewriting frequently at home. My father stopped typewriting when his health was deteriorating. I took 2 pictures of his last paper in the typewriter with my phone one night. Letters and words on that paper looked like it's screwing up.

I took a typing class in high school in Pennsylvania where I grew up. I am a very good at typing the paper. I enjoyed typing whenever I can.

M CReviewed in the United States on March 7, 2018
5.0 out of 5 stars
A Worthwhile Doc!
Verified purchase
The definitive look at the history of typewriters and those who adore them, collect them, restore them and more. It is and will be in the future the go-to place to learn about everything typewriter. Virtually extinct, the typewriter has a loyal, albeit small group of users who explain why they like the using the antiquated device over new technology. It's a thorough ode to a piece of machinery that's been out of sight and out of mind for most. Even if you've never used the device, you're drawn in by the energy, passion and love the interviewees have for their sacred typewriters. It's worth the trip down memory lane for some and for others it will be as informative as anything you watch.
2 people found this helpful

ANNReviewed in the United States on December 11, 2017
5.0 out of 5 stars
A surprisingly moving film
Verified purchase
An interesting, inspiring, and unique film. I have no specific interest in typewriters but found myself thinking about the past, when there was much less technological advancement, and wishing for a return to that time of privacy and individualism. The people and their stories surrounding typewriters are more moving than you might expect.
7 people found this helpful

BibliowormReviewed in the United States on December 4, 2017
5.0 out of 5 stars
Intriguing exploration of a forgotten technology
Verified purchase
What do we leave behind when we abandon an "obsolete" technology? What new possibilities open up for those neglected machines? This documentary takes you into a quirky realm of artists, collectors, and writers who still find potential in typewriters, with the help of a small repair shop in Berkeley, California. You may be inspired "to rebel against the Information Regime, to escape the Data Stream" (to quote the manifesto of [[ASIN:1581573111 The Typewriter Revolution]], included in this film).
8 people found this helpful
See all reviews
Back to top
Get to Know Us
Make Money with Us
Amazon Payment Products
Let Us Help You
EnglishChoose a language for shopping. United StatesChoose a country/region for shopping.
© 1996-2022, Amazon.com, Inc. or its affiliates