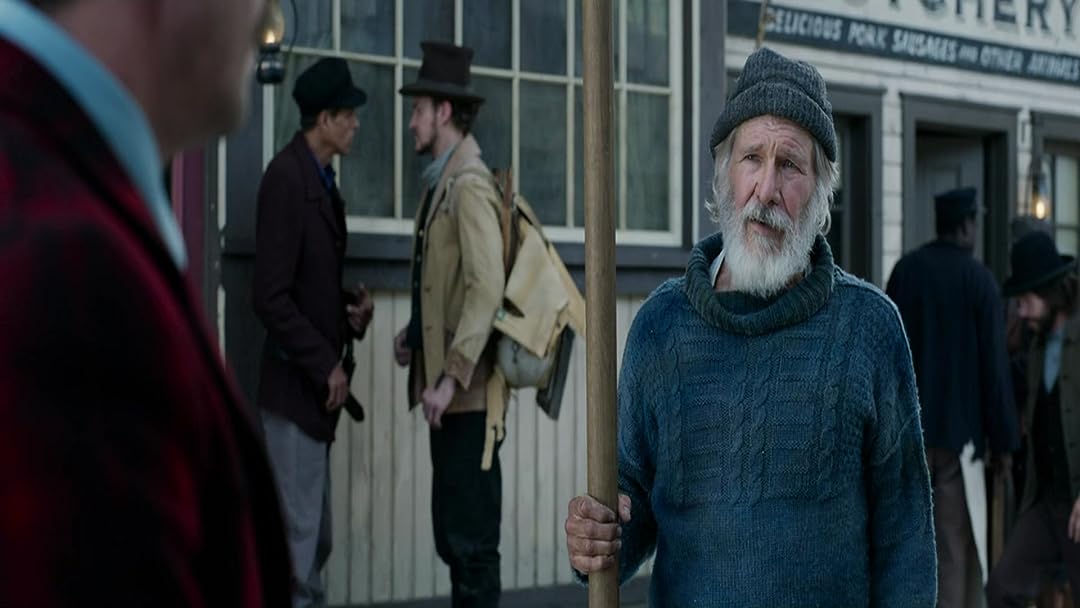 The Call of the Wild

Carl SchultzReviewed in the United States on February 24, 2020
4.0 out of 5 stars
One Of The Best Screen Versions of London's Novella
“The Call of the Wild” Distributed by 20th Century Pictures, 100 Minutes, Rated PG, Released February 21, 2020:

The fourteenth motion picture version of Jack London’s classic adventure tale “The Call of the Wild” is one of the best. First adapted to the screen in 1908 by legendary film pioneer D.W. Griffith as a one-reel silent picture, the story has been remade and reimagined for the movies approximately once every generation, and sometimes more, since the book’s original publication in 1903, in versions long and short.

Told from an animal’s perspective, simultaneously vivid and lyrical, poetic and haunting, London’s classic novella describes the story of Buck, a 140-pound mixture of St. Bernard and Scotch Collie, the pampered and privileged pet of a suburban California county judge. Buck is stolen from his home, transported to the remote Yukon region of then-Canada, and sold into a kind of canine slavery as a sled dog during the Gold Rush of 1899.

The tenderfoot dog eventually toughens to become a valued and coveted companion, but gradually regresses into the more instinctive primal incarnation of his prehistoric ancestors through his interactions with a series of owners both cruel and kind. Still, the dog never quite loses his inherent tendencies of loyalty and affection, particularly when he falls under the ownership and care of the rugged John Thornton, a tough but morally decent northern prospector.

For about the first half of the new film version of the novel, “The Call of the Wild” remains surprisingly--and admirably--accurate to both the spirit and letter London’s novella, with the more brutal interludes either toned down or removed entirely. As the playful and sweet-spirited Buck is broken, beaten, and tamed by his kidnappers, the cruelty of the first beating is thankfully restrained, cleverly depicted through shadows on the wall of a cabin. And even then, the worst of the brutality is represented by impact scorings on the billy club used for the beatings.

Unfortunately, the second half of the movie is more in the spirit of the bland but successful recent canine-based pictures such as “A Dog’s Purpose” and “A Dog’s Journey.” It’s at the halfway point that “Call of the Wild” becomes a fairly standard shaggy dog story...or rather a shaggy Harrison story, with the film’s star Harrison Ford arriving in the narrative full-time, in a more unkempt and hirsute than usual incarnation as John Thornton. Sporting collar-length hair and a full beard, the aging matinee idol Ford somewhat resembles Robert Redford’s title frontiersman in 1972’s “Jeremiah Johnson.”

From the point of Ford’s arrival forward “The Call of the Wild” transitions from Buck’s story into a Harrison Ford picture, with the Thornton character now complete with an affecting back-story involving the tragic death of his beloved adolescent son, a retreat into alcoholism, and a withdrawal from civilization. And despite Ford’s best efforts to pass himself off as a Great White North incarnation of Walter Huston in “The Treasure of the Sierra Madre,” Harrison Ford is Harrison Ford, and from his arrival forward it doesn’t take much imagination to start thinking of the picture as a Han and Chewie kind of thing.

Directed by former Disney animator Chris Sanders from a screenplay adapted from London’s novella by Michael Green, who also wrote the scripts for 2017’s “Logan,” “Blade Runner 2049” and “Murder on the Orient Express,” “The Call of the Wild” is a triumph of computer-generated animation, giving the picture a sort of Once Upon a Time storybook quality, an effort augmented by star Ford’s narration, read from London’s own matchless prose.

The film’s central character, Buck, is a fairly realistic recreation but 100% computer-generated, about as authentic as the baby elephant in Tim Burton’s recent live-action remake of Disney’s classic cartoon “Dumbo,” and at least twice as heart-tugging. As a result of the obvious computer-generated imagery, at no point during the narrative is the viewer fully persuaded that Buck is a flesh-and-blood character--probably a good thing, considering the brutal reality of some of the film’s content.

Still, nobody does this sort of thing as well as the folks at Walt Disney Studios--or rather the Disney-owned 20th Century Pictures. An abridged and truncated version of Jack London’s vivid prose is better than no Jack London at all, and an accurate representation of the final pages of London’s story would likely have landed the picture squarely into R-rated territory and been politically incorrect besides. This new version is miles ahead of, say, the 1935 movie version of the tale, which effectively removed Buck’s story entirely and ultimately became more noteworthy for the scandalous (for the time) off-screen location antics of stars Clark Gable and Loretta Young.

“The Call of the Wild” is receiving approving notices from the critics, including an approval rating of 65% from Rotten Tomatoes and an weighted average of 47% from Metacritic. Rotten Tomatoes notes that “this heartwarming ‘Call of the Wild’ remains a classic story, affectionately retold.” Produced on a budget estimated to have been north of $125 million and released to some 3700 theaters across the United States and Canada (presumably including the Yukon), the film was expected to earn up to $20 million during its opening weekend.

According to literary legend, Jack London spent a year in Canada’s Yukon conducting research into the background of the novella, and used the book’s profits to purchase the vessel on which he wrote his classic 1904 novel “The Sea Wolf.” As an historic note, the new film version of “The Call of the Wild” is the first motion picture using the “20th Century Pictures” logo (minus the “Fox”) since…well, since ”The Call of the Wild” in 1935.

Also featuring spirited performances from Bradley Whitford as Buck’s original California owner, Omar Sy and Cara Gee as a dedicated team of Royal Mail couriers, Michael Horse as a frontier judge, and Dan Stevens as a vengeful novice prospector with gold fever, “The Call of the Wild” is rated PG for violence, peril, thematic elements, and mild language.

joe eReviewed in the United States on March 29, 2020
1.0 out of 5 stars
CGI graphics Dog
Verified purchase
the darn dog is CGI. Could't even get a real dog and dog trainer.??
124 people found this helpful

smithieReviewed in the United States on March 30, 2020
1.0 out of 5 stars
Should have had a trailer or at least a warning about the insanely distracting CGI DOG!
Verified purchase
I couldn't get 5 minutes in, if even that far. I didn't even make it to wherever Harrison Ford might have been. Totally unwatchable - I had to kill it after the family photo at the beginning. Had it had a trailer to view I could have seen for myself that I would not be able to watch this film with such an obviously fake dog. How can you enjoy a movie when it is so distractingly bad? Unless you don't mind obviously fake dogs, AVOID THIS and save yourself 14.99. I should get a refund under these circumstances. It's one thing if the plot or acting sucks (and I've eaten the fees every time that happens) but to have not had this basic warning or a trailer (for a film that hasn't been out so you have some idea what you are in fo) is ridiculous. If it were possible to give it negative stars I would have rated it minus 1 or lower. Unfortunately plus 1 is as low as it can go.
96 people found this helpful

CandylizReviewed in the United States on March 30, 2020
1.0 out of 5 stars
Huge disappointment
Verified purchase
All dogs were digitized...felt like some children's movie with a lot of hokey silliness. Not even any good scenery of Alaska that wasn't just generated by a computer.
97 people found this helpful

Sarah J SederbergReviewed in the United States on March 29, 2020
5.0 out of 5 stars
Loved it. Emotional roller coaster and lots of thrilling, edge of your seat moments.
Verified purchase
I really enjoyed this adaptation of the novel, they are getting really good at realistic CGI for dogs.

Harrison Ford was gold in this movie. And Buck was a wonderful character, a gentle giant, who was really expressive with emotions which made the film THAT much better.

That being said, the original story is a heart-breaker, and know that there are some scenes in this film that show trauma and themes that may require some guidance and explanation to a younger viewer.

Hope you enjoy, keep your tissues ready for a few tears!
87 people found this helpful

nana4Reviewed in the United States on March 31, 2020
5.0 out of 5 stars
Wonderful Movie of an Acclaimed Book written by Jack London
Verified purchase
I first saw this movie of The Call of the Wild at the local theater. It is a wonderful movie of the classic read that was authored by Jack London. I just saw the movie again on prime video through Amazon. I definitely recommend this purchase and watching this wonderful movie. The character played by Harrison Ford is superb and the dog is also excellent! After seeing this at the theater when it was first released. I ordered the book for my twelve year old grandson. The book is an excellent read!
55 people found this helpful

FergusReviewed in the United States on March 29, 2020
5.0 out of 5 stars
They Deserve Respect and their Story
Verified purchase
... wasn't the greatest film, but it gave respect to a dog and told his story. As man's best friend, they deserve that. Thank you for the movie about my best friends.
40 people found this helpful
See all reviews
Back to top
Get to Know Us
Make Money with Us
Amazon Payment Products
Let Us Help You
EnglishChoose a language for shopping. United StatesChoose a country/region for shopping.
© 1996-2021, Amazon.com, Inc. or its affiliates