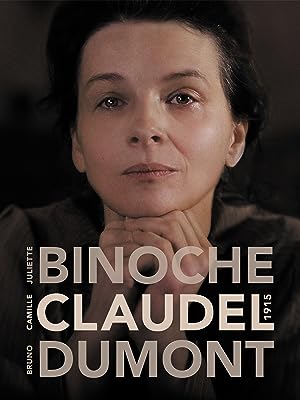 (112)
6.41 h 35 min201313+
Juliette Binoche gives a mesmerizing performance as Auguste Rodin's protégé and sister of the Christian poet Paul Claudel. Inspired by the correspondence between Paul and Camille, the film focuses on Camille Claudel's struggle to find understanding and recognition as an artist moments before her brother's visit during her 29-year confinement in a mental institution.

K.MarkeyReviewed in the United States on October 21, 2016
5.0 out of 5 stars
Intimate portrayal of Shakespearean magnitude betrayal.
Verified purchase
One of the saddest life stories ever. This movie is exactly opposite the first movie made about Camille Claudel. This is dialogue driven with raw emotion and circumstance in Camille's post-Rodin life, after she was installed into an asylum. Her family was cruel; it helps to research her story on the web to understand her history It is amazing to me that while she sculpted, she was so prolific, given the obstacles and shackles placed on her by Rodin, her family and society. In the beginning, she got a good break with her career in the women's school, but her love for Rodin was eventually her downfall ... and her family betrayed her even more. Great performances and a well-done, very intimate movie. Her story draws some similarities to Joan of Arc's fate -- keeping women in their place and taking their power away to make sure men stay on top. Claudel knew exactly what was going on with her art talent being closed off, and I wonder how long she kept hope that her family would do right by her? How she lasted that long in there, I have no idea. Betrayal by a mother is the most evil kind and her brother was a greedy coward, equally evil. It's hard to click, "I love it" = 5 stars, but these stories MUST be told truthfully, and I think the movie achieves that simply and as coldly as it really happened.
20 people found this helpful

RyanReviewed in the United States on July 10, 2020
1.0 out of 5 stars
Always double check Blu-Ray.com
Verified purchase
This film (on its own) is amazing - if you can find it with subtitles. This specific product, however, doesn’t come with anything other than French subtitles, which seems shortsighted, considering it’s not only a Region B disc (that’s meant to work across the vast majority of European BluRay players), but also because BluRay discs are capable of storing massive amounts of data. Why not include (at the very least) one other subtitle option? Anyway, the subtitle options are usually listed in the technical section of the product description but aren’t for this item. It took too long to arrive too late and wasn’t clearly advertised. Great film; not so great product (unless you speak French).
3 people found this helpful

Kathy O. Reviewed in the United States on June 3, 2022
4.0 out of 5 stars
Wonderful Acting
Verified purchase
Brilliant, sensitive acting. You should know the history of Camille Claudel to put it into context though. It really should have SOMETHING explaining how she got there and how she died there. It’s just a depressing movie without that context. If you are interested in sculpture though? Add this to your library. Understanding the brilliance and decline of Camille Claudel is something that helps you understand her work.

SindriReviewed in the United States on June 19, 2014
5.0 out of 5 stars
"Reverently cinematographic, humane and lingering..."
Verified purchase
French screenwriter, film editor and director Bruno Dumont`s seventh feature film which he wrote, is based on the works and correspondences of Paul and Camille Claudel and Camille Claudel`s medical records. It premiered In competition at the 63rd Berlin International Film Festival in 2013, was shot on location in real asylums in France and is a French production which was produced by producers Jean Bréhat, Rachid Bouchareb and Muriel Merlin. It tells the story about a middle-aged sculptor from Villeneuve-sur-Fère, Picardy in France whom after living at a mental institution which her family sent her to, is taken to an asylum in Montdevergues, France.

Distinctly and precisely directed by French filmmaker Bruno Dumont, this quietly paced and somewhat biographical retelling which is narrated from multiple viewpoints though mostly from the main character`s point of view, draws a literary and reflective portrayal of a woman whom after being in a relationship for fifteen years with a renowned sculptor named Auguste Rodin and spending the next ten years of her life in a self-imposed solitude, was diagnosed as schizophrenic and against her own will committed to a psychiatric hospital near Paris, France. While notable for its naturalistic and atmospheric milieu depictions, reverent cinematography by cinematographer Roger Arpajou, production design by production designer Riton Dupire-Clément, costume design by costume designers Alexandra Charles and Brigitte Massey-Sersour and use of sound, colors, light and real patients and their nurses, this narrative-driven story about a French author, father of four and diplomat who had the power to determine the outcome of his sisters` future, depicts an abridged and concentrated study of character.

This densely conversational, at times humerous and tangible narrative feature which is set in France in the early 20th century and where a daughter is fighting for her independence whilst holding on to her convictions about her former teacher and that someone is to poison her, is impelled and reinforced by its cogent narrative structure, subtle character development and continuity, the commendable emphasis on the similarities of all the people at the Montdevergues asylum, noteworthy scene of Camille reading in a church and the masterful acting performances by French actress Juliette Binoche and French actor Jean-Luc Vincent. A reverently cinematographic, humane and lingering homage.

Rae AnnReviewed in the United States on March 25, 2015
5.0 out of 5 stars
just terrific. Also
Verified purchase
If you are someone who is truly interested in the inner life of Camille Claudel and her feelings (grief, anger, paranoia, etc.) towards Rodin, this is a performance that makes you feel as if you were actually watching Camille. Ms. Binoche is spectacular. She projects abandonment and hurt and so many emotions while saying very little. It's all in her face and movement.

If you watch this just to see what the dynamic was between Rodin and Camille but really aren't that interested in the life of Camille, this probably is not the movie for you.
Cannot say enough about Juliette Binoche's acting; just terrific. Also, as this movie is based on fact, I dislike Paul Claudel more and more.
7 people found this helpful

Kathryn EmersonReviewed in the United States on April 21, 2019
5.0 out of 5 stars
Juliette Binoche is absolutely BRILLIANT
Verified purchase
A million emotions are portrayed in this great actresses face; a true story about a brilliant artist who was a victim to the times, the culture and the enormous success of Rodin, so sad but you can't stop having hope.
One person found this helpful

MDSmithReviewed in the United States on March 15, 2017
5.0 out of 5 stars
Haunting and superbly acted.
Verified purchase
This movie is haunting. The acting is superb. It deals with the artist's life after she had her abortion. It was a sad time and place to be a strong woman. I recommend this movie.
7 people found this helpful