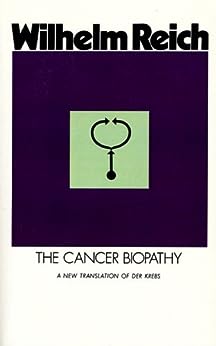 A Shrinking Disease Due to Chronic Sexual Starvation

What is cancer? Traditionally, medical science has thought of it as an invasive tumor arising spontaneously in an otherwise healthy organism. In contrast, Wilhelm Reich defines cancer not as a tumor--the tumor is merely a late manifestation of the disease--but as a systemic disease due to chronic thwarting of natural sexual functioning. In this radically different scientific investigation of a process that ends, literally, in the putrefaction of the living body due to chronic suffocation of the tissues, Reich has arrived at the conclusion that "cancer is the most significant somatic expression of the biophysiological effect of sexual stasis." If this is so, there is a far greater possibility for the prevention of cancer than for its treatment.

The Cancer Biopathy is Volume II of The Discovery of the Orgone. Volume I is The Function of the Orgasm.

Wilhelm Reich, a native of Austria, was born in 1897. His many works include Listen, Little Man!, Character Analysis, and The Mass Psychology of Fascism. He died in 1957.

gregory
5.0 out of 5 stars Very ground breaking!
Reviewed in the United States 🇺🇸 on August 3, 2013
Verified Purchase
What fascinated me the most about this book(what I new was content in the book before I purchased it) is Reich's experiments leading up to his muscular armoring and cancer work. I followed up on some of Reich's experiments in earth(soil) bions that yielded some very interesting results. My binocular 2500X magnification compound light microscope with a micro camera gave some interesting videos that I find hard to explain by tradition means.
Read more
13 people found this helpful
Helpful
Report abuse

Michael C Ellis
5.0 out of 5 stars The Next Step After 'Selected Writings: An Introduction To Orgonomy'
Reviewed in the United States 🇺🇸 on December 7, 2012
Verified Purchase
Some of the useful information in this book includes: the origins of the bion experiments, with photos; photodetection of orgone via contact photography, the cellulose orgone-scope and electronic sensors; cancer theory; bion water therapy; the orgone potential of fluids; and information on the effects of orgone therapy on developing children. Great to have on your shelf!
Read more
9 people found this helpful
Helpful
Report abuse

Frater W.I.T.
4.0 out of 5 stars Here is Reich's discovery of how life began, how sickness arises, and how this sickness can be healed
Reviewed in the United States 🇺🇸 on December 1, 2006
Reich describes his chemistry work with orgone to create "bions" and relates his personal experiences with the orgone in his consciousness. A new way to look at the magical phenomena is provided, an emergence of higher order from a chaotic ground.
Read more
4 people found this helpful
Helpful
Report abuse
See all reviews

Lowell
5.0 out of 5 stars A must read
Reviewed in the United Kingdom 🇬🇧 on October 27, 2017
Verified Purchase
As with all Wilhelm Reich books very deep and important information. He is a forerunner whos insights are more actual today with the present health crisis that we are confronted with. A must read for anyone who wants to get a greater insight into functional medicine and especially the dynamics of cancer.
Read more
One person found this helpful
Report abuse

Victor
5.0 out of 5 stars Reich work is a must
Reviewed in Spain 🇪🇸 on December 15, 2017
Verified Purchase
Reich work should be read by anyone into psychology or the behaviour of the human nature. Being underrated at his time, now is the moment to discover it again
Read more
Report abuse
Translate review to English

Amazon Customer
5.0 out of 5 stars Five Stars
Reviewed in the United Kingdom 🇬🇧 on November 21, 2015
Verified Purchase
An excellent book.
Read more
One person found this helpful
Report abuse
See all reviews
Report an issue
Does this item contain inappropriate content?
Report
Do you believe that this item violates a copyright?
Report
Does this item contain quality or formatting issues?
Report