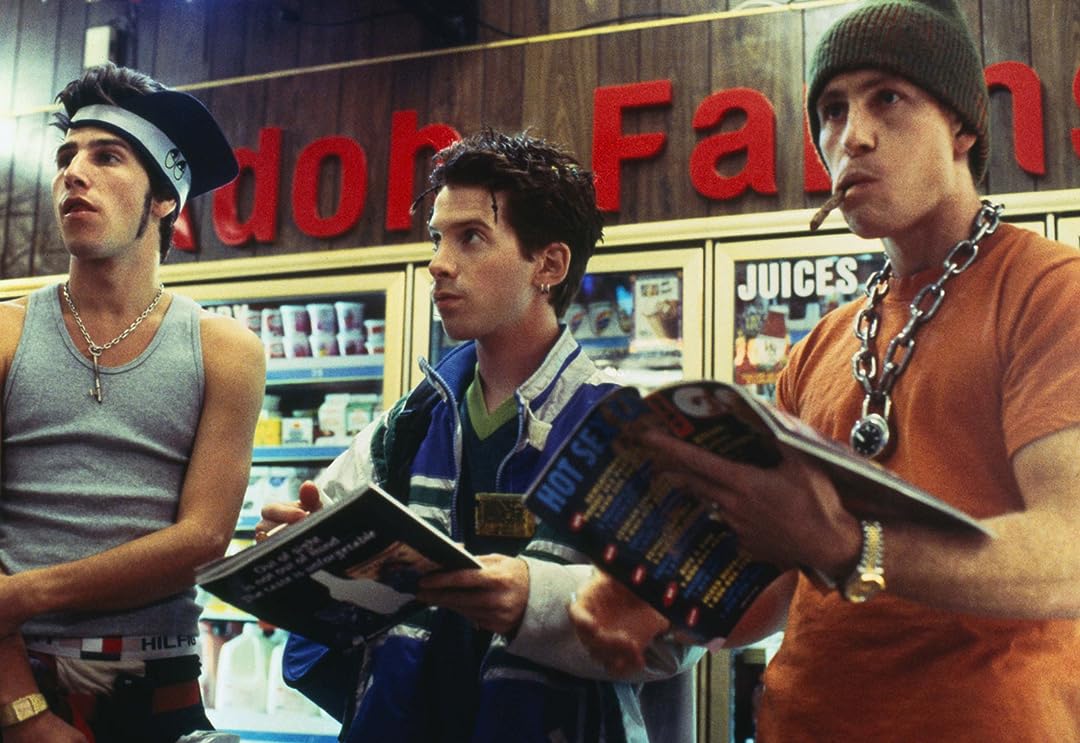 (1,271)6.51 h 40 min1998X-RayPG-13
Commencement ceremony is over, it's time for Huntington High's graduation party as jocks, geeks, prom queens, and misfits alike make a statement about the past and plot the uncertain future in this raucus comedy.

Susie QReviewed in the United States on November 16, 2020
5.0 out of 5 stars
Memories of the '90s...
Verified purchase
I seldomly tend to write reviews but thought I had to as there very few other reviews on what I (and many others in my age range) consider to be a classic.

This film precedes American Pie and is much better than it, despite Pie managing to become a household name almost overnight. Maybe the lack of needless crude humor hurt the film 'Can't Hardly Wait', but it's also a part of the charm.

There's nothing original about the plot, so no point going into detail about what is essentially a teen crush movie with a party setting. But it's the characters that make it so great. As in most things he's in, Seth Green steals the show in this case by being pretty fly for a white guy. The rest of the cast is also incredible and it's a fun game just watching this film to see who had a cameo in it. Despite the many times I've seen it, I completely forgot Jason Segal (I Love a You Man, How I Met Your Mother) had a brief but funny part, in what is apparently one of his very first roles, along with 1990s stars Jennifer Love Hewitt, Sean Patrick Thomas, Donald Faison, Freddy Rodríguez, Jaime Pressley, Tamala Jones, Marisol Nichols, Clea Duvall, and so many more.

The bonus content is great with featurettes clocking in just under an hour in total plus two commentary tracks (one from the original release and then a new one from the 20th year anniversary edition). The picture quality isn't amazing with a noticeable (but not too heavy) grain (which isn't unexpected from an indie that's a decade and a half old) but it's a pretty solid transfer. The sound is decent but I haven't watched it with surround. If you were into alternative/punk rock from the decade, you'll appreciate the soundtrack if not the sound.

Some USA sellers here currently have it for about $8+ excl. shipping (for a blu-ray!) so no excuse to check it out if you grew up in that era. And if you do like it, check out 'Josie & The Pussycats,' 'Reality Bites,' and 'Cruel Intentions' (other forgotten gems of the generation!).

AdamReviewed in the United States on September 14, 2021
4.0 out of 5 stars
This movie has every character from every highschool out there.
Verified purchase
This movie has it all from the cool kids, to the stoners, and the nerds. Enjoyed how it shows a bit of everyone's story, from the difficult decisions young adults make, to what it felt to be the outcast and picked on, we all can relate to one or more of these roles. An awesomely fun flick, where the nerd becomes king of the party and sorta gets his revenge, the dreamer gets the girl, This movie has several cameo appearances, of some of the hottest actors and actresses we've come to love, highly recommend.
2 people found this helpful

StevenReviewed in the United States on March 7, 2020
4.0 out of 5 stars
Great Movie, Lower Quality Blu-ray!
Verified purchase
This is a great movie! I give the movie 5 stars, however, the Blu-ray looks just like the standard definition DVD I have of this movie! I'm watching it on a 55” 4K UHD television and a Blu-ray/4K Blu-ray player. I know it isn't my television or media player because other HD and 4K UHD media look Amazon this TV, it's simply this Blu-ray! This being said, it may be a little clearer than the SD DVD but not much.
One person found this helpful

J. ButlerReviewed in the United States on February 27, 2015
4.0 out of 5 stars
Always a Fun Time
Verified purchase
Can't Hardly Wait is a fun little movie. Lots of stuff to laugh about, actors with cameos before they were big, and a great soundtrack. This movie is extremely quotable and the songs are a blast.

My only problem with this 10 year reunion releases is that the features, although appreciated, are a little weak.

They get a lot of the principal cast together, but I would have liked to have seen Jennifer Love Hewitt, Lauren Ambrose, or Charlie Korsmo. :/

Also, the deleted scenes weren't the worse, but the video quality was like a 5th gen vhs copy. I guess I shouldn't be too picky about cutting room floor scenes from a late 90's teen movie, but it would have been nice if the image was sharper.

The Great FlikReviewed in the United States on March 20, 2020
3.0 out of 5 stars
5 star movie, 3 star DVD
Verified purchase
Upon opening the DVD case, I was concerned when I saw the dvd itself because it was clearly not an official dvd. Then I found on the back of the case printed on the sleeve, "Disc made in Mexico". The last thing I have to complain about is that there is no menu. The movie is the only thing on this dvd which leads me to believe that it is a counterfeit/bootleg.

Bob NReviewed in the United States on January 11, 2021
5.0 out of 5 stars
Good Quality
Verified purchase
Good quality video and sound on this blu-ray disc. Fun movie to watch even for us old timers. Not exactly family friendly, but still entertaining for a teen film.
One person found this helpful

Peder004Reviewed in the United States on November 9, 2018
5.0 out of 5 stars
Good Movie
Verified purchase
I had not seen this film in a very, very long time. This is the movie that made me fall in love with Jennifer Love Hewitt when I was a kid. I really enjoyed seeing it again. lots of fun!
4 people found this helpful

John E.T. BlanchardReviewed in the United States on October 6, 2018
4.0 out of 5 stars
YES, ANOTHER STRANGE TEEN MOVIE
Verified purchase
CAN'T HARDLY WAIT is a strange movie (like NOT ANOTHER TEEN MOVIE) and I only bought it to see Lauren Ambrose - again. I probably won't watch it often as "send-ups" or "parodies" of movies can be tedious and silly. Still, Lauren Ambrose was totally different from "Leah Lever" in LOVING LEAH - delightful, but different.
One person found this helpful
See all reviews
Back to top
Get to Know Us
Make Money with Us
Amazon Payment Products
Let Us Help You
EnglishChoose a language for shopping. United StatesChoose a country/region for shopping.
© 1996-2021, Amazon.com, Inc. or its affiliates