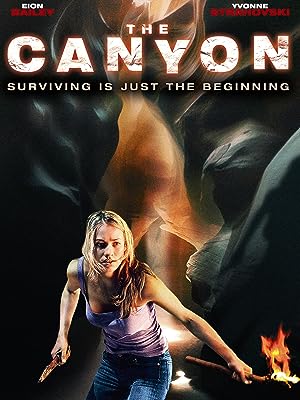 (380)
5.81 h 41 min2009R
Honeymooners Nick and Lori head off to the Grand Canyon for adventure and time alone together. Upon arriving, they hire Henry, who seems to have his own idea about the outdoor excursion, as their guide. When tragedy strikes, the newlyweds must fend for themselves. Discovering they are prey being hunted by something or someone, they desperately fight to escape the canyon alive.

St JackReviewed in the United States on December 8, 2021
1.0 out of 5 stars
Typical Woke Movie
Verified purchase
Woke drivel, where the Mary Sue survives, and the man is weak and stupid and arrogant and not even a (egads!) vegetarian!!!
Surely he will pay for not being a misandrist! Spolier alert, he does, and all the men die for being weak.
Also the end was stolen from The Mist, except with little emotional impact, more of a "WTF?!?" ending where the characters fates are tied to plot advancing, not logic. The characters do things because , well, plot, I guess. As you do.
I just thought she choked him out, not killed him, because strangulation takes a long LONG time and it is NOT pretty, but I guess this is the movie version of strangulation, gentle as a morphine overdose. Gentle as kissing a pillow. Nite-nite, weak man. Sleep tite.
I should give this more stars for the performance of the ever-stellar Will Patton, but I just cannot; he dies soon into the movie.
Very curious after reading the movie synopsis that after watching it, I realize that nothing was really hunting them, besides their own stupidity and the utter boringness of the Mary Sue, a typical modern Hollywood woman who is SUPER BORING because she is unrealistically perfect, superior, and above dying, apparently, because she is WAHMEN! She isn't a real hero like Ripley in the original Alien, to use an overquoted example, nope, not a real woman, with flaws and problems, who is so strong that she succeeds DESPITE those problems, nope, she is parfeck. She is whaman.

T. WilsdorfReviewed in the United States on May 10, 2020
3.0 out of 5 stars
Predictable
Verified purchase
It's obvious from the very beginning that guide was addle-brained and weird, why would they trek into the canyon with just him, and so few supplies? Someone else pointed out how they kept going fine on no food and water. And besides, anyone else notice how all movies now days have the women as the strong ones who survive and all the men are weak and wimpy and don't make it?? I've about had it with the feminists in Hollywood driving all the plots these days. It's not realistic and it's the only thing we ever get to see anymore, strong females, never strong men anymore.
31 people found this helpful

RHReviewed in the United States on December 13, 2021
2.0 out of 5 stars
OH COME ON!!!
Verified purchase
Look, anyone who makes the stupid decisions these people made, over and over again, deserves to be lost at the bottom of the grand canyon forever. I had to stop this thing half way through because their continuous stupidity and bad decision making was giving me a panic attack, and I no longer even cared what happened to them anyways. In other words, the script writing is poor, or lazy, or both. The acting was better than terrible, so I'll give it the two stars instead of one. But... whatever, this is a dumb movie... I might as well just make a movie about a guy who keeps sticking his hand in the running garbage disposal... the viewer will be like "well, if you keep putting your hand in there, your fingers will keep getting mangled. That's dumb, don't do it." End of movie.
13 people found this helpful

Kim WeekleyReviewed in the United States on November 24, 2021
1.0 out of 5 stars
The end was stolen from The Mist
Verified purchase
I would have given this movie 3 stars, maybe 4, but the ending is a clone of another movie. SPOILER ALERT for this movie and The Mist. In The Mist, the main character kills his son and the three other survivors that left the store with him. It was a mercy killing. Right after he kills them a military convoy passes him. In this movie, she kills her husband in what I assume is partly out of mercy. What happens right after she kills him? A rescue team finds them. The Mist was made BEFORE this movie. Stealing ideas from other people is lazy and unethical. If you don't have any more original ideas retire so someone with new material can take your place.
6 people found this helpful

Jim or DotReviewed in the United States on December 20, 2021
4.0 out of 5 stars
Good acting and photography. Entertaining but frustrating.
Verified purchase
Unless you are making a movie to demonstrate the dumbest things you can do in a survival situation you need to know a few minor things. Regardless of circumstances, if you are going to be in the middle of nowhere, you need a map and a compass. Most 10 year old kids in boy scouts or girl scouts can tell you that. A hardcopy topographical map doesn't take up any space and they are easy to find these days. If you have a good guide, even if he's reliable and not a drunk, you still still need your own. If you have a phone with a spare battery, remember it has a GPS receiver and GPS satellites are going to be working even if phone service isn't. Look at the GPS signal before you leave and write down the coordinates. When you get lost, look again. Even if no map is drawn you can take a few steps and determine exactly what direction it is and maybe how far you have to go. Does the area you are going to have phone coverage? Check in advance. Simple thing to do. Don't let a "no signal" message surprise you. You should already know if you will have service or not. If you are a long way from civilization your most immediate task is to find water. All else being equal, walk downhill, because water doesn't travel uphill. Don't think for a minute you can stop a bleeding artery with a leather belt by tugging on the end of it. You can't. Learn how to make a tourniquet. It's not that hard. Conserve energy and don't climb cliffs. Wherever water is, there will likely be some way to get food because everything needs water. Learn to build 3 signal fires. Don't put all of your supplies on one mule if you have four. Who would do that? There are a lot of other simple things but the main thing is common sense. This movie shows you how to best avoid using it.
5 people found this helpful

Avid readerReviewed in the United States on December 26, 2021
3.0 out of 5 stars
A guide dying is never good....
Verified purchase
I was torn between 3 or 4 stars, but settled on 3. I watched this primarily because I have done extensive backpacking from the North Rim of the Grand Canyon and in red rock country. This film was done, at least for the slot canyons, in Antelope Canyon, and likely the rest in the Tribal lands around there. The strength of the movie is the great scenery. We first meet eloped newlywed couple Nick and Lori, who expected to simply show up and take a mule trip down into the Grand Canyon. Nick is a bit of a show off, full of himself and there is no background on Lori. Desiring to go, they meet a grizzled guide in a tavern who says he can get a permit and take them down immediately. The guide, Henry, while full of stories, seemed the most authentic of the characters in the film. And when he got bit, he knew his fate and accepted it. The fall that Nick and Lori suffered was done extremely well and was very convincing. Now for the negatives. Neither of them could have lasted that long without food or water. Yes, smart to be chewing gum, but that only takes one’s mind off thirst, not quenching it. And Lori showed a skill set that was totally out of the blue, as nothing up to that point suggested she had those skills. When she went to get Henry’s knife, she built a cairn to guide her back. Really? And the ending was really disappointing. Too artificial. While they worried about being overdue and no one knowing, most likely the mules had returned home, alerting people that something was terribly wrong. Nice scenery though.
3 people found this helpful

Della blountReviewed in the United States on January 10, 2022
3.0 out of 5 stars
Two Idiots in a Canyon
Verified purchase
SPOILERS AHEAD.

So you have two recently-eloped lovers go on an unapproved hike through the Grand Canyon with some weirdo who was trying to make some money under the table. Tragedy strikes in the form of rattlesnakes and the donkeys these three were riding on scatter, including the donkey with all their supplies. So they haul around this poor dead man walking tour guide for about a day, until the venom kills him. Seems a little unrealistic, but apparently rattler venom can take up to 48 hours to kill you. Wild.

Then we have these two idiots wandering around a canyon trying to find their way out because now they're lost. For some reason, despite it being what looks to be the warmer months (where canyon temps average 85 degrees or more), the two aren't delirious and dead within the next half hour of the movie from dehydration. Okay, whatever.

At no point do these idiots do anything useful until the very end, where the lady suffocates her husband because he's already half dead (and then the deus ex machina helicopters magically swoop in from a call the wife was barely just able to make the previous day).

Wait, you might say, a call? Yeah. Lady had a flip phone. Flip. Phone. (Guess the movie budget ran short.) Instead of crawling up every big rock she could find, she messed around, fell off a rock, and broke the thing.

Why did I rate this movie a three? It's moderately entertaining because you can sit there and laugh at it.
One person found this helpful

TJ BurrReviewed in the United States on May 9, 2021
4.0 out of 5 stars
Grand Adventure in the Grand Canyon
Verified purchase
This is a good adventure movie with plenty of exciting scenes. The actors are solid. Mostly realistic of the Grand Canyon environment. Wolves are not widespread in the Grand Canyon, but there are probably a few wandering there. It is a hostile environment for the unprepared. It is also a place of incredible natural beauty. No zombies in the movie, thankfully.

I would have given it 5 stars if the ending had been different. They probably evaluating several options for an ending. I think they picked the wrong option. I don't want to ruin the movie, so I won't go into any detail on that.

Happy trails from ColoMountaineer.
4 people found this helpful
See all reviews
Back to top
Get to Know Us
Make Money with Us
Amazon Payment Products
Let Us Help You
EnglishChoose a language for shopping. United StatesChoose a country/region for shopping.
© 1996-2022, Amazon.com, Inc. or its affiliates