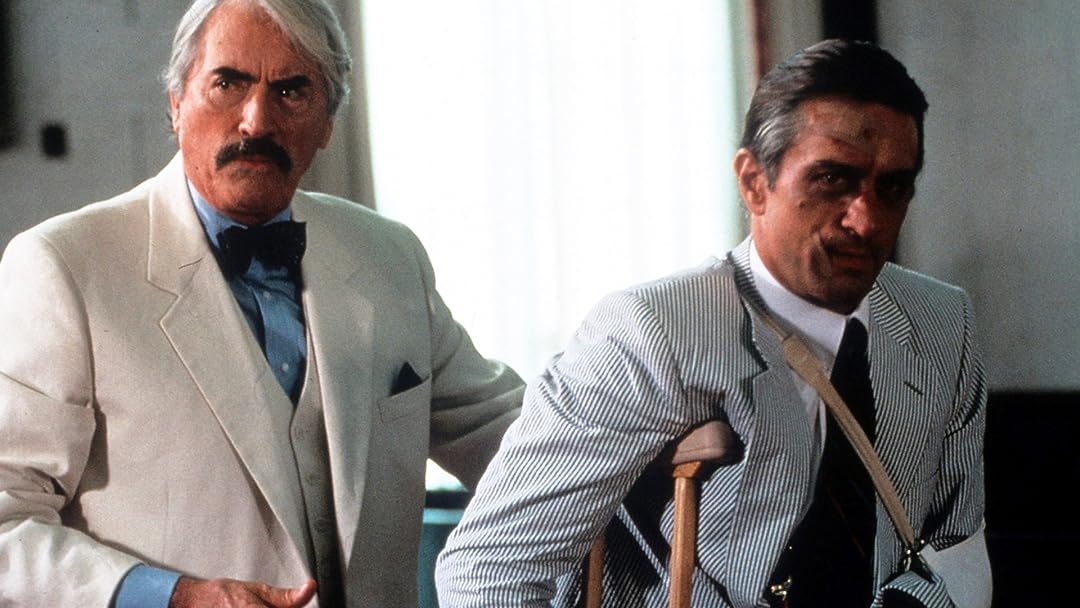 (2,524)
7.32 h 8 min1991R
Gripping story of a sadistic ex-con who returns to torment the family of the district attorney who put him away. Director Martin Scorsese's riveting remake of the 1962 film.

S. J. VolkReviewed in the United States on August 19, 2018
5.0 out of 5 stars
JESSICA, NOLTE & DE NIRO… CAPE FEAR GIVES BIRTH TO A HERO!!!
Verified purchase
“CAPE FEAR” (1991) This is one of the most intensely terrifying thrillers ever filmed. In this movie that lives down to its name, director Martin Scorsese shows why he is considered a master of cine-psyche suspense. And composer Bernard Herrmann (Day The Earth Stood Still) displays his musical genius that again gives audiences eerie goosebumps!

Opening with SUDDEN loud BLASTS of BRASS that kicks ass, the “Jaws-like” tempo of the music establishes the story’s tense and danger-filled atmosphere! The born-for-the-role cast is headed by a ripped and raging Robert De Niro as ex-con Max Cady. After serving 14 bitter years in prison for what he feels was his lawyer’s willful negligence, he has hardened himself into a revenge-seeking human missile!

The supporting cast reads like a Who’s Who of the original 1962 movie. By inviting the older actors into his vision of the story, Scorsese wisely avoids competing with the former version. He assimilates it. With a now grizzled Robert Mitchum, a distinguished Gregory Peck, and a familiar Martin Balsam; all of whom lend legitimacy to this extraordinary remake that can stand on its own as a brilliant fast-paced classic film noir.

As you watch fascinated, the four leading characters swiftly lose their polite social masks, each laying bare the raw savagery of their survival mode and final poetic justice. This is one movie that you won’t soon forget. (If this review was helpful in any way, please click on the “Helpful” key below. Thanks).

Killer Kitty 79Reviewed in the United States on November 24, 2019
1.0 out of 5 stars
Terrible Movie!
Verified purchase
Before I saw Cape Fear I have heard a lot of good reviews of it specially Martin Scorsese fans. However fans and critics can somethings over hype something and ignore anything bad about it. Cape Fear just throws you into the life's of the characters with no beginning almost feels like random scenes with one jumping in on the other.
I don't like how Nick Nolt, Robert De Niro and some of the other characters are acting in this film. At times I found it hard to understand what they were saying with their soft Southern accents.

Also Nick's character having affair with a woman that's less attractive then his wife. I guess when your rich and almost have everything you want you start getting bored with your life. Theirs no suspense or any build up in the story which feels flat along with it's characters. And as I said early the scenes are just rushed with one jumping to the next sense. Last the soundtrack doesn't really fit in with the film. Overall just a terrible movie.
6 people found this helpful

villainsruleReviewed in the United States on March 28, 2021
1.0 out of 5 stars
Not enough assault
Verified purchase
Watched this with anticipation that there’d be a big sexual assault scene at the end. I mean, they kept building up to it. The guy was stalking them and had a past of assault and his goal was revenge on the guy who put him in jail or whatever so he wanted to get back by assaulting his wife and daughter. so when the end comes, all he ends up doing is forcefully making out with the wife, doesn’t do anything to the 16 year old, nothing. Not to mention the dude is unrealistically invincible. Almost nothing can hurt him just because he was “toughened up” in jail. Watched this for Jessica Lange and that I saw a scene of her on YouTube from this movie yelling at the bad dude to “take” her instead of her daughter. But he never took either of them. 2 hours of disappointment. Built up to nothing. I like the sexual assault scenes because they are horrible and dramatic and sad and horrific. Without it this was very boring and unrealistic
One person found this helpful

Hans SachsReviewed in the United States on August 26, 2017
4.0 out of 5 stars
As Great An Actor as DeNiro Unquestionably Is...
Verified purchase
Robert Mitchum was unbeatable in the original, and I have to give the original equal rating in quality overall.

Word is that Scorsese wanted to Hitchcock-ize this movie (himself being a huge fan of the portly director), but I think he succeeded more in emulating Hitch's acolyte, Brian DePalma here. To quote Jerry Seinfeld "NOT that there's anything WRONG with that!", all three are terrific at their craft, it's just that Scorsese's movies before this all came across as...well, uniquely Scorsese.

Still, a very fine film that is so worth watching. The elements that were added to this remake (again, bizarrely NOT Scorsese-ian touches) are quite compelling and add dimension to Nick Nolte's character. Same with Jessica Lange...I'm not sure how she didn't get an Oscar for her portrayal, easily the equal of Lewis and DeNiro. And Nolte does a good job...he's probably fully aware he's no Gregory Peck, so fair enough.

I don't want to forget to mention the untouchable, redone Bernard Herrmann score from the original (plus some cuts from the amazing, unused score from the assassinator of the Hitchcock/Herrmann run of movie gold, Torn Curtain!).
7 people found this helpful

Kristopher KRReviewed in the United States on August 6, 2018
5.0 out of 5 stars
Cape Fear
Verified purchase
An underrated Martin Scorcese classic. Teaming up with De Niro once more to remake a film-noir, in turn making a thriller like no other. Great performances from DeNiro, Nolte, Lange, and a superb turn from Juliette Lewis which earned her an Oscar nomination. I remember seeing this years ago and loving it. Later, my son watched a few cartoon shows (namely The Simpsons) which parodied this film. He finally watched it and understands the humor in the parodies a bit more. Overall a fantastic film and a great blu-ray with great picture and sound and a ton of extra features to keep you entertained long after the film is over.
4 people found this helpful

J. WestReviewed in the United States on September 10, 2021
5.0 out of 5 stars
"Maybe I'm The Big Bad Wolf!"
Verified purchase
I'm glad that they remake this film from the 1962 version with Gregory Peck (The Omen). Without the original they wouldn't be a remake. You may think it had too much dialogue but I thought they did this right. With more intense, disturbing and drama. I like what Max Cady look like. The tattoos and disturbing behavior. A lot darker is what I'm looking for. And a former prisoner released and followed the Bowden family. I like the intensity part when Max was talking to Danielle in the theater. Did Max really killed Sam's dog, I think he did? They don't show that part. Juliette Lewis was eighteen when she did this film so she was old enough to do those sexual activity. Great performances and roles by Robert De Niro, Nick Nolte, Juliette Lewis & Jessica Lange. I would really recommend this if you like these type of film.

joel wingReviewed in the United States on July 4, 2021
4.0 out of 5 stars
Scorsese does Hitchcock in this thrilling remake
Verified purchase
This is Martin Scorsese’s remake of the 1960s classic. The first thing that stands out is that Scorsese used some techniques that he hadn’t used before such as going black and white and then negative during one scene, and then in another having Robert De Niro being superimposed over a background. It reminds me of Alfred Hitchcock. Bernard Herrmann also did the soundtrack who worked with Hitchcock on some of his classics. Speaking of De Niro he is really creepy and sinister from the start. He becomes like a living nightmare for Nick Nolte who is the father of the family De Niro is stalking. Nolte also shows a level of desperation which increases as the story progresses. Finally, Gregory Peck and Robert Mitchum who were in the original have roles as well. It all makes for an engaging thriller.

amber porterReviewed in the United States on March 26, 2021
1.0 out of 5 stars
This is really bad, can't lie
Verified purchase
I don't like to write a lot of reviews, but let's save some folks the trouble of watching this...for these reasons:
1. De Niro character dresses in embarrassing outfits, hair is creepy & sleezy, acts weird, and yet is successful at grooming Nolte's teenage daughter.
2. The teenage daughter is completely unrealistic through most of the movie...how she could fall for De Niro makes 0 sense.
3. Female characters aren't given control over their story; this is about Nolte and De Niro
4. The end is ridiculous....embarrassing... reminds me of opening the lost ark in Indiana Jones and the nazis faces start to melt off. Just bad.
5. De Niro can "jump the shark".
6. Just don't.
See all reviews
Back to top
Get to Know Us
Make Money with Us
Amazon Payment Products
Let Us Help You
EnglishChoose a language for shopping. United StatesChoose a country/region for shopping.
© 1996-2021, Amazon.com, Inc. or its affiliates