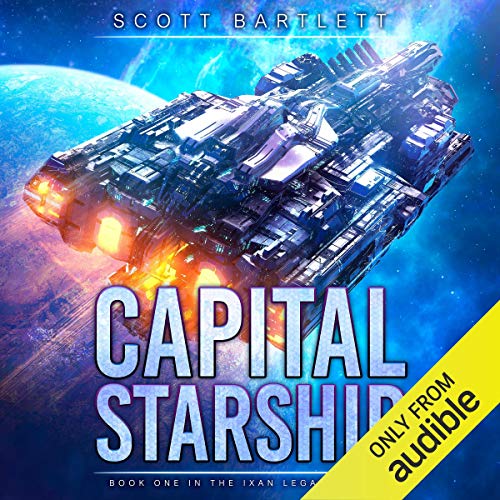 The Galaxy's Doomed Without Him

The Ixa smashed the galaxy to bits before they were defeated. Captain Husher has sounded the alarm in the decades since: the Ixa’s creators will return to finish the job.

But unlike Husher, the galactic government didn't battle the Ixa, and the politicians have convinced themselves that maintaining peace means limiting the ability to wage war.

Now the enemy has returned, with high-tech weapons that prove they haven’t limited their own combat capabilities in the slightest. If Captain Husher and his beleaguered supercarrier crew can't manage to stop the invaders, they will happily devour the galaxy whole.

4.3 out of 5 stars
4.3 out of 5
289 global ratings
How are ratings calculated?
To calculate the overall star rating and percentage breakdown by star, we don’t use a simple average. Instead, our system considers things like how recent a review is and if the reviewer bought the item on Amazon. It also analyzes reviews to verify trustworthiness.
Top reviews

Sue HTop Contributor: Fantasy Books
4.0 out of 5 stars Fighting Alone
Reviewed in the United States on December 8, 2017
Verified Purchase
Capital Starships is the first book in the Ixan Legacy series. If you are looking for a well written SciFi Military book, this is a good one to read. You can read this as a standalone book but it does end in a soft cliffhanger for the next book to be written in the series. There is a lot of violence. This is a military thriller after all.

The book blurb adequately describes the book so I am not going to repeat that information here. The author has done a good job of keeping elements of his original Ixan Prophecy future universe that was full of aliens, old tech and new tech, people in power who will do anything too continue to remain in power. Then combine that with these enemies of old as well as new problems to deal with. As usual, everything and everyone are not as they seem. Please be warned that there are political themes in this book. It’s probably not a good idea for you to read this if you are someone who requires a safe zone.

Kindle Customer
5.0 out of 5 stars Written in 2017, reflects today's political chaos
Reviewed in the United States on October 6, 2021
Verified Purchase
I am flabbergasted that the theme of this book is about having the council of the city aboard the vesta requiring the crew to take awareness training! It sounds like the CRT that the left wing radicals are pushing on us now. How prescient was scott is writing this on 2017? And, how unfair it is to husher, as much as it is unfair to our children now?! Husher witnesses people playing games on their oculenses and remarks that people used to have to use their imaginations and have some creative input. Whereas, now they're spoon fed everything, including what they should think.. Sound familiar? Maybe video games and social media today are the root cause of all the devisiveness we have today. This book is too much a reflection of our broken society to be coincidental, but before it's time! Way to go, Scott! AND, Scott thoroughly covers PTSD, how it affects Husher. He even offers a cure. Then he deals with the concept of evil. Good speculation on Warp drives, decoherence & worm holes, all explored. So it's more than a space opera! Of course there's a great space battle between the vesta and teth and a ground action for the marines. There's a surprise appearance by someone at the end. Jake also finally appears in prep for the next book. Enjoy!
Read more
Helpful
Report abuse

Jas PTop Contributor: Star Wars
VINE VOICE
5.0 out of 5 stars Bartlett is Back! If you liked the original Ixan Series, you will love this!!
Reviewed in the United States on January 7, 2018
Verified Purchase
Bartlett returns to the Ixan series, taking us back to our Universe and Captain Vin Husher.
It is over 17yrs since the events of the Ixan War that devastated the Galaxy, leaving Humanity shattered, multiple other races decimated and destroyed, and the Galaxy in turmoil.
With great effort an International Union was established to bring some unity back to the Galaxy. There is an uneasy peace in the Galaxy between all of the different races, the only exception being the Gok, which refused to join the IU, but has stayed away from nearly everyone else. Whilst Husher has attempted to warn everyone of what he was warned of, the AIs, and the galaxies impending doom, no one really believes him, and has moved towards a more peaceful attempt at existence. Humanity as such, has created a new class of starship, the Capital class of Starship, that is part warship, but is also a living city, with an entire population of thousands of people living in the heart of the ship. The warship part is only there to protect them.
Husher is the Captain of one of these ships, but he is also ‘governed’ by a Mayor and a Council that can have a say on how the ship is run, to avoid issues with other races, and to make sure that the Civilians aboard the ship are kept happy. Thus this is now a very political role, and one that Husher is not well suited for.
The story is incredibly complex, and brilliantly done, taking us through this new galaxy, exploring these new political structures, and how it has impacted on the characters that we used to know, Husher, Fesky and so many others. There are several new characters as well aboard the Capital ship, all of them utterly fascinating in their roles. Some are there to be useful to Husher, but it seems that many are there to make trouble for him as a new threat is unveiled. It quickly becomes clear that the Ixan were not destroyed as once thought, and have returned to the galaxy, and this is where the story gets very interesting.
Bartlett has taken his previous universe and tweaked it, giving it a different look, one in which humanity are now viewed in a very different way.
This is an intriguing read, with in-depth characters and plots, multiple sub-plots, and detailed political concepts that make for a mesmerising read that you won't be able to put down. There is also some incredible space combat between not just the new Capital class, but some other new ships that makes you wish this could be converted to a visual form for the special effects. Bartlett does a magnificent job of detailing these combat scenes though so you feel like you are in the thick of it.
As well as some very clever twists and turns within the plots, there are also some fantastic surprises towards the end that make this even better.
The original Ixan series was a brilliant piece of writing, and this series looks like it is going to be better again, can’t wait for part 2. If you liked the first series, this is a must.
Read more
4 people found this helpful
Helpful
Report abuse

Rex
4.0 out of 5 stars Off to a stellar start!
Reviewed in the United States on January 8, 2018
Verified Purchase
“Capital Starship” is Bartlett’s first entry in his latest series, “Ixan Legacy.” “Starship” returns us to the Milky Way, where humanity and other species have picked up the fallen pieces of the Ixan war. Bartlett’s new series is off to a stellar start!

“Starship” is a masterpiece in terms of literary criticism. Bartlett does an amazing job of taking elements from today’s societies and warping them in an extreme version which mirrors our reality. Reverse discrimination, employment quotas, white privilege, etc., you will be hard pressed not to find an area Bartlett does not weave into his story. Not every character is as well-developedt, but by the end of the novel, it was apparent this was by design.

In honesty, this reviewer found the beginning of the story slow, but in fairness to Bartlett, the groundwork had to be laid to give understanding to new readers just joining the series, and to those of us, who wondered what happened to the victors of the Second Ixan War. “Starship” sets the stage for a great series!

If you have enjoyed Bartlett’s previous novels in the Ixan universe, I believe you will love his latest entry.

Note: This reviewer received an ARC in exchange for an honest review.
Read more
One person found this helpful
Helpful
Report abuse
See all reviews

George P. Jenkins
5.0 out of 5 stars New Author to me
Reviewed in the United Kingdom on March 21, 2019
Verified Purchase
I have enjoyed the read, very well written, easy to understand much of the 'Military' jargon and tactics being former military. Kept me reading well past my bedtime and looking for the next one. Also, not really a Sci-Fi buff, but maybe I'll look at a few others.
Read more
Report abuse

Gabrielle
5.0 out of 5 stars Good Sci Fi
Reviewed in the United Kingdom on December 17, 2017
Verified Purchase
Loved it! Especially the way the author mixes current scientific knowledge with science fantasy in such a way that even a geek can find it believable. First one I have read that shows how politics messes everything up - VERY realistic!! Plus no romance, what a relief! lol Desperate to read some others now!
Read more
Report abuse

Michael Friend
4.0 out of 5 stars Highly entertaining
Reviewed in the United Kingdom on February 4, 2018
Verified Purchase
Easy to read space opera which sometimes gets bogged down in politics! Sounds like life as I know it. Well done.
Read more
Report abuse