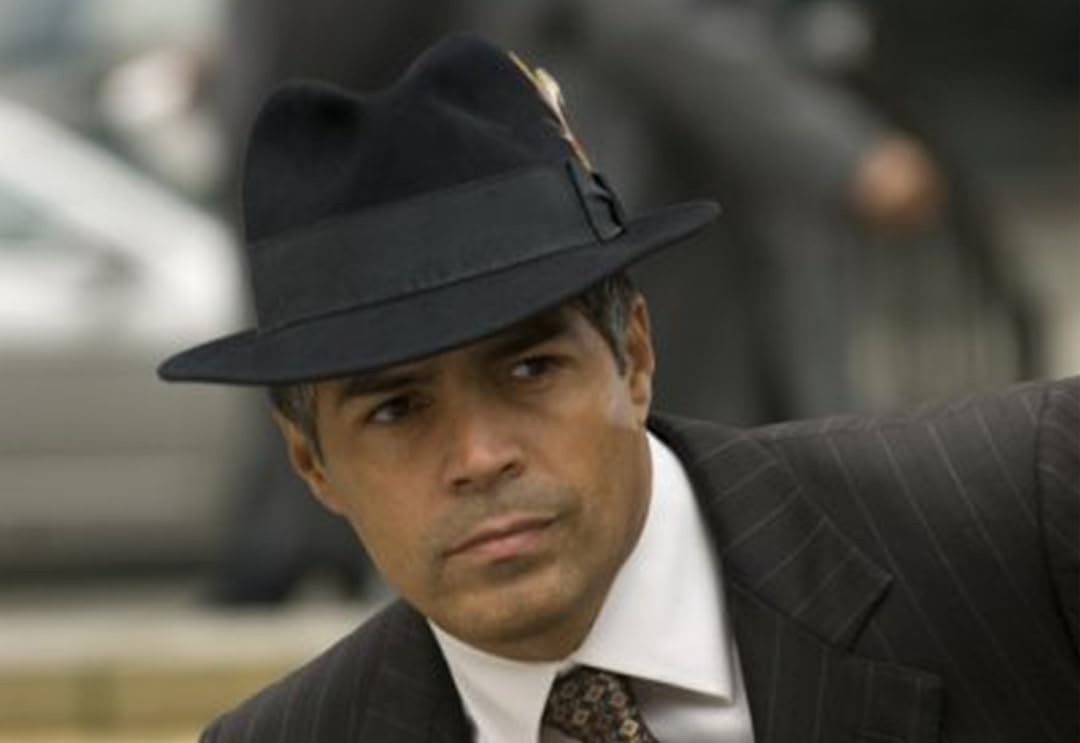 (965)
7.12011TV-14
Set before the events of Battlestar Galactica, Caprica follows two rival families - the Graystones and the Adamas - as they grow, compete, and thrive in the vibrant world of the peaceful 12 Colonies, living in a society close to our own. Entangled in the burgeoning technology of artificial intelligence and robotics that will eventually lead to the creation of the Cylons, the two houses go toe-to-toe, blending action with corporate conspiracy and sexual politics. Caprica will deliver, intrigue, political backbiting and family conflict in television's first science fiction family saga.

Christopher AverettReviewed in the United States on September 27, 2021
3.0 out of 5 stars
Validation Story or Prequel to Battlestar Galactica 2004
Verified purchase
Hey, I bought this series, as Prequel's tend to explain the premise behind the actual series and what the statement's the creators/directors/writers and producers of Space Opera entertainment are attempting to make. Of course this series is not the Battlestar Galactica of the 1978, where the enemy (Cylon's) was created by someone else, and humanity gets into a fight with them, due to an act of kindness. the general premise of the BSG 2004 show is somewhat twisted in that humanity is the creator of the enemy and in this case. The under-currant problem is monotheism Vs polytheism as perceived by adolescent children of wealthy parents, set to the backdrop of a space opera with "ALL!!" the same failings of our own cultures here on earth. If you haven't raised children you will miss the finer point's of the series, as children always think they are right, and that they know Everything!!, until one of their friends go zealot and blow themselves up with plastic explosives over a theological concept that they barely understand.
So, Yes this series brings all your favorite cultural problems to life. The premise of the re-boot is weak and hardly original. The series leans heavy on Greek mythology, Astrology and Biblical ideals. But doesn't go as far as dragging the Anunnaki into the mix. But when the young kid blows himself up it smacks of Islamic monotheism at it's worst. Remember this show came out just after the New York Twin-Tower event. All that to one side, the Cylon's appear to be programmed with the mentality and personality of a distraught adolescent girl that has a major grudge against her parent's. Is it any wonder that the Cylon's hate humanity!!. That would make the over all premise of this space opera one of: Confused adolescent daughter starts galactic size space war over ill conceived theological ideals and hatred of her parents. Did Glen Larson really green light this project?

RDDReviewed in the United States on January 10, 2018
5.0 out of 5 stars
Good Follow-Up to "Battlestar Galactica"!
Verified purchase
Ronald D. Moore and Remi Aubuchon team up to create this prequel series set 58 years prior to the reimagined "Battlestar Galactica." The show focuses on two families- the Adamas and the Graystones, both of whom lose family members in a terrorist attack by a monotheistic group. Efforts to bring back deceased family members lead to examinations of religion, culture, the creation of the Cylons, and more. Though this show examines many of the same themes as "Battlestar," the tonal differences work in focusing on a society immediately prior to its fall. There are some very minor continuity issues between this and "Battlestar" that likely would've been fixed if the series hadn't been cancelled, but there's a lot here for fans who want more of Moore's vision. The later prequel work, "Battlestar Galactica: Blood & Chrome," includes some slight references to this show. My only complaint is SyFy's habit of releasing half seasons. This 1.0 season only contains the first half of the show and fans must purchase 1.5 to get the rest.
4 people found this helpful

jmpcodesReviewed in the United States on August 11, 2021
4.0 out of 5 stars
Not your daddy's Battlestar Galactica
Verified purchase
Very harsh story with too much violence for some. I watched it through twice a few years ago and have recently started watching it again. The story is a fascinating glimpse into some darker aspects of humanity and an imaginative possible birth of A.I.
Interesting, evolving (though maybe a bit one single-minded) characters and a consistent visual experience and sound track help keep one coming back for more.
There was easily enough story left for another season as the series drew to a close, but instead of doing a second season and pacing it out, too much was crammed into the last episode or two. I am glad they tried to put a bow on it, but it was a little jarring. Even with that rather abrupt ending, I suspect Caprica will be considered a great series for a long time.

Tony GrundonReviewed in the United States on April 26, 2017
5.0 out of 5 stars
A corrupt world teeters on the edge but finds some redemption
Verified purchase
A corrupt society where many people have lost their inner drive to live. The result is cults, mindless escape into VR worlds, and plots and corporate cronyism. Sometimes you feel sympathy for the Soldiers of the One, who want to end the hypocrisy of a culture that causes pain to so many. Their religion may seem extreme, but is based on their faith in one true god. Also likeable was the Adama family who just wants a way compete against their rivals. The Greystones represent corporate croynism and excess of power. But you still feel the pain of the loss of their daughter. Is there some nihilism in the younger generation who just wants to trance out into the VR world? Is it a surprise they join SOTO as easy recruits? What can we learn about our own culture from this show?
5 people found this helpful

John GaltReviewed in the United States on September 7, 2020
2.0 out of 5 stars
Cancelled just as the writing started to improve
Verified purchase
Even though I'm a big fan of BSG, I found this series tough to watch. The characters do stupid, inexplicable things, and the technology is REALLY hard to believe (a program that can't be copied? Or maybe it could be copied, but no one bothered to? No idea.) There aren't many likable characters, either. Several times it seems like they're starting a new storyline, only to abandon it after a couple of episodes.

The series was on a slight upswing toward the end--I found myself caring a little bit about what happened-- but I guess it was too little, too late. I'm not sorry I watched it, but I won't be re-watching it.

ArnoldReviewed in the United States on April 28, 2013
5.0 out of 5 stars
adds depth to Battlestar Galactica
Verified purchase
Unlike most prequels, Caprica not only provides a backstory but also enhances your appreciation of the original source material. There were a lot of things that bothered me about the Battlestar Galactica reboot, including the fact that the Cylons seemed so human and were monotheistic. It seemed like too far a leap for robots. Caprica provides a neat explanation for these.

First, we learn that the Cylon robots were imbued with a human personality. There's a fairly realistic (or "realistic") account of how a human personality could be transferred to a robot, basically treating the human soul as an aggregation of the data stored in the human brain. The personality transferred was also a devout monotheist which explains how that "trait" got passed down to subsequent generations of Cylons. And to boot, it's the personality of an emotionally troubled teenage girl - what a neat twist!

In addition to the Cylon origin story, Caprica also explores other moral issues. One theme throughout the series is the dangers of a virtual reality world, not unlike an amped up internet, in which people are allowed to act without inhibitions. For some, this part might seem out of place. The frequent images of teens clubbing and 1930s noir gangster scenes are a bit jarring. However, they're not just extraneous - they come to an interesting resolution near the end of the first season.

The characterization is a mixed bag. I love how Zoe Graystone, a teenage girl whose "programming" is installed into the first Cylon, struggles with so many issues, such as faith, reality, and love. The Adama family saga is also interesting. We'd heard a bit about Joseph Adama in the Battlestar Galactica series, but seeing him morally compromised provides a fascinating insight into the future Bill Adama's family.

The Graystone parents on the other hand are a mixed bag. Eric Stoltz brings a compelling mix of gravitas and weariness to Daniel Graystone. When he's depressed, you really see the weight of the world in his eyes. However, both he and his wife, Amanda Graystone, often find themselves making stupid decisions. In a few places, Amanda just goes off the deep-end in doing something incredibly stupid. It never completely destroys the show because while the decisions are stupid, they are human. However, I found myself losing respect for the characters as the show went on.

The show actually came to a pretty fitting conclusion at the end of season 1, despite having been cancelled. One other thing that bothered me though was that it seems the producers felt the show needed more action and intrigue. By season 1.5, some of the more interesting character development was dropped and the subplot with the terrorists became more prominent. By the final episode, the Graystones are running around Caprica trying to essentially stop a ticking bomb. There are plenty of other "ticking bomb" shows like 24 and I think Caprica lost a bit of something in trying to mimic them.

Overall, if you liked BSG, I think this show will help you make sense of the Cylons. Even if you weren't a BSG addict, Caprica is an interesting sci-fi show that had a lot of potential and certainly didn't deserve to be canceled.
9 people found this helpful

CoryGReviewed in the United States on November 18, 2018
4.0 out of 5 stars
Not bad towards the end of the season
Verified purchase
This started to get good toward the second half (even just after the first few episodes, really.) It seemed to come at a time where people were switching to binge watching, I couldn't get into it when it was on TV and it seemed like garbage at the time, binge-watching the entire season though isn't bad. The continuous episode-to-episode cliffhangers are what really sap the momentum from a series like this and make it unwatchable on TV. That said, the final "next season on Caprica" line is terrible since there was no next season.
One person found this helpful

rdaaamgReviewed in the United States on August 12, 2016
5.0 out of 5 stars
Caprica Season 1.0
Verified purchase
This is the prequel to Battlestar Galactica series and shows that the Cyclons are created and why they are have so much hatred for the human race. The series follows two families the Adama's and Greystone's and how tragedy brings them together. They work together to find out what happened to members of their family that were killed when train is blown up by terrorists and everyone's lives are changed. This series answers questions about the families and the creation of the Cyclons. This is a great series to watch.
4 people found this helpful
See all reviews
Back to top
Get to Know Us
Make Money with Us
Amazon Payment Products
Let Us Help You
EnglishChoose a language for shopping. United StatesChoose a country/region for shopping.
© 1996-2021, Amazon.com, Inc. or its affiliates