You've subscribed to Captain America (1968-1996)! We will preorder your items within 24 hours of when they become available. When new books are released, we'll charge your default payment method for the lowest price available during the pre-order period.
Update your device or payment method, cancel individual pre-orders or your subscription at
Your Memberships & Subscriptions
There was an error. We were unable to process your subscription due to an error. Please refresh and try again. 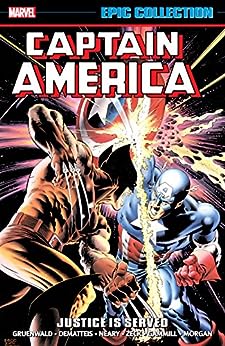 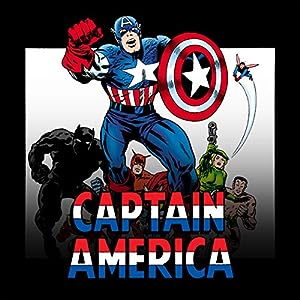 Brian Reaves
VINE VOICE
5.0 out of 5 stars Great collection of a great storyline
Reviewed in the United States on May 17, 2017
Verified Purchase
When the Scourge first appeared in Marvel Comics, he was this terrifying entity. Here was a "hero" who hunted down villains and killed them in cold blood, always leaving them with "Justice is served" as his parting statement. The character appeared across a few comics (all collected here) before settling in with Captain America as the main title to finish his story. Most of the villains who died were C and D level villains, but it was interesting at the time to see someone actually finishing out a few characters. The Scourge was a a master of disguise, and any random character in the story could suddenly pull a gun and kill the villain. It was a pretty interesting concept.

Captain America's first real solo fight with Wolverine happens in this collection as well (before they team up, as all heroes eventually do). The only disappointing thing is the ending. I won't give it away, but a lot of fans were disappointed by the Scourge's ultimate identity when it was revealed. There was a lot Marvel could have done with this--and they did later when Jack Munroe (Nomad) was brought in as the new Scourge later in Thunderbolts--but ultimately they sort of cheated the ending. They even hinted to more for later, but never did anything for over a decade.

This is a strong collection of Cap's run during the height of his popularity in the 80's. You can't miss with this one, even with the letdown at the ending. Just enjoy the ride and see how "justice is served".

Jason1749
4.0 out of 5 stars Mark Gruenwald's Best Cap Work
Reviewed in the United States on June 9, 2017
Verified Purchase
Some of my favorite Captain America comics by Mark Gruenwald. Starts up with Cap venturing across America and chasing down the supervillain serial killer The Scourge and ends with the first issue of the Cap No More storyline. Great 80's comics.
Read more
4 people found this helpful
Helpful
Report abuse

Anthony Paschal
4.0 out of 5 stars Justice is served
Reviewed in the United States on November 16, 2017
Verified Purchase
Justice is served too bad marvel can't make great stories like this any more the old books will always outshine the new which all suck by comparison.
Read more
4 people found this helpful
Helpful
Report abuse

Gimpdaddy1
5.0 out of 5 stars This was a blast!!!
Reviewed in the United States on July 18, 2017
Verified Purchase
This novel was excellent reading! It was more than just a collection of stories, it ultimately gave insight into the mind of the character. The last story especially helped you understand just how Captain America felt, and why he couldn't compromise who he was, and more importantly, what he believes!
Read more
3 people found this helpful
Helpful
Report abuse

Albert Stashin
4.0 out of 5 stars All the way with Captain A.
Reviewed in the United States on March 8, 2020
Verified Purchase
Captain America at his finest.
Read more
Helpful
Report abuse

Ingenjor Andree
5.0 out of 5 stars Looks Good!
Reviewed in the United States on June 25, 2017
Verified Purchase
The Epic collections look really good. Being an experienced (older) comic reader I was familiar with these issues. Not the greatest run in Cap's history, but entertaining.
Read more
3 people found this helpful
Helpful
Report abuse
See all reviews

Temple Phoenix
4.0 out of 5 stars Cap Searches His Soul
Reviewed in the United Kingdom on May 7, 2017
Verified Purchase
The latest Captain America volume to hit the Epic Collection line covers material from 1986 and 1987 (with a few introductory pages from 1985, as we'll discuss in a sec) and follows on directly to the already-available Society of Serpents volume, with Mark Gruenwald's able pen continuing the adventures of the star-spangled Avenger. However, this one starts a little differently to other Epics we've seen.

Throughout 1985, in the pages of a whole bunch of different comic titles, readers had seen a mysterious figure, the Scourge of the Underworld, gun down a whole array of minor and has-been supervillains. All those pages, and a John Byrne issue of Marvel Fanfare also featuring Scourge (although starring the Hulk) are collected at the front of this book so that readers don't have to miss a thing as the storyline reaches a climax in the pages of Cap's own book. It's a nice touch, and much appreciated.

Apart from the big Scourge plotline, this era sees Steve searching for a place in the modern world, taking to the roads in a customised van to take his particular breed of patriotic justice to the whole nation. There are some fun stories, including a tussle with Flag-Smasher that leads Cap to take an action that haunts the book for months afterwards, an annual team-up with Wolverine and a mission with old buddy Nomad, but it's when rival Super-Patriot turns up that the book really takes off. Faced with a louder, brasher, stronger patriotic hero, Cap has to examine whether he's still the right man for the job.

Gruenwald really had a knack for getting to the heart of the character, as we see Cap's soul laid bare and examine just why he is a rather unique hero. It all leads up to a dramatic cliffhanger at the end of the volume, but before then we still have the introduction of wacky sidekick D-Man, an absolutely wonderful story with Frog-Man of all people, and a trip to the late Red Skull's haunted house.

Art is largely by Paul Neary, who I found solid enough but somewhat spectacular, but there is some wonderful work by Mike Zeck and Kerry Gammill in a few of the issues. Overall, though, I definitely felt like the writing overcame any shortcomings in the art.

Extras are fairly restrained this time round, or at least they are if you don't count all the Scourge pages from the start of the volume. We have a couple of letters-page excerpts that helpfully give the first appearances of all the dead villains, a Marvel Age page featuring Baron Zemo, two pages of Fred Hembeck comic strip, a house ad for the Scourge storyline, original art by Neary and Zeck, and a selection of covers from trades that collected some of the stories here.

Definitely an interesting period in Cap's life, with some reasonably deep discussion on what it means to be a hero, patriotism, killing, and government oversight. If that makes the book sound heavy, far from it - there's still plenty of derring-do, just with a nice layer of heart.
Read more
2 people found this helpful
Report abuse

Hartley
4.0 out of 5 stars Another great Marvel Epic volume.
Reviewed in Canada on March 18, 2019
Verified Purchase
Another perfect slice of a great era in Captain America comics and marvel in gen
Read more
Report abuse
See all reviews