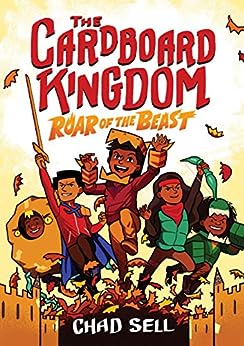 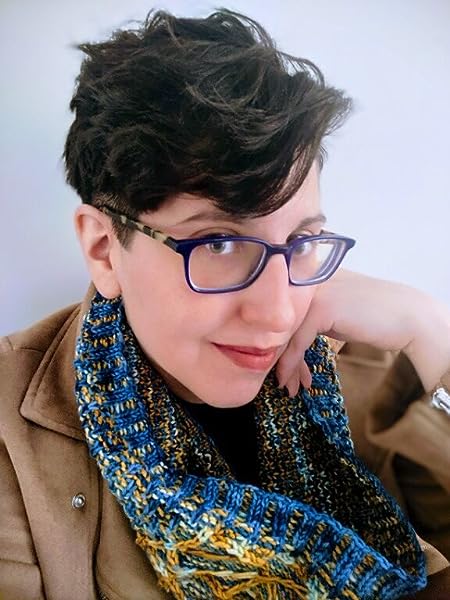 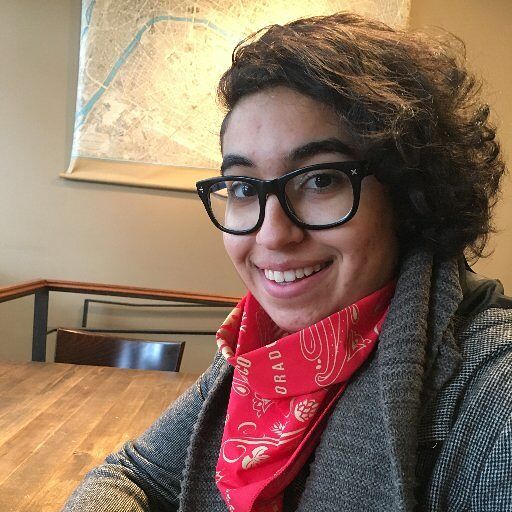 The Cardboard Kingdom #2: Roar of the Beast Kindle Edition

by Chad Sell (Author) Format: Kindle Edition
Book 2 of 2: The Cardboard Kingdom
See all formats and editions
Sorry, there was a problem loading this page. Try again.
Perfect for fans of Raina Telgemeier and All's Faire in Middle School, this sequel to the Eisner Award-nominated The Cardboard Kingdom follows the kids as they solve the mystery of a new neighborhood monster.

A mystery is afoot in the Cardboard Kingdom.

Vijay, the Beast, renounces his title after being bullied by neighborhood teenagers. No one--not his big sister Shikha or his friends--can seem to draw him back out of his shell.

That very night is when it starts. At first, no one believes Nate, who breaks his leg trying to pursue what he saw from his bedroom window. But then there's another, and another. An unknown monster has been spotted roaming the Kingdom after dark. It's ghastly, it's quick, and it might even have giant tentacles. Or claws. Or wings. Okay, there might be some varied testimonies on what exactly this monster looks like.

Forget Halloween--the newly minted Monster Mashers will go to any lengths to protect the Kingdom and uncover this mystery. But how did the monster get here? What does it want? And mostly importantly, who is behind its creation?

"Sell weaves together an engaging, endearing ensemble cast with a diverse range of gender identities and gender presentations, races, ethnicities, and body shapes.” —Kirkus Reviews --This text refers to the paperback edition.

Chad Sell's first children's graphic novel was The Cardboard Kingdom, which he illustrated and co-wrote with a team of ten collaborators. This same team came together again to create The Cardboard Kingdom: Roar of the Beast. Chad's first full-length solo project, Doodleville, is set in Chicago, where he lives with his husband and two cats. @chadsell01 --This text refers to the paperback edition.

Gr 4–7—This sequel to the highly acclaimed Cardboard Kingdom sees the characters growing up and facing new conflicts. Autumn is in the air and, with it, big plans for Halloween—which are disrupted when Nate accidentally breaks a leg investigating what appears to be a mysterious monster. The continuing search for the creature and the danger it represents play out alongside encounters with hostile local teenagers. Characters are isolated by fear, self-doubt, loneliness, hubris, depression, and secrecy, but they are ultimately united in their friendships and concern for one another. The artwork serves the children's world of make-believe, switching freely between plain reality and how they see themselves in character. Sell employs emotive faces for this diverse bunch, with lots of curved eyebrows and unique expressions across countless group shots. The monster catalyst leads to subtle but significant character developments, including the blossoming romance between Nate and Miguel. Broken up into themed chapters, each with its own cover image, the narrative hops around a neighborhood's worth of mischief. VERDICT Another engrossing adventure that rewards imagination and empathy.—Thomas Maluck, Richland Lib., SC --This text refers to the library edition.
Read more

HolsGG
5.0 out of 5 stars Hit with Middle Grade Kids
Reviewed in the United States on June 5, 2021
Verified Purchase
My 10 year old niece absolutely devoured this book. She read it in less than a day and is sad there aren't more in the series. Big hit follow up to the first one for her.
Read more
3 people found this helpful
Helpful
Report abuse

Sheena B.
5.0 out of 5 stars A great continuation from the first Cardboard Kingdon novel
Reviewed in the United States on June 24, 2021
Verified Purchase
According to my nephew, "this book showed a balance of imagination and silliness of trying to get rid of a monster before Halloween".
Read more
3 people found this helpful
Helpful
Report abuse

Amazon Customer
5.0 out of 5 stars Great book
Reviewed in the United States on August 6, 2021
Verified Purchase
My daughter loves a quality of these graphic novels! She's just starting to read going into third grade and is enjoying what these books have to offer! Highly recommend!
Read more
One person found this helpful
Helpful
Report abuse

Fraulein Michaud
5.0 out of 5 stars Very pleased
Reviewed in the United States on November 15, 2021
Verified Purchase
My son read the 1st Cardboard Kingdom and he bed it. He couldn’t wait till the 2nd one came out. He said it was a good book. I’m pleased with this purchase.
Read more
Helpful
Report abuse

Kenya Starflight
5.0 out of 5 stars Another fantastic adventure in the Cardboard Kingdom
Reviewed in the United States on June 13, 2021
The first book of the Cardboard Kingdom series (aptly titled "The Cardboard Kingdom") was a delightful read -- an ode to the power of imagination, friendship, and being yourself. It was more of a collection of interlocking vignettes than a cohesive story, but it was still a great deal of fun and great for both the young and the young at heart. "Roar of the Beast," the sequel, has an actual story arc, but still interconnects the stories of the kids in this neighborhood and their alter-egos... and how the bonds of friendship see them through a difficult time.

When Vijay, a.k.a. The Beast, suffers blows to both body and ego during an altercation with the neighborhood bullies, he gives up his alter-ego and sinks into a funk. But his friends' efforts to try to cheer him up are interrupted by the appearance of a terrible monster! And when Nate, a.k.a. The Prince, breaks his leg trying to identify it, the neighborhood kids are determined to discover just what it is. What is this creature? Who created it? Why is Alice, proprietor of the Dragon's Head tavern (run out of her garage) acting so secretive? And will the monster ruin Halloween... and the friendships of the neighborhood kids?

Just like the first book, the artwork in this book is nicely stylized and colorful, with great designs of both the kids' cardboard costumes and their alter-egos. The color scheme is slightly altered from the first book, which helps show the passing of time and changing of the seasons -- the first book took place mainly in summer, while the second book takes place during autumn, meaning warmer colors and more earth tones. The panel layout is easy to follow, and the book makes nice use of splash pages and dialogue-free panels to help convey the story through pictures as well as words.

It's also nice to see the kids from the first book grow and develop further in this book. And amazingly, almost every character from the first book gets their moment to shine in this book, and sees moments of growth. Some only get a few pages, such as the Robot and the Banshee, but they still have their moments to shine and to show their personalities. Hopefully they'll get a little more focus in the third book... and I do hope there's a third book.

The Cardboard Kingdom books are great for kids of all ages, even ones who think they've outgrown the world of imagination and playing with cardboard boxes. And it's great to revisit these characters and see how they've grown. Crossing my fingers for a third volume!
Read more
3 people found this helpful
Helpful
Report abuse

Paul C
5.0 out of 5 stars Excellent sequel for this series!
Reviewed in the United States on June 3, 2021
Your Imagination + Cardboard = The Construction of Fun!
Publisher’s Blurb:

A mystery is afoot in the Cardboard Kingdom.

Vijay, the Beast, renounces his title after being bullied by neighborhood teenagers. No one–not his big sister Shikha or his friends–can seem to draw him back out of his shell.

That very night is when it starts. At first, no one believes Nate, who breaks his leg trying to pursue what he saw from his bedroom window. But then there’s another, and another. An unknown monster has been spotted roaming the Kingdom after dark. It’s ghastly, it’s quick, and it might even have giant tentacles. Or claws. Or wings. Okay, there might be some varied testimonies on what exactly this monster looks like.

Forget Halloween–the newly minted Monster Mashers will go to any lengths to protect the Kingdom and uncover this mystery. But how did the monster get here? What does it want? And mostly importantly, who is behind its creation?

I had an absolute blast reading and reviewing the Chad Sell’s first Cardboard Kingdom graphic novel… And when I saw that the author/ illustrator created Roar of the Beast, I knew I had to check it out.

I was not disappointed: All the characters are back from the first book… and conflicts arise as they ramp up for Halloween. Each has a particular vision of how they want this special holiday to go… Yet, things get in the way… bullies and… a monster?

The artwork, the diversity of the characters, and the individually-crafted storylines create a perfect sequel!

Chad Sell’s Website: Click through to find coloring pages inspired by the series… and instructions to make the Cardboard Kingdom’s masks! I already downloaded a couple designs to work on with my own kids. Also of note: while writing this review I took a minute to write a friend an email about this book. I love this series!
Read more
One person found this helpful
Helpful
Report abuse
See all reviews

Jun Cao
5.0 out of 5 stars One of the Best
Reviewed in Canada on January 14, 2022
Verified Purchase
My kid borrowed The Cardboard Kingdom #1 from school library, and ask one as a gift for Christmas. He loves this book so much. I noticed there is Cardboard Kingdom #2, then I bought it too. Those are his favorite book now
Read more
Report abuse
See all reviews