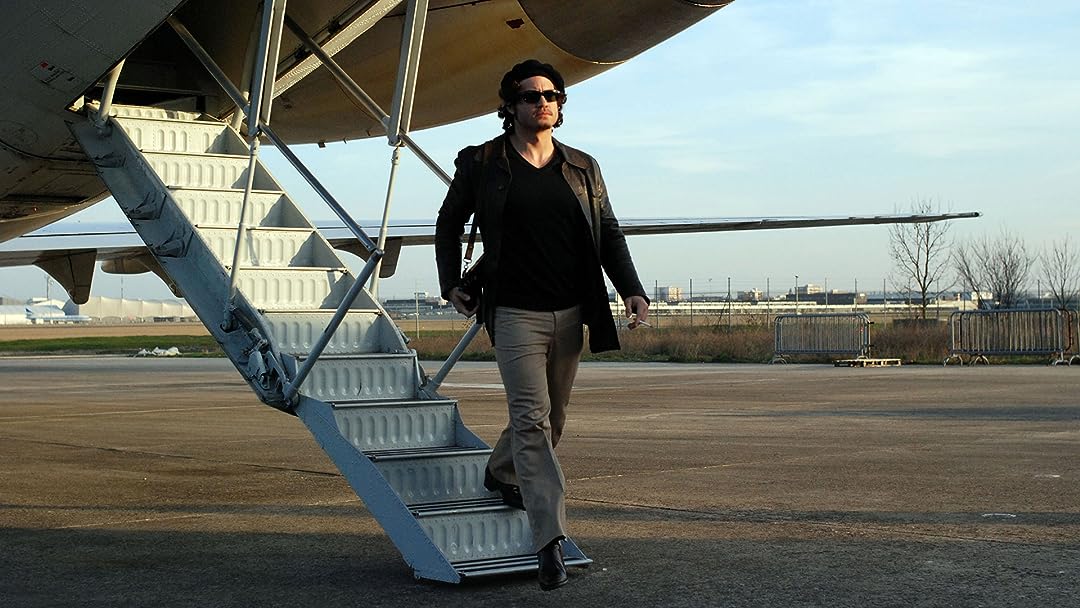 (261)
7.62 h 45 min201018+
Olivier Assayas electrified the Cannes Film Festival with CARLOS, his epic and definitive portrait of the notorious international terrorist known as Carlos the Jackal, who masterminded a wave of terror attacks in Europe and the Middle East in the '70s and '80s.

SMReviewed in the United States on November 5, 2019
5.0 out of 5 stars
Incredible. Make sure you see the full version.
Verified purchase
The 5.5 hour version of 'Carlos' has to be one of the best films of the 21st century. It is absolutely incredible. The story is gripping, and complex. The locales are exotic and the sets are fantastic, like a globetrotting time machine back to the late 1970s. There is plenty of action but most the film consists of dialogue. And what dialogue! It is a feast of a smorgasbord of foreign languages.

I can't recommend it enough.

joel wingReviewed in the United States on November 4, 2020
4.0 out of 5 stars
Exploration of the terrorist Carlos and the world of revolutionaries & govts he worked within
Verified purchase
Carlos is about the famed Leftist Venezuelan terrorist Carlos the Jackal played by Edgar Ramirez. He decided to fight for radical Palestinian groups and became one of the most infamous men in the world. The story documents his rise and fall and more importantly what led to a period of international terrorism in the 1970s and why it ended.

The movie comes in different parts.

The first lays out that Carlos is committed to Third World liberation struggles against the West. He goes to work for the Popular Front for the Liberation of Palestine (PFLP) which was a radical group opposed to Yasser Arafat that believed attacks around the world was the way to push the Palestinian issue. Carlos is eager to move up but has to prove himself in Europe. This shows Carlos’ motivation and his drive. It also explains the environment in the world at that time when there were committed Leftists around the world pushing all kinds of causes from the War in Vietnam to the fight against Latin American dictatorships to a war against capitalism. There were all kinds of groups to join from peaceful to violent at that time as well. Carlos and others chose armed revolution.

The next part is about the cost of celebrity. Carlos carries out a dramatic attack and becomes famous. In the process he becomes a gun for hire going from one Arab country to another looking for backing. The last part is the impact of the end of the Cold War when Carlos losses all his powerful friends. This shows how the Leftist groups were only able to grow and carry out attacks with the backing of foreign governments. During the Cold War the Soviet Union was also pushing Third World revolutionaries. When that competition with the West ended so did the support and Carlos and others suffered the consequences.

What interesting is that Carlos’ body is symbolic of his situation. When he’s thin and in shape that means he’s doing well. When he’s fat he’s struggling.

Overall this is a great exploration of Carlos and the world of revolutionaries and governments he operated within.
4 people found this helpful

Phil RReviewed in the United States on May 26, 2021
1.0 out of 5 stars
Garbage
Verified purchase
I suppose if you were born and raised in Europe you might like the movie. I am used to American film production quality and acting. Not to say some exceptional cinema originates in Europe, but this is definite not one of those. The star mincing nude in front of a mirror and window is hilarious and pretty much defines the entire movie. If you don’t mind wasting your money this is actually an unintended comedy, but otherwise don’t waste your money. I don’t know how it received so many stars from other viewers.
One person found this helpful

Gary OvermanReviewed in the United States on May 21, 2021
1.0 out of 5 stars
Very Disappointed
Verified purchase
This mini-series was an overall disappointment to me in large part due to their not showing English subtitles when the characters spoke English. If languages other than English were spoken the dialogue was subtitled, but not for English.

I bought this film largely due to the presence of English subtitles as I have a serious hearing impairment, so their absence made the film extremely hard for me to follow.

From what I could hear, the story itself was mostly true, and it showed what went on in the minds of terrorists of that era.

But, if you speak and understand English and have a serious hearing problem, be warned that this film will likely be hard to understand.

HoiPolloiReviewed in the United States on July 8, 2021
2.0 out of 5 stars
What a Mess
Verified purchase
Impressively filmed with great locations. But the script is a train-wreck. There is no story arc and no resolution to anything -- Carlos is a cool-looking bad ass dude who almost immediately reveals himself to be incoherent, and he just devolves from there. From that point, the movie continues for a couple more hours.

PepinoReviewed in the United States on October 27, 2021
5.0 out of 5 stars
Classic drama of a complex terrorist
Verified purchase
From the first viewing of this action packed drama I knew that I would want my own copy of this well acted dramatization of a real character.
One person found this helpful

MelinReviewed in the United States on September 3, 2019
5.0 out of 5 stars
Fantastic movie about Carlos...however.
Verified purchase
To fully appreciate the film, the complete version must be viewed. The condensed version is too choppy and omits some of the most important scenes in the movie.
3 people found this helpful

FrankReviewed in the United States on August 8, 2016
5.0 out of 5 stars
I love this movie
Verified purchase
This is very subjective, but I loved this movie from the first time I saw it. The acting is superb, the story captivating, the photography very nice and somewhat yellow and the epic length of this production enjoyable. I am a fan of the director's other movies (Olivier Assayas), also. This package came with a bunch of extras. Note: As stated in the movie, this is loosely based on The Jackal, but it not intended to be a documentary and plenty of creative license was used.
4 people found this helpful
See all reviews
Back to top
Get to Know Us
Make Money with Us
Amazon Payment Products
Let Us Help You
EnglishChoose a language for shopping. United StatesChoose a country/region for shopping.
© 1996-2022, Amazon.com, Inc. or its affiliates