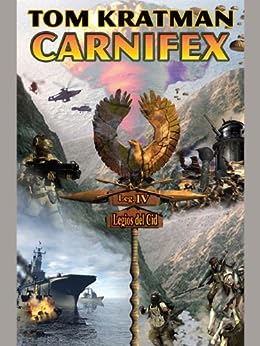 by Tom Kratman (Author) Format: Kindle Edition
Book 2 of 8: Carrera Series
See all formats and editions
Sorry, there was a problem loading this page. Try again.
BE CAREFUL WHO YOU CHOOSE AS YOUR ENEMY,
HE'S GOING TO BECOME JUST LIKE YOU

Patricio Carrera has been waging what amounts to a private world war to bring to justice the murderers of his family; He's raised an army and air force and used them. He's raised a fleet and he's about to use that. He's suborned one republic and is about to undermine another. He's tracked his enemies across half a world, breaking, in the process, any notion of international law that stood in his way.

Now he's deployed his legions to Pashtia, penultimate hideout of the Salafi Ikhwan who have made him what he has become. But with each step further from his home, revenge seems no closer. And with each step he leaves behind him a little of his dwindling humanity.

Revenge is a dish best served cold. Yet the trail itself grows cold, as cold as the snow-capped, windswept mountains of Pashtia. Only Carrera's hate still burns hot, and that's a fire that is slowly consuming him.

Tom Kratman is author of A State of Disobedience (Baen). In 1974, at age seventeen, he became a political refugee and defector from the PRM (People's Republic of Massachusetts) by virtue of joining the Regular Army. He attended Boston College after his first hitch, then rejoined the Army until after the Gulf War, when he decided to become a lawyer. Every now and again, when the frustrations of legal life and having to deal with other lawyers got to be too much, Tom would rejoin the Army (or a somewhat similar group, say) for fun and frolic in other climes. His family, muttering darkly, still puts up with this. Tom is currently an attorney practicing in southwest Virginia.
Read more
Previous page
Next page
Next 3 for you in this series See full series
Total Price: $20.97
Next 5 for you in this series See full series
Total Price: $34.95
Books In This Series (8 Books)
Complete Series
Carrera Series
Kindle Edition
Page 1 of 1Start OverPage 1 of 1
Previous page
Next page

Kratman (A Desert Called Peace) raises some disquieting questions about what it might take to win the war on terror in this military SF novel set in a future world with obvious parallels to our own. When Salafi fanatics launch a 9/11-style attack on the hated Federated States of Columbia, they end up killing the family of Col. Patricio Carrera. Carrera vows to destroy Salafism by any means necessary and raises an army in his wife's native land to provide that means. He takes the fight to Pashtia, where the planners of his family's doom are cowering. This disturbing but insightful narrative takes Nietzsche's aphorism about staring into the abyss and runs with it to its grim conclusion. As always, Kratman delights in offending left-wing sensibilities, but this will only enhance its appeal to his target audience, who will enjoy it for its realistic action sequences, strong characterizations and thoughts on the philosophy of war. (Nov.) --This text refers to the hardcover edition.

Tom Kratzman was born in Boston and enlist at 17 years old in the US Army. He served with the 101st Airborne division and in Panama with the 193rd Infantry Brigade. He then went on to Boson College on an Army scholarship. Following his graduation, Kratzman was commissioned as an officer in 1980 whereupon he spent three more years in Panama followed by a four-year stint with the 24th Infantry Division. He was then part of the United States Army Recruiting Command, before serving with the 5th Special Forces Group during the Gulf War.

Kratzman left the regular army in 1992, and went to law school. He earned his juris doctorate in 1995, but remained a member of the United States Army Reserve and also worked for MPRI. He was recalled to the Army in 2003 for the Iraq War but was found to have a heart problem. He then spent time at the U.S. Army War College as Director, Rule of Law, for the Peacekeeping and Stability Operations Institute. Kratzman retired in 2006 as a Lieutenant Colonel and became a full-time author.

Andy McKinney
VINE VOICE
4.0 out of 5 stars He works in 'Moral Philosophy' and that is grand.
Reviewed in the United States on December 4, 2020
Verified Purchase
As an adventure book, this is a worthy successor to the first in the series. I appreciate how he paints contemporary day issues right here on Earth as problems to be dealt with hundreds of years in the future on another world.
People with a bent for rigorous presentation of views might want to save the Authors Afterword for their permanent library. Kratman is trained as a lawyer and makes his points with the logically precise inevitably of an avalanche.
I have read him prior to now in his collaborations with John Ringo (the Live Free or Die series of Ringo is a favorite of mine.) Now I have discovered an author of power and imagination (and humor-he names an airplane a NA-23 for example). I will take the time to seek out his other works, particularly in this series.
An author who quotes Col. Ralph Peters, Churchill, The Bible, and Heinline has an intellectual reach that I find admirable.
Recommended as an adventure story and even more so as an examination of important aspects of our current society.
Read more
Helpful
Report abuse

Robert A. Hall
5.0 out of 5 stars Another great Kratman novel
Reviewed in the United States on July 29, 2012
Verified Purchase
As readers of my Old Jarhead Blog know, my personal reading is focused on history, politics and economics, professional on management and healthcare. But sometimes I need a break, and nothing is better for that than one of Tom Kratman's military science fiction novels. Of course, Kratman is not entirely a "break" from reading about politics or the military, but he is enthralling. "Carnifex" is a sequel to "A Desert Called Peace," and like all good sequels, it can stand on its own. But if you haven't read "Desert," you'll be doing yourself a favor if you read it first. Kratman is a retired Army LtCol, and one would expect his mastery of the feel of close infantry combat to be good. But in this book, he shows equal understanding of war at sea and in the air. His detailed plotting and fully believable characters will hold you through this long novel, full of the twists and turns of a global conflict on several fronts. It is the Earth and all our problems, including the "War on Terror," set on a distant planet, centuries in the future. But the "War on Terror" (or perhaps better the "War against Salafist Jihadism") on Nova Terra is being fought by some men who are as ruthless as hard as the terrorists in defense of family and freedom, despite the hand-wringing of the usual collection of progressives. This is the third Kratman novel I've read. The first was "Caliphate," which I also recommend, about the war here after a terror nuke strike on the US. I have others waiting for when the non-fiction pile shows a little light--or the brain needs a change of pace. One is surprised that he can turn out novels so rapidly, at such a high quality of writing. After reading his books, rich with his philosophy of leadership, this old Marine would have been proud to sever under Kratman's command. Whether I would have measured up to his standards is another question, beyond knowing at this stage of my life. Lastly, the Author's Afterword in "Carnifex" is a bonus, and worth alone what you will pay for the book. Send it to your Congresscritter.

Robert A. Hall
Author: The Coming Collapse of the American Republic
(All royalties go to a charity to help wounded veterans)
Read more
4 people found this helpful
Helpful
Report abuse

Pastored27
4.0 out of 5 stars Blood, guts, guns and sex - it must be Tom Kratman again!
Reviewed in the United States on March 11, 2015
Verified Purchase
As other reviewers have mentioned, this is the second in a series chronicling the "Legio del Cid" from its foundation by its father and guiding spirit, Patrick Hennessey/Patricio Carrera. The first volume, "A Desert Called Peace" gives the full background to the Legion's roots as a means of personal revenge upon those who killed Carrera's wife and children in an incident similar to the 9/11 terror attacks. In this second volume the theater of action shifts to Pashtia, which bears a striking similarity to Afghanistan of our day.
There is, as in all the Baen military s.f. genre, a surfeit of blood and bodies - which is to be expected; after all, this is a war. This book pays more attention to character development, and we are introduced to a number of persons who will surely appear again in future books. There is a significant amount of sexual content, with Kratman emphasizing fellatio as both an expression of love between two partners, and as an expression of dominance between parties. This coupled with the gore makes this book less than ideal for readers under 16, in my view. Like all good writing, the author has a clear worldview, and you are free to accept or reject it at your leisure. The setting up and knocking down of straw men like the media, the Kosmos, and progressive politics in general can get a little tiresome, especially when Kratman uses Carrera as a mouthpiece for his beliefs, but there is less of it in this book than there was in "ADCP". It is also heartening to see Carrera beginning to pay a personal price for his vengeance by book's end; clearly he is learning that revenge affects both parties permanently.
I am looking forward to the development of the Legion from a band of mercenaries to a nation-state in their own right - and I wonder how long it will take before the "Earthpigs" get what's clearly coming for them.
Read more
2 people found this helpful
Helpful
Report abuse
See all reviews