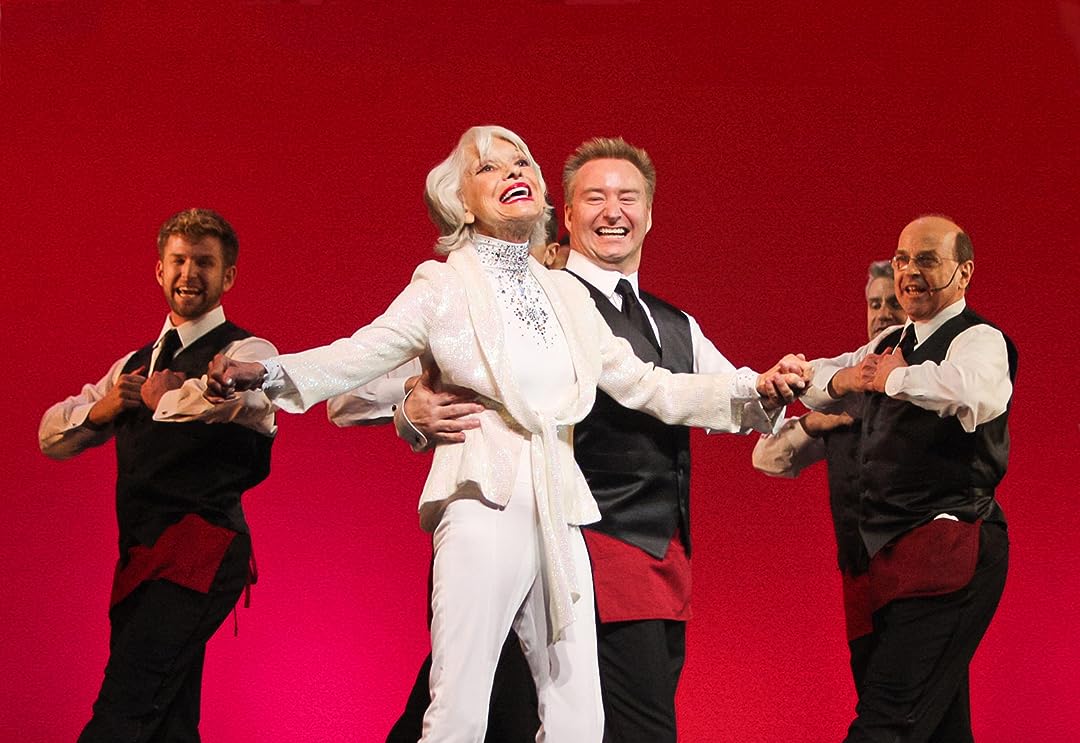 (116)7.51 h 28 min2011PG-13
If Carol Channing didn't exist, no one could have made her up. One in a billion, Carol , at 89, remains an unstoppable, megawatt dynamo. Broadway diva extraordinaire is just the icing. Carol Channing hovered at the pinnacle of the entertainment world from the late-1950's through the 1960's and beyond, living life sensationally large.

Studio
Entertainment One, AMC Plus Documentaries

SylviastelReviewed in the United States on October 24, 2017
5.0 out of 5 stars
Hello, Carol! You're Still Going Strong in Your Nineties!
Verified purchase
Carol Channing is an American treasure best known for her longtime role as Dolly Gallagher Levi in the classic Jerry Herman musical, "Hello, Dolly!." She has won Tony Awards, induction to the Theatre Hall of Fame and an Academy Award nomination. With her big grin and unmistakeable voice, Carol is easy to love especially here. This documentary is a tribute to a Broadway legend and icon. She has a low voice but she belts out songs like "Before the Parade Passes By;" "Hello, Dolly!," or "Diamonds are a Girl's Best Friend."

Carol Channing is in her nineties. She has remarried her childhood sweetheart and recounts the story of their earlier relationship. Carol was unhappily married for 42 years previously. She visits Broadway in New York City and hangs out with the cast members of "Memphis the Musical" on their break. If you love Carol Channing or Broadway musicals, you will definitely enjoy this wonderful tribute to her life and career. You will hear stories from Jerry Herman, Barbara Walters, Mary Jo Catlett, Tommy Tune, Tyne Daly, Chita Rivera, Debbie Reynolds, Joann Worley, Marge Champion and more.

There are plenty of extra clips about 45 minutes about Carol Channing and stories about her. She recalls her friendship with Danny Kaye. She rarely has a negative comment about anyone including her first husband. She was also awarded a Star on the Palm Springs Walk of Fame.

cats1usaReviewed in the United States on December 18, 2012
5.0 out of 5 stars
Well, Well Hello CAROL! From beginning to end.
Verified purchase
Well, whether you're a fan or not, you have to admit, Carol has had decades of success and full houses. Some of the after show comments never change, but even in her 90's she is still growing, she's still glowing and she's still going strong. From Lorelei, to Dolly, good golly, she keeps packing them in and bri9nging them to their feet. She has given us the perfect funeral song, RE: The Johnstown Flood, in, "This is a Darn Fine Funeral", she has given us guts, in "Switchblade Bess", and she's taught us how to dance with both, "The Yahoo Step" & "Dancing" She's put on more miles than most Secretaries of State, she's performed for Kings and Queens, with dozens of well know leading men. She even lent her talents and voice to President Lyndon B. Johnson's 1964 reelection, with, "HELLO, LYNDON". She's sold Kitty Litter, Diamonds, Gimbels, furs, and dozens of other items. She has never flinched when tossing dozens of Diamond rings to eager fans, though, usually fake, she did throw one out the a fan at a GIMBELS special event, in 1972, while doing a GIMBELS promo, while here to perform in 4 shows at the Wisconsin State Fair. On her very first show at the Wisconsin State fair Park, it poured with lightening and thunder. No matter, trouper that she is, she moved the show to a huge tent. Devoid of Electric power after lightening struck a transformer, on she went, she needed no POWER, she provided her own. The review the next day read, "Incandescent CAROL, using her own Dynamo goes on despite power outage and blows the roof off the tent with her voice and showmanship" And it's all here including many hard to find clips of that dazzling "HELLO,DOLLY!" title number, and in full color. It's so nice to see that performance somewhat preserved, though in just parts, it and CAROL are NATIONAL TREASURES! Thanks for all the years of entertainment!
3 people found this helpful

JIM loves old TV SHOWSReviewed in the United States on February 19, 2013
5.0 out of 5 stars
You might be surprised after watching this how much you really do like Carol Channing!
Verified purchase
Ok, I admit it I never was a big fan of Carol Channing. I found her annoying at best. Well, after watching this documentary I have changed my opinion. Carol is whitty, charming, and definitely Larger than Life as said in the title. I didn't know what the documentary would be about but was pleasantly surprised by how down to earth Carol is. I also enjoyed hearing her story of reconnecting with her grammar school sweetheart she hadn't seen in 70 years! THey end up getting married and live happily every after.( until he passed away last year). Carol was married to her previous husband for over 40 years and said he was mean to her. So good for her, she got to enjoy this final chapter of her life with the man she loved and got away from the other mean guy. She is very unusual and eccentric which I found endearing. Nobody that knows her says anything negative about her. She's a great lady. Now would I buy her cd's and listen to her sing....heck no. But this documentary takes you behind the scenes of Carol's nomadic life on the road doing shows like Hello Dolly. It also does some great interviews with stars like JoAnne Worley, Debbie Reynolds, Tippi Hedrin, Loni Anderson, and Chita Rivera, just to name a few. Great seeing so many old familiar faces and hear their stories about Carol. So if you want to have a good laugh and see an eccentric legend of the stage definitely catch this outstanding documentary. Jim :)
5 people found this helpful

Neil MotchanReviewed in the United States on April 20, 2013
5.0 out of 5 stars
A TREASURE BETOND WORDS
Verified purchase
This tribute to the the virtual Queen Of Broadway served two great purposes. The first, and the principal one, was to show our
love for this ancient relic of entertainment, and to say a warm "Thank You" for making our lives happier for no reason but you.
The secobd purpose was to let us have a a visual reminder of what this gracious lady has done to entertain us over the years and
how she got there in the first place. Enough to say that this disc is a collector's for those who treasure the work of this comedienne
and for the rest of us, a constant reminder we can bring out when we want a bi of a laugh again.
It's a cheap souvenir for letting you recall happier days.
2 people found this helpful

Larry WestlakeReviewed in the United States on July 14, 2012
5.0 out of 5 stars
Hello Carol!
Verified purchase
What an amazing documentary of an amazing actress! This film follows Carol around as she gets ready to go onstage again after 16 years for an AIDS benefit. Her Dollly 'Boys' are there to help her along and so is a long lost love - just try not tearing up when he talks about how he wanted to come up to her when he saw her outside a theatre and didn't - Carols "Oh you should have!" tugs at the heart strings.

Still going strong at her age is also a gret example for all of us! As the song saysw "Look at the old girl now fellas" and we must!
7 people found this helpful

Ron BrowneReviewed in the United States on September 10, 2016
4.0 out of 5 stars
It wasn't my first choice, but was still worthwhile.
Verified purchase
I took this video because I couldn't find a video of Hello Dolly that stared Ms Channing, so I bought this, and then bought Hello Dolly starring Barbara Streisand. The Carol Channing video showed me things I had never known about her, and made the video worthwhile for me

Charles WildReviewed in the United States on May 23, 2012
5.0 out of 5 stars
Inspiring, Moving, Interesting, and just plain FUN
Verified purchase
Wow - this is such a great documentary about a GREAT lady. I am so happy I found this movie. It is a MUST for anyone who loves theater/movies. It is about 90 minutes and moves so well covering all of Carol's life and love(s). So many great interviews and cameos from many celebrities, some of whom have only recently passed away. Overall it is inspiring, funny, moving, and just plain fun to watch. I hope it is considered for (at least) an Oscar nomination next year.
12 people found this helpful

L. H. SteverReviewed in the United States on June 21, 2012
5.0 out of 5 stars
What's not to LOVE!
Verified purchase
I have been a fan of Carol Channings since I was a teen and my Mom and I saw her in the 1970's production of HELLO DOLLY on broadway. She had broken her arm the night before, but as they say " the show must go on". She and the show were FAB; at the end of the performance she came back out and sat on the edge of the stage and told us all of the misadventure that left her with the broken arm. I bet everyone in that theatre felt as I did...that she was talking directly to me! ...and She was my friend!
That is a rare gift indeed..as is this documentary. If you are a fan of Miss
Channing or of the broadway theater...BUY THIS CD
5 people found this helpful
See all reviews
Back to top
Get to Know Us
Make Money with Us
Amazon Payment Products
Let Us Help You
EnglishChoose a language for shopping. United StatesChoose a country/region for shopping.
© 1996-2021, Amazon.com, Inc. or its affiliates