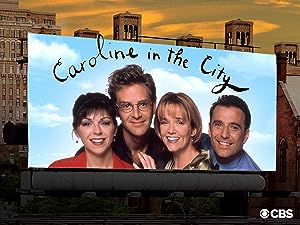 Caroline in the City

Benito VasquezReviewed in the United States on November 1, 2008
4.0 out of 5 stars
The last era I watched TV regularly, because of shows like "Caroline"
Verified purchase
I followed the "Must See TV" Thursday night line-up as long as it kept throwing out worthwhile, inspired, clever and funny programming. And this show was part of the last generation of those kind of shows, particularly comedies in my case. For some reason, few guys admit to liking this show. Is it "Seinfeld?" Of course not. But that was the kind of show more guys related to more than a show like "Caroline In The City," which was one of my favorite comedies of all the "Must See" lineup. In addition to the leads- Thompson (Caroline), Lutes (Del), Getz (Richard), and Pietz (Annie), Andrew Lauer, who played Charlie, Del's assistant/messenger had me in stitches on many occasions. I've always adored Lea Thompson, so sampling her show was a given. But there was definitely something about it from the beginning that separated it from other flash in the pan sitcoms. Once you took this show on its own, and not by comparing it to others it grew on you very fast. The story lines were as relatable as they come, but with a different sense of humor than its contemporaries, albeit with some usual formulas. But the ensemble pulls it off. And as the show and characters developed, so did the appeal. The show was not only funny, but had a real heart. Even the extras on the series had their shining moments and contributions to this show- restauranteur Remo was always ready to pounce on any cue for a home run chuckle. Sadly, in its latest stage it started to pander to the focus group mentality who felt adding additional, yet pointless cast members would reach a wider demographic (Suddenly Susan suffered through the same desperation as it aged too), and the exact opposite occurred. It wound up pleasing nobody, or at least displeased its most loyal followers. What a pitiful finish to a show with so much potential, and a great fistful of episodes to embrace in its early years. When I bought the DVD set, I went through them in no time. They just flew by. Very entertaining series with the edge it needed to separate it from the others. I can't wait for follow up season releases.
14 people found this helpful

JRReviewed in the United States on September 13, 2021
5.0 out of 5 stars
Funny stuff with Lea Thompson at her best
Verified purchase
Lea Thompson lead a perfectly cast team. Funny and interesting characters that I grew to love. Nice to go back to a simpler time
One person found this helpful

SmartieReviewed in the United States on June 10, 2018
5.0 out of 5 stars
only one season for Caroline
Verified purchase
We did enjoy season one of Caroline and think it's strange that we cannot get others in Region-1 playback. I thought I finally did and didn't notice it was Region-2. I would like that information easier to notice.
2 people found this helpful

Green-manReviewed in the United States on January 27, 2009
4.0 out of 5 stars
Entertainment and Societal Studies
Verified purchase
Preliminaries: I had seen this show as kid in the '90s, and after it was taken off the air I had forgotten about it (in fact, I don't remember much beyond the first season). However, I really liked the show, and when I found it I was pleasantly surprised. I do not wish to go into too much detail regarding what the show is about because that's already provided in the product description. Basically, Caroline (Lea Thompson) lives in New York City working as a cartoonist. She has an assistant, Richard (Malcolm Gets), who comes to her apartment to work. And we cannot forget that Caroline has an on-again-off-again relationship with her boss Del (Eric Lutes). Add these particulars to antics and life episodes that come up in Caroline's (or sometimes the other characters') life and you have a show...primarily comedy, with some low-key drama added into the mix (it was the '90s after all).

Who this show is for: Fans, obviously, and anyone nostalgic about the any aspect of the '90's. This is also a good concentration in a media and sociology doctoral dissertation. I was surprised to find (because I didn't notice at the time) the semi-stereotypical roles of men and women in this show. The men (Richard and Del) are the funny ones most of the time; they get to tell most of the jokes, and they're the ones smart enough to think of quick quips, create hilarious banter, and make up great come backs. While Caroline and her neighbor Annie (Amy Pietz) do get to say something really funny every once in a while, especially near the end of the season, they are often presented as less intelligent in the humor department (that's why they can't make jokes as easily as the men), and stand in the shadow of the men in this respect.

However, the men are presented either as somewhat self-centered or caveman dumb...or sometimes both. Richard is the stereotypical artist who agonizes about his art (which is horrible), while remaining really bitter and cynical about life in general; he's the kind of artist we were all taught artists (painters and sculptures only) are. Del is the bumbling idiot who looks like a moron who couldn't even pass highschool when his character is compared to Caroline. All the women are portrayed as being far more sophisticated and intelligent to how the world works (and intelligent in general) than the men. When there is a man who is presented as intelligent in the show, he is usually a guest (so he's gone in the next episode), is presented as the perfect form of what a man should be, and is usually gay or is the butt of gay-jokes by the other male characters. There, I've just provided someone out there a thesis for their Ph.D.; don't thank me here, just put my name in the acknowledgements section of your dissertation.

Who this show is not for: Anyone who primarily hated the '90s (or at least hated the the '90s more than loved them), doesn't like television shows and movies older than five to seven years, or, obviously, can't stand any of these actors. As I said above, the characters are stereotypical of the '90s; the show does not try transcend the stereotypes present in society at the time, they simply try to mirror society. This sometimes presents annoying characters to watch, especially when you are glad we are not regulated by that kind of society as much anymore, but still recognize that much more needs to change about our societal social structures. But I'm actually not a sociologist or sociology student, so what do I know? I'm not even that interested. Moving on.

A. FerreReviewed in the United States on August 19, 2008
4.0 out of 5 stars
Worth buying for the entertainment value.
Verified purchase
This is a great series, however, as in the UK release, not all the episodes are in the correct order. Compared to the list given by the other reviewer, there is one episode out of order (Caroline and the Condom is at the end of the last disk.) However, in watching the episodes in the revised order there was still a bit of discontinuity in the story line. Also, the casing seems to be very fragile and easily broken during shipment. But the picture and sound is just fine and it is definitely worth buying for the entertainment value.
12 people found this helpful

AdamReviewed in the United States on October 15, 2012
5.0 out of 5 stars
Must See TV on DVD
Verified purchase
If you are looking for something that is quality television watching. Buy the 1st season of this DVD and you'll laugh with enjoyment. It's smart, clever and so well written in characters. This is one of the Must See TV series that never gets talked about much. I hope, I just hope that season three and four come out on dvd as well. Because from what looks like there hasn't been news on it, it looks like we'll have to treasure both season one and two until then.
One person found this helpful

ChariseReviewed in the United States on February 12, 2012
5.0 out of 5 stars
Love this tv show
Verified purchase
I was very pleased to find amazon had this tv show on cd. I received it quickly and in great condition. It is very funny and I have missed having it on tv. Now I can watch it whenever I want. Well worth the price.

T. KaplanReviewed in the United States on September 18, 2008
3.0 out of 5 stars
Worth it for Malcolm Gets
Verified purchase
This is a show that had some incredible character actors and spent most of season 1 trying to figure out how to put them to good use. Despite Lea Thompsons' charm and energy onscreen, she is the weak link in the lineup of Eric Lutes, Andy Lauer, Amy Pietz and especially Malcolm Gets. Despite some slipshod development and mostly boring plotlines, the cast makes the most out of their one-liners and natural chemistry, and while it's not a brilliant show, it is enjoyably watchable. I saw it with my two siblings, both young adults, and while neither one of them had ever seen the show before, they had plenty of laughs and wanted me to put in Season 2 right after we finished, which is the best recommendation anyone can give.

My one problem: I live in NY. What kind of money is she making that she can afford a loft like that? I know they shot this in the 90's and everything was cheaper and cheerier back then, but for you NYC city-dwellers, check her place out and get back to me. Where do you find an NYC apt like that except in a TV studio?
One person found this helpful
See all reviews
Back to top
Get to Know Us
Make Money with Us
Amazon Payment Products
Let Us Help You
EnglishChoose a language for shopping. United StatesChoose a country/region for shopping.
© 1996-2022, Amazon.com, Inc. or its affiliates