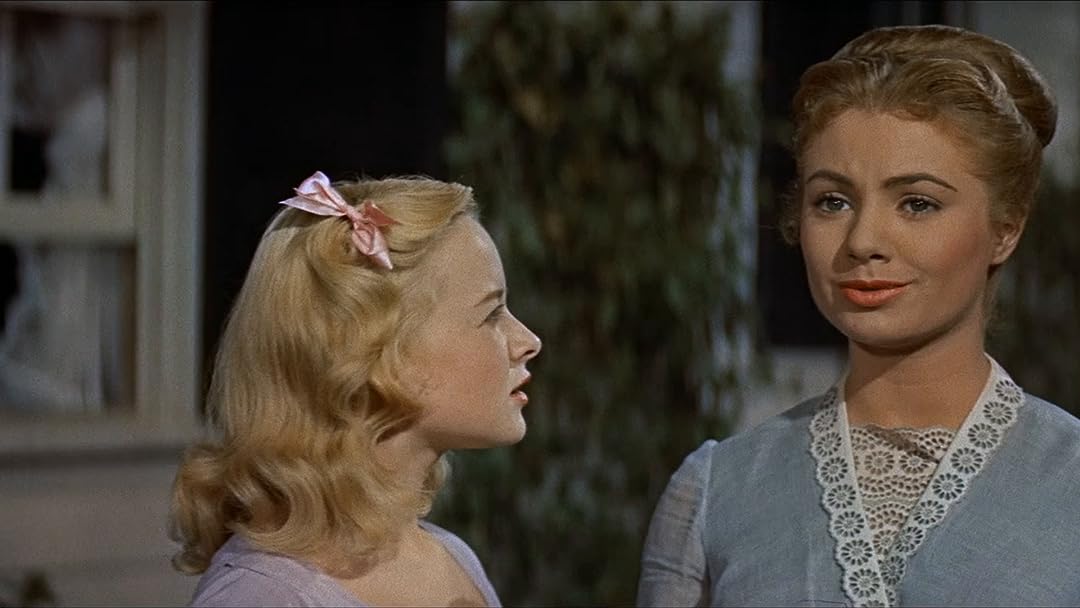 (1,523)
6.62 h 8 min1956ALL
Filmed on location in a beautiful seaside village, Carousel stars Gordon MacRae as Billy Bigelow, a smooth-talking carny man who falls in love with a millworker (Shirley Jones). Tragedy strikes these star-crossed lovers, though, and their journey is not easy. How Billy makes his way to Heaven and back again, providing love and solace to his wife and daughter, and redemption for himself, is the story of one of the most unique and powerfully uplifting musicals ever written. With a score that includes "If I Loved You" and "You'll Never Walk Alone," little wonder that Carousel was composer Richard Rodgers' personal favorite.

Kindle CustomerReviewed in the United States on December 27, 2017
2.0 out of 5 stars
Not the original version-edited to be" non offensive"
Verified purchase
I have adored this musical since I was a child. The two stars is for the editing and censorship. Please note that this version is missing some of the most emotional scenes. They cut the scene where Billy hits Carrie, followed by her singing He's Your Fellow and You Love Him afterward. Such editing of classics to remove currently offensive material sanitizes them in a way that they no longer resonate as they used to. At least let us know when you edit for political correctness. Just have a new symbol, maybe a washing machine emoji?
56 people found this helpful

Happy customerReviewed in the United States on July 5, 2021
5.0 out of 5 stars
A breathtaking rendition of Rodgers & Hammerstein's "Carousel"
Verified purchase
From the downbeat, "Carousel" was spellbinding and more beautiful than I could have anticipated. The orchestral accompaniment was luscious. Julie (Shirley Jones) expressed her undying adoration for Billy Bigelow (Gordon MacRae) in her melodious soprano voice, and Gordon MacRae reciprocated in his matchless baritone musicality. The two worked very well together in a performance that was part fantasy, part morality tale, and part old-fashioned man-woman love story. The supporting cast was peerless and as musically exquisite as the two principal stars.

If you like dancing, expect to be overwhelmed and deliriously charmed by the choreography and execution by some of the most gifted, athletically proficient dancers ever. Topping the ensemble toward the movie's end in a fantasy ballet is Jacques D'Amboise, (deceased 2021), retired lead of the New York City Ballet, exhibiting skills that approach those of Nureyev and Baryshnikov, with some impressive "hang-time" reminiscent of Michael Jordan when he was a Chicago Bulls superstar.

The story line in Carousel has been criticized for its focus on domestic battery and its seeming acceptability when Julie defends Billy's use of physical punishment when she annoyed him. It must be remembered that the culture has changed dramatically in the many years since the story line for "Carousel" was adapted by Richard Rodgers and Oscar Hammerstein. This is not to excuse the total unacceptability of hitting and beating anyone; it simply reflects the old being superseded by the new. It should not spoil anyone's enjoyment of the wonderful music, lyrics, dancing, and camera work and photography that is heart-stopping.

I would like to commend and compliment the distributor, 5-Star Media, for its service and reliability in delivering a high-quality set of gently used DVD's that function as if they were out-of-the-box brand new, and most important, will function in the United States. And, as always, my thanks to Amazon's customer service staff for facilitating the exchange of unworkable discs that were manufactured for use only in European applications. This was a total win-win experience for me.

Desert BrkrReviewed in the United States on June 22, 2022
1.0 out of 5 stars
Misleading Region Designation
Verified purchase
Have not used it. Reverse side, lower left, rectangular block has a prominent triangle, green plaid background with a large, white U centered. Customers like me probably assume that means, when regional designations determine whether or not a dvd can be played in the buyer's area, that the comment "UNIVERSAL Suitable for all" means this dvd wll play in any region. When loaded into my player, a sign instantly flashed upon the screen and stated this dvd cannot be played in my area.
That's twice!
Knowing how critiical is this information, Amazon should prominently display regional designations with every dvd description. Customers need the information to make informed decisions before ordering.
I'm going to not return this dvd, although it's arrival has become an instant irritation. I'm going to keep it.
Coincidentally, I bought an expensive laptop twenty years ago which I have never utilized in the purpose for which it was purchased. So happens, since it is portable and not wired to the internet, I figured it might operate indepently of the confining system governing playback ability of a device. Turns out to be true. The laptop has the capability of being redirected towards other regions. I checked it out, switched to the European, Japanese, some other place region, turned it on and it plays. The screen is so small, I will watch with one eye covered. Other than that, Mrs. Lincoln....
One person found this helpful

JS in AZReviewed in the United States on May 9, 2016
5.0 out of 5 stars
Great remastering of one of Rodgers & Hammerstein's greatest musicals.
Verified purchase
Very nice remastering of this 1956 Rodgers & Hammerstein classic musical. I hope for a Blu Ray version in the near future, but meanwhile this is a very nice DVD transfer. The music is in my opinion the best ever written by R&H, with "The Carousel Waltz" and songs like "If I Loved You," "Soliloquy," "A Real Nice Clambake," "Mr. Snow," "When the Children Are Asleep," and, of course, "You'll Never Walk Alone." It is a great story, but don't expect laughs. This is a drama of operatic quality and breadth. The story won't appeal to everyone. I watch it rarely, but mostly for the exquisite songs, and thus usually listen to the CD of the music. I could listen to it over and over again.
14 people found this helpful

Elvin OrtizReviewed in the United States on December 26, 2016
4.0 out of 5 stars
Another Great Musical
Verified purchase
I confess that I didn't like the opening sequences of this film as much as I did in other Rodgers and Hammerstein's musicals. The beginning of Carousal is kind of awkward because it uses background music to show the moment in which the major characters, Billy Bigelow and Julie Jordan, fall in love with each other at first sight at the carousel. It is a very slow beginning when compared to the other R&H films. Yet, once it starts, it is quite a beautiful musical. Not only the songs are beautiful, but also the ballets that appear, June is Bustin' All Over Ballet and Louise's Ballet, and the songs that are sung with a chorus, Blow High, Blow Low; A Real Nice Clambake; Stonecutters Cut It on Stone; What's the Use of Wond'rin'; You'll Never Walk Alone. The ballets and the choruses are things that I personally enjoy very much in a film. The film's restoration is also a great job and helps appreciate the film's quality.

There is also a second disc with special features and an earlier French film based on the same story, titled Lilliom. Although one has to watch this film with French subtitles, it is quite interesting to watch. So, I think this is a great buy for musicals lovers.
5 people found this helpful

Old-TimerReviewed in the United States on February 2, 2022
5.0 out of 5 stars
This 50th Anniversary Edition includes two discs.
Verified purchase
The special features are priceless and include Fritz Lang's masterpiece titled Liliom. The commentary by Shirley Jones and Nick Redmon, regarding all the actors and Rodgers and Hammerstein should remind
us of what a great gift the play and movie is. I am pretty sure that this remastered DVD of Carousel is in Cinemascope 55. I was a 17-year-old usher at the theatre showing Carousel in 1956 and did not have the chance to watch the film, so this is the first time I watched the entire movie without interruption. I grew up listening to 78 rpm records with the Broadway songs from Carousel as well as Oklahoma. Thanks to all.

Leo BuckReviewed in the United States on December 8, 2019
5.0 out of 5 stars
Better than I remembered it
Verified purchase
This 50th Anniversary DVD re-release of a bona-fide Rodgers & Hammerstein classic is a pristine re-mastering with lots of awesome extras (like the original French film version of "Liliom"--the play that served as the source material for the musical.) Plus, just about every song in the score (including the "cut' numbers from the film--more incredible bonus material--) are all classic standards in the American "Song Book". Add to it, the eye-popping 11th hour "Ballet" between Susan Luckey and Jacques D'Amboise and there's no wonder this has remained so popular for five+ Decades now!
2 people found this helpful

3D-fanReviewed in the United States on May 5, 2008
5.0 out of 5 stars
Superb restoration--50th Anniversary Edition
Verified purchase
This review refers to the '50th Anniversary Edition' of the Rodgers & Hammerstein masterpiece "Carousel", filmed in 1956. Whatever problems that may have existed in previous releases of this great musical have been apparently resolved in this latest (2006) edition. Amazon.com mixes all of the reviews that pertain to different editions (of the same film), so it can be confusing. There are other reviews of "Carousel" from previous editions that are mixed in with the 50th Anniversary Edition reviews--and they complain about the DVD--look at the date of the review--they are referring to a previous release!

The digital restoration of the 50th Anniversary Edition is simply superb! The images literally jump off of the screen. Presented in widescreen, the picture has been enhanced for large screen TVs--so goodbye to that annoying little letterbox image. I watched this movie on a 46-inch Samsung LCD high definition TV, played on a Toshiba 1080p HD DVD player--and the picture and sound are simply stunning! If you had any doubts about purchasing a copy of this in the past--this issue is definitely worth it. Also, if you are interested in the other famous Rodgers & Hammerstein musicals ('Sound of Music', etc.)--they are sold as a 50th Anniversary boxed set--I have the others as well--and all have been expertly restored. Highly recommended!
14 people found this helpful
See all reviews
Back to top
Get to Know Us
Make Money with Us
Amazon Payment Products
Let Us Help You
EnglishChoose a language for shopping. United StatesChoose a country/region for shopping.
© 1996-2022, Amazon.com, Inc. or its affiliates