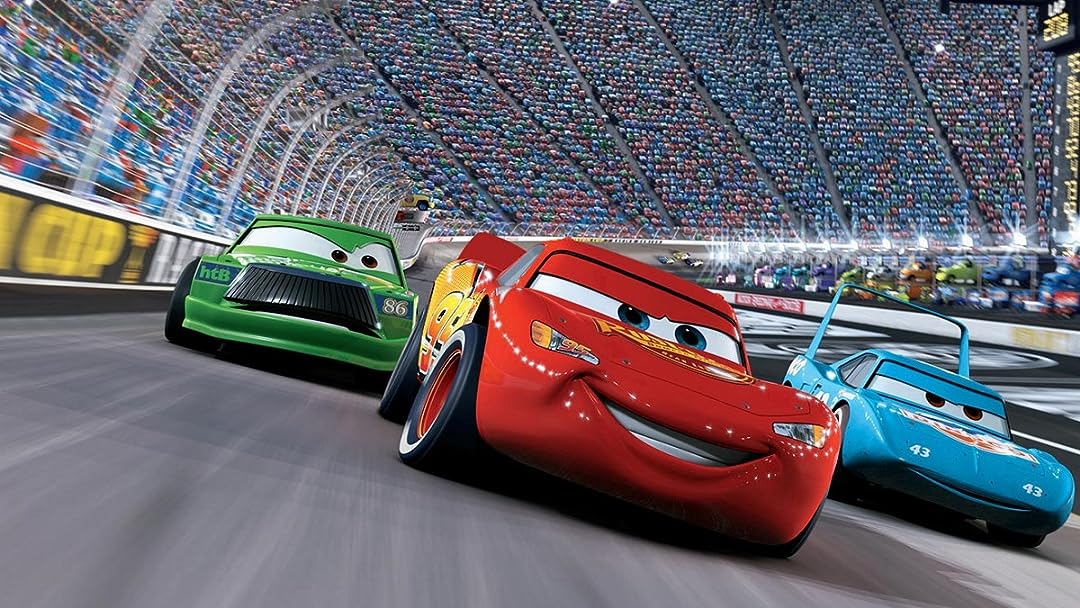 (15,766)
7.11 h 56 min2006X-RayG
Lightning McQueen is living in the fast lane - until he hits a detour and gets stranded in Radiator Springs; a forgotten town on Route 66. There he meets a heap of hilarious characters who help him discover there's more to life than fame.

Michael Patrick BoydReviewed in the United States on October 29, 2018
5.0 out of 5 stars
On Your Mark, Get set, Go
Verified purchase
Cars is one hour and fifty – six minutes long and was released in theaters on June 9, 2006. The story is about a Lightning McQueen who is a stock car racer with a big ego and does not take advice well. Three pit crews have quit already and after the race ends at the beginning of the movie his current team quits. McQueen is on his was to California to race in the Los Angeles International Speedway to decide the winner of the Pinston Cup. He forces Mack to drive through the night, so he can be the first one to California. McQueen fall out of Mack’s truck and winds up in Radiator Springs. While at Radiator Springs and doing community service McQueen learns something about himself and the meaning of friendship. Cars is a great family movie and gets an AAAAA+++++.

Amazon CustomerReviewed in the United States on January 26, 2019
1.0 out of 5 stars
This is not 3D Blu-ray !
Verified purchase
The video itself is fine. What I am not happy about is the misrepresentation that this was a 3D Blu-ray. That is what I thought I was buying. The picture of what was sent is not the same as what is posted on amazon. Had I known I would not have purchased this. I wanted the 3D version. Not right that it is portrayed that way.
23 people found this helpful

AliciaReviewed in the United States on June 12, 2017
5.0 out of 5 stars
Perfect movie for car-loving toddlers and adults!
Verified purchase
Such a cute movie! I haven't met a Pixar film I haven't loved. My kids love cars, and this movie was just right for them. No scary monsters or scenes a toddler can't watch. Just enough jokes to keep the adults entertained as well. Cars 2 is just as cute, and I can't wait for Cars 3 to come out.
15 people found this helpful

Ye Shall Be As GodsReviewed in the United States on December 13, 2016
5.0 out of 5 stars
Good themes in this film
Verified purchase
Pride is a topic that really needs to be the center of focus in a lot more children's films. As a pastor I am glad to see films like this that attempt to underscore how dangerous pride can be, and how rewarding it can be to see others as equally valuable as yourself. You don't have to put yourself on a pedestal to get the best performance out of yourself. All achievement is a collaboration.
16 people found this helpful

L. ShannonReviewed in the United States on January 25, 2020
2.0 out of 5 stars
Distracting Information Panel
Verified purchase
When my son watches this movie on my laptop, a panel with information about the performers pops up on the left side of the screen. It blocks about 25% of the screen and is very distracting and certainly not what I expected. I went to Settings but couldn't find a way to turn it off. So now I have purchased a video my son cannot watch.
4 people found this helpful

Amy KollaschReviewed in the United States on January 31, 2021
5.0 out of 5 stars
This is for US. Took a while to find this one.
Verified purchase
Product was exactly as advertised. I am in the US and it plays on our DVD player. A lot of the other ones were not for the US. Be sure to read the descriptions when purchasing DVD's. This was the only one I found that was for US. I bought this for my son for Christmas because he loves vehicles and remembered this one. He can be picky sometimes with vehicle movies.
One person found this helpful

AndrewReviewed in the United States on June 1, 2021
5.0 out of 5 stars
A very good movie for kids, adults and aliens.
Verified purchase
Very good movie, there are so many details that I have missed when I watched it as a kid.

I grew up to love cars and learned a lot about racing, modifying etc, so when I watched it again I started to notice so many, SO MANY little details about real cars that they put in this movie.

What a great movie from them, can't recommend it enough.

Don Vito CorleoneReviewed in the United States on May 19, 2011
5.0 out of 5 stars
Cars is worth the ride and even better in HD!!!
Verified purchase
When it premiered in 2006, Cars was met with some lukewarm response from critics. It was positive but not as positive as previous Pixar films have been met. Still, Cars is a really good movie with great animation, voice cast, characters and a good story. I've never been interested in the world of racing but when I saw Cars in theaters, I realize it was not only for racing fans. It has a wide appeal and I really enjoyed it. Lightning McQueen is a very well-rounded character and you can see his transformation from selfish moron to a caring and loyal friend. The story has really good messages and as with every Pixar film, the animation and the level of detail is simply breathtaking.

Cars may not be your cup of tea but is a worthwile picture and I think it deserved the Best Animated Feature Oscar instead of Happy Feet which may be good but not as good at this one. Cars may be seen like the worst Pixar production but even worst Pixar means amazing and much much better than all the competition has to offer. Cars is an excellent film.

Cars arrived on Blu-ray on 2007 in a single-disc package. Now Disney has repackaged it alongside a DVD in order to promote the sequel that will premiere this summer in theaters. Cars BD is magnificent. You can watch every detail, every nuance, every texture in the screen. No compression artifacts are found in the print. Cars BD is amazing.

Likewise, the 5.1 uncompressed Audio is the equivalent of the picture in the sound department. You can hear everything with absolute clarity.

In comparison with other Pixar BD sets, Cars is somewhat light in the bonus features department but still has a lot of insight bonus material.

First you have the Cine-explore feature which allows you to see the picture in an interactive way where you can choose between two audiocomentaries (one with John Lasseter and the other with the animators), also this feature enables you to pick some featurettes that will appear from time to time. This mini documentaries include design of characters, settings, graphics, animation and more. If you prefer you can also watch this documentaries separately. You also have deleted scenes, a game, the shorts One Man's Band and Mater and the Ghostlight, the inspiration for the movie and more.

A DVD copy is also offered.

Sneak Peeks:
Some trailers include:

Cars is an excellent film that is worth watching. With stunning video and excellent audio and many insightful bonus material this BD/DVD combo is a must-own release. Completely recommended!!!
7 people found this helpful
See all reviews
Back to top
Get to Know Us
Make Money with Us
Amazon Payment Products
Let Us Help You
EnglishChoose a language for shopping. United StatesChoose a country/region for shopping.
© 1996-2021, Amazon.com, Inc. or its affiliates