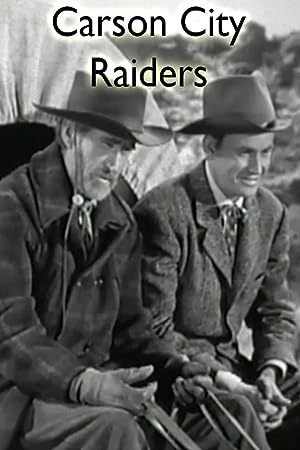 (9)
7.51h19487+
When a reformed outlaw becomes the sheriff of besieged Carson City, he is blackmailed by an old gang buddy, who is planning to take over a freight wagon outfit. Allan "Rocky" Lane arrives to sweep the gang out of Carson City.

EarlBReviewed in the United States on April 19, 2016
4.0 out of 5 stars
great old western
Verified purchase
It is a wholesome movie which you can watch for pure entertainment. It is somewhat predictable if you have watched any of the other movies with the same set of characters. I would recommend it for anyone who likes old westerns.

Cyndi ParkerReviewed in the United States on August 8, 2015
4.0 out of 5 stars
Carsten City Raiders
Verified purchase
It was just a good ole western! Enjoy
One person found this helpful

Golfer2420Reviewed in the United States on March 30, 2016
4.0 out of 5 stars
Watched these when I was a kid!
Verified purchase
Enjoy these old westerns!

bradley morrisReviewed in the United States on January 24, 2016
5.0 out of 5 stars
Five Stars
Verified purchase
like them all

Pam CassidyReviewed in the United States on August 9, 2016
5.0 out of 5 stars
Five Stars
Verified purchase
I love old westerns. Some if the best

J. LovinsReviewed in the United States on December 14, 2006
5.0 out of 5 stars
"Allan Rocky Lane B-Western Series ... Carson City Raiders (1948) ... Republic Pictures"
Republic Pictures present "CARSON CITY RAIDERS" (1948) (56 mins/B&W) (Dolby digitally remastered) --- relive those thrilling days when Allan Rocky Lane took us down the dusty trails with hard riding and straight shooting hitting the bull's eye with excitement every time ... the Allan Rocky Lane series of B-Westerns were a staple of Saturday matinees in the 1930s, 1940s and 1950s ... Lane's best known and most popular series, a total of thirty eight Allan 'Rocky' Lane features, all but six of which co-starred Eddy Waller as old timer 'Nugget Clark' ... The "Rocky Lane Series" would open with Rocky riding his horse Black Jack as their names appear on the screen, then moving on to the rest of the cast, director, screenwriter and cinematographer and other credits ... don't miss any of the Allan Rocky Lane features loaded with action that will leave you wanting more of his B-Western adventures.

Special Footnote, actor Allan Lane looked to better roles, he signed with Republic in 1940 ... after struggling a bit in his initial films, hit pay dirt after teaming with Linda Stirling in the popular serial "The Tiger Woman" (1944) ... his own serials with "Daredevils of the Red Circle" (1939) and "King of the Royal Mounted" (1940), Mountie Dave King proved popular and, around this time, he started gaining added attention as a photogenic and very personable cowboy star, with his trusty steed "Blackjack," ... Lane managed to churn out a bucketful of oaters every year beginning with "Silver City Kid" (1944)), for nearly a decade, trading blows with the bad guy Roy Barcroft and seeing justice prevail ... best remembered these days for his dashing good looks and saddle appeal on film ... it's no small wonder that Allan Rocky Lane's name was at the top of the list, working with the top directors of the day Howard P. Bretherton, Spencer Gordon Bennett, Joseph Kane, Wallace A. Grissell, Leslie Selander and R.G. Springsteen all under Republic Pictures banner.

Great job releasing "Carson City Raiders" (1948) - Allan Rocky Lane , the digital transfere with a clean, clear and crisp print...looking forward to more high quality releases from the vintage serial era of the '20s, '30s & '40s and B-Westerns ... order your copy now from Amazon where there are plenty of copies available on VHS, stay tuned once again for top notch action mixed with deadly adventure --- if you enjoyed this title, why not check out VCI Entertainment where they are experts in releasing B-Westerns and Serials ---Western Classics, all my heroes have been cowboys!

linda MclaurinReviewed in the United States on November 19, 2014
5.0 out of 5 stars
Five Stars
good western.
See all reviews
Back to top
Get to Know Us
Make Money with Us
Amazon Payment Products
Let Us Help You
EnglishChoose a language for shopping. United StatesChoose a country/region for shopping.
© 1996-2022, Amazon.com, Inc. or its affiliates