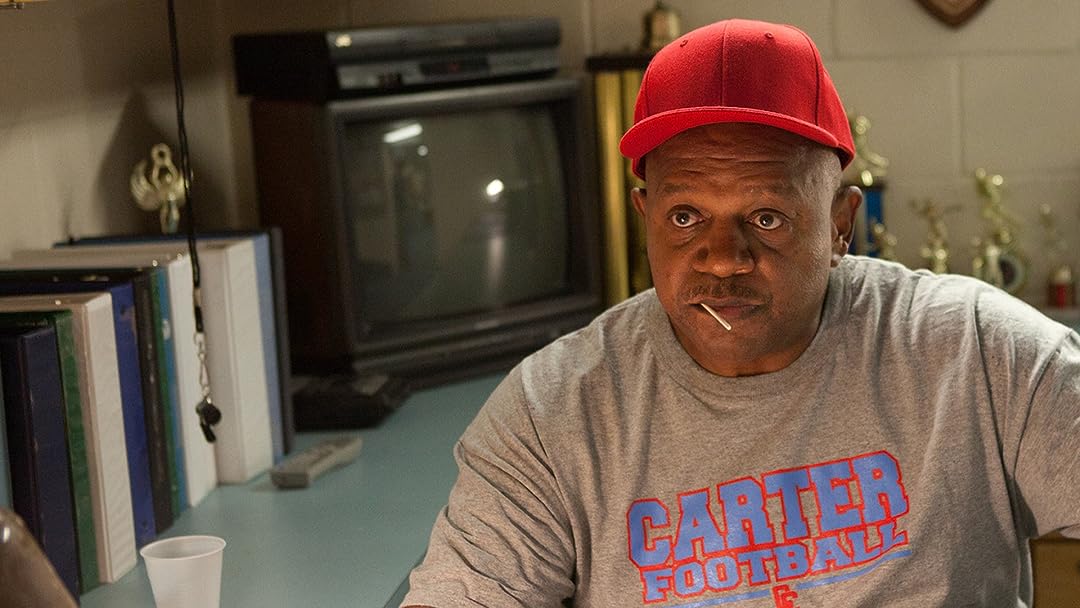 (138)
5.21 h 51 min2016X-RayPG-13
During the 1980s Carter High School in Dallas, Texas was a football powerhouse. This is the story of four of the student athletes whose off the field activities cost them their future.

Stephen LinvilleReviewed in the United States on March 20, 2017
5.0 out of 5 stars
A Carter Graduate Loves the Accuracy of the Film
Verified purchase
I applaud this movie for telling the essence of a true story that is far more amazing than fiction. I am white and as a Carter High school graduate of 1972, I witnessed the closing of J. Ervay (an all black school) in an attempt to integrate Carter, and the ensuing white flight. This movie actually downplayed the racism that was at the center of the attempt to keep Carter from competing. Newspaper articles accused Carter of being a black football factory while at the same time suburbs were pouring millions into building big stadiums, enlarging coaching staffs and building big high schools for only juniors and seniors in order to ensure a big pool of seasoned athletes. The local newspaper described Carter as a poor inter city school of blacks and Mexicans. There were virtually no Mexicans at Carter and the high school is over 10 miles from Downtown Dallas. the journalist had obviously never visited Carter and was inventing stereotypes. Carter is in the southern part of the Oak Cliff section and Mexicans lived mostly in northern Oak Cliff. The movie did a great job of visually showing the nightmare of the UIL's attacks on the Carter football program. I believe that Plano East, a suburban school, had a similar issue a few years later and very little happened to them. I have long heard impolite groans when I explained to folks in North Dallas where I was raised. Many individuals from Oak Cliff have excelled over the years (bluesmen T-Bone Walker and Stevie Ray Vaughn are notable examples). The idea that the folks in the suburbs can't buy superiority in everything is disturbing to many in the Dallas metro area. I also happen to have a degree in Theatre from UTD and I would like to add that the acting in the film is very good in my opinion.
4 people found this helpful

Brooklyn PhantomReviewed in the United States on August 8, 2016
4.0 out of 5 stars
Fox and Dutton deliver a powerful fact based film about the results of foolish choices!
Verified purchase
Spoiler alert!! This was an entertaining film about an excellent high school football team. The key members of the team should've had more character development. Nevertheless, the story was of a team that triumphed over adversity was inspiring. I just couldn't believe how stupid these players were to endanger their future with petty crimes. The sentences were extreme for nonviolent crimes. I couldn't believe that they were stripped of their championship after the convictions. This story is tragic. Several players who avoided making foolish choices did go on to have successful football careers. This film should be watched by all teens. It let's all viewers know that foolish decisions can destroy your future. Before the crimes occurred this was a great story with a happy ending. The team overcame many scandals and won the championship. The whole community applauded them for their excellence. Fox and Dutton were excellent as always. Highly recommended.
8 people found this helpful

Amazon CustomerReviewed in the United States on November 4, 2016
2.0 out of 5 stars
I was Robbed by these guys.
Verified purchase
I managed a Diamond Shamrock store and filling station on Zang Bluv. in Oak Cliff, Dallas, Texas in1988-1989. One of the boys from the Carter High
School foot ball team came in to rob me shortly after 6am. He was a nice young man. He said good morning mam. I said fine- may I help you. He said Well you see it's like this and he stuck a 9 mm Ozzy in my face. My friend was working at a 7/11 on Twelfth Street . She was robbed the following evening by one of the boys using a 9 mm Ozzy. They were not mean. It's the gun that bothered us. The movie is wrong. They showed them being loud and cussing and using a hand gun at made up robberies . Looks to me like they just made some stuff up to make that movie.
I was never mad at them. They were good kids who made a bad decision and they paid a Horrible price for it. I am now a 75 year old great grand mother of five.
I hope they paid those boys well. They spent 16 to 25 years in the pen for that where the mean one that robbed me cussing me and spitting in my face-he was a drug addict and he got 10 years probation. There was nothing fair in any of that.

rayalenReviewed in the United States on December 30, 2019
4.0 out of 5 stars
Sad Story But True
Verified purchase
It could have turned out differently for the young men had they listened to their coach: "Make the right choice the first time." and "Stay humble!". Great bonus feature include interviews with three of the young men and the actors playing their role, and an interview with writer, producer, director Arthur Muhammad.

Doug BReviewed in the United States on January 19, 2017
1.0 out of 5 stars
Awful movie
Verified purchase
Terrible movie. Really bad script, with little to no point. In fact, I think I've spent more time writing this review than the screenwriter spent on the movie. Seems like it was just another "feel good football movie." Unfortunately, this one just stinks. Don't waste your time with it.

CowboysFan9Reviewed in the United States on September 24, 2016
3.0 out of 5 stars
Movie is well acted - but not acurate.
Verified purchase
The movie itself was well acted. I do not think it portrays actual events because they did cheat their way into the play offs. Anyone who lived during this time frame knows it. But other then that the actors were good.
One person found this helpful

D GrayReviewed in the United States on February 21, 2020
1.0 out of 5 stars
DVD Stops
Verified purchase
I bought this DVD to show my 8th grade leadership class and the DVD stops in the same spot and unfortunately it is passed the time to return it and I will have to buy another one for another vendor.