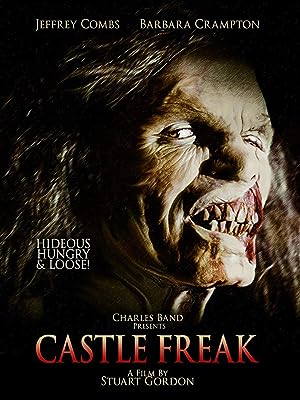 (384)6.01 h 34 min1995R
When John inherits a castle in Italy, he moves his family and takes up residence in the medieval estate, only to discover that some terrible evil has escaped its dungeon chains and is on a bloodthirsty killing spree.

Watch with AMC +
Start your 7-day free trial
Add to
Watchlist
Redeem a gift card or promotion code
By ordering or viewing, you agree to our Terms. Sold by Amazon.com Services LLC.
Write review

St JackReviewed in the United States on July 7, 2019
5.0 out of 5 stars
A Lost Gem (For Re-Animator Fans Especially!)
Verified purchase
I was born in 1977, seen almost every scary movie, total pop culture nerd, yet here it is 2019 and this July is the first time I EVER ran across this gem of a horror movie. This is on scale with the best horror from the late 80s and early 90s. This is AAA. This is great!

I watched it and was blown away and I am a jaded middle-aged man. This movie was great for that 80s/90s nostalgia fix. Also, this movie features a lot of the players from Re-Animator.

About Ding-Dong gate: early there is a full frontal nude scene of Giorgio and his penis is clearly severed. Right away I thought that the Duchess had scissored off the penis as yet one more way to get back at her husband: see, your firstborn son will never be a man! However, while it may be total removal of the testes, not the penis, that truly emasculates a man, I think in this movie it was a special hell for Giorgio: he had no penis, but all of the desire and testosterone and rage of a normal man. Yikes, scary!!!!

About being based on ye Olde HP de Miskatonic: No one really does HP Lovecraft-based movies right, but his stories are all brilliant exposition and terrible dialogue, so how to do a movie based on that style anyway? It can be done, but it is as hard as translating William Burroughs or James Joyce into moving pictures and images. Still, this movie does a passable version of the very short but iconic HP Lovecraft story "The Outsider" but like in Mary Shelley's original work, the monster was very intelligent, but the movie version is debatable on how mad vs lucid the monster is.

Basically, it comes to this:
Bad horror movie trope #4977: If you inherit a castle or big mansion, check EVERY room before you move in.

Thank God for the Jeffrey Combs and the Brad Dourifs of the world. We love you. <3

imnotoneofyouReviewed in the United States on November 10, 2019
4.0 out of 5 stars
Blu Ray review
Verified purchase
I first saw this in '96 after buying the vhs on a whim. As a horror fan I was not disappointed. What attracted me to the film originally was my love for the Reanimator movies (Gordon Stuart and of course Jeffery Combs and Barbara Crampton).
There is no 'black humor' here but straight up horror.
My intention here is not to rate the film itself (buy it. Watch it. Enjoy) but of course the Blu Ray release.
This particular release runs at an hour and a half. I've seen versions running at an hour and thirty five ( this Blu Ray clocks in at 90 minutes. Don't remember the original vhs run time and I'm not about to dig it outta my attic to see).
At any rate; the extras on this Blu Ray are excellent. Really. You have to watch the William Shatner interview.
That makes the extras.
The Videozone "making of" is interesting as well.
The trailers suck...nothing to see here.
The only reason I give this 4 out of 5 stars is the lack of a commentary track.
3 people found this helpful

bugmanReviewed in the United States on August 8, 2016
4.0 out of 5 stars
if you inherit a castle, check all the rooms first
Verified purchase
castle freak (1995). been a long time since i watched stuart gordon's fantastic little movie, and i was especially moved by its' heartbreaking emotional center. i could watch jeffrey combs and barbara crampton read a telephone book, but fortunately, they get to read dennis paoli's creepy script instead, as they play a fractured husband and wife, trying to pick up the pieces of their lives with their recently blinded daughter as they head to collect their inherited castle in italy. crampton and combs play this dynamic brilliantly, and the tension between these two is oppressive. when we discover why their family is falling apart, it's a kick in the gut. how do you move on from that? castle freak has a dark, grainy, and mature atmosphere that is punctuated by jarring screams, cries, and rattling chains. the make-up on the monster is creepy as XXXX, and the music is typically effective richard band ripping off bernard herman. i do think there were some unnecessary scenes of sexual violence, scenes that threatened the overall tone of the movie, but then stuart gordon has always challenged my sensibilities in this area. certainly, the creature was dealing with some issues, so the scenes in question weren't out of left field or lascivious; the scenes were unpleasant to watch, as they should be. the standard issue dvd is terrible visually, but it does contain a delightful, weird, and awkward sit down with combs, crampton, and gordon being interviewed by...william shatner! shatner really wants to talk about himself, lovable egoist that he is, but stu, jeff, and barb manage to hold their own.
8 people found this helpful

Tyler JobsonReviewed in the United States on February 9, 2017
4.0 out of 5 stars
Beware deceased family members bearing castles
Verified purchase
This Stuart Gordon horror yarn is about the American Reilly family - John (the legendary Jeffrey Combs), Susan (Barbara Crampton) and their blind daughter Rebecca (Jessica Dollarhide) - who inherit a castle in Italy. Already damaged by a death in the family and John's alcoholism, an uninvited guest in the castle's basement makes matters even worse. While not a classic like Stuart Gordon's Re-Animator, it's still a very solid entry in his filmography, mostly because of the castle's creepy vibe, the freak's unnerving depravity, the father's Jack Torrance-like volatility and the Reilly family's foreign alienation. Also, Combs once again proves that he's one of the best horror actors in the business.
3 people found this helpful

Paul S. PersonReviewed in the United States on May 23, 2021
3.0 out of 5 stars
Castle Horror Story
Verified purchase
No, literally -- this is about a man who inherits a castle in Italy and moves there with his family.
Well, what's left of his family. What happened in the past shows up in the flashbacks.
The castle contains a secret -- a very hungry and very abused secret -- which eventually breaks out and causes havoc.
Which causes various complications.
But not much in the way of surprises.
Still, it is well enough done. Indeed, for a Lovecraft film, it is very well done, as they tend to not be done all that well, in general. Bad luck, that, but what can you do?
If you like Lovecraft, or castle horror, you may find this worth watching.

Random UserReviewed in the United States on September 4, 2016
5.0 out of 5 stars
Surprisingly good
Verified purchase
I was browsing through the channel catalog and came across this movie by chance. I didn't expect much of the movie but it was surprisingly good. If you excuse the hamming of the lead actor and see the movie as a whole you wouldn't be disappointed.

Has elements of suspense and horror without much of special effects. Good old story telling. This movie has some J-Horror vibe to it. The story is somewhat reminiscent of Sadako from the Ringu series.

Bottom line: If you're looking for a movie that relies on story telling to induce horror, then this movie does a really good job at it. Yes, there is some hammy performances but can be easily ignored.
4 people found this helpful

Nib GuruReviewed in the United States on March 6, 2018
5.0 out of 5 stars
Don't Judge a Movie By Its Cover/Title
Verified purchase
Charles Band started Full Moon Features as a way to distribute movies as direct to video. As a result, fantastic films such as this one were lost to a potentially wider audience. Not to mention the title is too simplistic and even childish. The plot is complicated (in a good way). The acting is exactly what it needs to be, as the movie has deep family drama. It's engaging, it satisfies on every possible level. Don't let the cover of the book and it's lame title fool you. This is a solid film!
2 people found this helpful

TabbygailReviewed in the United States on June 18, 2016
4.0 out of 5 stars
It's Gordon, Combs, and Crampton back again.
Verified purchase
Straight horror film from Stuart Gordon with great performances by Combs and Crampton. The gore is excessive as you would expect, however this time Gordon slips more into tastelessness than usual. Many will be disappointed that Comds isn't giving the chance to display his flair for the sardonic or the tongue in cheek that made him a horror favorite, but he handles it extremely well. Interesting story keeps you into it. You could do a lot worse.
2 people found this helpful
See all reviews
Back to top
Get to Know Us
Make Money with Us
Amazon Payment Products
Let Us Help You
EnglishChoose a language for shopping. United StatesChoose a country/region for shopping.
© 1996-2021, Amazon.com, Inc. or its affiliates