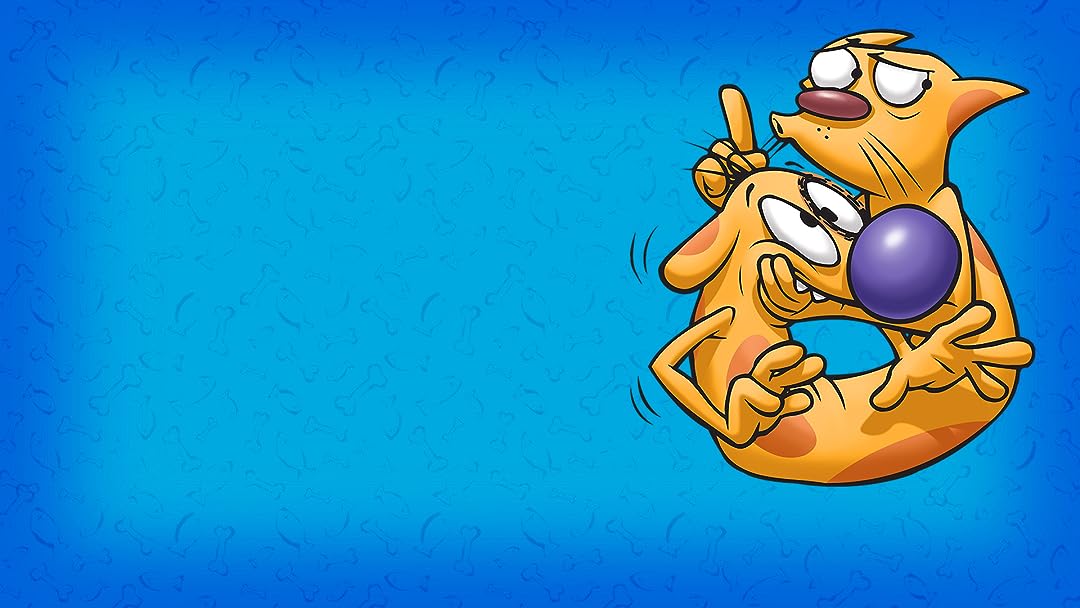 (417)
6.61998TV-Y
Cats and dogs were not meant to live together. This proves true in CatDog, where these two brothers constantly find themselves at ends on everything, even the same body!

Soul to StealReviewed in the United States on June 11, 2010
5.0 out of 5 stars
CatDog Season-1
Verified purchase
I realize many fans complain that these dvd sets are too expensive and I agree, but I'm still very thankful Amazon's bringing back some of the old excellent nicktoons that I enjoyed through my young carefree years surfing and sunbathing on the beach, and I plan to keep buying them. Amazon has completed all 5 seasons of "Hey Arnold" [[ASIN:B001EO5JJS Hey Arnold! - Season 1]]and completed all but two episodes from the 3 Best of seasons of "Doug"[[ASIN:B001EHDSOS Doug- Season 1 (3 Disc Set)]], I only wish they would complete the "Angry beavers"[[ASIN:B003U4VGH4 The Best of Angry Beavers - Season 1]],"Rugrats"[[ASIN:B00264H48O Rugrats Season 1 (3 Disc Set)]],"The Wild Thornberrys"[[ASIN:B003TU137M The Wild Thornberrys - Season 1]] and "Rocko's modern life"[[ASIN:B001EHDSRU The Best of Rocko's Modern Life - Volume 1]] dvd sets a little faster instead of taking a year or longer between sets. At this rate I'll be 35 before they complete the 10 seasons of the "Rugrats" >_<

CatDog Season-1 contains four dvd's, Audio and picture quality in these dvd's is very good and plays perfectly in my Sony 400 Dvd carousel unit. CatDog could be one of the most underated nicktoons ever created, its not psychological humor like "Hey Arnold" and its not as endearing to fans as say "Doug" or the "Rugrats" but it does hold its own against the likes of "Spongebob Square pants". Speaking of Spongebob Tom Kenny who does the voice for Spongebob also did the voice for Dog.

Here is a list of episodes on each disc,

KylaReviewed in the United States on March 29, 2020
5.0 out of 5 stars
My childhood show for my children!
Verified purchase
Bought Catdog for my young boys. I used to watched Catdog growing up and it was one of my favorites! They will be forced to watch it. . . Haha! Jk. They love it and thinknits so funny!
One person found this helpful

TuiReviewed in the United States on February 21, 2020
2.0 out of 5 stars
Not Complete Season 1
Verified purchase
Missing 8 episodes ...
2 people found this helpful

4X4-4funReviewed in the United States on August 2, 2013
5.0 out of 5 stars
Nickelodeon's pre-cursor to Spongebob
Verified purchase
You may have seen some of these names in the end credits for SpongebobSquarepants. CatDog has: Tom Kinney as voice talent, Derek Drymon with writing and directing credits, and Paul Tibbit with animation credits. They all had to pay their dues in lesser cartoons somewhere before shooting to the stratosphere--this is one of those launch pads. While the premise is completely silly, and even more difficult to explain to an 8-year old, this series is fun from start to finish, from the title song all the way through to the end of each episode--at least for me. That is because I tend to like slap-stick, I like reluctant buddy movies (i.e., "Odd Couple"), I don't mind stock characters, and I even like the frequent predictable gags and plots in this one. It's that they are all done well enough that I find that am watching episodes all the way through again on Amazon (with the aforementioned 8-year old).
One person found this helpful

David St. JeanReviewed in the United States on June 17, 2019
4.0 out of 5 stars
👍
Verified purchase
Good show that you’ll enjoy!

KaylaReviewed in the United States on May 21, 2015
5.0 out of 5 stars
A great show from the very start
Verified purchase
Catdog was an amazing and entertaining show right from the very start! The animation was always good and maintained throughout. Storylines are easy enough for kids to follow, but there are plenty for adults to love as well! I find myself chuckling each and every episode!

Rebecca SwillingReviewed in the United States on February 7, 2020
5.0 out of 5 stars
Son loved it
Verified purchase
Cute item for a child or pre-teen

shabbydebbieReviewed in the United States on May 29, 2013
5.0 out of 5 stars
CatDog?
Verified purchase
My 4 yr old grandson thinks CatDog is great! Oh, and his 62 yr old Grandpa agrees.... They keep trying to get me to watch it, but its the perfect time for me to retreat with a good book. So....although I haven't watched it, I also think its great!
3 people found this helpful
See all reviews
Back to top
Get to Know Us
Make Money with Us
Amazon Payment Products
Let Us Help You
EnglishChoose a language for shopping. United StatesChoose a country/region for shopping.
© 1996-2022, Amazon.com, Inc. or its affiliates