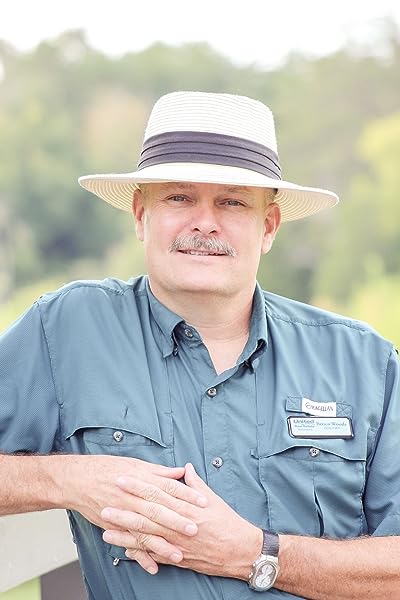 by Brisco Woods (Author)
4.7 out of 5 stars 59 ratings
Book 17 of 17: The Fallen World
See all formats and editions
Sorry, there was a problem loading this page. Try again.

Asher Mallone just wanted to do his time and retire. He and his family had plans. Unfortunately for him, the Teledyne Corporation had its own ideas, and they didn’t track with Mallone’s.

The more he did and the better he became at his job, the more important tasks Teledyne assigned him, ultimately culminating in the creation of a force of corporate espionage specialists better than any other. Past, present, or future.

Retirement could wait a little longer.

But there are forces both inside Teledyne and out who are bent on controlling everything and everyone in the world… no matter the cost. And Asher and his Specialists stand between the Corporate masters and everything they want.

Brisco Woods was born and raised in the Appalachian region of East Tennessee. His first pair of boots were issued to him by the USAF when he showed up to basic training in homespun pants and bare feet. The Air Force, in all its wisdom, thought he would be a great candidate to work on nuclear ICBM’s, so he was sent to the cornfields of Illinois to learn what an Intercontinental Ballistic Missile was. After some intense training and discovering what real winter was, he thought, off he went on his first over seas assignment, to North Dakota.

Through his career of 23 years in the US Air Force, he went on to work on avionics equipment on several different air frames and then spent his last 4 years in Command and Control. He eventually got tired of going into work on the ground floor and taking an elevator down to the concrete cave that was his life, and retired.

After having to write a separate resume for every job he was applying for, he decided “to hell with this” and became a Realtor.

Upon seeing how successful his little brother and sister were as authors, he caved in to his brothers constant jabbering about writing and made a story in the Fallen World universe that this same brother had created.

Since the first story was received well, he has branched out to some SciFi and done a few of stories in Kevin Steverson’s Salvage Universe. He also completed a novel from the original Fallen World tale, another short story in Among The Embers, and a novel from the character introduced there. He has an immediate follow up to that novel and two in the Salvage Title universe in the work with more to come.

Read_for_Fun
5.0 out of 5 stars Interesting
Reviewed in the United States 🇺🇸 on October 3, 2022
Verified Purchase
Interesting story of some of the events that led to the fallen world. A bit of a cliff hanger as it leaves you wondering what has happened to the leading character. Can't wait until the follow-up story. Interesting way also how the story ends, leaving you scratching your head and wondering.
Read more
Helpful
Report abuse

Kindle Customer
2.0 out of 5 stars Disappointing
Reviewed in the United States 🇺🇸 on August 8, 2022
Verified Purchase
The worst of the series--disjointed and unintelligible plot, poorly developed characters, juvenile dialogue.

If the next book is thus bad I'm done with this series.

James P. Ruff, Jr.
5.0 out of 5 stars Great read!
Reviewed in the United States 🇺🇸 on September 17, 2022
Anyone who has read any of the fine books in the FALLEN WORLD series will want ti to read this one, I;, not giving any spoilers,. Those have already been hinted in other reviews of this book. That ad=su=ide, it's a fabulous prequel to the Corporations that caused the fallen world. Don't miss it!
Read more
One person found this helpful
Helpful
Report abuse

Peter J. Kurt
5.0 out of 5 stars In the beginning, there were baby steps and then things started going down hill fast!
Reviewed in the United States 🇺🇸 on August 6, 2022
Love the book! I always wondered how things got so twisted and out of control and this book starts to answer a lot of those questions. The Corporations become so powerful that not only are they above the law, they govern their little fiefdoms with no questions asked. Employees that shrugged off or ignored the sense that the Corporation is doing evil while they chased the almighty dollar. And those Employees that did question or spoke out often died under suspicious circumstances. Doctors that no longer looked in awe at the human body, but devised ways to supplant, enhance and then enslave the human body. I'd tell you more, or mention that today's reality seems like the beginning baby steps towards this Universe, but I value my life.....If you've never read a novel from The Fallen World series, this is the one you ought to start with! But if you have, this one answers some of the questions we all wondered about and all the while creates more questions that need answering.....and I can't wait to see the rest of the beginning of the end fleshed out some more!
Read more
6 people found this helpful
Helpful
Report abuse

Ian Titler
5.0 out of 5 stars Before the Fall(len world|)
Reviewed in the United States 🇺🇸 on August 6, 2022
Interesting take on life before the nuclear melt down and how the Corporations accumulated more and more power, by more and more "anything goes" methods. Without giving too much away:
The main character, Asher, a family man, just wants to make enough to support his family to a decent standard then retire early with them. Life has other plans.
His computer/programming talents are noticed by one of the big Corporations, and he is employed, after his firm is taken over, to harden and improve their computer systems to the level they are impossible to hack - on a much higher salary with hefty bonuses
He and his team are so successful, they are given more and more difficult tasks, while slowly becoming aware that there are some dirty deeds being done on the quiet. His next task is to form a team of Specialists, to understand what's needed, he must become one himself, still quietly checking inti the killings and dodgy deals. Vvery good story.
Read more
4 people found this helpful
Helpful
Report abuse

Kindle Customer
5.0 out of 5 stars Buy this book, put the coffee on and get comfortable! You aren't moving!
Reviewed in the United States 🇺🇸 on August 8, 2022
This FALLEN WORLD prequel is great! You will not be able to put it down. It fills in a lot of the questions and background information. The book is well written, characters well developed and the plot just hums along.

Brisco does a wonderful job of setting the stage for the steps that create "This FALLEN WORLD! A must read for fans!
Read more
One person found this helpful
Helpful
Report abuse

MR
5.0 out of 5 stars WOW, just truly fantastic!!!
Reviewed in the United States 🇺🇸 on August 5, 2022
I really love the Fallen world series; I've enjoyed all the books so far. This one though was really good. Didn't want to put it down. Love Asher, love that it starts before the fall and leading up to it so you can see how things are slowly coming together into a perfect storm of disaster. It's great that he works for Teledyne as well. Can't say enough good things about this one, it's not to be missed. I can't wait for a follow up to this one continuing the story up until things really go bad and seeing what happen with Asher and his family.
Read more
6 people found this helpful
Helpful
Report abuse

Bryn K
5.0 out of 5 stars Teledyne
Reviewed in the United States 🇺🇸 on August 9, 2022
Asher Mallone is an up and coming star for Teledyne after they acquired Texas Technology. Maybe a bit naive about some of the "dog eat dog" culture but he learns to stay out of trouble. His jobs include setting up proprietary software computer firewall systems and developing information gathering systems; both via computer and in person for Teledyne! Yes training spys and the first Teledyne Specialists.
Read more
One person found this helpful
Helpful
Report abuse
See all reviews