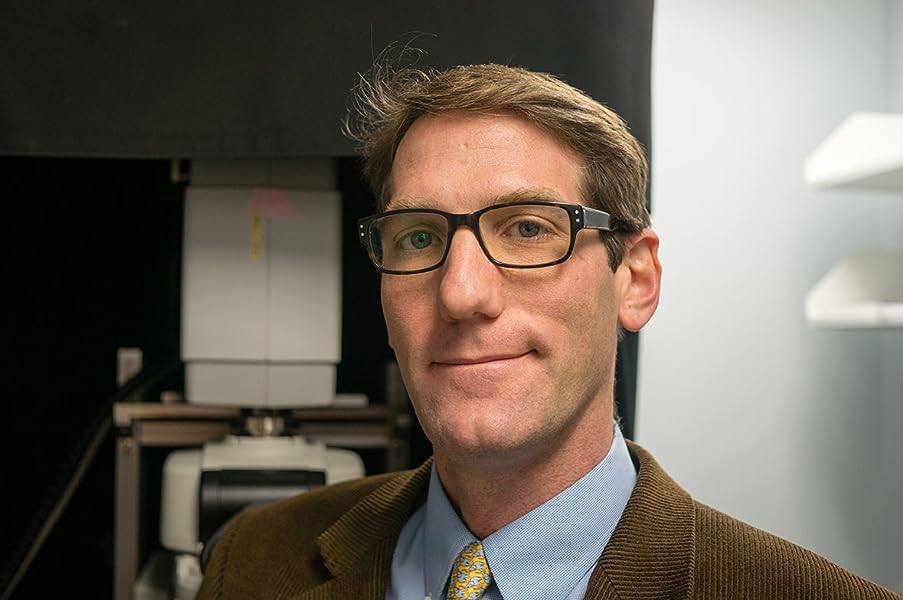 The Cell: Discovering the Microscopic World that Determines Our Health, Our Consciousness, and Our Future Paperback – April 4, 2017

“Beautifully written, inspiring philosophical prose presenting a delightful muse on the microscopic world that matters more than we ever before imagined.”
—Spencer Shorte, PhD, group leader and director of the Imagopole resource at the Institut Pasteur in Paris

“A bird's-eye view of the amazing edifice upon which life was built, the cell. Joshua Z. Rappoport gives a brilliant account of how it works, how humans discovered it, and the consequences for life on earth.”
—Steve Busby, FRS, University of Birmingham UK

“Nicely conveys the historical background behind classical benchmarks in cell biology, and the excitement of recent advances in visualizing the inner workings of our cells.”
—Mark Pallen, MD, PhD, author of The Rough Guide to Evolution and professor of Microbial Genomics at Warwick Medical School

Dr. Joshua Z. Rappoport received a bachelor’s degree in Biology from Brown University and then went on to earn a Ph.D. from the Program in Mechanisms of Disease and Therapeutics at the Mount Sinai School of Medicine Graduate School of Biological Sciences of New York University. Following defense of his thesis Dr. Rappoport went on to perform postdoctoral work at The Rockefeller University in New York City in the Laboratory of Cellular Biophysics. Subsequently he was recruited as a tenured faculty member in the School of Biosciences at the University of Birmingham in England.

In 2014 Dr. Rappoport has returned to the United States where he is currently the Director of the Center for Advanced Microscopy and Nikon Imaging Center at the Northwestern University Feinberg School of Medicine, and a faculty member in the Department of Molecular and Cell Biology. Dr. Rappoport’s scientific perspective aims to develop and apply cutting edge microscopy to address fundamental questions in cell biology.

Dr. Rappoport lives in Chicago with his wife Ema, a neuroscientist, and their dog Kris.
Start reading The Cell on your Kindle in under a minute.

4.0 out of 5 stars
4 out of 5
8 customer ratings
How does Amazon calculate star ratings?
Amazon calculates a product’s star ratings based on a machine learned model instead of a raw data average. The model takes into account factors including the age of a rating, whether the ratings are from verified purchasers, and factors that establish reviewer trustworthiness.
Top Reviews

Sylvan G. Feldstein
5.0 out of 5 stars An Excellant Introduction to the Science
Reviewed in the United States on July 22, 2018
Verified Purchase
While I am not professionally trained in molecular biology, I am trying to educate myself in this area. For me, I found this book a worthwhile introduction that gave me basic ideas that I hope to use in understanding a more detailed text.
Read more
One person found this helpful
Helpful
Comment Report abuse

Jeff
4.0 out of 5 stars Four Stars
Reviewed in the United States on September 19, 2017
Verified Purchase
Great book if you want to learn the basics of the cell and have a good time.
Read more
Helpful
Comment Report abuse

Luke Washburn
3.0 out of 5 stars Meh
Reviewed in the United States on October 30, 2018
Verified Purchase
There were some interesting sections (parts III & IV) but the rest was a bit dull.
Read more
Helpful
Comment Report abuse

Aaron C. Brown
TOP 1000 REVIEWER
3.0 out of 5 stars Packed with great information and bad metaphors
Reviewed in the United States on January 12, 2018
This book has one great strength and one great weakness. The strength is the author's deep knowledge of cell biology, chemistry and physiology, which he communicates clearly. If your knowledge of cells is limited to high school or one semester college biology, there is a lot left out. Also if your education was more than a decade ago, a lot has been learned since.

I had a pretty good general science education, but cells were treated only on the surface (with interactions that mediated larger scale physiologic processes) and nucleus (reproduction and genetics) with only a few names to memorize for the rest--which makes up nearly the entire cell volume. Cells were important only as constituents of larger entities either in space (multi-celled organisms or masses of single celled organisms) or time (evolution).

Unfortunately, the weakness is the author connects these ideas using dramatic but highly misleading metaphors. No one but a cell specialist is going to remember the thousands of facts in this book without metaphors to connect them. A dull teacher will just give the facts, and let the students come up with whatever picture occurs to them naturally (or more likely forget the facts as soon as the exam is finished). A great teacher connects the ideas with memorable and useful metaphors, while warning against overreliance on metaphors. This author is good at constructing striking metaphors. They work to connect the facts, but also suggest too many non-facts, and there are no warnings.

One random example is:

"Your first reaction is certainly amazement at everything that's going on in here and the speed at which it's all happening. Cells are busy places, crammed full of vesicles, enzymes, and organelles all fluttering around in a frenzy of activity. Motor proteins can carry cargo around at a speed of one micron per second. Considering that vesicles--which are little cargo containers--can be as small as 50 nm across, that would be like a car that is 15 feet long moving 200 miles per hour."

That is a memorable picture that is important for picturing many of the facts in the book. But is it accurate? A vesicle moving 20 times its length in one second is fast for a car, which more typically would move around 5 times its length in that time. But it's barely moving for a housefly that can fly 1,000 times its length in a second. On the other hand, the Great Wall of China would have to accelerate from zero to 3% of the speed of light to match that.

Of course, there is no exact analogy between microscopic events inside a cell and familiar macroscopic events. Should students think of a cell as a busy place, like a racetrack with 200 mph cars and pit crews doing complex maintenance in seconds? Or as a lazy place like a summer meadow with flowers growing and bees gently buzzing?

Dividing distance traveled in a second by length is not a reliable guide, and one that I think the author chose for drama--which makes him seem like a good teacher--rather than careful analysis. It suggests many false things. For example, if two race cars crash head on at 200 mph, they will fly into pieces. But two motor proteins that crash head on at 1 micron per second will be completely unaffected. Comparing momentum to the binding forces that hold the things together might be more relevant than length. On the other hand the one micron the vesicle moves per second is an appreciable fraction of the diameter of the cell, say about 1% for typical human cells; where the 300 feet a car moves is trivial compared to the size of the earth.

I don't have a better metaphor myself, but the point is the author serves this one up without qualification. Students will remember the picture long after they're forgotten the numbers, and in many cases will be misled.

I have some other objections. The author uses four different length units. Microns to nm is an easy conversion, but is would be even easier with consistent names. But why convert at all, why not do everything in microns or nanometers, at least in the same paragraph? And feet and miles are more challenging to convert, either to each other or to metric length units. And "crammed full" is not accurate. Even collectively those components are a negligible fraction of the volume of a cell.

I realize I've spent nearly the entire review on two sentences of the book, but there are dozens of similar examples in the book, and they are likely the parts that will stay with students. On the good side, there are so many of them that even without warning, most readers will realize they are individually unreliable. But I would have much preferred a few well-chosen illustrations and discussion of when they can and cannot be applied.

Steve G
5.0 out of 5 stars Great nonfiction storytelling
Reviewed in the United States on April 1, 2017
I loved this book. In it, author Joshua Rappoport explains the workings of the cell in a plain language way and makes great use of analogies to explain things. Rappoport also displays a good sense of humor which is important in an otherwise detailed (but not too detailed) book. Some biology background is useful to understanding the material. Biology changes quickly and it is good to have an up-to-date book. My favorite part of the book is towards the end, the section titled “The profession of cell biology” that gives a more societal look at cell biology. If the book had one weakness, it would be the part on the mechanics of microscopy, but this was, nonetheless, interesting and important in the context of understanding how the cell works. I strongly recommend this book for anyone with an interest in science and since Rappoport is such a good storyteller, this book will be fun even for people with a strong background in biology who will already be familiar with the material.
Disclosure: I received a complimentary copy of this book via Netgalley for review purposes.