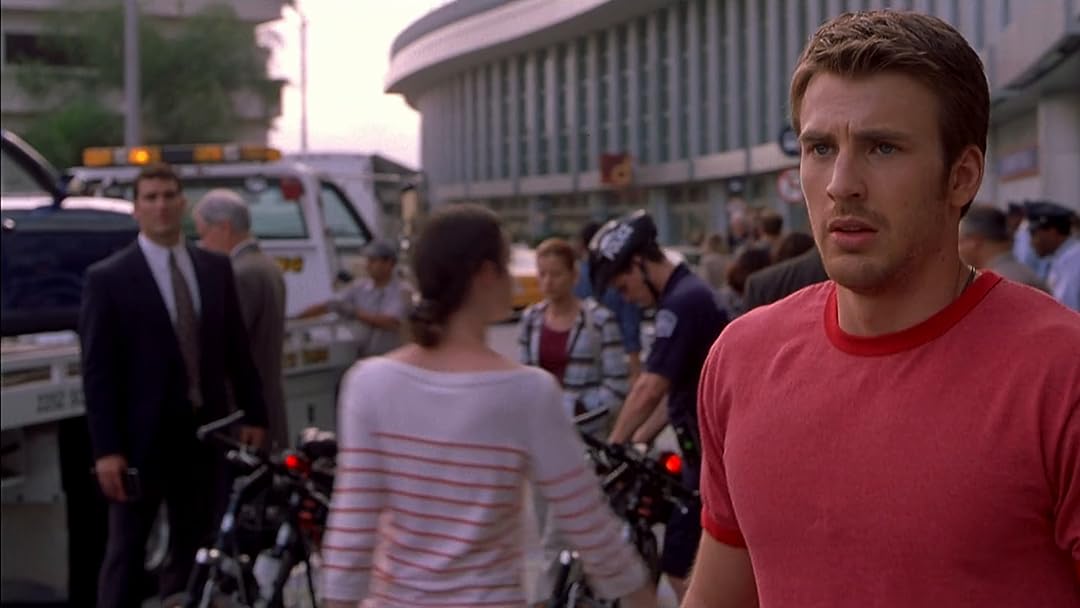 (2,241)
6.51 h 33 min2004X-RayPG-13
After getting a frantic call on his cell phone from a kidnapped woman, a young man must battle his way through a ruthless world of lies and murder to rescue her.

Meeker PilgrimReviewed in the United States on September 29, 2019
3.0 out of 5 stars
Mediocre, but Sometimes Amusing Action Potboiler
Verified purchase
For the most part, the actors in this movie phoned it in.

Kim Basinger's husband witnessed and recorded on his cell phone the execution of a suspect by dirty cops. They tracked him down, kidnapped Basinger and threaten to kill her unless her husband, Craig, gives them the evidence to destroy. Held in an upstairs room, Basinger manages to manipulate a broken landline phone to get a call out to a random number, which turns out to be a cell Chris Evans, a goofy young fellow who was just dumped by his girlfriend, Jessica Biel. This has no relevance to the actual plot, but Biel was big at the time and someone probably figured they would love an excuse to appeal to hot-blooded adolescents by getting her into the mix.

Basinger has never been a great actress, but this role was ridiculous. She is supposedly kidnapped, in desperate straits, and facing death if her husband doesn't come through. She evokes all the emotion one would expect if Starbucks got her order wrong. Seriously, I have expressed more honest emotion over a flat tire than she manages for this desperate, life-threatening ordeal. She was just awful.

The pre-Captain America Evans exudes a goofy, jug-headed sort of charm and it was a bit of fun to watch him vamping before he became an A-lister.

Jason Statham as the ringleader of the dirty cops brought his usual intense focus to the role - though even he seemed as if he had slightly lowered his caffeine intake before each day's filming. The only character who was fully into his part was William Macy who played a cop about to retire who stumbles on and unravels the blue conspiracy, ultimately saving the day with Evans. Macy always reminds me of a morose basset hound. In this one, it is not his stellar intellect that breaks the case, just his dogged pursuit of it. He is the little Basset that could - and does so with amusing charm.

I didn't regret seeing the film. It never had me on the edge of my seat, but it kind of made up for it with its unintentional humor. I never cried, I never worried for the characters - but I did get enough chuckles to make it worth while.

Allen Garfield's #1 fan.Reviewed in the United States on April 22, 2020
4.0 out of 5 stars
directed by Burt Reynold's former stuntman & and did Snakes on a Plane? A Larry Cohen story? I'm in!
Verified purchase
Bonus Features These extras are all recycled from the 2005 DVD, but two of them are now presented in high definition. The vintage bonus features begin with a rather chatty (and occasionally annoying) Audio Commentary featuring director David Ellis and crew/family members Tawny & Annie Ellis, who respectively served as Associate Producer and Assistant Stunt Coordinator. Other guests are also called via cell phone (har har) to offer occasional insights and production stories. We also get a short collection of Deleted & Alternate Scenes (5 scenes in 1080p, 5:56 total), the somewhat laughable tech featurette "Celling Out" (480p, 19:39), an enjoyable Production Featurette with key cast and crew members (480p, 25:40), a "based-on-real-events" featurette entitled "Code of Silence" (480p, 27:00) and the film's original Theatrical Trailer (1080i, 2:27). Overall, this is a solid mix of bonus features...but again, nothing new here. Final Thoughts
Cellular isn't exactly highbrow entertainment or 100% original moviemaking, but it is a solid action/thriller with a well-rounded cast, great action and plenty of twists along the way. In other words, it's better than most "check your brain at the door" movies, if that does anything for you. New Line's Blu-Ray package easily beats (or at least equals) the original "Platinum Series" DVD in all categories by beefing up the A/V presentation and keeping all the extras intact. First-timers might want to give it a rent first, but previous owners should consider Cellular a decent upgrade for the asking price. Recommended!
2 people found this helpful

Joshua HReviewed in the United States on March 21, 2017
4.0 out of 5 stars
Hello.
Verified purchase
A good movie overall, what would you do if you answered the phone and someone needed your help in a life or death situation? Evan's character answers that by going out of his way to save a woman and her family when it seems no one else will.

Good film, great action and a good plot with some very good performances of which Jason Statham is a stand out as usual.
7 people found this helpful

John S.Reviewed in the United States on November 9, 2020
4.0 out of 5 stars
Good PG-13 movie
Verified purchase
Pretty good flick. Intense at times but that’s what makes it good. The story has been used with less effect in countless other movies. Definitely worth $1.99 rental. It’s getting harder and harder to find a good movie these days that doesn’t have a F-bomb every other word. It really is a shame that Hollywood can’t make a great movie without the filthy language anymore. Every once in a while you can find one like this movie although i wasn’t thrilled with some of the violence that was directed towards a woman. All in all it’s a good flick.

HappyLifeReviewed in the United States on November 28, 2020
3.0 out of 5 stars
Just 3.5 stars and dont expect to much
Verified purchase
Wow we usually love Jason Statham movies but this wasn't one of his best. He just acts a few minutes in this movie qnd acting is good but the acting from Kim Basinger is one of the worst I have ever seen. Not only was her voice annoying it actually really got on our nerves. Cheap acting like she doesn't even care.

Plot is okay but nothing new. An action comedy for a weekend night but glad I didn't pay for it.
One person found this helpful

California Girl - LMDReviewed in the United States on February 14, 2007
5.0 out of 5 stars
Not a sleeper!
Verified purchase
This is a fast paced movie from beginning to end. I think the only flaw was with the villains. I didn't find them "believable." So, either they were bad actors or badly directed. In contrast, Kim Basinger, William H. Macy, and Chris Evans were superb in their roles.

This was my first experience seeing Chris Evans in anything; that is, anything memorable for me to remember the actor. His athleticism, good looks, acting ability, and sense of humor were of five star caliber.

I felt that this was an excellent vehicle to show Kim Basinger's acting abilities beyond her roles in such popular movies as: "Batman," a James Bond thriller, and "9 and a 1/2 Weeks," etc. "Cellular" asked her to dig deep down inside herself, bringing out the true meaning of the word Actress. She was most believable.

William H. Macy once again proved there is no end to his talents. It was good to see him play a 'good guy,' unlike that which he played in "Fargo." He was excellent in his role as a radio announcer in "Seabiscuit." This time he needed to be more athletic as a cop. He did well at that, and left me with a feeling of comfort knowing he was on the job.
7 people found this helpful

Amazon CustomerReviewed in the United States on November 21, 2020
5.0 out of 5 stars
Kim Bassinger
Verified purchase
Watching this movie made me realize just how incredibly good Kim Bassinger is as an actress. Had really not given her much thought before. The movie itself is well written, it is able to maintain constant suspense without having to rely on the same tried on true methods that so many "suspense" movies use these days

Chris P. DecostanzaReviewed in the United States on May 25, 2010
4.0 out of 5 stars
This Disc Gives Blu-Ray High Definition Meaning !!!
Verified purchase
Cellular has been one of my favorite action films since it was released Sept.
of 2004. since getting my blu-ray player and 1080p high def digital t.v.
i've been waiting for it to come out on blu-ray. now quite recently i looked
on Amazon and didn't see it listed. but last week i looked again and it was
listed as actually being available. i ordered it and got it yesterday and watched
it last nite.

The intense crispness, clarity and sharpness of both the picture image and the
multi-channel audio tracks was mindblowing. exactly what you expect from a blu-ray
disc. but there are two flaws if you will.

1.its not the official U.S. release but a Canadian import. none of the extras
on the original dvd from New Line Cinema are included.

2.there isn't even a scene selection option and the film plays
automatically and when its over starts to play again. this seems
a strange way to burn a blu-ray disc.
2 people found this helpful
See all reviews
Back to top
Get to Know Us
Make Money with Us
Amazon Payment Products
Let Us Help You
EnglishChoose a language for shopping. United StatesChoose a country/region for shopping.
© 1996-2021, Amazon.com, Inc. or its affiliates