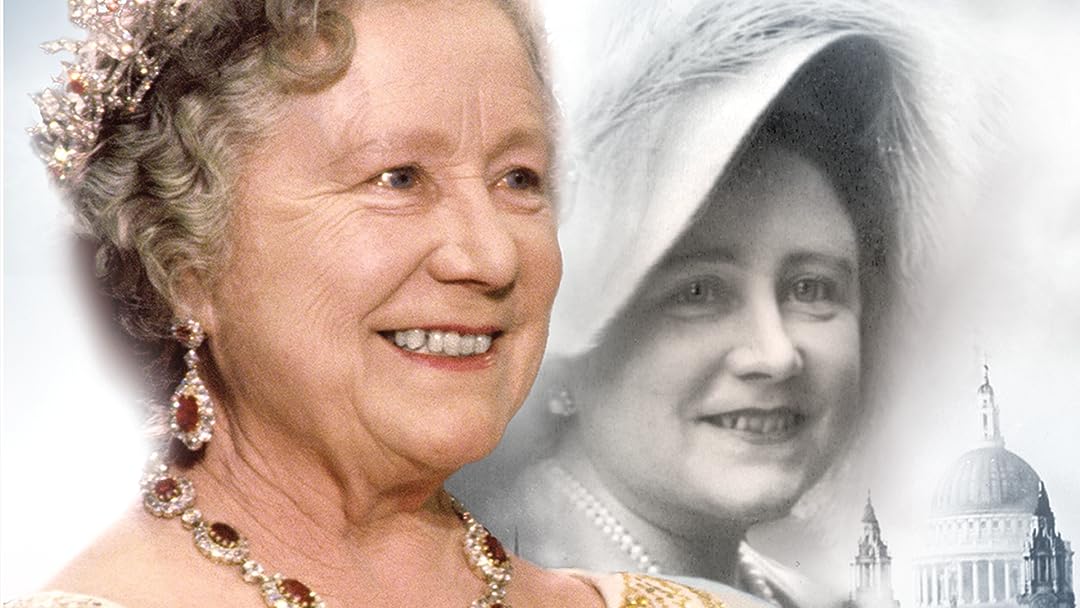 TrancelucenceReviewed in the United States on November 19, 2017
5.0 out of 5 stars
Info GALORE on the Royal Family
Verified purchase
I found this a little bizarre, but fascinating and informative. All about the royal family, with it's lynch pin, the Queen Mother (formerly "Queen Elizabeth", namesake of the QE1, wife of King George the VI, or Bertie of [[ASIN:B004R36QUE The King's Speech]], and mother of the current Queen Elizabeth, namesake of the QE2). This is ostensibly a biography of the Queen Mother, but it also details the stories of everyone close to her, i.e., the Royal Family for the last century- their proclivities, triumphs, scandals, etc. What is evident about this documentary is that some of it must've been taken from a documentary on fashion and the Royal Family, because the jewels, gowns, and especially wedding dresses of nearly every royal wedding in the last 100 years are discussed. Much is made of how the fashions reflected the times (for example, how the Queen Mother's HATS have evolved over the decades). The photos and film clips are wonderful and I found the discussion lively and very interesting.

Wonderful archival footage and interviews with people in the know. A LOT is crammed into 100 minutes. Though this will particularly tickle women's fancies, I think men who appreciate history and the historical record of the Royal's Family's participation in global affairs over the last 100 years will enjoy it too. I watched this to find out how Queen Mary was related to the present Queen, and to the QE1, the Queen Mary, and the QE2, and I learned that and a WHOLE lot more. Delves into the Queen Mother's personality in considerable depth- easy to see why she was so revered in Britain (a strong person, and quite a character). ***SPOILERS FOLLOW*** For example, she persuaded her husband the King to visit America at the start of WWII- the first Royal visit EVER to America (by ANY monarch, and in this case, by those from the country from which America won its independence, incredible. The Roosevelts served them hot dogs (!) and they and the King and Queen became friends as well as allies. This documentary includes archival footage of the Queen Mother meeting everyone from Errol Flynn to the Beatles (lots of footage of Princess/Queen Elizabeth too, from infancy on). Considerable detail on Prince Charles, who was very close to his Grandmother- his chief confidante and a kindred spirit, e.g., their shared favorite pastime was fly fishing. The film also suggests involvement by his grandmother in his choice of Diana (Diana's grandmother was her long-time lady-in-waiting), and later in his affair with Camilla, too. SCADS of information about the Royal Family from about 1900 on, beginning at the end of Queen Victoria's reign. Highly recommended!

mrep1943Reviewed in the United States on December 30, 2016
5.0 out of 5 stars
I highly recommend the movie
Verified purchase
In 1961 I was an exchange student working with the youth in Bristol. My organization was given the opportunity to meet the Queen Mother in the gardens at Clarence House. We formed in groups of six or seven and met her one on one. She was very interested in my home town of Crockett Texas. The Davy Crockett fad from the '50's was still around and she asked me a lot of questions about my town. She made me feel I was alone with her and no one else around. She won my 18 year old heart then and still has it.

The movie is very well done in portraying her as a lady of the people and the UK population accepted her as such. The Queen Mum was, in many ways, as instrumental as Winston Churchill leading England when they were alone and at bay during 1940-41.

I highly recommend the movie. There is so much history associated in it about a wonderful lady.

Andra GannolsReviewed in the United States on March 7, 2019
5.0 out of 5 stars
A Good Basid Bio + A Special Section on Royal Weddings
Verified purchase
Well worth watching, this overview of the life of Elizabeth the Queen Mother is not quite hagiography, nor full of scandal for scandal's sake. It does hold criticism of the Queen Mum, especially her extravagance, and seems both admiring and exasperated by her ability to ignore what she found unpleasant. If you liked William Shawcross's biography you will like this video.

Of special interest is a section in the middle about weddings within the Royal Family. Including an expert on royal weddings who is also an editor of Bride Magazine, this section seems out of place in a biography until you realize how very many weddings this lady must have attended throughout her lifetime! Though it includes more minor royals like the Gloucesters and the Kents (who are rarely covered), of the Queen Mum's grandchildren only Anne and Charles are covered here - odd that there is no mention of the marriages of Andrew and Edward, nor of Princess Margaret's children David and Sarah. If you are a royal watcher you will very much appreciate this part; if not, keep watching because it doesn't last forever.

Her death is not covered since this was made around her 100th birthday. And since it covers an entire century, don't expect it to delve at length into any one subject with the obvious exception of the Abdication. I might view it again at a later date to see if I missed anything. Recommended viewing.

A.
3 people found this helpful

AlexisReviewed in the United States on July 3, 2020
1.0 out of 5 stars
Queen Mother or Corrupt, Narcissitic Socialite
Verified purchase
I had a good view of the Queen Mother before I watched this documentary.

Now I see her as an elitist who was more concerned about having an extravagant lifestyle and
overpriced costumes and customs. Spending fortunes without any concern for debt;
protecting her position of power at any cost.

She was quite hateful and manipulative and wielded her power and influence to harm others; like Diana.

Yet had no problem in providing a castle for Camilla and Charles to pursue adultery.

Monarchy - Aristocracy is an outdated class of the overly privileged.
4 people found this helpful

SimpleGuyReviewed in the United States on October 8, 2021
5.0 out of 5 stars
A Lesson For Us All
Verified purchase
Regardless of your view of the pros or cons of the British Monarchy or certain individuals, this story, as well as the examples of Her Majesty The Queen, shows a good lesson for all of us...one of devotion to something. As The Queen said on her 21st birthday, she was devoted for her entire life whether long or short. Such was the case of the Queen Mother also. It may not be perfect but the lesson is there for us all.
One person found this helpful

Diane L. PootReviewed in the United States on December 12, 2016
5.0 out of 5 stars
She is what Brittan is made of!
Verified purchase
I think it told the story of the Queen Mother in a very honest and straight forward way. She didn't set out to be Queen and she was such a help mate to her husband and was his closest and probably fiercest ally. She was so brave and anyone that put Hitler's back up deserves congratulations and accolades for it!
8 people found this helpful

KittyReviewed in the United States on June 3, 2018
5.0 out of 5 stars
The Queen Mother
Verified purchase
Great story about Queen Mom. I heard Queen Mom and her husband, King George, didn't know what hot dogs are at the picnic in Hyde Park at the time they visited U.S. in June 1939 but President FDR did explaining what hot dogs are to them. It's a true hilarious story. Both Queen Mom and King George did try eating hot dogs for the first time. I am suggesting you should see the 2012 movie, Hyde Park on Hudson, that Bill Murray starred in.
3 people found this helpful

Amazon CustomerReviewed in the United States on October 27, 2021
4.0 out of 5 stars
Worth watching
Verified purchase
Those English love to gush over their Royals. I had to laugh at how they went on about how beautiful she was, and how everyone thought she was the greatest. Well by modern standards she was not beautiful and in reality was rather frumpy. With all that money you'd think she'd get her teeth cleaned. Of course they couldn't be too honest as she was still alive when this was filmed.
See all reviews
Back to top
Get to Know Us
Make Money with Us
Amazon Payment Products
Let Us Help You
EnglishChoose a language for shopping. United StatesChoose a country/region for shopping.
© 1996-2021, Amazon.com, Inc. or its affiliates