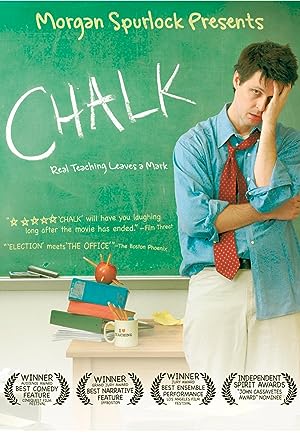 (80)
6.21 h 25 min2007PG-13
Chalk is a hilarious and spirited portrait of life in the trenches of that most honorable and frustrating profession...teaching.

A. N. O'NemusReviewed in the United States on August 8, 2018
4.0 out of 5 stars
Worth watching - politicians should have to....
Verified purchase
Worthwhile viewing - especially for parents. One of the few fairly realistic (mostly) portrayals of what it's like to be a teacher in US public schools - and the people depicted here even had it easy compared to many Of course, in a society that doesn't really care about education, where the rich separate their kids (and their money) into private education, and massive quantities of money are wasted, or spent on non-educational activities such as football, the situation's unlikely to prove any time soon. Changes in the system are mostly as effective as rearranging the deck chairs on Titanic after she hit the iceberg. Of course, George Shrub's "no child left behind" killed any form of creative education, and left an awful lot of children behind, especially minorities (but not the corporations making huge profits from test materials, or the rich kids who don't have to take them). Those comments are based on over 30 years teaching in L.A. and elsewhere, and if you don't like them, become a teacher............

S. KaufmanReviewed in the United States on September 8, 2018
2.0 out of 5 stars
Ehh...
Verified purchase
I think this movie kinda sucks. Really boring and not very funny. The characters are gloomy, boring and uninteresting, no wonder they are struggling as teachers!! As a film teacher I respect all film makers and their attempts, but on a professional level this is lame and slow with very little comedy. It is kind of a sad sad movie about struggling new teachers, and typical public school systems, which I guess could be insightful for some. But we all know this story already. I should have worked on my own lesson plans instead of wasting 2 hours of my afternoon watching this. Sorry, enjoy!

tvtv3Reviewed in the United States on April 28, 2008
5.0 out of 5 stars
A Snapshot Into What the Life of a High School Teacher Really Looks Like
Verified purchase
CHALK is a fake documentary that follows the school year of three teachers, with varying years of experience, and a first-year assistant principal at Harrison High School in Austin, Texas. The main characters are Mr. Stroope (Chris Mass) an overly confident third-year social studies teacher who is determined to be named "Teacher of the Year" before the year's end; Coach Webb (Janelle Schremmer) a determined, passionate, and sometimes pushy second-year P.E. teacher and volleyball coach who fights against stereotypes and is determined to change things and people, but won't change herself; Mrs. Reddell (Shannon Haragan) a former music teacher of five years who is now a new assistant principal after the former assistant principal was arrested and found guilty of criminal activities; and Mr. Lowrey (Troy Schremmer) a former business executive who left to corporate world to seek employment where he could make a difference in the world and is now a very anxious and nervous first-year history teacher.

CHALK is unlike any other film I have seen before about teaching. Most teaching movies revolve around one or a group of inspiring teachers who are shown changing the lives of their students, involves some hugely dramatic conflict, and wraps up nicely at the end with the teacher being acknowledged for the huge impact they have had upon their students. CHALK is not like that. The back of the DVD case describes being a "doc comedy style of THE OFFICE" but at a high school. That's a fairly accurate description of style of the movie. However, it's not very descriptive about what CHALK is really like. I am a high school teacher myself and in my opinion the film, though fictional, gives a fairly decent overview of what teaching is really like: the few highs, the miserable lows, and the huge amount of frustration and inadequacy of each day. There's a mixture of excitement and drama, comedy, lots of frustration, and just the right about of boredom and tedium. The film probably won't inspire anyone to enter the profession, but it does provide a nice glimpse into the life of a high school teacher.

There are some discrepancies in the movie and between real teaching. For example, the classes seen in the movie are much too small than the typical high school classroom and there is no mention about testing and the impact that has and is having on changing the typical day in a high school. Still, the movie does a better job than any other teaching film about what teaching is really like. Mike Akel and Chris Mass are the "writers" of the film and Akel's also is the director, and Mass is one of the stars as Mr. Stroope. Both of these men were former teachers themselves and I believe their experiences are what grounds the movie (mostly) in reality. The film was made for around $10,000 and much of the script was improvised around an outline provided by Akel and Mass. The result is exceptional and is a movie I think that everyone could benefit from watching, though not necessarily enjoying.

It should be noted that though all of the acting in the film is exceptional, there are some standout performances. The first is that of the students. The students in the movie are real life students, many who had either Mr. Akel's or Mr. Mass as their teacher, and gave up most of their summer to not be paid so they could be in the movie. Their actions and dialogue are real and add to the grounded feeling of the film; they are just being themselves which is what much of the greatest acting ever performed really is. The other standout performance in the film is that of Troy Schemmer who performs Mr. Lowrey. Schemmer does an excellent job of capturing all the quirks and idiosyncrasies of a nervous, first-year teacher who is just trying to make a difference in the world and share a passion of his for those younger than he. Lowrey is the heart and soul of the movie and the story, though seemingly not intentionally, revolves around him. For example, the film opens with the statement that "50% of all teachers quit within the first three years," and it ends with an ambiguous scene of Mr. Lowrey packing his things away for the summer, leaving the audience to guess for themselves if he returns or leaves and joins the ranks of the statistics.

CHALK is an A film that everyone should see at least once. Teachers will love it because it is so real and filmmakers should watch it because it illustrates that a huge budget isn't necessary to make a great movie as long as there is a solid story and script.

The DVD includes a commentary with Chris Mass, Mike Akel, and Morgan Spurlock; essays from the cast and crew about their favorite teachers; two mock Harrison High School PSAs; a featurette entitled "The Chalk Journey" about how the movie came to open in New York as a feature; a playful short film with characters from the cast entitled BROKEN DREAMS; and the extended trailer for the movie.

K. R.Reviewed in the United States on August 16, 2020
5.0 out of 5 stars
A little too much on the nose..
Verified purchase
Anyone in education will recognize the situations that happen in this movie. A bit exaggerated - but now by much. Think of the TV show 'The Office' but set in a public high school. It's going to be a film that someone with a select type of sense of humor will enjoy.

LEAReviewed in the United States on March 4, 2014
5.0 out of 5 stars
EVERY TEACHER NEEDS TO SEE!
Verified purchase
It's obvious that this screenplay was written by teachers and comically addresses the pitfalls and foibles of the education profession. Low-budget and set in Austin, much of this movie (such as the staff lunch scenes) is ad-libbed as well. So funny, though it sometimes hits too close to home! As a veteran teacher, it gave me an opportunity to laugh at some of the more frustrating aspects of my job.
One person found this helpful

R.AMSEYReviewed in the United States on January 1, 2011
2.0 out of 5 stars
Funny parts - but it sure isn't as funny as some reviewed here
Verified purchase
No I'm not a teacher or engineer as someone else here stated - as if this would help the movie be more funny. Yes in the first half of the movie it tries to convey "teachers are people too", but once you get that picture the movie is coasting down hill without gaining momentum. You can only laugh at a dim-wit teacher who is as un-comfortable being a teacher as he is being a man so often. The the a-typical female gym teacher who is NOT gay but has issues too is also thrown in. But for me if the movie took each teachers personality and gave it more depth as the movie went forward there would be reason to finish watching it. Overall once you get the first couple laughs it just vomits the same thing up over and over again leaving that kind of acid taste in your mouth - like one more time is one more time too many. At least it was only 99 cents and 45 min spent on this movie that had way more potential than it delivered.

PhoenixFireskyReviewed in the United States on December 5, 2008
3.0 out of 5 stars
Should be called "Deception"
Verified purchase
When I rented Chalk, I thought it was a real documentary. If I'd known that it wasn't, I wouldn't have wasted my time. As it was, I got halfway through it, then started reading the reviews and realized that it was fake. Now I'm out the money for the rental - just because Amazon's description didn't say that it was fiction. Generally, I like Amazon, but this time I'm not pleased at all. And why is "documentary" the first suggested tag description if it's not actually a documentary? Very confusing.

As far as the movie itself goes, I guess it's not totally awful. I was really interested until I found out that it was fiction. But the level of drama and such isn't what I'd expect from something scripted, so I'm only giving it a few stars - and I don't expect to finish watching it.

BuffaloMALReviewed in the United States on October 11, 2009
4.0 out of 5 stars
Great Surprise
Verified purchase
This is a very entertaining movie. It is like "The Office" meets teaching. Some scenes were so real it seemed like I was really watching teachers and students in a classroom. I really enjoyed it. And I even bought a second one to give to my daughter, who is a teacher.
See all reviews
Back to top
Get to Know Us
Make Money with Us
Amazon Payment Products
Let Us Help You
EnglishChoose a language for shopping. United StatesChoose a country/region for shopping.
© 1996-2021, Amazon.com, Inc. or its affiliates