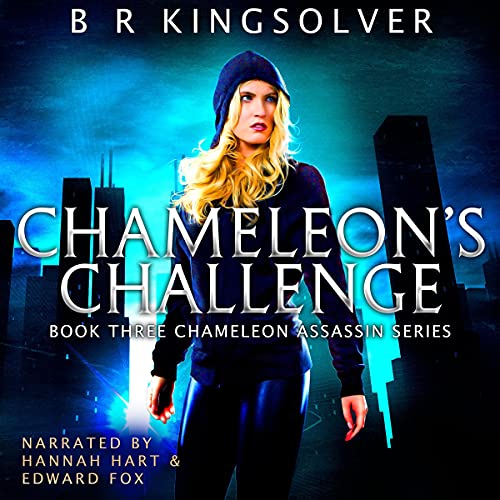 List Price: $19.95
You Save: $6.96 (35%)
By completing your purchase, you agree to Audible’s Conditions Of Use
Sold and delivered by Audible, an Amazon company
Share

4.5 out of 5 stars
4.5 out of 5
199 global ratings
How are ratings calculated?
To calculate the overall star rating and percentage breakdown by star, we don’t use a simple average. Instead, our system considers things like how recent a review is and if the reviewer bought the item on Amazon. It also analyzes reviews to verify trustworthiness.
Top reviews

Maglama
4.0 out of 5 stars Somewhat violent and gruesome if this is not to your taste
Reviewed in the United States on May 31, 2021
Verified Purchase
Corporate intrigue and establishment of mutant rights are still main focus of storyline. Author is still providing a great deal of misdirection, story is still packed with plenty of action, and male characters at all levels are still somewhat clueless. The only ones that seem to be smarter than average are the villains. Spoiler alert, but although the early focus of the book seems to imply there is only one villain, once he was identified I surmised he had a partner and guessed who it was and their goal. As a result this book did not hold any surprises. Was also very violent in effort to paint the picture of the psychopath who is main villain in this storyline. Not my favorite book in the series, but Libby still stands out as the most intuitive character. Each book is a standalone story and so far not best book in this series.
Read more
Helpful
Report abuse

Amazon Customer
4.0 out of 5 stars An Enjoyable Read
Reviewed in the United States on August 6, 2018
Verified Purchase
I am very glad to be able to write a positive review, as I had hoped to. I enjoy the writing and humor of the series, which is well-balanced with the darker details (in my opinion). The gore also isn't as sensationalized as other writers can tend to be; rather than describing the crime scenes in gruesome detail, we get snippets of details and the characters' reactions, which I appreciate. I had hoped to learn a little more in the ending about the other chameleon's mutation (how long they were aware they had it, could they use it the same way Libby does, etc), and a little disappointed that Libby didn't pick up on something seemingly obvious, but that's only natural; it's much easier to put the clues together when you aren't in the situation, and I put my clues together in a not-quite-wrong, not-quite-right fashion. There were a few spelling errors I noticed ("grabbying a scarf", "Richard's expression became more solumn"), but nothing that would prevent understanding.

(Original review below)
Firstly, I must preface this review with the statement that I am enjoying the series. I wouldn't be trying to read this one if I didn't.

However, I am unable to read it. Every time I purchase this eBook, the contents are that of the second book. I have, as you may be able to guess from my preceding sentence, returned and re-purchased this eBook several times since November 2017. I even reported the issue to customer service in May 2018, but the situation has not changed. I do not know why this issue would be so selective and persistent (only one other review mentions the same issue I am having, and the lovely author replied that the issue is fixed in March), but it is maddening.

I do hope that this issue gets fixed, and I can replace this review with an actual, hopefully positive one.
Read more
One person found this helpful
Helpful
Report abuse

K. M. Dorsey
3.0 out of 5 stars Libby seems to be a trouble magnet
Reviewed in the United States on June 7, 2021
Verified Purchase
After a vacation with one of her best friends, Libby comes back to town to discover a serial killer. Since they strike a little too close to home she provides protection detail for her friend. She also acts as a liaison putting her in contact with her almost hot flame.
Read more
Helpful
Report abuse

Svetlana Shavez
5.0 out of 5 stars I've love all 3 books in this series
Reviewed in the United States on February 26, 2018
Verified Purchase
I've love all 3 books in this series. The main character, Libby, is very realistic, smart, capable, caring and professional woman with a some super power (not overwhelming). The book packed with a little bit of everything: love, sex, action and suspense mix with some science fiction. Great easy and entertaining reading.
Read more
One person found this helpful
Helpful
Report abuse

Kindle Customer
5.0 out of 5 stars Great urban adventure!
Reviewed in the United States on April 5, 2020
Verified Purchase
These books are exciting and well plotted, with good characterization of both good guys and the villains. The post-apocalyptic world building is top notch too.
Read more
One person found this helpful
Helpful
Report abuse

Dena
5.0 out of 5 stars Excellent!
Reviewed in the United States on November 14, 2020
Verified Purchase
I am so enjoying this series, sometimes the books go down the longer the story goes on but every book is awesome.
Read more
One person found this helpful
Helpful
Report abuse

Jim Phillips
5.0 out of 5 stars Worth the money
Reviewed in the United States on June 12, 2020
Verified Purchase
Very interesting subject matter and I definitely enthralled with the story. Had to buy the entire series. Though I do wish the book was sized smaller.
Read more
One person found this helpful
Helpful
Report abuse

Paulette
5.0 out of 5 stars Characters with believability
Reviewed in the United States on June 17, 2017
Verified Purchase
Love this series. I cannot wait for the twists and turns of the next book. I enjoy the characters; they have very believable layers although some are much more shallow then others.
Read more
2 people found this helpful
Helpful
Report abuse
See all reviews

Kass
5.0 out of 5 stars Love this series
Reviewed in Australia on November 23, 2017
Verified Purchase
I bought the first book in this series on a random rec in a FB group I’m part of and immediately bought the next two straight after. Now impatiently waiting on book 4!! Tells you how good it is! I do hope we get some more romance in the next one though!
Read more
Report abuse

ScottW
5.0 out of 5 stars Great series
Reviewed in Australia on June 23, 2017
Verified Purchase
This series is a great read. Engaging characters in an interesting version of future Earth. The characters both minor and major are well crafted to support each other and the storyline. Well worth a read. Bring on book 4!!
Read more
Report abuse
See all reviews
Back to top
Get to Know Us
Make Money with Us
Amazon Payment Products
Let Us Help You
EnglishChoose a language for shopping. United StatesChoose a country/region for shopping.
© 1996-2021, Amazon.com, Inc. or its affiliates