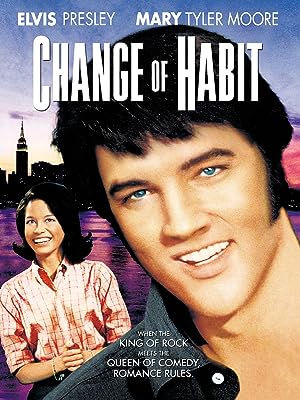 (1,123)6.01 h 32 min1969G
Laughter, romance and rockin' good times are just what the doctor ordered as Elvis plays an inner-city M.D. who falls for social worker Mary Tyler Moore. But this guitar-strumming doc will be playing a different tune when he discovers his would-be girlfriend isn't who - or what - she seems to be!

Readin' and Rockin'Reviewed in the United States on March 4, 2019
4.0 out of 5 stars
Fun, strange, historic little film
Verified purchase
This was Elvis Presley's final non-documentary film. That alone makes it worth owning for any 20th century popular culture enthusiast.

As for the content, it's a trip. Mary Tyler Moore, Barbara McNair and one more actress play nuns out of their habits and plunged into the inner city. They sign on as nurses for a young, idealistic doctor who looks and sounds a heckuva lot like Elvis Presley, who turns in a very good but uninspired acting performance. The director's name in this picture featuring religion is Billy Graham. No foolin'!

It has the feel of a TV Movie of the Week, and that's generally how it plays today. Very easygoing social consciousness drama with a bit of music and the strange, unintentionally comic situation of Elvis falling for a nun, and she for him. Elvis looked stunningly fine in 1969 and one realizes that Sister Mary has a difficult choice to make.

The only drawback is the still disturbing "rage reduction" sequence with an unknown child actress named Lorena Kirk, in her only acting role, before or since. The scene prompted Moore to call her husband to the set to see if this was even legal. At the time, an M.D. was pushing his pet treatment for autism, which has been totally discredited and not permitted in many states in the decades to come after this film was made. Elvis was coached by the M.D. and encouraged by Billy Graham to do the scene as instructed. It's still rather chilling.

Beyond that, it's an earnest and amiable film about urban life in America in the latter half of the 20th century in the turbulent late1960s. A word of caution, though: there is R-rated language thrown around and a genuinely frightening rape scene.

The songs are a cut above most previous 1960s Elvis Presley movie music. In one scene he jams with The Blossoms vocal group featuring the legendary Darlene Love.

It's in DVD standard definition, but seems to upscale quite well on a Blu-ray player.

Phil SilvermanReviewed in the United States on February 26, 2017
4.0 out of 5 stars
Dated but well done . Strong Elvis .
Verified purchase
3.5*
This very credible albeit low budget little drama had a very slow start in 1970. This fan , buying his new records at the time , was unaware it was even released! It's been written it had no distribution in England .
The excitement of the 1968 TV special , new million sellers , and a grand *stage * comeback in Las Vegas , made this seem small potatos .
Too bad so many people missed the chance to watch Elvis "do it right ", act and sing occasionally , not every 9 minutes .
The "ghetto Doctor" coincided somewhat with his 1969 million seller "in the ghetto" and too bad this element went straight to the ether , as well.
Nice to watch Mary Tyler Moore and ed asner in a flick made just before the legendary Mary Tyler Moore series began . Ed played w Elvis as far back as 1961 and that is another cool backstory .
The socially conscious movie itself is very dated and has some embarrassing stereotypes but at the time was fairly consistent with many new hip tv shows and movies . Hollywood , now going on "fumes", as the independents were about to run the show, delivered some entertaining and relevant pieces and Change of Habit , stands proudly alongside .
I think it should have been presented as a "Made for TV" and it would have guy in that continuum mentioned above . Should have been Comeback TV Special, Comeback Movie, Comeback on Stage.
Elvis did his most *acting* since Follow That Dream , Wild in the Country, Flaming Star , and he is fully convincing .
A little sad for the fans that Moore panned the movie.
Casual fans will also want to sit through the whole movie - not the usual situation .
Note: unlisted song is "lawdy, miss clawdy" , an instrumental played live by Elvis!
5 people found this helpful

HippieFlowerChildReviewed in the United States on September 29, 2021
5.0 out of 5 stars
Change of Habit Movie Review 🎥
Verified purchase
I liked everything about this movie. Being an Elvis fan since I was 14, I enjoyed his movies as well as his music. The movie grabs your attention. Sister's Michelle, Barbara and Irene are not afraid of anything, and made a bad neighborhood come together. I did admire that some patients in the clinic were given the help they needed, especially the little girl Amanda. Desiree looked stunning in Michelle's navy blue dress; it made her feel really happy. Did I see Father Gibbons smile slightly at the end of the movie? Loved it. Love the songs in the movie, it was a real treat. Excellent movie that I will watch again and again. Highly recommend this movie.

Elvis Plays a doctor in a free clinic in Chicago. He was coming off his "68' Comeback Special" and in the best shape of his life and in a good mood. You can feel that with his performance in this one. Mary Tyler Moore co-stars as a nun who, with 2 of her "sisters" goes undercover in the poor district to better help the people there. Elvis and Mary have a good connection but Elvis doesn't know she is a nun so he becomes interested in her. The other part of the plot . . . There is a loan shark that many of the poor people are in debt to which puts them in danger.

There are a few songs in this one but not like the usual "musicals" Elvis was in. Very entertaining movie with good acting and decent plot. Ed Asner also has a roll in this and this movie precedes "The Mary Tyler Moore Show" which put them together on the small screen.
11 people found this helpful

R&JReviewed in the United States on July 5, 2020
5.0 out of 5 stars
Best Elvis Movie Ever
Verified purchase
This is my favorite Elvis movie. Mary Tyler Moore plays a Nun who with 2 of her "Sisters" go to work at a clinic that is operated by a Doctor played by Elvis. Mary Tyler Moore's character's life becomes complicated when she must choose between making her final vows or the love of a man. This movie introduced me to the song Rubbernecking which is my favorite song!
3 people found this helpful

birdwatcherReviewed in the United States on February 4, 2017
4.0 out of 5 stars
Cute but not too accurate for Catholicism
Verified purchase
Nice Elvis film, good Mary Tyler Moore too. Surprised by skimpy outfits, adult themes, etc. with the G rating. Touches on some issues of social justice, racial prejudices, and mental illness and autism. Surprising coverage in a seemingly light hearted showcase for Elvis and music. Don't look for accuracy in the celebration of the Mass though. Some of the rules for Mass are not negotiable (well they aren't supposed to be anyway - you get renegades in any "arena" and the Church is certainly no exception).
5 people found this helpful

Lela SoulierReviewed in the United States on September 22, 2013
4.0 out of 5 stars
Kitsch aside, this film really does have deeper meaning
Verified purchase
I first saw this film at the age of 12, in the age of Dialing for Dollars (Janis Joplin, anyone?) Strangely enough, "Elvis Week" played before Elvis was dead. The Beatles were the week before. I fell in love with both.

I am now pushing 50 and I still love my Beatles and Elvis movies. I must have seen "Change of Habit" 50 times since I was a kid, and the more I see it, the better I like it. It is true some parts are ridiculous, including my pet beef that the nuns are wearing make-up, specifically eye-shadow, in the convent, prior to being "released" into the general population. I consider criticisms such as this "chump change" -- the kind of thing I can accept as long as the "premise" of the movie is reliable.

Serious critics can pick apart many "credibility" moments in this movie. Much might appear "dated." But for me, I look for the "soul" of the movie; the serious intent of the characters -- and the actors behind the characters -- who put their soul into this movie to put forth ideals in ways they were not allowed in their mainstream professional lives.

Elvis (privately) rated this one of the best movies he'd ever done, but, because it was his last movie and was not backed by a soundtrack, was considered by Col. Parker a failure, and therefore did not "exist" as a record of accomplishment financially or through social impact. People who "study" Elvis know he never cared about the "bottom line" dollar-wise; he always cared about people. In this movie, it shows.

Lastly, and this may be a "technical" point, but this is the only movie I've ever seen that even remotely deals with what was called the Ecumenical Movement. I am not Catholic, or religious, but it seems to be that this movie takes on even a sliver of social and human rights issues that were taking place in the late 1960s that really weren't addressed at all until prior to the turn of the century, and is poised to be an issue under the current Papal administration, as I write this.

This movie is not for everybody. Some people would say that "only people who love Elvis would care about this movie." I can honestly say I never cared about Elvis until I saw this movie.
11 people found this helpful

Carl E. ShieldsReviewed in the United States on March 6, 2016
4.0 out of 5 stars
Rated G?!? One of Elvis' better performances. He seems more natural and he seems ...
Verified purchase
One of Elvis' better performances. He seems more natural and he seems to be caring and not walking through it. Plus he looks great. A great look at what might have been if he had continued making movies. A great job overall.
The only thing I find strange is how this movie got a G rating from the MPAA. I guess the ratings board figured that it's an Elvis movie and slapped a G rating on it without watching it. Even by 2016's standards it would receive a PG-13 rating. Just a warning for any younger viewers.
6 people found this helpful
See all reviews
Back to top
Get to Know Us
Make Money with Us
Amazon Payment Products
Let Us Help You
EnglishChoose a language for shopping. United StatesChoose a country/region for shopping.
© 1996-2021, Amazon.com, Inc. or its affiliates