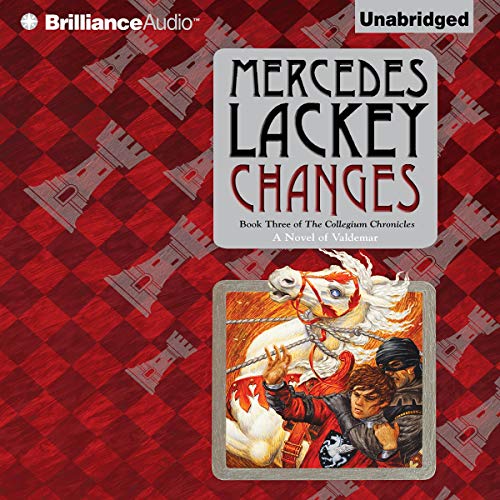 4.7 out of 5 stars
4.7 out of 5
583 global ratings
How are ratings calculated?
To calculate the overall star rating and percentage breakdown by star, we don’t use a simple average. Instead, our system considers things like how recent a review is and if the reviewer bought the item on Amazon. It also analyzes reviews to verify trustworthiness.
Top reviews

Cynthia H. Grossman
5.0 out of 5 stars Valdemar
Reviewed in the United States on May 3, 2020
Verified Purchase
Though Mags background of unimaginable poverty and abuse set him apart from most other trainees, nonetheless he had found his own special group of friends: Bear, Lena, and Amily (daughter of the King's Own Herald)--all students whose situations in life set them apart from more usual trainees.
Because of Mags' friendship with Amily, he met Nikolas who recognized the same traits in Mags that his Companion, Rolan, had recognized in him. Nikolas begins training Mags to be a spy.
Mags and Nikolas learn that there are dangerous, mysterious agents in Haven--agents who sought to bring down the kingdom.
The agents also want Mags.
A very good story.
Read more
Helpful
Report abuse

FairyQueenDani / DaniMom22
5.0 out of 5 stars Well What A Ride!
Reviewed in the United States on April 7, 2021
Verified Purchase
My title says it all what a ride!
This series just keeps you wanting to read the next page. Mags's back story is heart wrenching and encompassing.
It really makes you feel for this character, to the point to where you really want to continue
to find out what's going on in his life and those around him.
Mercedes has a way of creating characters and story lines that completely engross you.
I'm starting the next book now!
Read more
Helpful
Report abuse

AlyCat
5.0 out of 5 stars An Exciting Continuation
Reviewed in the United States on January 6, 2017
Verified Purchase
If you enjoyed the first and second books of the collegium series Foundations and Intrigues you will enjoy this continuation of Mags' journey. Settled in to his life at the Collegium, Mags continues to ferrite out the mystery of his origins and the weapon like assassins that have been stalking Haven. All of the favorites from the earlier books are still with us and they are growing up. In this chapter of the story, Mags is in his first test as a spy under the tutelage of Herald Nikolas. His courtship of Amily continues and she has her own character arc development that giver her more depth and we understand her more as the book progresses. The pace is steady and the action is satisfying. You get enough teaser of the mysteries of previous books to keep reading, but no conclusions so you are guaranteed to read the fourth book.
Read more
Helpful
Report abuse

Kim Deister
4.0 out of 5 stars Good read
Reviewed in the United States on October 27, 2015
Verified Purchase
Although I love the Valdemar saga, one of my favorite series that I go back to over and over again, I have to admit that this this installment of the Collegium Chronicles is my least favorite thus far. I still love Mags, as well his friends Lena and Bear, but this particular book dragged for me. Although his quest to find answers about his past was the focus of the novel, I think I enjoyed the stories of Lena and Bear and other characters more. Their stories had much more of an arc to them, whereas the main point of Mags' storyline was simply a carry-over from the previous novel.

The other thing that dampened my enjoyment was Mags' dialogue. This is the third book into the series and, if anything, his accent was worse. And that made reading difficult sometimes as I had to stop to puzzle out exactly what it was that he was saying. I understand the point behind the accent, but it was almost unreadable at times

My Recommendation: While this is not my favorite book in the series, I still feel that it is an importa part of the saga as hold. It is also a necessary read for the next two in the series.
Read more
One person found this helpful
Helpful
Report abuse

Aerin
4.0 out of 5 stars Transitions
Reviewed in the United States on March 21, 2012
Verified Purchase
While I have some real problems with this book, I cannot agree with the one and two star reviews either. However, I have the benefit of knowing that this is not the end book of a series; if it had been, I would have been bitterly disappointed.

The book is better than the first two with some of the mysteries being, at least partially, solved and others remaining for the future. The solutions do not necessarily result in happy ever after endings but provide realistic resolutions to the problems involved. Sadly, we see less and less of the Collegium and more of the city of Haven.

There are, however, some matters that keep this from being on a par with earlier works by this author. 1) The matter of Bard Marchand is handled almost as an afterthought, as if the author was just tired of him and decided to make an end. There really is not sufficient explanation of his motivation in the actions he took (I am trying not to spoil this book for those who have not read it). 2) Mags' age? Mags was 11 or 12 when he was chosen. We have his own word for the fact that he had not yet reached puberty. He came to the collegium in the fall and the unusually cold winter started at the beginning of that book. The second book covered the balance of that winter and into spring. For the most part, we see Mags as an exceptionally mature young boy throughout. The third book starts with the exceptionally hot summer that follows so Mags should be about 12 or 13, maybe 14, at a stretch. But he is now acting and is being treated as if he were 17 or 18. The romance with Amilly is between young adults and not children and Amilly's father is treating Mags as an approved suitor. Ridiculous. 3) Mags' accent. When he came to the collegium, Max spoke with an uneducated accent and vocabulary. Perfectly natural, but it should be something the collegium is seeking to train him out of, not tacitly condoning. He should be required to use proper diction and vocabulary just to give him much needed practice in using the language properly. Heralds are required to interact with the nobility, to act as judges and to represent the crown. Failure to speak well will be a handicap when he becomes a young man but nobody seems to be doing anything about it.

In the end, I have given it four stars but I think there is a decline in quality overall.

For the rest, the book was fair and I am looking forward to the next - final? - volume.
Read more
6 people found this helpful
Helpful
Report abuse
See all reviews

Amazon Customer
2.0 out of 5 stars Disapointed
Reviewed in the United Kingdom on October 10, 2011
Verified Purchase
I've been waiting for this for ages, and have had it on pre order as a huge fan of the Valdemar series. I settled down with it Friday afternoon, looking forwards to a good read and finding out what happened next...
I finished the book and went back and reread the last few chapters sure I must have missed soemthing, the book leaves so many questions unanswered, and it felt a rushed in places and in others scraped to thin.... if theres not a fourth part to this mini series in Valdemar I am going to feel I have been cheated.
All in all definitely not the best of the lot, and really rather disapointing :-(
Read more
20 people found this helpful
Report abuse

nogginthenog
4.0 out of 5 stars Shocking
Reviewed in the United Kingdom on December 10, 2012
Verified Purchase
It's an easy and enjoyable enough read.
But the publishers should be ashamed of themselves.
The proofreading is shocking - pretty well non-existent. Typos left, right and centre - and I am not exaggerating. In places sentences are run together making it difficult to understand who is talking to who, misspellings abound, speach marks are misplaced ... and on and on. Having paid full price for this book I am both appalled by the shoddy production standards and annoyed at having coughed up the dosh for such poor workmanship.
Read more
2 people found this helpful
Report abuse

J Webb
4.0 out of 5 stars Good read.
Reviewed in the United Kingdom on June 24, 2017
Verified Purchase
Another triumph for the author. Just like the rest of the series. Only reason I've not rated 5* is that the publisher has yet again failed the author by employing sub-standard proof readers. Not many mistakes but highly noticeable due to the fact that the books can now be edited after publication.
Read more
Report abuse

Rbooth
3.0 out of 5 stars Not her greatest
Reviewed in the United Kingdom on April 25, 2014
Verified Purchase
I have stuck with this series for a 3 books and this one just tipped me over the edge of not reading book 4, although I HATE not finishing series. It is ok, reasonably entertaining but not even in the same planet as her original Valdemar series.
Read more
One person found this helpful
Report abuse

J'net Stapleton
5.0 out of 5 stars Great Series! Great Book!
Reviewed in the United Kingdom on March 13, 2018
Verified Purchase
I'm loving this book series! Great book! Great price!
Read more
Report abuse
See all reviews
Back to top
Get to Know Us
Make Money with Us
Amazon Payment Products
Let Us Help You
EnglishChoose a language for shopping. United StatesChoose a country/region for shopping.
© 1996-2021, Amazon.com, Inc. or its affiliates