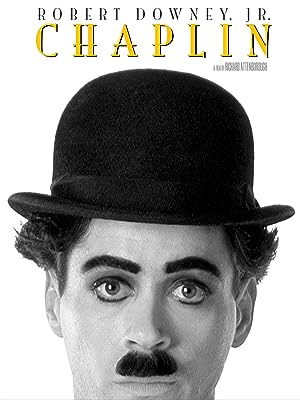 (1,577)
7.52 h 24 min1992X-RayPG-13
The biography of Charlie Chaplin, filmmaker extraordinaire. From his formative years in England to his highest successes in America, Charlie's life, work, and loves are followed.

archangel1911a1Reviewed in the United States on April 24, 2017
5.0 out of 5 stars
DOWNY DEFINES ACTING, DIANNE LANE STOPS THE HEART WITH HER BEAUTY
Verified purchase
I consistently defy anyone to name a better performance than Downey Jr., in this film. I don't know whether it was his personal history, or simply the lack of ability among members of the Academy to recognize timeless art, that robbed him of his Oscar.
.
I wrote this review especially to say that I have been in love with Dianne Lane all my life, and I do not know of a moment in any film where her beauty has been so raw, and so powerful. In later years, Lane has become a greatly respected actress, but at this time she was still very, very young. She has never lost a single photon of her radiance, and I find her as stunning today, playing the elderly mother of Superman, as I did all these years ago. She is a walking and breathing Halleluiah to the spirit of eternal and incandescent loveliness.
.
If you have not seen this film, I truly envy you.
.
A final note:
.
Before you watch this, find "The Gold Rush", first, and then "The Great Dictator", and invest a bit of time In watching Hollywood's "greatest ballet artist" do his dance, in anticipation of watching the story of his life. Before the words "that stuff is OLD" can come out of your mouth, you will be laughing too hard to say them. And, perhaps crying,
.
You will thank me, I think, for knowing Charlie a little more personally, when you come to his own story.

James SparksReviewed in the United States on October 4, 2018
5.0 out of 5 stars
A Fantastic Movie
Verified purchase
Chaplin is a biopic movie that tells the story of the life of Charlie Chaplin. I'm not aware of another movie that attempts to capture Charlie's life, and this one does an excellent job.
What I loved:
Robert Downey Jr.- This was a dark time in Downey's life. He struggled with addictions during this season of his life, but his acting during this time is worthy of the 5 stars by itself. Downey captures the mannerisms of the tramp, and the personality of the man. He was nominated for an Oscar and he won the BAFTA for the role.

The other Actors- I don't think I would have changed a single cast member of the movie(Maybe Hoover). The Ensemble was great with standout performances by Dan Ackroyd, Diane Lane, and especially Kevin Kline.

Makeup and costuming: I loved the style of the period in which Chaplin was making movies, and this movie did a good job at showing it in an accurate way. I also rather enjoyed the portrayal of the movie industry in these early days as well as Southern California.

Richard Attenborough: When I think of Richard I think of him as an actor, but honestly he may have contributed more to Cinema as a producer and director. This is one of many great movies he made, and he did a great job.

Some have argued that the movie was set up to fail, because one movie could not possibly capture the larger than life person of Chaplin. I agree to a point that if that was the goal, then it would have been better suited as a mini-series. But I think the goal was to introduce to the life of "The Tramp", which it did very well, and gave me a renewed desire to know more about him.

Brent GrahamReviewed in the United States on April 18, 2017
5.0 out of 5 stars
Compelling and Stunning!
Verified purchase
A glorious film about a glorious career. A flawed man lived a life all of us yearn for: one that made a difference in people's lives. Brilliantly directed by Richard Attenborough, Chaplin is brought to life through a stunning performance by Robert Downey Jr. I love the fact Chaplin found his soulmate late in life, something he called "the happiest event of his life" - true love transcends time.

How it is this movie is not more well known is a mystery to me. Do yourself a favor and immerse yourself in "Chaplin".
21 people found this helpful

D. CRAMReviewed in the United States on May 18, 2018
4.0 out of 5 stars
Good, but could have been better
Verified purchase
Chaplin is IMO the only great maker of films who was involved in every aspect, writing, acting, directing, creating the musical scores for such simplified intellectual classics as Modern Times and The Great Dictator. Even his early slapstick remains a trademark in world culture while too many silent films have not. I somehow completely missed this Attenborough biographical movie growing up and I have a mixed impression. Despite the colorful cast, the film is too short and ends up introducing many scenes of Chaplin's life without really going very far into them. Too much is taken for granted and based on the assumption that you know who certain icons were. This might work for someone who is still alive, in an era still current, but Chaplin's legacy remains in his films and the times in which he lived are detached from most modern takers. I guess today they would have made it a series on some isolated digital platform (and probably would have taken too many liberties with cliche and fallen flat as well). It's too bad that more hasn't been said on Chaplin, but at least we have this great 1993 attempt, which is probably as good as it gets.
8 people found this helpful

Chaplin (1992) is Richard Attenborough's impressive attempt at depicting the magnificent and fascinating life of Charlie Chaplin. Attenborough captures a great deal of tragedy, drama, intrigue, scandal, romance, and insight into Chaplin's chaotic life. Chaplin works so well due to Attenborough not shying away from the more controversial aspects to Charlie's existence, especially his penchant for young girls. Chaplin captures the magic of filmmaking with the unrestrained madness of a creative genius.

Attenborough goes to staggering lengths to recreate England and America in the 1900's through the 1970's with a careful eye to detail. The costumes, make-up, accents, fashion, and politics are all front and center. Attenborough uses far wide shots for epic grandeur of a studio scene to intimate close ups of Robert Downey, Jr.'s face for emotional volatility. He is a master director as Attenborough already proved with his 1982 biopic for Gandhi and he captures similar excitement and expressiveness with Chaplin.

Speaking of Robert Downey, Jr., I think that Downey gave his greatest acting performance ever as Charlie Chaplin. His career is significant on his own merits from Zodiac to Iron Man, but Chaplin sees Downey in his prime. He kills his English accent with an effortless realism. Downey's fluid dancing and drunken movements at The Tramp character are delightful. His own manic delivery and deep forlorn speech as Chaplin give the man a verbal gravitas. Downey is highly sympathetic, but never goes overboard for such a larger than life figure. Downey is the reason why Chaplin resonated so deeply with me as a movie goer, film critic, and cinema fan. He is as funny and poignant as ever as the tragic hero Charlie Chaplin.

I must mention the several excellent supporting roles in Chaplin. Anthony Hopkins is curious and reverential as Chaplin's imagined editor and confidant George Hayden. Kevin Kline is exhilarating and charming as the legendary swashbuckler and friend to Chaplin named Douglas Fairbanks. Geraldine Chaplin is wondrous as her own grandmother Hannah Chaplin. She enchants you with her tender beauty and breaks your heart with a heartfelt and disturbing performance of insanity. Chaplin did her family proud as she is superb actress. Lastly, Moira Kelly is fantastic as Chaplin's first love and inspirational muse Hetty Kelly as well as his eternal love interest Oona O'Neill, respectively.

In all, Chaplin may inform you more about the life of Charlie Chaplin than you likely knew, but excels in its depiction of his tumultuous life. His radical ideas and innovative direction are inspiring alongside his entertaining slapstick comedy and sickening romantic life. As depressing and saddening as Chaplin's life seemed, it turns out alright after all the misery. I feel like fans of Charlie Chaplin will be pleased as Chaplin the film will gain his legacy new followers. Chaplin is honestly a brilliant biopic of magical recreation and riveting style. It is still worth watching and absorbing a different time in America.
3 people found this helpful

Amazon CustomerReviewed in the United States on September 6, 2021
4.0 out of 5 stars
Slightly over a long film anchored by an incredible performance
Verified purchase
I’ve always known the chaplain was what launched Robert Downey Jr. and at the stratosphere so I was really glad I was finally able to sit down and watch it. Overall this really is a great movie and the production is excellent the direction is just as good and it gives you an extremely detailed picture of who Chaplin was as a person. Downey really nails for performance it’s one of those times we truly forget you’re watching a person playing a character. That said the attention to detail is kind of a hindrance to. There is so much of Chaplin’s life that is shown in this film it’s almost exhausting. At the same time though I don’t really know what could’ve been trimmed to help with that. All in all not a perfect movie but a very very good one and worth it just for Downey’s performance.

sharonReviewed in the United States on September 12, 2018
5.0 out of 5 stars
GREAT FILM!
Verified purchase
I loved this when it first came out, still do every time I see it. Fell in love with Robert Downey Jr. as an actor. I watched Charlie Chaplain movies when I was a child and everything was still in black and white, except the Wizard of Oz when they get to Oz (spoiler alert...LOL). This is an amazing immigrant story with all the ups and downs, but a well played out story of some history of the film industry. I worked in the film industry, mostly editing department. Cracked me up how some editing choices were made by the yard and glued together in the middle of a frame. Chaplain was a genius and Downey played him with real genius, too.
One person found this helpful

HopefulConsumerReviewed in the United States on February 21, 2021
4.0 out of 5 stars
grand
Verified purchase
Epic about not just a man but also an era--peopled by those who invented cinema. Old-school thorough film making in evidence here, with great attention to detail and context. Downey's performance is measured and very smart. The script is a bit episodic, like watching a mural, but the scenery and story kept me engaged. A creeping reverential tone, and occasional dialogue references to dollar amounts and fame, replace any evidence as to why Chaplain was revered by the public--and why a modern audience should care--and that is the film's flaw . . .
See all reviews
Back to top
Get to Know Us
Make Money with Us
Amazon Payment Products
Let Us Help You
EnglishChoose a language for shopping. United StatesChoose a country/region for shopping.
© 1996-2022, Amazon.com, Inc. or its affiliates