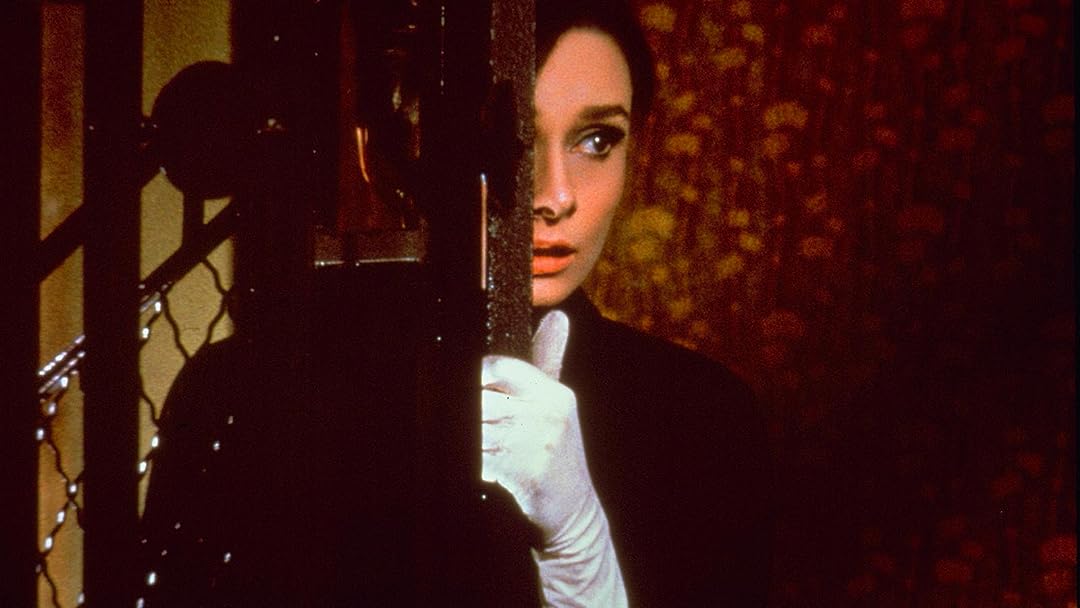 MaryReviewed in the United States on January 25, 2019
4.0 out of 5 stars
old fashioned 'Who Done It'
Verified purchase
It's pretty silly that the press made an issue of his age in this movie. He was in marvelous shape and looked just fine with Audrey Hepburn even being her senior by quite a lot. I thought they had good chemistry. They say the ridicule he took as to his age on this movie lead to his retirement from movies. That was a travesty. As for the movie it was a good "Who done it". You truly suspect EVERYONE at some point in the movie and usually several times. At about 16 minutes before the movie is over, you are sure of the answer but it was fun guessing until then. No nudity, no profanity, no sex scenes as seems to be in all movies today. It is refreshing to not feel dirty and guilty after watching a movie, which may be why some of the old movies are the best. TIP: if you are watching on Amazon Prime DO NOT look at the cast names and descriptions to the left as it gives away the twists and ending! Save that until after the movie is over.
74 people found this helpful

Peter R. TalbotReviewed in the United States on October 26, 2018
5.0 out of 5 stars
"The best Hitchcock Movie not made by Hitchcock"
Verified purchase
Superbly written, ably directed, brilliantly acted thorough escapism involving thugs killing each other to recover wartime booty, multiple false identities, the delights of Paris in the 1960's and rare philately in which Audrey Hepburn and Cary Grant charm the best heavies in film (Coburn, Kennedy, Matthau) into irrelevance. Add to that a seminal score by Mancini and you have one of the best escapist movies of all time. This film is the first that made me enamored of the French language, and started me on the road to a diffident literacy therein. If you see 100 movies in your lifetime, this had better be one of them.
63 people found this helpful

JenniferReviewed in the United States on April 29, 2020
5.0 out of 5 stars
Great quality DVD of a hard to find classic.
Verified purchase
This is one of my most favourite films. I own this film on VHS but haven't been able to find it on DVD, (unless it was an import that cost almost $100) so I was super excited to see that it was available on Amazon, for a very modest price. Of course I clicked "Add to Cart." Duh. It was a no-brainer.

I am reviewing the DVD, not the film itself, because ones taste in films is subjective.

The DVD comes in standard packaging, and the cover, also standard, is good quality. There is no insert, which I would have liked to have seen, but it isn't necessary. The film has been remastered and is also good quality, not like a bootleg that someone has ripped and burned in their mother's basement. Sound quality is great as well.

In addition to the feature film, this DVD also comes with bonus material, such as the original theatrical trailer, and two mini-documentary segments on 100 Years of Universal: The Carl Laemmle Era, and The Lew Wasserman Era. That was a nice surprise.

I give it five stars. As for the film, "Charade," well that's five stars also. If you are a fan of classic films and haven't ever seen this one, I highly recommend it.

Amazon CustomerReviewed in the United States on August 4, 2017
5.0 out of 5 stars
If you like movies that take you away for awhile this is one to watch
Verified purchase
One of the early-to-mid 1960s fun films that never takes itself too seriously. It also reveals the tensions about romance that sprouted up in this decade--do romantic relationships become doomed by inherent secrecy and if so, why do we keep pursuing them with such vigor? Even with that seemingly somber undertone, the film manages to turn the serious side of secrecy into playful courtship as Grant, the elder one, and Hepburn, the young beauty, team up to solve a mystery involving the death of Hepburn's former husband and man of mystery. The film has its share of intrigue and plot twists to keep one watching without distraction, and it moves in as breezy a way as the dialogue between Grant and Hepburn, which creates the firm foundation of the story. Both Grant and Hepburn show viewers why and how they became movie stars and solid actors. Grant, as usual, delivers a comic line as cool as can be. Hepburn keeps up and together, they become impossible to escape the viewers' attention spans. The supporting cast, including James Coburn, George Kennedy, and Walter Matthau keep the pace lively and the mystery enticing. The French scenery is beautiful and the modernistic styles, from dress to action spots make this a great time piece. Keep an ear toward some good inside jokes. Just a lot of fun!
39 people found this helpful

SLBReviewed in the United States on December 18, 2020
5.0 out of 5 stars
Classic Grant-Hepburn movie
Verified purchase
A wonderful 1963 American romantic comedy mystery film starring Cary Grant and Audrey Hepburn and produced out of the old Hollywood 'system'. Both actors meld wonderfully with their quick banter and lively dialog in a strikingly challenging event. Grant, charming as ever with his quick wit, teams with Hepburn, the eternal beauty mumbling and fumbling her way through a dangerous situation. The supporting cast features talented faces known for many years: George Kennedy, Walter Matthau and James Coburn. We bought this on a whim after seeing it listed as one of the 'must see' movies from this era. We were not disappointed. Highly recommended. Enjoy!
2 people found this helpful

M. AmbrosioReviewed in the United States on May 3, 2019
5.0 out of 5 stars
A Classic 'Hitchcock Movie' That Hitchcock Never Made!
Verified purchase
Have seen this movie numerous times on TV since I was a child and had thought it was directed by Alfred Hitchcock (I could easily see it fitting in between 'North By Northwest' (1959) & 'Marni' (1964). Was surprised only a few years ago to find that Stanley Donen was the director.

So anyways, great film with great actors (Cary Grant, Walter Matthau) & actresses (Audrey Hepburn), even the supporting actors -as villians such as James Coburn & George Kennedy, both went on to become famous on their own. Also beautiful film work of Paris, the chase scene from the subway to the opera house is memorable.

As always with Criterion releases, the extras are good, not a lot of them, but very informative.
6 people found this helpful

samanthaReviewed in the United States on March 29, 2021
1.0 out of 5 stars
A definite classic pass....
Verified purchase
I'd heard that CHARADE was a great movie. I adored Cary Grant in many of his films, and I enjoyed Audrey Hepburn in FAIR LADY. Typically, I enjoy "classics", but this one is a definite pass. There is zero chemistry between Grant and Hepburn. Considering the time period this film was released, still did not help me. Hepburn's character annoyed me because she was so helpless and pathetic and pining over a man who she did not even know! How can you tell a man over and over again that you love him and he keeps lying to you and you keep discovering that he's lying? Ugh! Grant is his suave wonderful self, but even his performance could not redeem this film. I found myself rolling my eyes (which is a bad sign) as I continued watching the plot unfold. A sense of relief washed over me when it finally ended. The one star is for the music score...ONLY.
One person found this helpful

Warren T.D.Reviewed in the United States on February 15, 2020
2.0 out of 5 stars
Worst Hitchcock movie ever?
Verified purchase
I watched "It Takes a Thief" just before this movie. Same director, Carey Grant stars. "It Takes a Thief" plays well even now. Grace Kelly is a strong woman who is on an equal footing with Cary Grant. Strong, smart. The plot has the right pacing, nothing overdone. The cinematography is exquisite. By comparison, this movie is a disaster. Gads, Hepburn's character is so lame by comparison to Kelly's. The woman would sell her soul to Grant if he smiled sideways at her. I'm not a feminist type but this was too much for me to stomach. Gag. Other characters like George Kennedy's, ugh. What a waste of a good actor. Finally, the plot is contrived. Too many silly pseudo-dramatic scenes that go on and on. The final stage scene is ridiculous. There is no stage that is designed that way, it's preposterous. They should have taken away the screenwriter's artistic license. Finally, I don't know how a director like Hitchcock could make Paris seem so unappealing.
One person found this helpful
See all reviews
Back to top
Get to Know Us
Make Money with Us
Amazon Payment Products
Let Us Help You
EnglishChoose a language for shopping. United StatesChoose a country/region for shopping.
© 1996-2022, Amazon.com, Inc. or its affiliates