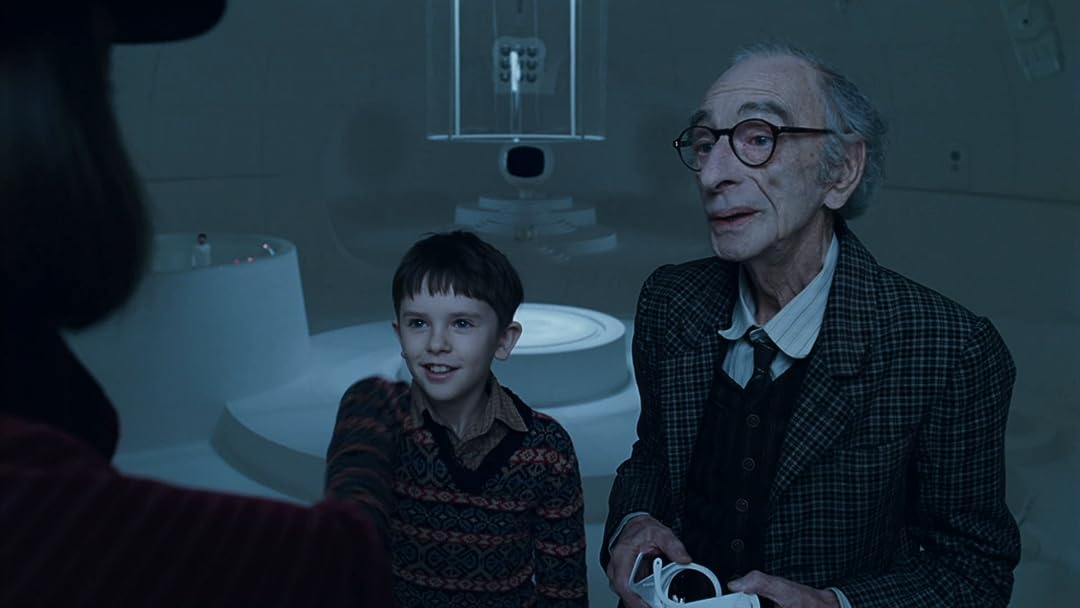 Charlie and the Chocolate Factory

RoboGriffeyReviewed in the United States on April 4, 2018
3.0 out of 5 stars
Kids will love it. Adults will hate it and yearn for Gene Wilder
Verified purchase
Pro's. My nieces absolutely adorred this and watched it 3x during the rental period.

Con's; This is nowhere near as charming, interesting well executed or entertaining as the Gene Wilder original. Johnny Depp comes off incredibly creepy. Like a deranged Michael Jackson during the child abuse allegations. It's awkward and uncomfortable for adults.

T-ZER0Reviewed in the United States on March 16, 2020
5.0 out of 5 stars
The Preferred Dark Chocolate
Verified purchase
I wanted this movie for a really long time. I grew up with Willy Wonka and the Chocolate Factory, the one with Gene Wilder. I enjoyed this film when I saw it in theaters. When this came on DVD in 2005, I asked if my mother or aunt would buy it for me. They refused because it was too weird for them. They ended up buying Hoodwinked instead.

I guess I understand their reason, they grew up with the 1971 film, my older brother used to watch it on VHS all the time. Now that I can afford to buy the movies I want. This was a must have. I do prefer this film a bit more over the original. No offense, but this one didn’t have a lot of musical numbers that weren’t needed. And Dahl’s family approved this film.

The film comes with a collectible booklet with full color shots and images from the set of the film. Along with a note from the director himself Tim Burton. (I just added that stuff on his face to be funny!) The pictures in the booklet are pretty cool, this set is similar to the Batman 1989 20th Anniversary set, another movie directed by Burton.

The quality of the film is full 1080. Meaning that there’s no black bars when you play it on your HD TV. I like that quality the most, because it proves that you’re not missing anything when you watch it. This will play on a Xbox One or PS4 perfectly whichever one you have. I don’t think it will work well on old Blu-Ray players made in 2011 or older, because those are outdated.

The main menu is like any Warner Bros. menu. That means when you load the disc, there will be no previews, it will play the movie automatically. You’ll have a pop-up menu throughout the movie which gives you options for Languages, Scene Selections and Special Features. If you want to get to the real main menu, you have to wait till the movie is done or skip to the end, like any other WB Blu-Ray. But the downside is like any other WB Blu-Ray, you have to suffer through all those Warnings against piracy in practically every language before you get to the menu. You can skip it, but it’s over 30 languages. It’s gonna take a while.

By the time you get to the main menu. It’s not as impressive as you think. It’s a blue menu with a bunch of options. A basic WB menu.

This is still worth a buy, it’s a great collectors set and if you enjoy the movie as much as I do. Watching this will be like enjoying that sweet, rich, dark chocolate.

I can't believe Charlie is Freddy Highmore from Bates Motel and The Good Doctor, ha ha... I love that guy. Very talented cast for sure. But overall, it's just a twisted Dr. Seuss style copy with extra helpings of The Grinch. The frames of the Bucket house look like the ghetto in Whoville.

Fun to look at the new colors but no real substance here. I suggest an evening with Frankenweenie for a more original retelling over this wannabe.
12 people found this helpful

Raisuli the MagnificentReviewed in the United States on August 14, 2017
3.0 out of 5 stars
It's okay, but kind of unnecessary.
Verified purchase
When remakes are done it's usually because the film needs to be updated for a younger audience. I'm not so sure another version of Raol Dahl's book was necessary, but someone made it anyway. The result is a very stylistic yet tepid film that lacks the poignant bight of the film that starred Wilder.

You can't fault it technically, because it is a very competent production, and the familial message at the end is decent enough, but Johnny Depp is no Gene Wilder, lacking both zingers and energy to deliver them when the miscreant kids misbehave.

I don't know, I guess maybe I'm emotionally attached to the film I saw as a kid, because when Charlie got his golden ticket I and the audience were excited for him. You get some of those same feelings here for this film's Charlie, but the sense of wonderment as you tour the factory is somehow lost. Again, maybe children who see this film will be impacted differently, it is after all a film meant for them.

It's interesting for what it is, but it does seem a bit dark and less inviting than its predecessor. And I think ultimately that's the vibe of the entire film that holds back a better cinematic experience. One can't help but wonder what would happen if you gave 1960s film makers today's technology to improve on or otherwise tweak the original as opposed to attempting a remake.

Make of that what you will.

If you have a kid he might like it, but I think there are better children's films out there.
5 people found this helpful

Amazon CustomerReviewed in the United States on December 25, 2019
1.0 out of 5 stars
Why? So terrible.
Verified purchase
This will go down as one of the worst remakes in the history of film. Every novel and special components of the original film were left on the cutting room floor. Tim Burton should be ashamed and as his accomplice Depp should assit in his hari kari.
6 people found this helpful

Randal J. GeringerReviewed in the United States on July 29, 2017
4.0 out of 5 stars
Good Remake of a Classic
Verified purchase
Good movie. I've watched it twice now. The original movie was financed by Quaker Oats to sell candy but it ended up being a classic.

Freddie Higmore did a good job and was on par with Peter Ostrum as Charlie Bucket. Gene Wilder had his finest acting moment as Willy Wonka so it was a tough act to follow. Johnny Depp was wonderful as Willy Wonka thanks in part to the flashbacks to his youth, which added to his character.

David Kelly a Grandpa Joe was a hoot as were the entire Bucket family and their house. Deep Roy as the Oompa Loompa was a good twist and the music was enjoyable.

For free on Amazon Prime, I'd give it a go.
3 people found this helpful

Larry G. WachsmuthReviewed in the United States on May 22, 2018
5.0 out of 5 stars
A new would be classic.
Verified purchase
This version of Charlie and the Chocolate Factory is right up there on a par with the Original Charlie and the Chocolate Factory starring Gene Wilder. In fact, if the 1971 film didn't have Gene Wilder in it, I would straight up prefer the 2005 film starring Johnny Depp. The 2005 film is imbued with Tim Burton's aesthetic which really gives this version class and cohesion.

In comparison the 1971 film with Gene Wilder seems rather rinky dink. The quality of the sets is poor compared to the 2005 version. Gene Wilder definitely "makes" the movie memorable.

If the 2005 version had Gene Wilder starring as Mr. Wonka it would be a near perfect movie in my opinion. Johnny Depp, gives a very good, convincing performance as Mr. Wonka, but is a little less sinister than the Wonka played by Gene Wilder. Love this movie. Would watch it again.
One person found this helpful

sefriendlyguyReviewed in the United States on June 10, 2017
5.0 out of 5 stars
FUNNY AND RELATEABLE MOVIE FOR KIDS!
Verified purchase
JOHNNY DEPP, PLAYS A VERY GOOD WILLIE WONKA IN THIS MOVIE, ITS BEEN UPDATED FROM THE ORIGINAL
THEY ARE A FEW CHANGES, BUT THEY DID NOT MESS UP THE MOVIE, IT MADE IT BETTER,
THE COLOR IS BETTER AND WITH THIS ONE, THERE IS A DISC WITH SPECIAL FEATURES,
IT TELLS HOW THEY MADE CERTAIN PARTS AND ITS ACTUALLY VERY INTERESTING
(SPOILER ALERT) THERE IS A LONGER ENDING AND A LITTLE DIFFERENT FROM THE FIRST ENDING IN THE MOVIE
IF YOU HAVE SEEN THE ORIGINAL, YOU WANT NOTICE THE DIFFERENCE.
I WOULD SUGGEST EITHER READ THE BOOK, CHARLIE AND THE CHOCOLATE FACTORY OR JUST RENT OR BUY THE ORIGINAL
WILLIE WONKA AND THE CHOCOLATE FACTORY,
YOU WILL ALSO LEARN ABOUT THE AUTHOR OF THE ORIGINAL MOVIE AS WELL, IT S FASCINATING!
A VERY GOOD MOVIE FOR THE KIDS AND GROWN UP ADULT KIDS TOO!!
4 people found this helpful
See all reviews
Back to top
Get to Know Us
Make Money with Us
Amazon Payment Products
Let Us Help You
EnglishChoose a language for shopping. United StatesChoose a country/region for shopping.
© 1996-2021, Amazon.com, Inc. or its affiliates