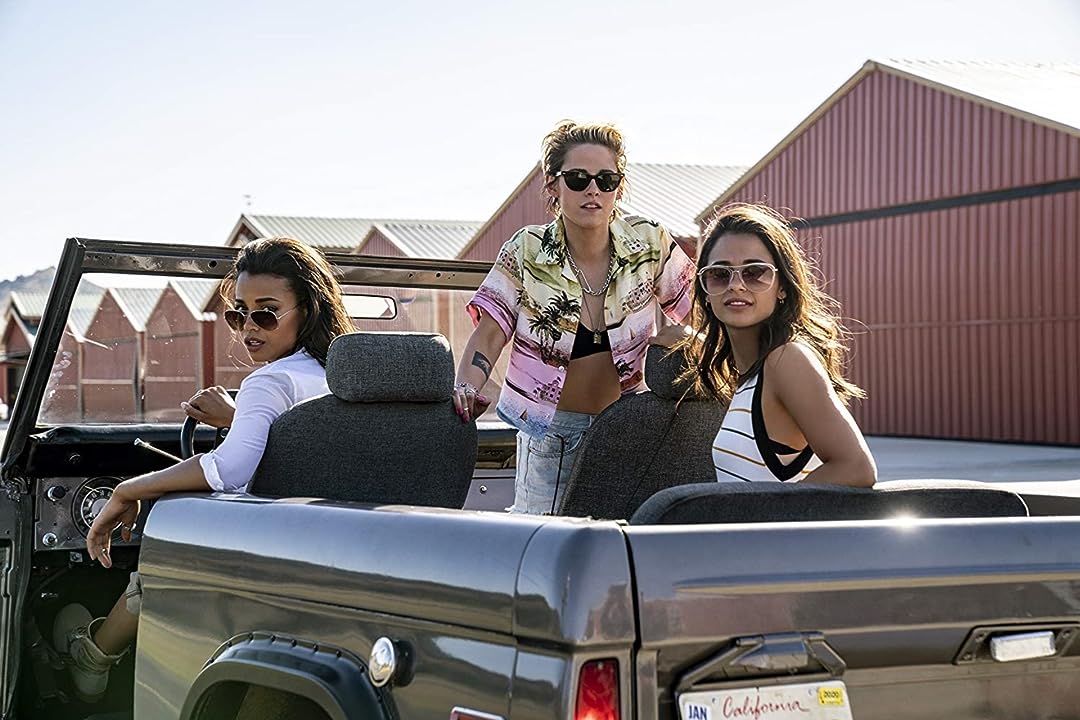 PB2Reviewed in the United States on December 14, 2019
1.0 out of 5 stars
Get Woke, Go Broke
There's a reason why this film bombed at the box office. In the midst of all this PC, SJW-woke garbage pervading all through Hollywood these days, somebody forgot how to write a good story, with a good plot, and with characters that people care about. This isn't it.
195 people found this helpful

DKReviewed in the United States on November 27, 2019
1.0 out of 5 stars
Um...
I gave this movie a chance. I really did. But, it turned out to be a disaster. At least the McG's films had heart to the characters and story. This was just empty. When did the Angels become an international spy agency? They're supposed to be private detectives. Also, the director needs to go to "action" film school to learn how to edit action scenes or at least shoot them correctly. I was hoping to have an enjoyable time but was very disappointed.
143 people found this helpful

CarmelDCReviewed in the United States on February 20, 2020
4.0 out of 5 stars
Enjoyable flick despite the heavy-handed female independence messaging
Verified purchase
If you're looking for two hours of dumb fun, this movie fits the bill quite well. Not sure why this performed so poorly at the box office but I have a few ideas (more on that shortly). First, the good news. These three young actresses are fantastic and their onscreen chemistry is a pleasure to watch. All of them are beautiful, charismatic and have amazing comic timing. This was supposed to be a Kristen Stewart led vehicle and she is clearly very talented but I thought Ella Balinksa stole this movie. She's truly riveting from beginning to end. Watts (who I first watched in Aladdin) was also very good. Why did this movie bomb? Critics have said the lead star power just wasn't there. That may have played a part but my theory is that this movie had nowhere near the T&A quotient that male viewers have come to expect from these movies. Think about it...What do guys growing up in the 70s remember most about TV's Charlie's Angels? Farrah's hair and Cheryl Ladd and Jaclyn Smith in tiny bikinis. What do they remember about the 2000s Charlie's Angels? Lots of cleavage and semi-nudity, and Cameron Diaz and Demi Moore simulating girl on girl relations at the beach...while wearing tiny bikinis. This Charlie's Angels was way tamer. Sure they wear quite a few skimpy and tight outfits but it was far less skin than what fans of the franchise got to see in the earlier movies. Perhaps that was due to the director and star Elizabeth Banks's emphasis on proving women can do their own thing and ring their own bells or whatever. That message is drummed into the viewer's head from the beginning of the trailer (and the film) and repeats many times throughout the movie. A wonderful and powerful message. Nothing wrong with it. But if viewers suspected they were gonna be hit over the head with it (as the trailers suggested) when they just wanted a silly escape on date night, it's not surprising that many stayed away. By the way, it probably didn't help that powerhouse actors like Patrick Stewart and Djimon Hounsou got so little screen time.
70 people found this helpful

Ferris BuellerReviewed in the United States on November 26, 2019
5.0 out of 5 stars
Cant wait to own Charlie's Angels 2019 in 4K UHD!!!!
Absolutely loved this film! But then I'm a big Charlie's Angels fan... unfortunately many who haven't even seen it nor will probubly are already down on it because it contains positive messages for young women... well, DUH. It's CHARLIE'S ANGELS!!!
It's about young, smart, courageous, adventurous young women and always has been! Don't let the naysayers get you down, it's a well written, well directed, fun, thought provoking film that has just as much style, glamour and sexiness as the Original TV Series, Barrymore Films and even James Bond!

To me the Angels were the flipside to Bond, there were a lot of Detective and Spy shows out there but extremly few that depicted intelligent, skilled, strong willed women - The Bionic Woman, Remington Steele, The Avengers TV show and Charlie's Angels were pretty much it and the reason why they are all among my favorite series... female adventure characters with both style, sophistication and brains are hard to come by unfortunately... but Charlie's Angels has always been a hallmark of all of those things where women can be all at once sexy, confidant, smart and independant.
What's wonderful about the new film is that it takes the Angels to their logical modern level by making the Townsand Agency an international organization with plenty of Agents and Handlers worldwide, the film brings the whole Charlie's Angels Universe together and explains why we have different Bosleys between the shows and films... it's like a Rank Level or Codename for the Handlers which I thought was quite clever to explain the different Bosleys we've seen over the years.

My only criticism of the film which is really just a personal nitpick is that Patrick Stewart plays John Bosley from the show and in my opinion they should've left the original Bosley alone... you'll see what I mean when you watch it.
I didn't mind Stewart being 'a ' Bosley, just not THE Bosley, I mean if you're going to have different Bosleys anyway why make another actor the same one!? That was the ONLY part that made no sense to me as a longtime Fan. They also state that Patrick Stewart was the Bill Murrey version too (again supposed to be the original.) I just wish that David Doyle who played John Bosley in the Original Series was left alone.
Besides that it's awesome and has everything you remember and love about Charlie's Angels for sure with some added dimension - I won't spoil everything here but many things make sense and are explained including why John Forsithe, the original voice of Charlie isn't around this time either (or is around I should say but in a different way), tho I am very happy he was in the Barrymore Films.
In any event if you're a Fan or recent follower to the world of Charlie's Angels you should love it, if not then you probubly won't see it anyway.

I'll definetly be getting the 4K UHD of this, I already have the 4K of the first Barrymore film and plan on getting the Millcreek Complete Series of the show on Blu very soon. That just leaves Sony to release Full Throttle on 4K UHD to finish it all off and I'm praying to the Angels above that will happen very soon.
One quick word on the box office, unfortunately the new film isn't doing very well, I hope it makes enough for a sequel or two as it would be a shame this is all we get for the current era but the way I see it at least we now have a full Charlie's Angels Trilogy where we didn't before... Charlie's Angels 2000, Charlie's Angels Full Throttle and Charlie's Angels 2019 which is another reason why I'm very happy this new film both explains and ties together all previous versions into one cohesive continuity.

Firewing2Reviewed in the United States on February 22, 2020
4.0 out of 5 stars
Worth it just for Kristen Stewart's performance
Verified purchase
I mean, it's not going to win an Oscar or anything, but it's a fun romp with some decent action, even if the sentiment can be a little try-hard at times. If nothing else everyone involved seems to be having a great time. And you get to see Kristen Stewart punch out Sir Patrick Stewart. How can you not enjoy this?
63 people found this helpful

YoungestJettReviewed in the United States on February 20, 2020
5.0 out of 5 stars
For my Ladies
Verified purchase
It’s a great rendition to a classic! It sends an empowering message for women, hence the backlash from toxic masculinity. Forced my father to watch this with me, “I don’t understand why it was given such horrible reviews, I mean it was a decent movie, people expect too much now of days, it was entertaining and that’s all there is to it!”. I love the ties to the older franchises, and continues to enstile a passion and hope for women! Well done
64 people found this helpful

anon ymousReviewed in the United States on March 25, 2020
1.0 out of 5 stars
This is not what women want
Verified purchase
As an educated woman, there aren't enough expletives to convey just how bad this movie is. In its attempt to be uber progressive on the back of an already progressive franchise, this fails miserably. They're so progressive, you see, that the black guy still has to die, because he's you know....a man. And all white men are evil. And all women are geniuses, especially the pretty ones. I'm surprised they didn't choose even uglier women to play the Angels, then it would have been ultra progressive. And where was the 3rd angel? Why change the entire history of the franchise? Just to justify Bosley being a woman? Couldn't you just create a movie to stand on its own merits and call it something else if your only goal was prove just how great and powerful women are? This movie would have you believe that it's not actually made in 2019, but in 1950 when women hardly had a say and men may well have rather intentionally murdered tons of people just to avoid listening to a woman.

The writers forgot how to build a story or create entertaining characters with this one. Luckily, we still have the 2000 version. At least until people decide to remove it for not being woke enough.
48 people found this helpful

ReviewReviewed in the United States on March 25, 2020
1.0 out of 5 stars
Grieve For Charlie
Verified purchase
It's patently clear, Hollywood is not enjoying making films featuring make-believe heroines, otherwise why would they, time and again, do such a poor job of it? Now I don't know whom to grieve for more, Charlie or Charlie's angels. My natural instinct is to grieve more for Charlie, but I am open to grieving for the angels too, equally of course. The spectacle has more the feel of an obituary for a once popular 70s TV show, belated by about three decades. It's sad frankly that no magic exists to breathe life back into something that should really be left to rest in peace. There is no reinventing this one to suit the flavor du jour.
32 people found this helpful
See all reviews
Back to top
Get to Know Us
Make Money with Us
Amazon Payment Products
Let Us Help You
EnglishChoose a language for shopping. United StatesChoose a country/region for shopping.
© 1996-2021, Amazon.com, Inc. or its affiliates