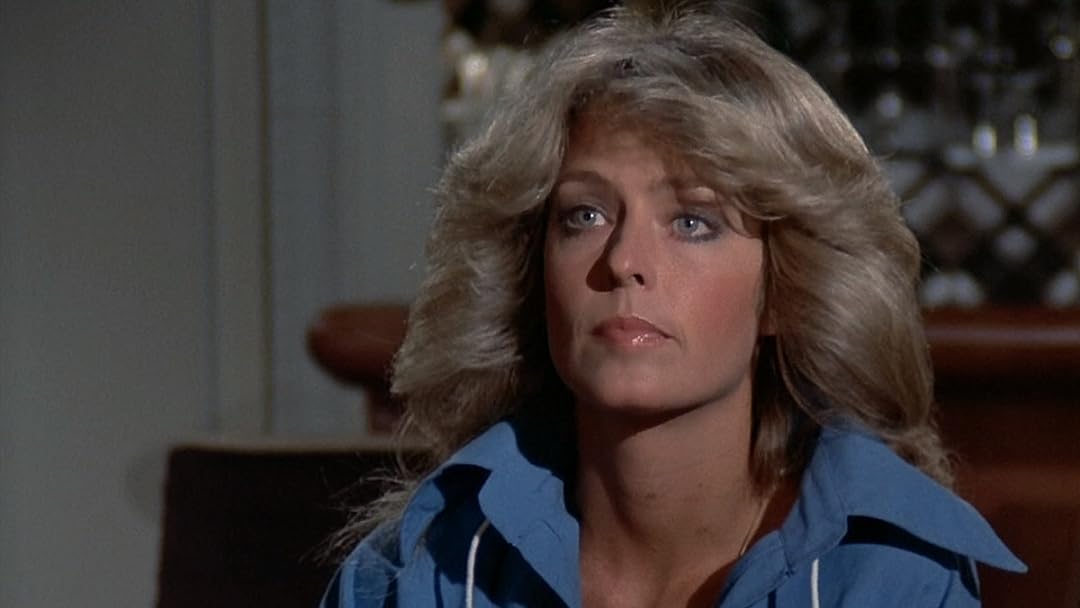 (502)
6.5197713+
The first season features the original Angels Farrah Fawcett, Kate Jackson, and Jaclyn Smith and all of their adventures from one of the most classic shows in television history. Beautiful, intelligent, and ultra-sophisticated, Charlie's Angels are everything a man could dream of . . . and way more than they could ever handle! The Angels employ their incomparable sleuthing and combat skills, a...

HonkyTonkManReviewed in the United States on August 7, 2017
4.0 out of 5 stars
Episode running times
Verified purchase
"Charlie's Angels" was such a ground-breaking, marvelous and unique private detective television series.

John Forsythe provided the voice of their boss, the unseen Charles Townsend,
who directed the 'Angels' crime-fighting operations over a speaker-phone.

Here are the exact running times for all 23 episodes that were included on this Sony Pictures Home Entertainment 5-disc DVD set.

It appears that all 23 of these episodes were presented in uncut form on this Sony Pictures Home Entertainment 5-disc DVD set.

There weren't any teasers included in any of the episodes on this 5-disc DVD set.
It might be possible that each of the 23 episodes didn't have teasers when these episodes originally aired on ABC.

The bonus featurette "Angels Forever" was a waste of my time because Kate Jackson, Farrah Fawcett, Jaclyn Smith, Cheryl Ladd,
Shelley Hack and Tanya Roberts all had absolutely nothing to do with it.

"Angels Forever" mostly features interviews with fans.
The only good thing about this lousy featurette is that "Charlie's Angels" executive producer Leonard Goldberg was interviewed for it.

The picture quality and audio quality on this 5-disc DVD set are both good.

Cynthia HallReviewed in the United States on April 15, 2020
5.0 out of 5 stars
Throwback fun!
Verified purchase
It's been a blast watching this from my past with my 17 year old daughter!! It's been hysterical watching her reactions to the show! Covid has stunk but this is a fun distraction!
5 people found this helpful

King DimholtReviewed in the United States on September 13, 2010
5.0 out of 5 stars
Possibly Farrah Fawcett's Best Work.
Verified purchase
If you're on this page, you probably already know that this show is about 3 women (Kate Jackson, Farrah Fawcett, and Jaclyn Smith) in the police department who were underused, and then they get hired by a private investigation firm owned by Charlie.

What makes this show so great is that it is full of interesting contradictions. While Sabrina Duncan (Jackson), Jill Munroe (Fawcett), and Kelly Garret (Smith) are good at their jobs, they aren't afraid to let emotion and vulnerability into their characters.

Bosley is uptight and stiff in the office and about money. But he often goes into these hilarious acting roles (for the purpose of helping with the investigation). He's been a high roller, a wealthy Boss Hogg type, and one time he cried 'really hard' at a staged funeral.

While Charlie is professional, he also has compassion. In "The Big Tap-Out" he is willing to do a job for a friend for not so much money. In "Target Angels" he is clearly concerned for Jackson, Fawcett, and Smith. In "Dancing In the Dark," he is compassionate and sympathetic towards a widow who has had her life savings stolen.

The chemistry is also there. We have Sabrina Duncan (Jackson) who is a thinker, Kelly Garret (Smith) who is kind and vulnerable, and Jill Munroe (Fawcett) who often has a comeback line.

Many people consider "Angels In Chains" the defining episode. But I would be quicker to give that award to "Target Angels." All 3 of them have some good screen time, we see why holding a relationship is difficult for them, we meet Sabrina's father and x husband, Bosley is uptight about money, but then he has a funny moment when he cries 'too heavily' at a staged funeral, the Angels uncover a plot against Charlie, and they miss seeing Charlie by seconds. The end is great as they run after his car screaming: "Charlie you get back here!"

Without going through every episode, "Dancing In The Dark" is a good one where all 3 of them have some screentime, and Bosley gets to act as a proper rich man, and then a con-artist.

"Angel Trap" is an interesting episode in that we are permitted some sympathy for the villain being set up.

In "The Big Tap-Out" they also have good screentime, and we get to see Bosley ham it up as a wealthy Boss Hogg type.

All in all, this is a great tribute to the wonderful Farrah Fawcett. It's too bad that she only stayed one season.
One person found this helpful

Beantown JimReviewed in the United States on May 11, 2014
4.0 out of 5 stars
Love them or leave them
Verified purchase
Charlie's Angels as a TV series was based on the series of spy films(oo7,etc.) and Mission Impossible...to the extent there were 'crime fighters' working for a handler, in this case 'Charlie' and his guy. Each week, they'd be assigned some case, breaking up some criminal enterprise, etc. Why this wasn't left to the police was an open question.

It might surprise people unfamiliar with the show, having heard only about Jaclyn Smith and Farrah Fawcett, that it was an extremely puritanical show. Yes, there were some short bikini scenes, but overall, it was conservative compared to say Friends or even Seinfeld. The show dealt with straight crime fighting with a dollop of humor. It could've been rife with demeaning exploitation of the stars, but to its credit did not.
If you're a fan from way back when and were disappointed by the movies that followed(and who wasn't?), buy this season to see why you loved the original. Just seeing Jaclyn Smith's smile will restore your own.

This show is perfect for couples who can watch it and go back to a different time. The show doesn't challenge you and that's to its credit. It's just funny, adventurous, and captivating enough to entertain. That's good enough...
One person found this helpful

kevin k.Reviewed in the United States on June 29, 2009
5.0 out of 5 stars
man, what a great show!
Verified purchase
i was watching the farrah tribute marathons this week-end and had such a fun time with it that i ordered the first season. hadn't really watched it since it aired (when i was in middle school-- what a perfect age for this show (i'm a dude)) and was really surprised by how enjoyable it is. sure, it's as formulaic as they come, but the cast had great chemistry, the actors acquitted themselves quite nicely, and the show was actually pretty funny (intentionally-- as well as unintentionally of course). and the music was really great (parts actually reminded me of lost's music-- giacchino must have studied 70's t.v. music). plus, you gotta love all the cars crashing down some hill and totally exploding! and then there's all the no-bras and bikinis(kinda the bread and butter of the show, i guess).

anyway, this is a super-fun show that has all the best the 70's had to offer. and you'll be surprised at how fun and innocent and, oddly enough, how girl-power it is.

too bad there's no commentaries(the original angels on a couple of the best eps would have been priceless) or in depth documentaries or making-ofs, but oh well. at least we have have this classic show.

and a quick word about farrah. she was never my favorite-- to my 10-year-old eyes kelly was the most beautiful and sabrina was the coolest. but watching these again it's easy to see why she was such a colossal sensation. of course she was great lookin', but she was also really funny, flirtatious (in the good, innocent kind of way), and just had this honest, fun way about her. and man, that smile just dazzled. rest in peace farrah fawcett.
4 people found this helpful

Serkan OkarReviewed in the United States on January 2, 2015
4.0 out of 5 stars
Charlie's Angels still entertaining as it was back then
Verified purchase
The show takes me back in time when I used to watch Charlie's Angels as a kid. I think the entertainment value of the show still holds up to a satisfying degree although some of the writing and production design shows its age. All three angels are absolutely stunning and gorgeous. My biggest complaint with the product is lack of English subtitles (Product description state that there are English subtitles - that is incorrect). Also the packaging could have been much better. Each disc is in its own plastic DVD case but there are no episode list or titles listed anywhere. The overall picture quality is very good as it is digitally remastered however there are occasional artifacts here and there that show up. I wish they had cleaned them up. I think the show deserves a better edition than this and hope sometime in the future, it will get a better treatment. (PS-it was too funny to see Tommy Lee Jones in the pilot episode at the age of 30).
One person found this helpful

Amy W.Reviewed in the United States on August 29, 2009
5.0 out of 5 stars
It brings back more than memories
Verified purchase
When Charlie's Angels entered my life, I was a senior in high school. Watching the angels each week gave me the idea that a girl COULD be beautiful, wear great clothes, have fabulous hair and still kick someone's butt and have an awesome career in something like the police field. I never went that route, but it opened up a whole generation of girls eyes into believing in themselves for whatever they chose to do. Each week I tuned in to see what exciting adventure the gals would find themselves in, and although there are episodes that have some corny possibilities in them, this show was meant to entertain. It still does, 30 years later. I am sad that Farrah Fawcett was only in season 1, as I think she added a lot to the show with her character, and of course - us girls were just wanting THAT HAIR. Have some fun, go back in time 30+ years, and watch the first season of Charlie's Angels, which in my opinion, is the best season.
One person found this helpful

cplewisReviewed in the United States on October 8, 2003
4.0 out of 5 stars
Original season of Charlie's Angels = awesome!
Verified purchase
Just having the full first season of Charlie's Angels on DVD is awesome. Any one of these episodes is right there at your fingertips, with clear pictures and sound -- and no commercials!
A few negatives:
1) No sub-titles. The closed-captions are there, but on many TVs it's impossible to bring those up without muting the TV, which somewhat defeats the purpose.
2) The packaging is flimsy and a little difficult to deal with.
3) No "extras" or interviews (the "Angels Forever" featurette is just interviews with fans, and the trailers for the recent Angels movies are dull).
However, spending too much time complaining about those three things will overshadow my first point: having the entire first season of the Angels on DVD is incredible, and well worth the highly reasonable price.
5 people found this helpful
See all reviews
Back to top
Get to Know Us
Make Money with Us
Amazon Payment Products
Let Us Help You
EnglishChoose a language for shopping. United StatesChoose a country/region for shopping.
© 1996-2022, Amazon.com, Inc. or its affiliates