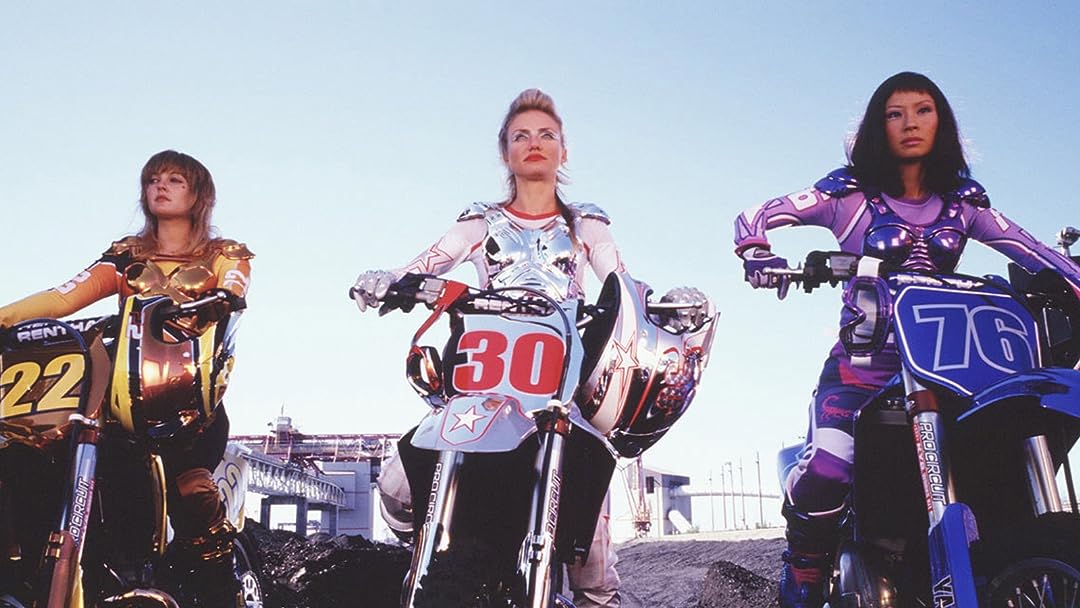 joel wingReviewed in the United States on July 22, 2020
4.0 out of 5 stars
Good follow up to 1st film with spoofs costumes and action
Verified purchase
The success of the first Charlie Angel’s movie inevitably led to a sequel, Full Throttle. This one might be labeled Girls Just Wanna Have Fun. That was shown by the inclusion of some spoofs. The start for example is a take-off of Raiders of the Lost Ark. Later they pose as members of CSI: Crime Scene Investigation. The costume play becomes a mainstay of the film afterward as the Angels get to play BMX racers, nuns, ship welders, and more.

At its heart however Full Throttle was just like the TV show and the first movie. It was three smart, sexy and determined women. Basically if you like the first film the second one was just as good.
C

Amazon CustomerReviewed in the United States on August 22, 2018
5.0 out of 5 stars
There's more to this movie than you may think
Verified purchase
I've loved this movie since it came out. There definitely are some moments within it that are cringey by today's standards (and even the standards back then), but I think that what makes me enjoy this movie is the female friendship, how strong these women are together and on their own, and how light the movie is (in terms of tone). Definitely a product of the girly girl-power type trend that was going on in the early 2000s, but what's wrong with being a girly girl? One can be badass and unapologetically "girly."

I didn't really like the choice of villain or the villain's motives. But, for me it wasn't all about the plot. As a young girl when I first saw this, I was in awe because there just weren't many female led action movies like this at the time (and today too). Often if there is a female action character or even just female character, she is made to be so serious and no-nonsense or irrational and one dimensional. That portrayal exists in just about all the action movies. Such a lazy thing for movie studios and writers to do. I think this movie kinda breaks that habit (the Angels are funny, have lives, are kickass, and are super tight with each other), but there's still a ways to go, although I do see studios getting there. Looking forward to Captain Marvel!

As for keeping true to the source (the TV show), I think it generally does a good job of keeping the premise going (Charlie, the Angels, Bosley, the big case, disguises, gadgets, going undercover). I think it's still sexist with its exploitative, biased, and stereotyped portrayal of women just like the TV show was, but maybe a little less so. I hope the next iteration of Charlie's Angels really tackles that aspect and puts it away for good.

Mary ScoheraReviewed in the United States on November 19, 2015
5.0 out of 5 stars
Great flick; watch the censorship
Verified purchase
Unbelievably funny and one of the best of the series. However, BEWARE of censorship - in a scene with Drew Barrymore...you are not warned or notified before renting or buying and if you have any eagle eye like my husband, he noticed it immediately...In one of his fave scenes the Angels are dancing with the real-life PussyCat Dolls! It's an awesome, pretty sexy (but really PG-13...really) the entire time...and in one scene Drew's character (fully clothed) is pushing her breasts against a patron...well, you won't see that on the Amazon version and we still can't figure it out. It won't wreck your experience at all it will probably just piss you off. Of course, if your new to the flick, you won't even notice.
15 people found this helpful

OligonicellaReviewed in the United States on November 18, 2019
5.0 out of 5 stars
Many laugh out loud moments, the rest were smiles.
Verified purchase
Very hard to not like this movie as it's incredibly obvious that everyone involved with making it had a buttload of fun doing so. Doesn't hurt that all of them were quality actors. Or that the script was tight, fast and fun.

And lets not forget Drew Barrymore, Lucy Liu and Cameron Diaz - some very noteworthy eye candy who obviously have no qualms about being objectified. Vive les femmes!
2 people found this helpful

ChrisSherrillReviewed in the United States on May 12, 2021
1.0 out of 5 stars
Disappointed
Verified purchase
I expected to like this movie. I read a number of the positive reviews and was ready to be amused and entertained. What a disappointment lay in wait. Over-the-top was funny when the three stooges did it. This was not funny and the looks of the stars, while enchanting, wasn't enough to save the tired, rundown story and dialog.
One person found this helpful

Paul S. PersonReviewed in the United States on May 23, 2021
4.0 out of 5 stars
Eye Candy and Popcorn
Verified purchase
This is a film clearly based on the TV show. If, like myself, you have only vague memories of the TV show, you may find some characters a bit hard to figure out.
Still, the basic idea is the same: three female operatives bounce around from situation to situation steadily getting closer to solving the case.
Lots of humor, lots of action, lots of young women to look at.
And villains.

AdamReviewed in the United States on May 3, 2021
4.0 out of 5 stars
A fun, comedic take on the 70s TV Classic!
Verified purchase
Having grown up in the 1970s, I avidly followed a lot of cop/crime drama shows of the era. This reboot or remake of original series is something of an homage. I'm surprised that this movie somehow managed to be fresh, and entertaining. There is no replacing the iconic voice of John Forsythe who is back as Charlie Townsend. Just like in the television series, Charles Townsend's face will not be seen which is how it should be.

Raziel1313Reviewed in the United States on January 21, 2020
3.0 out of 5 stars
They should have stopped at 1
Verified purchase
Way over the top action with fanservice thrown in. You get what you pay for but if you are looking for an action movie that does more than get to the next explosion you are not looking at the right movie.
One person found this helpful
See all reviews
Back to top
Get to Know Us
Make Money with Us
Amazon Payment Products
Let Us Help You
EnglishChoose a language for shopping. United StatesChoose a country/region for shopping.
© 1996-2021, Amazon.com, Inc. or its affiliates