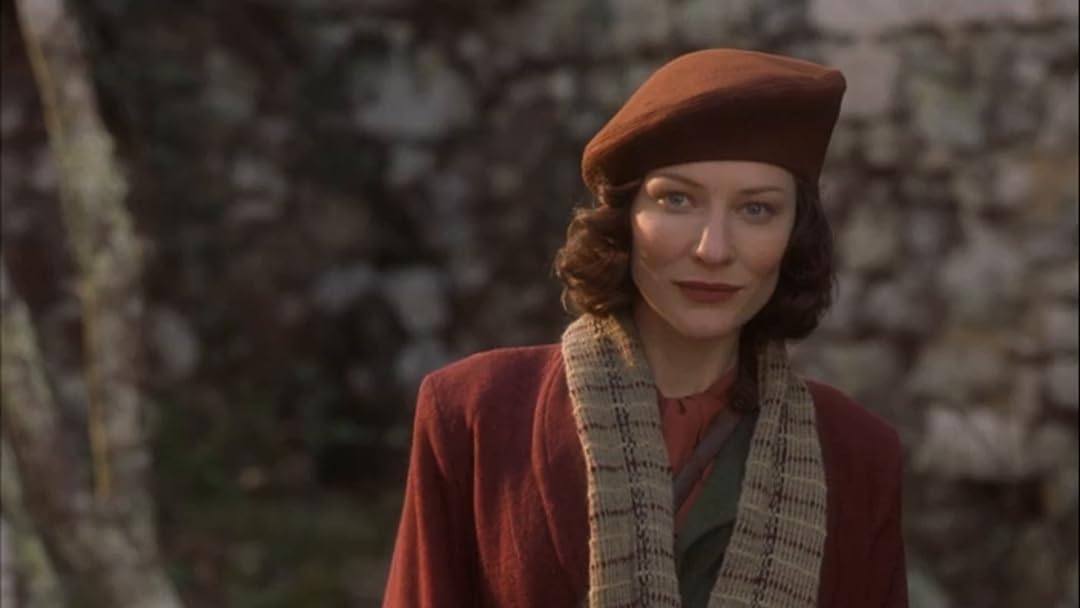 (1,396)6.42 h 1 min2001PG-13
Cate Blanchett enthralls as Charlotte, who goes behind enemy lines while keeping secret her personal mission to find her lover, an RAF pilot downed over France.

amy bownReviewed in the United States on July 4, 2017
5.0 out of 5 stars
A good-old fashioned romance and Billy is yummy.
Verified purchase
This is the kind of movie they just don't make anymore. A sweeping, wartime romance with great acting, beautiful scenery, two gorgeous leads, and a happy ending (for once). Charlotte becomes a secret agent in France with a mind to finding her missing pilot boyfriend who was shot down. But then she meets Billy Crudup and his fabulous bone structure, and the rest is history. Michael Gambon was wonderful in this. And though the story is somewhat predictable, the acting is superb. Blanchett, Crudup, and Gambon are three of the greatest actors on the planet, and Gillian Armstrong directed, so you really can't go wrong. I guess you'd call it the ultimate "chick flick"--but to me, that's not an insult. It's a great rainy-day escape movie about love and duty and honor and lovely Billy's chiseled cheekbones. What's not to like?
21 people found this helpful

Victorian CatmomReviewed in the United States on September 18, 2017
5.0 out of 5 stars
Stays with you
Verified purchase
I love Cate Blanchett and almost everything she's in. Good or bad, her movies always stay with you. This is a great movie, one reason being it's based on actual people. The costumes/settings are gorgeous even though it's war. The back-stories (the children, and the father/son relationship of one of the main characters) are compelling. The tension when there's danger is so well-done. Cate and Billy Crudup are excellent. They are always just one step ahead of the very dangerous game and sometimes don't even know if the can trust each other.
I recommend this for anyone who wants to see true courage.
17 people found this helpful

marcy wenkeReviewed in the United States on August 2, 2020
5.0 out of 5 stars
Entertaining.
Verified purchase
A very fine film. I enjoy WW2 films that are historical and have some romance....this film is both. Good acting, the story is believable and the price is right. Although, this film is almost 20 years old... isn't it time it should be n/c.?
6 people found this helpful

Elle Shopper LadyReviewed in the United States on June 13, 2021
5.0 out of 5 stars
Early Cate Blanchett and France and Amazing Billy Crudup okey dokey!
Verified purchase
I bought this film and do not buy all that many.

YES - This wonderful WWII story of the brave people of France and England marked my first acquaintance with Cate Blanchett's work, and so when her name appeared on the much-awaited LOTR premier, I cheered! Who else could do justice to Galadriel! A really fine story, given a quality presentation.

In fact, I enjoyed the film this weekend and smiled - the monologue she shares at the beginning of "Charlotte Gray" is so similar to the never-to-be-forgotten one she shares at the outset of LOTR -the Fellowship! Do you suppose the one inspired the other? And in which order, since both films date to 2001?

It was just so easy to engage with the story and the charming characters and sets and actions - full of vitamins for viewers.

The production skills were top-notch in Charlotte Gray and the first time I viewed this film in 2001, I'd was done with a phase of too much response work, so I reallllly earned all the chick-flicks I'd like.

The war story. helped me put my humble "bit" in its place and to recover faster, I think.
BECAUSE I am an artist,
the beauty of the countryside and
the costumes and colors and
the grace in performances

Do you think most women experience a "no turning back" moment as does Charlotte Gray? I cannot say more on this without spoiler-ing. But enjoy the film and see what you think.

I loved M. Gambon in "Maigret" and he did not let us down in this one either.
So satisfying to see a few of the badguys get their just desserts, too!

The children were important to the plot - not a complication but a strong contribution to the truth of those days.
They remind us that it is not about just grownup games, but about all that we treasure in life.

Parallel:
As we phase out of the covid pandemic, we realize that when all the numbers are in, the death tool will match the WWII Holocaust, and may exceed it.
So I found in my viewing today, a help to my spirit and hope and the TRIUMPH of LIFE over death in this movie.

People remained WORTHY, though some failed completely and all faltered a bit.
They laughed and loved and believed and realized that challenge is opportunity to do our very best and so win the "great day in the morning" promised to believers.

The makers insist:
It's just a chick flick and they went out of their way to show us that staying real about it all and NOT living a lament helped to win the moment.
Going on to a better day is the thing after all! Joyfully if possible!

I think these people earn their money.....most of the time :-D

IN my case,
Just before I found "Charlotte Gray" , an Accident immobilized me and, though I'd loved being tv-less for almost a decade, by choice, I was going to be "in" for some time - so I bought a tv/dvdplayer/vcr with all the bells and whistles and followed orders to "Be still and wait upon the Lord"

The first week could have been better - as I woke to the tv's alarm, and tuned into the morning news for coffee company in my disabled ladies bungalow, the Japanese animation on the screen was not animation but live video of the collapsing TwinTowers on Nineleven!

I did some things I could do to help - created a huge flag, promo-ed "occupant safety and escape technology" and better attack Preparedness, but I was disabled and so I stuck to my Rosary project and film. Starting the Rosary in September it was Thanksgiving before I'd dedicated one bead for each life lost on Nineleven - Stunning horror and Wildly difficult days demanded good acts as possible - I Painted "Dan, George and Bill - raising the flag at ground zero 9/11/2001" into a shadow box for a school in California. It's what I do.

Then it was time to take a quieter place again, so .Praise God that I could pile on the videos!

Cate Blanchett has been a favorite ever since!

Stories like "Charlotte Gray". empowered winning thinking for the human spirit and so I do hope to see more like this to help us self-restore from Covid - in all the sneaky small ways that run the bigstuff! Films about the losses of Covid, will only be tolerable if served up with truth - sharing the endless heroics that saved us all - in every place in society people said NO to losing to covid and its afflictions on us. And so we are here - vaccinated - and victorious if we aim it so!

Thanks film for doing your part.

Peter Olson, and I am realReviewed in the United States on August 1, 2017
5.0 out of 5 stars
Blanchet shines in this WWII spy hriller
Verified purchase
An early Kate Blanchett movie, and it is a good one. She dazzles as a spy in France sent by the English. She had hopes to find her boyfriend a flier who was downed by the Germans. Very good plot. I don't ant to give it away. Good supporting cast. One of the best WWII films I have seen.
9 people found this helpful

Robin F. KatzReviewed in the United States on May 10, 2021
5.0 out of 5 stars
A Nazi WW2 film that is poignant and beautiful in every way
Verified purchase
This Nazi WW2 film set in England and France delivers all the gifts of a great movie: It has several intriguing and inspiring stories that intertwine ---including a storyline with two engaging little boys. In addition, the actors are all top-notch, with equally masterful costumes and set designs along with gorgeous scenery. Best of all, the main characters are clearly shown to be achieving personal growth in response to unspeakably tragic wartime experiences. I loved everything about this beautiful and poignant film! Five stars!

YACReviewed in the United States on January 23, 2020
3.0 out of 5 stars
Blanchett always good to watch
Verified purchase
I liked it, especially Michael Gambon. The film is based on a novel, everything fictitious as stated at the end. It only gives us a glimpse about the real existence of female spies and just sets the stage for another war-love story, albeit with some lovely authentic French countryside background.
2 people found this helpful

Brittney ReedReviewed in the United States on December 18, 2002
5.0 out of 5 stars
A War Movie that Focuses on the People
Verified purchase
Do not buy this movie if you love battle scenes and action, action, and more action in your war movies. If you have a thing for gore and carnage, you will be very disappointed.
The main focus of this movie is not the war in itself, but the effects of the war on people's lives, which is the only reason I have a thing for war stories. It is amazing to see ordinary people transformed into courageous heroes just for survival.
This story is mainly a romance, in my opinion. Charlotte is willing to risk her life to travel to France in search of her lover, a pilot who went down over France and who is now trapped in its borders. But she is distracted from her mission by the plight of two little Jewish boys whose parents have been arrested. She and a handsome ally take the boys into hiding and care for them. But there are spies and informers everywhere who are more than willing to betray their former friends and neighbors. Charlotte finds her loyalties torn between two countries, two identities, and two men.
It was a lovely movie with great acting, a wonderful plot, breathtaking scenery, and best of all, it ends like it should. I would give it more than five stars, if I could.
14 people found this helpful
See all reviews
Back to top
Get to Know Us
Make Money with Us
Amazon Payment Products
Let Us Help You
EnglishChoose a language for shopping. United StatesChoose a country/region for shopping.
© 1996-2021, Amazon.com, Inc. or its affiliates