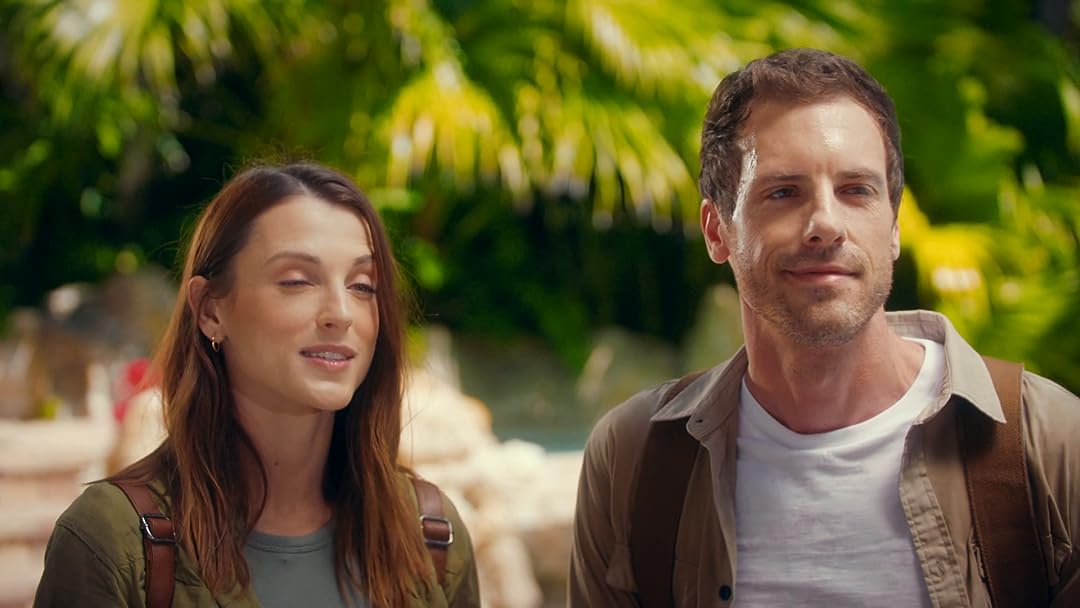 (5)
5.71 h 29 min2020G
Maddie, an art historian, travels around the world to find the Lovers Stone, but when she meets Fitz, her search may lead to true love after all. TV-G

KristenReviewed in the United States on September 13, 2021
2.0 out of 5 stars
Cheesy & Unrealistic
Verified purchase
I'm not sure how this movie has good reviews. I thought it was pretty bad from start to finish. The scenery is lovely and it may be good for someone preteen but that's about all the good I can say. There are so many plot holes. I'll just go with the most glaring. The archaeologist takes the irreplaceable book that leads to a stone worth millions in her carry on. She doesn't make a copy but a precious document from the 1700s, she takes with her. That's just the tip of the iceberg. There is no chemistry whatsoever b/t the male and female lead. This one was a complete miss for me.

Perry M WhiteReviewed in the United States on June 28, 2021
4.0 out of 5 stars
Caribbean Love
Verified purchase
Nothing sexier than a girl with muscles.....after a fashion. Leopard top? Wedges'? Cute love story in a beautiful setting but work out girl too much for me.

Now The End BeginsReviewed in the United States on July 24, 2021
4.0 out of 5 stars
Filmed In Saint Augustine Florida
Verified purchase
Pleasant but totally predictable "Hallmark" movie, but something curious in the credits. The bulk of this movie was filmed in my town of Saint Augustine, Florida, America's oldest city, and YET the credits say it was filmed in Broward County, totally not true.

Amazon CustomerReviewed in the United States on June 26, 2021
5.0 out of 5 stars
beautiful
Verified purchase
charming love story on a beautiful island.

H. BalaReviewed in the United States on July 18, 2021
4.0 out of 5 stars
movie that entices me to snorkel and paddle board but maybe hold off on the falling in love
The Charm of Love is okay. Two years ago, Pearl in Paradise did it better, plus the two leads there were better. But 3.5 out of 5 stars for The Charm of Love. And a **plot spoiler** alert now.

It's mostly about Dr. Madison "Maddie" Turner (Katrina Norman), an accomplished art historian who works at a museum funded by Harland University, "funded" being the key word, as in past tense. The museum staff has just learned that the university has cut their funding.

There's a light thru the tunnel. It's a big ask of Maddie. A philanthropist benefactor has promised to fully endow the museum but only if Maddie can unearth a missing legendary artifact in time for his 25th anniversary of marriage to his wife.

As a clue, he's provided Maddie with a crumbling diary that dates back to 1796 and is an account of the fabled Lover's Stone of the island of Cordecil. The mystical stone is said to glow blue in the presence of true love.

The diary contains navigational points, descriptions, and illustrations that just may lead the discerning reader to the stone's whereabouts. There's Maddie off to pack for the Caribbean island of Cordecil.

On the island, a lost Maddie is looking for her bed and breakfast when she receives a wet welcome. Not that our boy, Fitz, meant to dump nasty mop water on her head. He just didn't see her. You may ask what international hotelier and activist Andrew Fitzpatrick (Tilky Jones) is doing getting his hands dirty? Normally based in his New York office, Fitz has traveled the world erecting luxury hotels and working with cities to revive impoverished neighborhoods. Which now begs the question: Which is the bigger myth? The Lover's Stone or Fitz? Oh, cynical me.

Thing is, Fitz harbors a special love for the island - he styles himself its "cultural ambassador" - and love for this particular bed and breakfast. And since the b&b is currently only half-staffed - what with old girl Alodia's bum leg having placed her on light duty - Fitz has stepped in to do some of the housekeeping.

Not that Maggie appreciates Fitz's largesse. Then, again, no one enjoys a bucket of disgusting mop water poured on their noggin. Luckily for us, the animosity doesn't get stretched out. Maggie accepts Fitz's apology, and they move on.

Accustomed to the mechanics of rom-com, you and I aren't surprised that the plot keeps throwing these two together, never mind that she's super-focused on her farfetched quest and he... well, he's on island time. Our inner prognosticator alerts us that Fitz would constantly try to get Maggie to take a break while Maggie would be prone to saying brainy stuff like "The inclusion of shapes and symbols common in pre-Columbian petroglyphs - it's what really ties the ancient and the modern."

Not only has Fitz made himself part of the staff at the b&b, he also serves as the local tour guide. (It's cute that the fire department and the tour service share the same truck - just slap on the appropriate decal.) At some point, Fitz moves past being Maggie's guide and becomes her partner-in-crime in her treasure hunt. At some point, Fitz realizes the value of finding the Lover's Stone, how it may drum up tourism for the island. Doesn't matter that Fitz doesn't believe in the magic or existence of the stone. He's one of them pragmatic folks who cites love as merely a combination of chemicals swirling around in the brain. Surprisingly, it's the studious academic who is the romantic. Maggie posits that love is the greatest force on earth.

Fitz is lugging around one more bit of baggage. His business manager and girlfriend, Trina (Milly Fuguereo), has gotten another job offer. He's mulling over asking her to marry him when he gets back to New York. I'd never seen a guy less excited to propose.

You can watch this movie and soak in the stunning vistas. This must've been an amazing location shoot, wherever it was. Anytime you can marry activities like paddle boarding, snorkeling, and hiking thru scenic landscapes to the plot, you make me want to renew my passport. The premise is one of those timeless classics that promise fun and adventure. And the very-well-put-together Katrina Norman gets to show off her toned legs, her character wears hiking shorts so often.

It makes sense. When on a quest for a missing relic, you wear hiking outfits. And Katrina looks very good getting her Lara Croft on. I blame the screenplay and the showrunners for introducing stupidity into the movie. Sure, Maggie does wryly comment on her museum friend packing her those impractical heeled platform boots, except Maggie could've chosen not to wear those. And here's a continuity break. At some point, Maggie veers away from the group tour and sets off on her own. Her impractical boots having taken on water, she takes one boot off to pour the agua out. But a second later, a snake surprises her and Maggie takes off running... with both boots on.

But I thought Katrina Norman was good. I had some issues with the lead guy, Tilky Jones, whom I describe as a better-looking Ben Stiller. Tilky started out being quite likable but became less so as the movie went on, and I put that on the screenplay and its bad character choices. And if you routinely watch these Hallmark-type rom-coms, be prepared for the banter to be inadequate and the sappy dialogue to feel forced. Such as when Maggie remarks that she's thinking of writing a book about all the versions of the Lover's Stone myth, Fitz's response: "Maybe we can add our love to the story." Oh, barf.

Another thing I noticed is that this movie is littered with idiot bosses. Just how dumb is the island's mayor? And, of course, do expect the last-minute dramatic conflict to pop up to juice up the last fifteen minutes of the movie. This one is particularly aggravating as it compels Fitz to have a knee-jerk reaction - or is it just a jerk reaction? - in which he accuses Maggie of something she didn't do and, then, storms off without allowing her to explain herself. Anyway, watch this one if your agenda is to take in romantic tropical backdrops, each scene looking like it could pass for a postcard. As for the love story, it started out promisingly enough, but then the last fifteen minutes ruined it for me.