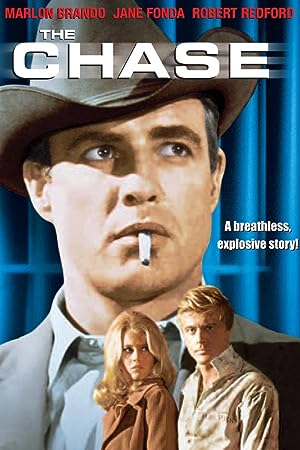 (295)
7.12 h 13 min196613+
This steamy pot-boiler follows the intrigues surrounding an escaped convict who attempts to return to the small southern town where he was raised. THE CHASE boasts Brando as a disillusioned sheriff, Dickinson as his unhappy wife, Redford as the wrongly convicted criminal and Fonda as his misbehavedwife.

Roger HowertonReviewed in the United States on July 10, 2021
2.0 out of 5 stars
Film Misses Potential
Verified purchase
This review is for the 1966 film, transferred to DVD by Sony Pictures/Mill Creek (which is a beautiful, very colorful transfer).

Well, talk about fizzled potential! This movie was produced by Sam Spiegel, scripted by Lillian Hellman, directed by Arthur Penn and starred Brando, Fonda & Redford with support from Angie Dickinson, Miriam Hopkins, James Fox and Robert Duvall, based on the novel by Horton Foote. Should have been a great film, right? Yes!

But it certainly missed the mark, and I blame the script.

It was the mid-60s and the film tried to push the envelope for sexual promiscuity, violence (Penn's next film was Bonnie & Clyde) and sensational murder, but Hellman forgot to make the characters and their motives believable. Their actions just don't add up.

It was also a big goof to set the action in a West Texas town but use dialogue and plot more suited for Mississippi.

The title also seems to be a misnomer because this film doesn't focus on the hunt for escaped convict Bubber Reeves (Robert Redford), but on the actions of the townspeople when they learn that Reeves is loose and headed back to town.

So if you never saw this film, don't rush out to Chase it down. Let this one get away.

I. M. IconoclastReviewed in the United States on June 5, 2019
5.0 out of 5 stars
Riveting movie with excellent special effects on Brando's make up after getting beat up!
Verified purchase
This movie is a great study in the degeneracy of people and the thin line of protection that law enforcement provides. The characterization of people from the southern U.S. being a bunch of degenerate slobs is intentional to denigrate that portion of the country which is often referred to as the Bible belt. You'll be hard pressed to find a movie coming out of Hollywood that doesn't have a political message - some more subtle than this one.
4 people found this helpful

Lynda R. PykeReviewed in the United States on August 1, 2019
5.0 out of 5 stars
Love this Film
Verified purchase
This is great soap. It was panned as a film with a great cast and a poor screenplay. That's true, but I still like it because of the cast. IT is directed by Arthur Penn, Jane Fonda in the worst acted role I have ever seen her in. Very early Robert Duval, Robert Redford, James Fox, Angie Dickinson, E.G. Marshall, Martha Hyer, Janice Rule Diana Hyland and a very young Paul Williams (Evergreen); the list goes on and on. A bit (?) corny but.......
3 people found this helpful

R. GuentherReviewed in the United States on June 2, 2015
5.0 out of 5 stars
A Rarely Shown Brando Movie
Verified purchase
For some reason this movie is only rarely shown on television even though it has one of the greatest casts ever assembled.
Marlon Brando plays the reluctant, disillusioned, sheriff of a small southern town where the townsfolk party like maniacs and have so little respect for the law that several of them enjoy beating up the sheriff within an inch of his life. So many of the men in the town are rabid racists that it is uncomfortable and disturbing to watch at times. Pretty boy Robert Redford as "Bubba Reeves" escapes from prison, but he somehow never looks very uncomfortable, even though he has nothing but the prison clothes on his back. Come on Mr. Redford, at least get a little dirty and hungry once in a while! The crazy out of control townsfolk make a party and a celebration of hunting down the escaped convict. They bring so many roman candles to the huge junkyard of wrecked cars where "Bubba" is hiding that it is turned into a giant inferno. That is pretty exciting to watch.Those people are quite immoral and lecherously chase each other's wives around during a wild drunken decadent party. It is a sad commentary on human behavior indeed, but go ahead and check it out anyway for the great cast.
15 people found this helpful

David E. BaldwinReviewed in the United States on January 29, 2006
4.0 out of 5 stars
Semi-Thrilling Thriller
Verified purchase
"The Chase" is a letdown only if you consider the starpower in front of and behind the camera. If I'm not mistaken, there was notorious wrangling behind the scenes between director Arthur Penn, scriptwriter Lillian Hellman, and producer Sam Spiegel. Usually when you have that kind of backstage melodrama the result on the screen is a mess of a film. That's not the case with "The Chase". The film deliberately takes it's time establishing the psychological make-up of the small sleepy town. Inject into that the word that the town's least favorite son has escaped from the pen and fireworks erupt. The lead up to the explosive finale is thrilling but lacks the resonance to make "The Chase" a classic film. See the film for the terrific performances not the least from star Marlon Brando in a laidback performance that isn't the least bit method as the town sheriff trying to keep the cork on the potential exploding powderkeg. Robert Redford as the escaped con and Jane Fonda as his cheating spouse give performances to suggest the better things to come. Also noteworthy is Robert Duvall and Janice Rule as a cuckold and his promiscuous spouse.
14 people found this helpful

Kenny HewittReviewed in the United States on October 15, 2021
5.0 out of 5 stars
From my Youth !
Verified purchase
I have seen this movie over my lifetime since it came out in the 60’s in my youth. Although I’m no fan of Jane Fonda and her underhanded betrayal of our POW’s during the Viet Nam war , I soon forgot about her and enjoyed this movie once again. Just like I remember it !

C SnyderReviewed in the United States on February 17, 2021
5.0 out of 5 stars
Good Brando Film
Verified purchase
While this movie is a bit underrated for a Marlon Brando film, it is by all accounts a really good one. If you're a Brando fan, I'm betting you will enjoy it. The movie also has some good turn outs from Robert Redford, Jan Fonda, Robert Duvall, and Angie Dickinson.

Robert ByrdReviewed in the United States on August 28, 2017
5.0 out of 5 stars
Great Film!
Verified purchase
Saw this film back in the 80's and it really stuck with me. It's a bit soap operas, but I didn't mind. The cast is stellar and the subject matter intense. You can't go wrong watching what I consider one of Brando's better films.
6 people found this helpful
See all reviews
Back to top
Get to Know Us
Make Money with Us
Amazon Payment Products
Let Us Help You
EnglishChoose a language for shopping. United StatesChoose a country/region for shopping.
© 1996-2022, Amazon.com, Inc. or its affiliates