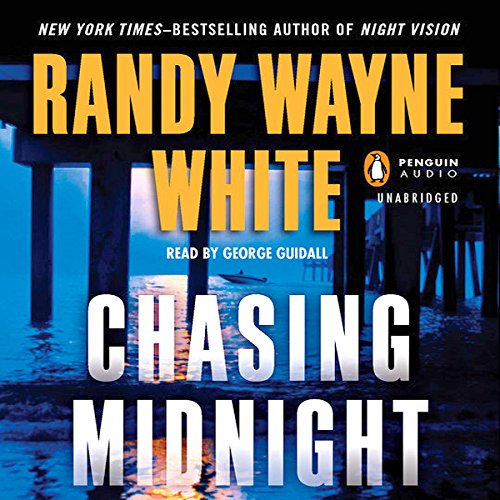 It began peacefully enough, on one of Florida's private islands. At a reception hosted by a notorious Russian black marketeer, Doc Ford uses darkness, and his friend Tomlinson, as cover to get an underwater look at the billionaire's yacht. By the time Ford surfaces, everything has changed. Environmental extremists have taken control of the island. Or are they thugs hired by the Russian's competitors? Whatever the motive, they have herded everyone together and threatened to kill one hostage every hour until midnight unless their demands are met - at which point they will just blow everybody up.

Electronic jammers make communications with the outside world impossible. The only hope of avoiding terrible consequences: The militants do not know Ford's capabilities, or that he is still on the loose. But that situation won't last for long... and the clock is ticking.

Special invitation from Audible!
Learn more about Membership
List Price: $28.00
You Save: $4.01 (14%)
By completing your purchase, you agree to Audible’s Conditions Of Use
Sold and delivered by Audible, an Amazon company
Share

4.1 out of 5 stars
4.1 out of 5
399 global ratings
How are ratings calculated?
To calculate the overall star rating and percentage breakdown by star, we don’t use a simple average. Instead, our system considers things like how recent a review is and if the reviewer bought the item on Amazon. It also analyzes reviews to verify trustworthiness.
Top reviews

Clint Potts
2.0 out of 5 stars Marine Biologist Doc Ford has jumped the shark
Reviewed in the United States on March 22, 2012
Verified Purchase
I have been a Randy Wayne White fan for years. As a frequent visitor to Ft. Myers and Sanibel Island, I loved the rich depiction of the southwest Florida that I know and love, recognizing the locations from fishing trips with local guides and my own explorations with my family. The Florida setting was perfect for our mysterious marine biologist with a dark history that he couldn't quite escape. I was always amazed that Randy could keep the excitement relevant, novel after novel after novel. Well, he's run out of ideas, folks! Now his entire novel spans a totality of 1-2 days in the life of super-spy Doc Ford, while Doc spends most of the book pondering and remembering his technical exploits in marine biology and weaponry. In sitcom terms, Doc Ford has "jumped the shark". "Tampa Burn" was the last decent Doc Ford novel. I'm quite sure that Randy will continue to honor his publishing agreements and crank out another book each year or so, but I think I'm done. All that is left is to hire a slew of partner novelists like Tom Clancy did and start milking the Randy Wayne White brand.

Page after page of Chasing Midnight was just laborious. This isn't even as good as early Striker novels published under a pseudonym.

When I'm next in Florida, I'll still stop in at Doc Ford's Rum Bar and Grille, hoping to remember that original cherry high, but I'm afraid all I'll find is a decent grouper sandwich. Doc Ford is gone. He jumped the shark.
Read more
17 people found this helpful
Helpful
Report abuse

William Lander
5.0 out of 5 stars Doc Ford, a man if action, science and mystery
Reviewed in the United States on July 31, 2016
Verified Purchase
The "Doc Ford Novels" have fast become one our favorite series. Well written, with interesting, consistent characters as the interact with a variety of people who come in and out of their lives for good and or bad purposes.

this book particularly shows a deeper look at the main stay characters, and introduces a whole new set of people who will stop at nothing to get what they want in their little world.
The narrator in the series of books on CD get's your attention fast and keeps you in the story. usually by the first few lines we are hooked and sometimes don't want to stop our road trip for the day because we want to hear how Doc figured it all out.
give it try. We are sure you will be pleased.
Read more
Helpful
Report abuse

Golf Nut
4.0 out of 5 stars I may know more about caviar than expected..
Reviewed in the United States on October 30, 2020
Verified Purchase
Sooo what did I think? Well it was a long ride. Sometimes the background data history and science can get a little tedious along with extensive psycho analysis. Sometimes I just have to jump to the next paragraph thinking blah blah blah. But I've learned that most of the book is analysis and not action. Mom stop action would get tedious also. So ya gotta ask why was Tomleson invited anyway and why were the ecoterrorists allowed to stay. Oh well I'm glad Ford appreciates Whalers now...😁
Read more
Helpful
Report abuse

Cowboy
1.0 out of 5 stars White's Best Work Just May Be Behind Him
Reviewed in the United States on May 14, 2012
Verified Purchase
Don't you just hate it when you struggle all the way through a book, thinking that sooner or later it's just got to get better. That on the next page, or at least the next one after that, something interesting or engaging just has to happen. But when you've finally completed the final agonizing page, nothing ever has (happened that is) and you've painfully resisted the almost ovepowering urge to just walk away from that dog for absolutely nothing in return? Like other reviwers, I've long enjoyed Doc Ford and his world, but this book disapoionted me about as much as my visit this past july to Doc Ford's Rum Bar on Sanibel Island. This novel is like a movie that is one long car chase with no dialogue or discernible plot. This is the literary equivalent of one long cage fight.

It's funny about authors. It seems that most of them come to us with just so many good books in them. For some, it's just one, but that one is so powerful that their name is remembered forever. For most of them, the magic number is between three and, maybe, eight. Jim Harrison comes to mind as an individual who continues to every few years crank out a major work...maybe our best contemporary novelist. And there are others in that vein. Cormack McCarthy comes also to mind, though his last one was pretty painful to read. And of course, Elmore Leonard can't seem to write a bad story even if they are not filled with earth shattering insights into human affairs. Stephen King has franchised himself like a hamburger stand, but nobody has ever done kids or dogs any better, and he still does.

White has produced a real trove of enjoyable light fiction...even though I get pretty tired of the shameless product placement stuff...but if he has any more good yarns in him, he needs to get them out or leave the writing trade to others. Randy, we won't buy and read just any piece of crap, and shame on you for trying to foist it on us.

Oh, and Doc Ford's Rum Bar? It's nothing more than a sports bar and not a very good one at that. We enjoyed Sanibel and I credit Randy for getting us there, but there's a better sports bar with a better menu three blocks from my house. We didn't need to drive to Florida for a sodden lunch in a dreary shed.
Read more
3 people found this helpful
Helpful
Report abuse

Amazon Customer
3.0 out of 5 stars Chasing Midnight: Not enjoyable for me.
Reviewed in the United States on March 5, 2017
Verified Purchase
This is a wild story with lots of action including some boat chases and shootings. There were too many people in the story: three bad foreign billionaires and their bodyguards with strange names, four or five radical ecologists including some with strange names, a couple of foreign women with strange names. Other readers might like it but I could not get to the end fast enough. The long discussions about beluga sturgeon roe and caviar was tedious and boring.
Read more
One person found this helpful
Helpful
Report abuse
See all reviews

BOBBYD
5.0 out of 5 stars Five Stars
Reviewed in Canada on January 11, 2016
Verified Purchase
great storyteller
Read more
Report abuse
See all reviews
Back to top
Get to Know Us
Make Money with Us
Amazon Payment Products
Let Us Help You
EnglishChoose a language for shopping. United StatesChoose a country/region for shopping.
© 1996-2021, Amazon.com, Inc. or its affiliates