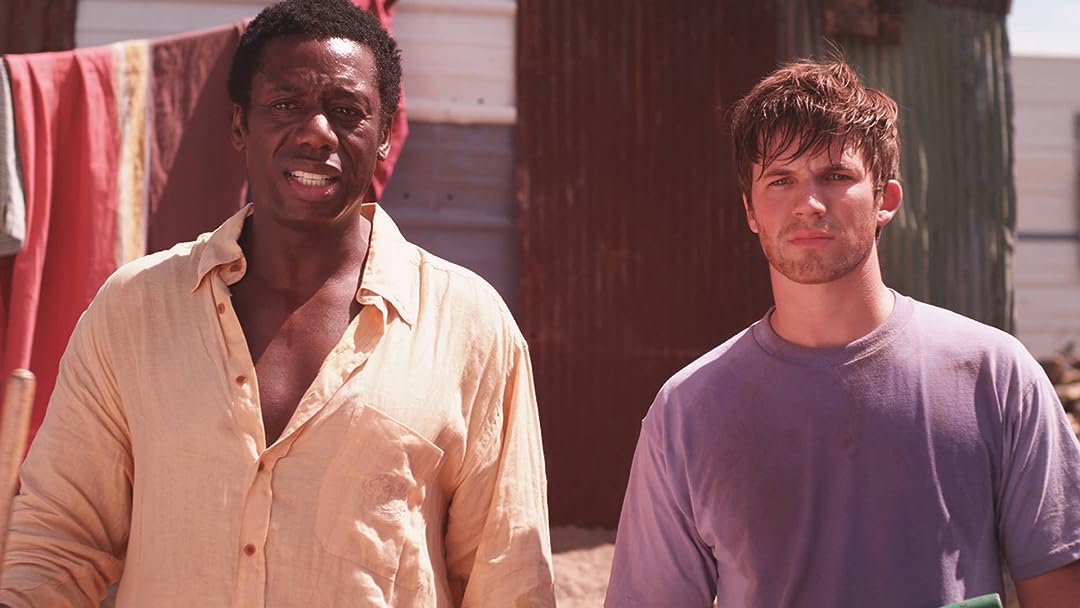 (99)
1 h 56 min202013+
A shy photographer desperately tries to fit in and hold on to the decent life he seems to have. But when tragedy suddenly befalls him, his unresolved past begins unraveling. As he struggles to cope, he becomes increasingly fearful that something (or someone) must be inflicting ruthless suffering on some people more than others, and he plans an escape.

Kindle CustomerReviewed in the United States on December 19, 2020
5.0 out of 5 stars
Amazing, entertaining and relevant
Verified purchase
It’s funny, unexpected, artistically well-told... Feels fresh and unlike other things I’ve seen... What a well cast film! Matt Lanter gives the performance of his career, showing us a character type I’ve not seen in films before. Eric Tiede is amazing, has such nuance in his delivery, and regularly had me laughing out loud. Hallee Hirsh perfectly embodies an eccentric, breath-of-fresh-air beauty who personifies grace. Yetide is wonderful and her performance gave me chills! I could go down the list of actors- Hakeem, William, and the rest- and talk about their AMAZING performances!... The characters are 3 dimensional, unique, and not Hollywood’s formulaic depiction of types... movie defies genres: drama, comedy, suspense, romance, and more... This film feels TRUE: it deals with the way things really are in the world and tells a story that we can all place ourselves in. It’s given me hope amidst a long season of drought. This film is like a compass that points me toward true north amidst the craziness of the world in 2020. It will help guide my responses to losses I’ve experienced (or will in the future)... In my top 10 most thought provoking films. I’m telling my friends about it!
10 people found this helpful

Noah DirksReviewed in the United States on December 21, 2020
5.0 out of 5 stars
Gritty, real performances with the perfect touch of humor to lighten truly tough topics.
Verified purchase
Creative writing brings insights that will stick with you, original music you'll want for your own playlists, and impressive camera work to have anyone wondering how it was done on the low budget of an indie film!

Can't get this line out of my head! ....
“I don’t know why some people suffer through drought longer than others, but the rain always comes eventually. And when it does, the desperate, barren, thirsty earth quenches itself in a way that the lush, green earth could never imagine or understand. And I have to live in this tension because that is where the fire is.”

TheDangsReviewed in the United States on April 5, 2021
1.0 out of 5 stars
Don't be fooled, this is a TRASH MOVIE, with TRASH ACTING and TRASH WIGS
Verified purchase
The trailer makes it out to be more than it is, but essentially, its some dude wailing for two hours, being a complete jerk to everyone around him because he got some mysterious illness that causes him to go blind and become weak - nevertheless, he seems to see just fine, at certain points in the movie. It is as if the editors forgot he had this illness. The creative director of the movie should have used some of the money for some better wigs, than on the overly, out-of-place melodramatic music. Amazon Video makes it seem like its 4.3 out of 5 stars, but look on IMDB and its 4.3 out of 10 stars. It is two hours wasted that you can never get back. This is on par with The Grey.

CindyReviewed in the United States on January 2, 2021
1.0 out of 5 stars
Depressing as hell
Verified purchase
If you want to watch the most depressing movie ever, this is your movie. It doesn't follow the natural plot progression either, it tells you the end and then backfills. I'm so mad that the writer didn't find it within himself to let the guy find his dog that was stolen either. What a crock of crap. I'm so mad I watched this depressing movie. Total waste of time.
6 people found this helpful

WoodyReviewed in the United States on April 9, 2021
4.0 out of 5 stars
Powerful, but...
Verified purchase
This is a powerful, moving, well-acted story. Matt Lanter was outstanding. The movie is depressing at times, but has a satisfying conclusion. It is interesting how the protagonist wished he was an atheist but could not help but believe in God even though he didn't want to. There is certain proof of God's existence all around us. The lead character has a strong passion to help others in need. A tremendous quality. Life is unfair, life is tough, this world is cursed. But that does not mean God does not exist. I would have given this movie 5 plus stars, but what I despise, is profaning and blaspheming the name of God. It was near the end and I almost stopped watching. Rain falls on the just and the unjust. Everything we have is because of the grace of God.
3 people found this helpful

TReviewed in the United States on March 20, 2021
1.0 out of 5 stars
Really not very good
Verified purchase
It's not easy to make a good film. This is not a good film. The script is absolutely terrible. One example: "She invited me to come to her house to meet her parents on Thursday for Thanksgiving"... And it just goes on and on like that, and it's tacky and annoying and fake. It's like it's on a script writing level of maybe a college freshman. I like to think it's a bit better than what high school kids could write.

From what I watched (20mins is all I could do) the whole film focuses on the doe-eyed young guy that is really trying hard to be some kind of version of Ashton Kutcher. I am not an Ashton Kutcher fan, but that's besides the point. This is not a good film. Who is rating this thing so high?
2 people found this helpful

Logain UT AblarReviewed in the United States on October 6, 2021
5.0 out of 5 stars
Excellent
Verified purchase
Chasing The Rain is a superbly written and directed film with a really great cast. Initially, I didn't like the lead Eric (Matt Lanter) because he came off as a real jerk to Vanessa (Hallee Hirsh). Worse, his indecisiveness and flaky nature wasn't explained at all during the first half of the film that made Eric even more unlikable. Vanessa on the other hand seemed like a really nice woman who was generally interested in him but Eric kept pushing her away for seemingly no reason.

But in a masterclass example of great writing, directing and character building, Chasing The Rain not only reveals the "whys" and "hows" of Eric and his behavior, which is truly devastating, the lead up to the ending truly sticks the landing in such a heartfelt way, the film is easily one of the two best films I've seen this year with Once Upon a Time in Miami being the other. There were some truly awesome karma moments in the second half that made me consider some instances in my own life. The true mark of great art is when it can inspire the audience to consider many things on a personal level.

I'll keep this brief to avoid spoilers but I recommend watching Chasing The Rain with a spouse, partner or with older children because there are some deep questions about karma, hope under dire circumstances, humanity and life in general presented in this film. Questions that can be lost in the current era chatter of idiot politics, excessive greed, abundant selfishness and blatant inconsideration. 5*

Rande BruhnReviewed in the United States on February 7, 2021
5.0 out of 5 stars
Gritty but true, that will tug at your heart,
Verified purchase
I loved this film because it provided an honest view of the suffering and loneliness that so many men in our culture experience, for many reasons, but which is typically given very little honest attention. For most men, its naturally and societally very difficult to show weakness and need, so they tend to suffer in silence. This film depicts that conundrum well, but it also highlights some very caring people who do try to help in honest ways. There is some comedy interwoven as well for a bit of relief from a tough story. Its a hard film to watch, with many tears, but tears well spent in the pursuit of trying to understand the heart of a young man in real crisis. The elements of his story revealed over the course of the film are the stories of many men i counseled over years as a volunteer and it brought back a lot of poignant memories. But the grittiness of things here is real and true, and reminded me of how much men in distress need persistent love, something our culture today generally misses. I also really liked the way the writer confronts the audience with a lot of the unanswerable questions brought on by serious suffering but doesn't try to answer them with trite-isms; life is just not that simple; and I felt like i wasn't being catered to. The film does lack some level of hope found in most stories like this, but i greatly respect the presentation, insofar as sometime hope is pretty scant. I will say the ending was a bit disappointing in that things wrapped up in a way that seemed a bit too tidy, a little trite. I suspect the film, in production for nearly 10 years, was rushed to conclusion to get it to market for the Christmas season and to take advantage of the year of angst called 2020. This ending did provide some emotional release from an intense story, but it felt a bit out of sync. Overall, however, this is a must-watch film; but just know that you will not be the same person afterward.
@randebruhn
2 people found this helpful
See all reviews
Back to top
Get to Know Us
Make Money with Us
Amazon Payment Products
Let Us Help You
EnglishChoose a language for shopping. United StatesChoose a country/region for shopping.
© 1996-2021, Amazon.com, Inc. or its affiliates