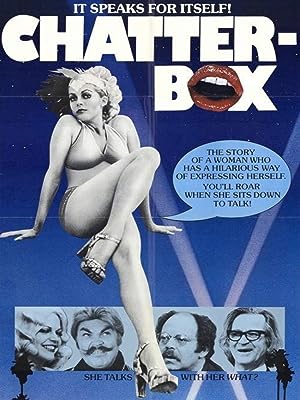 (50)
5.01 h 13 min1977R
A young woman who works in a beauty parlor discovers that she's become outspoken in a way she never thought possible, which causes her no end of trouble. Starring Candice Rialson and Rip Taylor.

David HarlanReviewed in the United States on November 28, 2018
2.0 out of 5 stars
Perfectly awful
Verified purchase
This is a bad movie. We watched it because it is a bad movie. Rip Taylor did not throw ANY confetti. That was my biggest disappointment with the film.

This movie has awful dialogue. Some of this dialogue comes in the form of jokes. They are horrible, horrible jokes. And there are a large number of them. Most of these jokes are told by the talking vagina. It was usually when the talking vagina told jokes that my friends would give me angry looks. I picked the movie.

The music was not good. It was the kind of music you'd expect to hear performed by an alien who had never actually heard music before and only had it described to him by someone who hates people who go to movies like this.

JayJayReviewed in the United States on July 5, 2019
5.0 out of 5 stars
Absolutely Ridiculous
Verified purchase
An absolutely ridiculous core theme carried out artfully, entertainingly, and with everything from nuanced comedy to the perectly over-the-top.

My wife wouldn't watch this one with me, perhaps understandably. The 70s were such a great decade for film (to be perfected in the 80s and it has been downhill since). People were still intelligent enough to write compelling movies, and they were pushing the envelope with every stroke of a pen - impossible when the world is run by PC SJWs.
5 people found this helpful

Mr. Muh4kin ExQuireReviewed in the United States on March 24, 2021
4.0 out of 5 stars
Ridiculous movie that I laughed at
Verified purchase
Completely silly, whimsical, and dumb funny exploitation movie about a talking and singing vagina that becomes a Hollywood star much to the despair of the person it's attached to due to it causing her problems with people around her

It was so ridiculous that premise that I just had to watch. I had an entertaining time watching this because the talking vagina I'd smart-alecky, foulmouthed, acerbic wisecracker from the jump that insults folks or makes jokes and innuendos in a Jewish new York island accent lol. I mean you can't get no more ridiculous than that!

Candace Rialson is pretty fame in this flick and she has a bit of nudity/topless scenes which apparently she didn't mind...and I'm gonna say I dont mind nudity wither but I felt that she was in a tad too many points where she was topless that wasn't really necessary toward the end.

HoopeeReviewed in the United States on September 6, 2012
4.0 out of 5 stars
Campy, hilarious, and a barrel of laughs.
Verified purchase
This is truly 'campy' movie that is in no way pornographic, though some might consider 'Virginia the talking Vagina' to be x rated or distastedul, it's a hilarious movie. Imagine if our genitals could talk and had their own mind to say whatever they want, whenever they want. As most adults know the thinking brain on our shoulders doesn't always match up with our sexual attraction down below. When I saw this move back in the 70's it had been marked under the name, 'Don't date a girl with four lips.' It took me a while to find it listed as "Chatterbox." It was a bit absurd when I first saw it in the 70's as I was much younger, however as I've gotten older, I found the 'campiness' of it to be truly funny. It's pretty funny when a talent agent calls a woman and then tells her to put "Virginia" on the phone and the woman slams the phone down bewteen her legs. The only thing that I was left wondering about was the first scenes involved Virginia speaking out for the first time and giving her assessment of the mail partner's endowment or sexual ability, causing him to recoil and break it off with the woman. Then at the end of the movie, it appears the woman is ready to jump to her death because of the life that Virginia (the talking Vagina) has created for her and caused her many problems. Suddenly on another cliff, another voice begins to sing. It's the man from the first sexual scene, and apparently his penis is now singing. They reunite and the movie suggests they live happily ever after. My question was about that. Did his penis learn to talk and sing while inside Virginia. Was this some sort of contagious anomale that he got from her that caused his penis to talk and sing also, or was it there all along and just never spoke up before the incident. But that's just the 1 minute ending. The over all movie was hilarious. If you're up for a great laugh and some extremely ridiculous scenarios, this is the movie for a great afternoon or evening at home.
7 people found this helpful

M. BrittonReviewed in the United States on June 30, 2013
4.0 out of 5 stars
This comedy needs a legit DVD release! This DVD-R looks good enough...
Verified purchase
After seeing a few Candice Rialson movies on DVD (Candy Stripe Nurses, Summer School Teachers, and Hollywood Boulevard) I really wanted to see her in something after Hollywood Boulevard. Candice really stepped up to the plate on that film (standing strong with Paul Bartel, Mary Woronov, and Dick Miller) in her "acting". So I took the risk in purchasing the movie she did in 1977 called Chatterbox. What a surprise comedy this is from one time gay porn director Tom DeSimone (Lancer Brooks to his gay fans) who would later bring us mainstream fans Reform School Girls and Hell Night. This movie is definitely drive-in fare from 1977 for its low quality.
The movie is burned onto DVD-R and looks pretty decent. Doesn't look like it was from videotape (like my copy of Summer School Teachers) because the image would be smeared more than it is. I was surprised to see this look as good as it does. There is even a main menu! Don't get that from videotape recordings. This is bare bones release of this 73 minute full frame movie (count how many times you see the boom mic, one time it almost hits an actress in the head!).
This is a hilarious movie about a woman with a talking vagina and hope one day a company will give this a legit release. I would love to see Shout Factory release this with Hollywood Boulevard, Summer School Teachers, and Mama's Dirty Girls. These four films with Candice Rialson would make a nice package.
7 people found this helpful

C J SReviewed in the United States on April 29, 2021
1.0 out of 5 stars
OMG
Verified purchase
Glad it was only 99 cent rental, as a dollar would have been to much! Remember from young years (high school) but never saw it! Really low budget for back in the day!

The ColonelReviewed in the United States on October 18, 2019
5.0 out of 5 stars
This is a Candice Rialson movie. If you know who she is this is reason enough to buy the DVD.
Verified purchase
This is one of the dumbest story lines in movie history but Candice Rialson is beautiful and nude in many scenes. This is the only reason to watch this movie and this s why I gave it 5 stars.

Angry AaronReviewed in the United States on February 3, 2020
2.0 out of 5 stars
potential done poorly
Verified purchase
the concept is amusing but used in a poor way. i guess you could call it adult raunchy comedy but it is more along the lines of a bad softcore
See all reviews
Back to top
Get to Know Us
Make Money with Us
Amazon Payment Products
Let Us Help You
EnglishChoose a language for shopping. United StatesChoose a country/region for shopping.
© 1996-2021, Amazon.com, Inc. or its affiliates