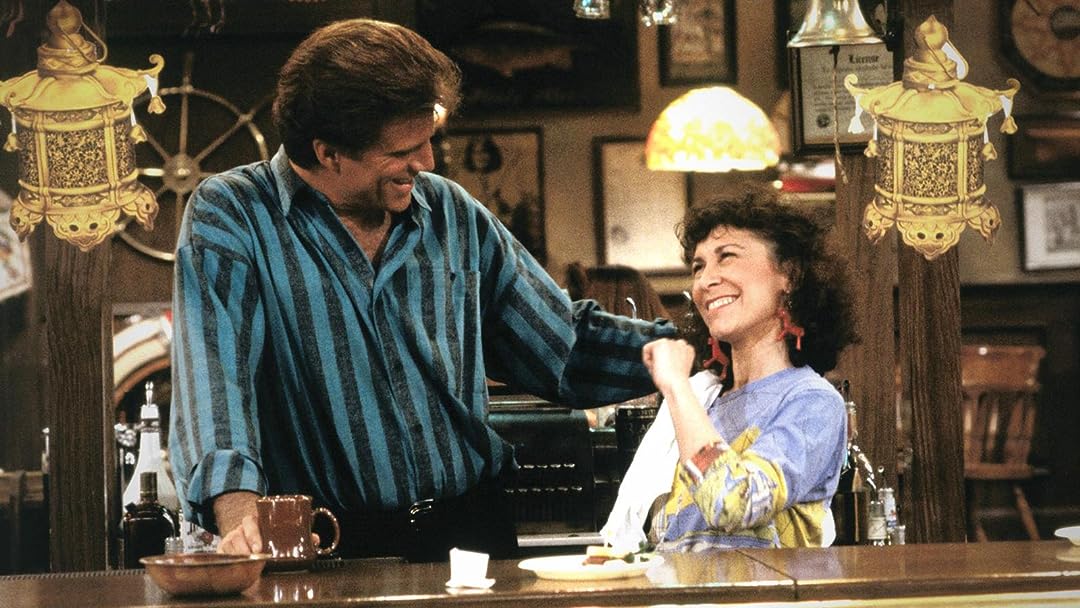 (418)
7.91988TV-PG
The classic Boston bar continues to thrive in Season 6 of hilarious episodes that find Sam Malone (Ted Danson) flat broke and back at Cheers (after selling the bar and buying a yacht that sank). Promptly, he clashes with the pub's new manager, Rebecca Howe (Kirstie Alley).

Made In The USA Reviewed in the United States on September 20, 2020
4.0 out of 5 stars
Cheers - season 6 - DVD - review
Verified purchase
4 stars overall for season 6 of Cheers.
.
4 stars for Woody Harrelson portrayal of "senior" bartender Woody Boyd. Hilarious character.
.
4 stars for Bebe Neuwirth portrayal of Dr. Lilith Sternin. Wish that her *underrated* character was in every episode.
.
Enjoyed the character Rebecca Howe portrayed by Kirstie Alley *twice as much* as the character Diane Chambers portrayed by Shelley Long.
.
Not a fan of the character Norm Peterson. Stereotypical character of a negative and despondent man, who hangs out at the bar avoiding his wife at home.
.

Austin David LillyReviewed in the United States on October 28, 2022
5.0 out of 5 stars
Absolutely Fantastic!
Verified purchase
God so loved the world that He gave His one and only Son. Anyone who believes in Him will not die but will have eternal life. John 3:16 NIRV

softball player's wifeReviewed in the United States on March 22, 2021
5.0 out of 5 stars
These shows never get old. They are just as funny the second time around.
Verified purchase
This is a night for laughter when you sit down to watch Cheers. I just ordered the last 4 episodes as a birthday gift for my husband. We have been to Cheers so we enjoy it even more.
One person found this helpful

Joshua SpauldingReviewed in the United States on February 21, 2006
4.0 out of 5 stars
Enter the neurotic Rebecca Howe
Verified purchase
The sixth season of Cheers saw the second major cast change in the history of the show. Only two years after Woody Harrelson's Woody Boyd replaced the beloved Coach, played by Nicholas Colasanto, Kirstie Alley stepped into the large shoes left by the departure of Shelley Long as season six began.

As a youngster, I didn't begin watching Cheers until the later years, thus I only remember Cheers with Rebecca, not Diane Chambers. Watching the first five seasons on DVD truly helped me appreciate the amazing chemistry between Ted Danson's Sam Malone and Long's Chambers. Surely everybody knew it would be tough to have that chemistry again, but viewers stuck with the show and it continued to be one of the top comedy shows on the air.

As the season begins, we find Woody and Carla (Rhea Perlman) still working at Cheers, but wearing goofy green and white striped shirts, as Sam has sold the bar to a large corporation and taken off on his boat after Diane left him. Norm (George Wendt), Cliff (John Ratzenberger) and Frasier (Kelsey Grammer) still inhabit their favorite watering hole, despite the changes.

However, after his boat sinks, Sam returns to Cheers, looking to go back to the glory days he enjoyed in his bar. Instead, he has to return first as a relief bartender, then as a full time bartender under the watchful eye of the new boss, Rebecca Howe.

Kirstie Alley truly shined in the role of Rebecca. Her neurotic and nervous behavior is absolutely perfect and she is able to get a great chemistry with Sam right away. It is obvious that Sam is into Rebecca, and the more she stays away, the harder he works to get to her. Rebecca's ridiculous crush on her boss (Played by Tom Skeritt) is a great story line and her constant snubbing of Sam makes for great television moments.

Of course Danson is still strong as former Major Leaguer Sam. He finds it humbling to return to the bar a broken man and takes the part time gig as a way to get back into the place that for so long, was his home. He eventually returns to the Sam viewers knew and loved, playing practical jokes on Gary's Old Towne Tavern and dutifully chasing every woman in Boston.

As Carla, Perlman is an entertainer. In this season, Carla is pregnant. Her and her new husband Eddie LeBec (Jay Thomas) welcome the baby and Carla also finds out that she is going to be a grandmother. Her constant barbing of Cliff is a riot and she takes to putting down Rebecca just as she did Diane for the previous five years.

Ratzenberger and Wendt, as Cliff and Norm, are the greatest barflies in the history of television. While neither will admit it, they are probably each other's best friends. Their crazy ideas and "interesting" conversations are what anyone would hope to find if they walked in to a random bar in the 1980s.

Harrelson continues his portrayal of the innocent Indiana farmboy turned bartender. Woody is one of the best character's on the show, simply because he is so simple and sees things as only black and white. HIs turn as Mark Twain in a local theater production is quite amusing.

Kelsey Grammer joins the regular cast as Dr. Frasier Crane, a psychologist who tends to spend too much time in Cheers. He brings a touch of upper class to the bar, yet at the same time, can fit right in with the guys. This season we get to know the love of his life, Lilith (Bebe Neuwirth) a little better, and the insight into that relationship provides a number of story lines.

Once again, as has been the case with the last few seasons, the one downside to this set is the lack of extras. Surely with the success that this show had, there must be some interviews and such that could be put together. I guess we'll just have to wait for other seasons to see if something comes along.
11 people found this helpful

Michelle LyonsReviewed in the United States on May 7, 2022
5.0 out of 5 stars
Perfect
Verified purchase
As described was a gift

K.L. CocKayneReviewed in the United States on July 10, 2013
5.0 out of 5 stars
A Kiss Is Just A Kiss According To Sam
Verified purchase
I remember some of Cheers when I was growing up, I was just a teenager when season six came out. I do remember this episode, it was hilarious, Ted Danson, Woody Harrleson, and Kristy Alley. These three were at there best in this one, if U want a great laugh I recommend this episode A Kiss Is Just A Kiss From Season 6 :).

shane hallReviewed in the United States on August 10, 2016
5.0 out of 5 stars
Fantastic show
Verified purchase
An uplifting addition to the super power that reigned through the 80's and into the early 90's. This season gives a refreshing twist to the humor which in other situations, may have run dry. The writers were able to build upon the character traits and idiosyncrasies which made the show famous.
See all reviews
Back to top
Get to Know Us
Make Money with Us
Amazon Payment Products
Let Us Help You
EnglishChoose a language for shopping. United StatesChoose a country/region for shopping.
© 1996-2022, Amazon.com, Inc. or its affiliates