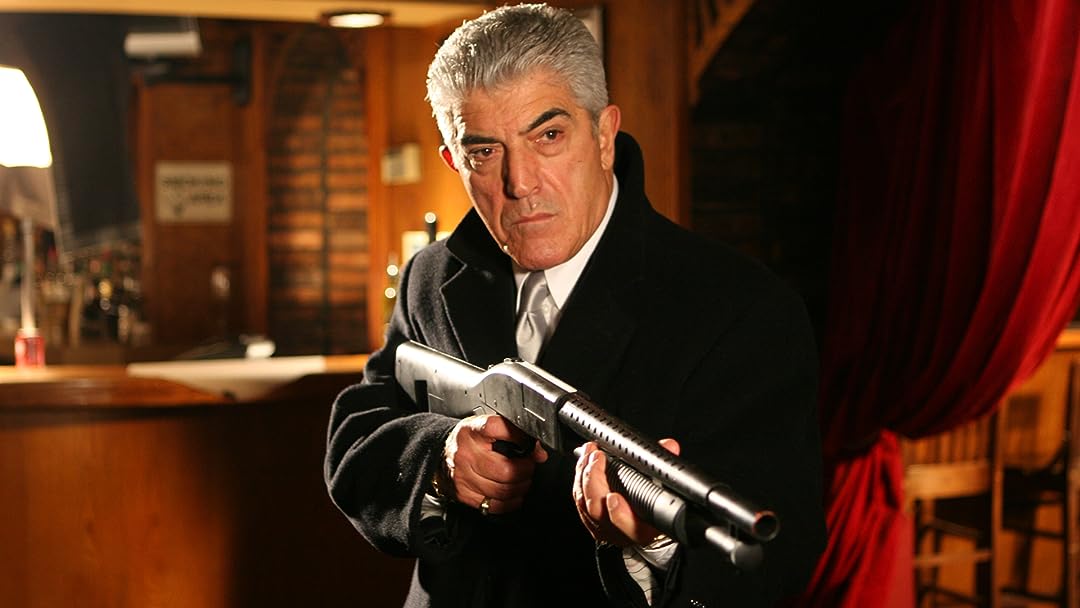 (456)6.01 h 34 min2019X-RayR
The fates of an aging hitman and a washed up detective become entwined when one last job leads to one last chance to settle an old score.

ValuemindedReviewed in the United States on February 16, 2020
5.0 out of 5 stars
Not all mobsters are good fellas
Verified purchase
Most mobster movies glorify criminals, so everybody ends up wanting to be Tony Soprano. But this movie does not do that. Instead, it is a gritty, realistic portrayal of what mob life is truly like. The film is narrated by the title character played by Frank Vincent, and done almost in a documentary style. It's the story of a loyal mob soldier, one no one in the family cares about any longer. The old mob boss is in jail under indictment, and the new boss is too busy stuffing his own pockets to give a damn about any of the older crew. Mobsters make such a big deal about the importance of family loyalty, but this movie exposes what a lie that is. The boss expects you to be loyal to him, but will throw your life away at the drop of a hat because loyalty only flows one way. There are no heroes here. These are true criminals: greedy, selfish and violent SOBs to the core, with zero redeeming qualities.
Vincent's character is one of the old crew, a career mobster strugglling to earn enough money to live under the new boss. He's also trying to keep his daughter and grandson out of trouble, because her wiseguy husband from a rival mob family is too busy snorting and sleeping around to care for them. Of course his new boss is more concerned with keeping the rival mob happy than helping Vincent take care of his family, and he gets warned off. Eventually, Vincent gets one last chance to redeem himself by fulfilling a contract, but things don't go as planned. Adding to his troubles, an old nemesis starts nosing around, a police detective nearing retirement. He's such a D bag that you wonder who's worse - the cops or the criminals. There 's plenty of action and excitement, along with a couple of interesting plot twists. I enjoyed the movie. You will too if you aren't expecting everyone to act like a bunch of good fellas.
7 people found this helpful

Yiannis PReviewed in the United States on October 19, 2016
5.0 out of 5 stars
A Good Bad Guy
Verified purchase
Quite a movie. The casting, directing, editing, and acting are all first rate. There is an authentic feel to this movie, partly explained by the fact that practically all the actors portraying Mafia types are truly Italian--and they look it. (Check the cast of characters at the ending credits. Italian names are a dime a dozen.) This is not a typical bad guys versus good guys story. There is plenty of blood shed by the protagonist, played magnificently by Frank Vincent, who is a good bad guy--a hitman with a heart. The ending might surprise you. It delighted me. 5 stars
23 people found this helpful

artgirl123Reviewed in the United States on April 3, 2020
4.0 out of 5 stars
Chicago Overcoat-Gangster Noir
Verified purchase
Having only seen Frank Vincent in The Sopranos, I was interested in seeing him in a different role, even if the movie is basically the same genre. I was pleasantly surprised.
Of course, being a Mob film, there are all of the same stereotypes one finds in any such film. In real life, stereotyping is abhorrent, and leads to ridiculous assumptions, unfounded fears, and sometimes even violence. However, just like any other genre of film, there are going to be certain elements in common. High school/coming of age films are a prime example.
In this film, it was refreshing to see Vincent as a person with a heart, in spite of being a criminal. Through the development of the film, we realize that he wasn't a great parent, but he has learned from his mistakes with his family. One large motivation for the character is making amends with his remaining family members, and trying to distance them from his troubles.
The film noir feeling throughout was quite enjoyable. For some reviewers, it made it feel "slow," but I didn't find that. For me, the somewhat slower pace with the film noir feeling provided for a bit more character development than many films give. It could have gone a bit deeper, for my taste, but that doesn't detract from the film overall. The film noir elements also serves to heighten the tension between characters, good vs. bad, and the decisions/actions of the characters.
Overall, Chicago Overcoat is neither The Godfather, nor The Maltese Falcon. Drawing from both genres, the film may well become a cult favorite.

Edward KerianReviewed in the United States on June 1, 2020
2.0 out of 5 stars
Lacking, lacking, lacking
Verified purchase
I give it 2 stars versus worse only because it does keep your interest from start to finish. But there is just something about it that seems really dumb. Like leaving his distinguishable gold watch with the old man at the scene of the murder. Also, suddenly, all these mafia thuds & killers are so easily foiled & caught by surprise by this one aging low level mobster. Why does the one friend & colleague who is burnted by the car cigarette lighter take so long to get a clear shot at Frank Vincent as he is occupied killing the car full of killers? Then the friend runs out of bullets standing right out in the open, joking around with him when its a kill or be killed type of moment. It also just seems the gun scenes are not very realistic. The thing with the flowers & using the Latino kid to buy them is also dumb. A professional killer would not take a chance where he could end up being ratted out by the youngster. The silliness of this movie is one piece of stupidity after another. Also, the alibi could have easily been uncovered as a fake when the dopy lady said they watched wheel of fortune & Jeopardy. Any detective with half a brain would have asked both of them in separate rooms what were some of the wheel of fortune puzzles? She might have known since maybe she did watch it, but he wasnt there to watch it and would have been stumped and it did not seen like she filled him in on it afterwards. Very amateurish mobster movie...but Frank Vincert is still enjoyable to some degree.
2 people found this helpful

Mister RadioReviewed in the United States on May 7, 2017
5.0 out of 5 stars
Realistic and gritty
Verified purchase
I loved this film as Frank Vincent did an incredible job, the camera shots and audio work were excellent and it definitely had a film noir quality to it which I related to immediately. Having spent time in Chicago years ago this movie gave me that same feeling I had when I first stood in the midst of Chicago's concrete canyons. The blues music track was just great. This film didn't have that Hollywood glitz thing which I hate. It was gritty and a character study as another reviewer stated. One of the best movies I have seen in a long time.
12 people found this helpful

Dennis P. AndersonReviewed in the United States on December 29, 2019
4.0 out of 5 stars
A FRESH LOOK AT AN OLD THEME
Verified purchase
I highly recommend this production. The directing is a cut above most crime dramas, and there is real content. Also impressive is the acting and the way the script keeps you wondering what is coming up next. I predict the young homicide detective has a big future in film. I live north of Chicago so I enjoyed seeing the many shots of the city, both day and night. Locations were found that have not been over-used like you see on "Chicago PD." Kudos to the producers of this independent feature. Their passion comes through loud and clear.
2 people found this helpful

Kevin B. ReynoldsReviewed in the United States on January 22, 2017
5.0 out of 5 stars
Outstanding
Verified purchase
I love this movie. It's a modern film noir but from the "bad" guys point of view. No Bogart detectives here.
This is the 6th time I have watched this movie, and I enjoy it every time.
This is a "respect the code" movie like you don't understand until you have seen this movie.
Everything is great about this movie. Watch it and enjoy it.
I'm 63 and I've seen a lot of movies. This is a good one. Watch, learn, and listen. This is a good movie.
Update: 2017-01-30. Okay, make that seven times. This movie is equal in depth to Clint Eastwood's Unforgiven. Really! Check it out.
3 people found this helpful

LauraReviewed in the United States on December 11, 2016
4.0 out of 5 stars
It was a dark and stormy night - really
Verified purchase
I got right into the moody, dangerous tension of the world the old-fashioned hit man and the detective inhabit. I felt about the characters exactly the way the story demanded, thanks to excellent acting and point-on casting choices.

The story compares and contrasts the the two of them on cultural principles that police and organized crime have in common -- family honor and loyalty to an idea that is bigger than self. The better man won. The lesser man ended up driven by a personal vendetta rather than honor, so he lost the moral battle as well as the professional battle.
8 people found this helpful
See all reviews
Back to top
Get to Know Us
Make Money with Us
Amazon Payment Products
Let Us Help You
EnglishChoose a language for shopping. United StatesChoose a country/region for shopping.
© 1996-2021, Amazon.com, Inc. or its affiliates